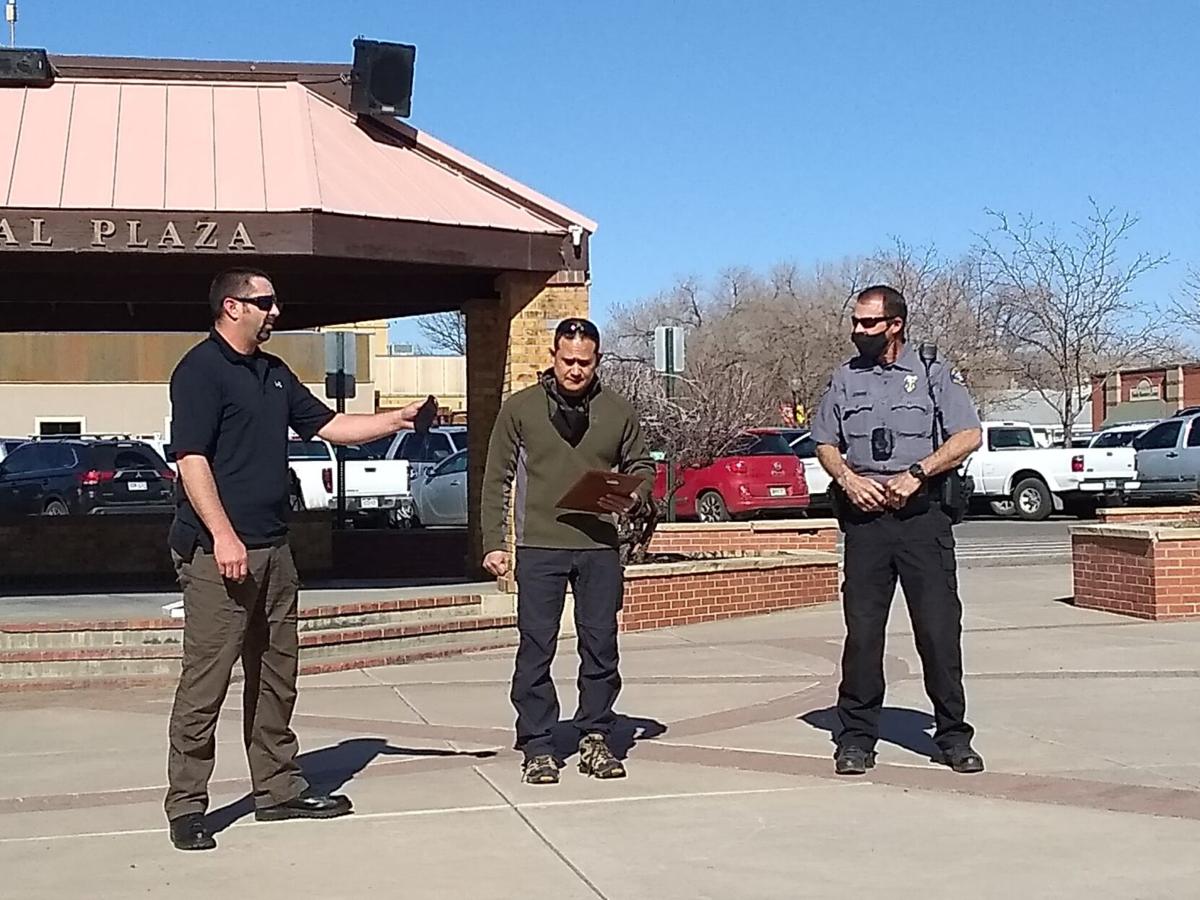 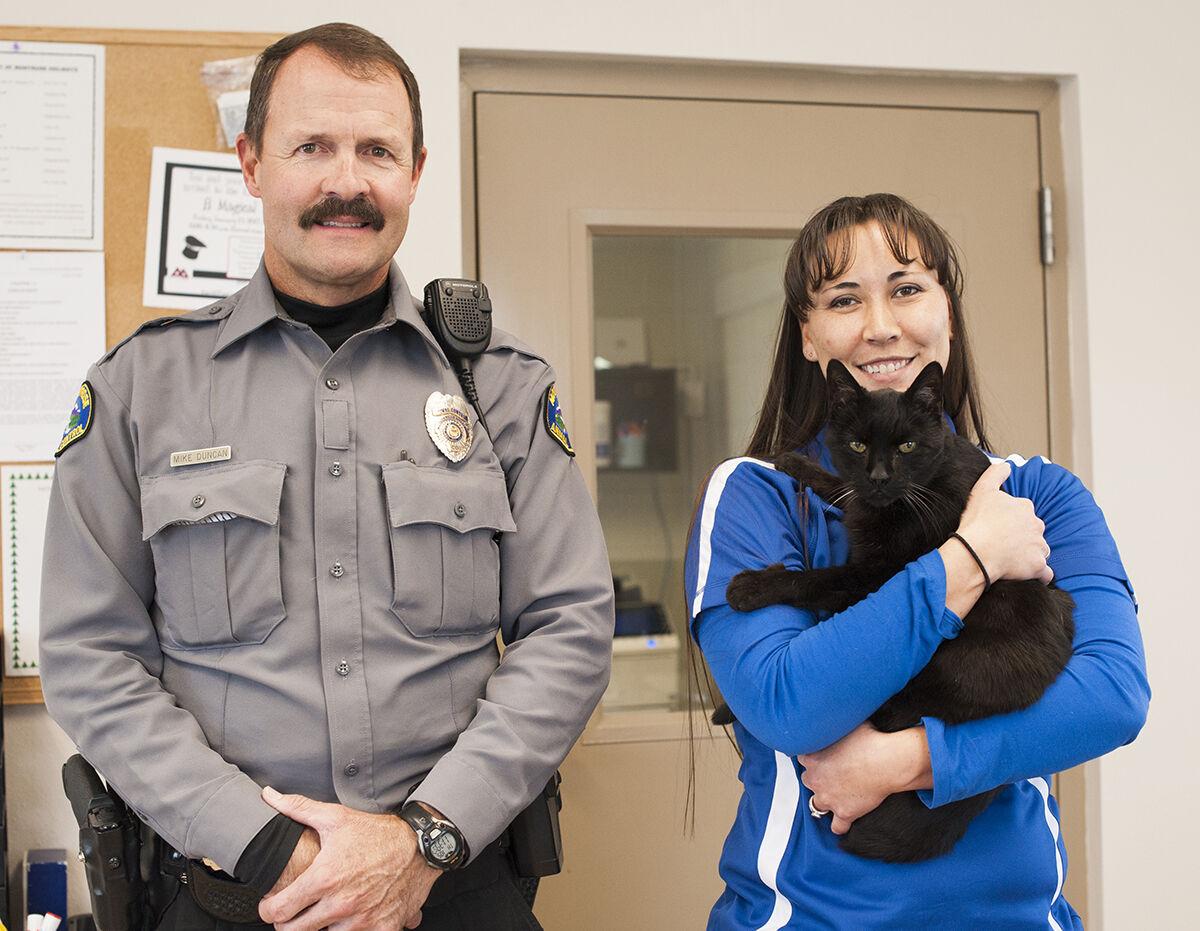 Mike Duncan, who retired from the Montrose Animal Shelter as its director Thursday after 23 years, stands with then-manager and new director, Kari Kishiyama in 2017, as she holds shelter mascot, Panther, since deceased. (Montrose Daily Press/file photo)

Mike Duncan, who retired from the Montrose Animal Shelter as its director Thursday after 23 years, stands with then-manager and new director, Kari Kishiyama in 2017, as she holds shelter mascot, Panther, since deceased. (Montrose Daily Press/file photo)

Faced with the prospect of moving to Denver when Colorado Ute Electric Association left town, Mike Duncan opted to stay right at home in Montrose, where he was born and raised, and translate his experience with animals to a new career.

Now, with nearly a quarter century gone, Duncan has retired as Animal Services director at the Montrose Animal Shelter.

“I worked for 16 years for Colorado Ute. They moved out of town and I didn’t want to live in Denver. I was still raising my boys,” Duncan said Friday, his first full day of retirement since coming to work for the city 23 years ago.

“I came from a farming and ranching background and I was also a hunting guide for about 10 years. All of that was animal-related.”

So, when an opening at the shelter was announced, Duncan applied and was hired.

In 2005, the shelter facility expanded, enabling Animal Services to become an adoption-only facility. At an adoption-only facility, healthy, adoptable animals are not euthanized. Instead, adoption is the focus and the shelter works through a regional network (Western Colorado Animal Resources Coalition) to transfer animals out to other facilities to boost their chances of finding a home.

“We changed a lot of the ways we did business,” Duncan said, telling of how euthanasia numbers dropped from a few hundred a year to a mere handful (for health, injury or extreme temperament issues).

The shift to adoption-only has bolstered community confidence in that people know if they have to relinquish an animal, it does not face a possible death sentence.

Further improvements include the addition of a surgical area where veterinarians can perform spay/neuter surgeries on shelter animals, as well as offer a regular low-cost, grant-supported spay/neuter clinic. (The city requires all animals adopted from the shelter to be sterilized.)

On the horizon, Duncan said, are customer-friendly cat pens that are an upgrade from the current cages; they should soon be on order. He expressed hope the shelter would one day have a cage-free cat sunroom for adoptions. The shelter currently has a room where kittens can romp and play out-of-cage.

The shelter has a big ally in Chow Down Pet Supply, which sponsors the police victim-support dog Apple, as well as the sheriff’s office K-9s, Tigo and Jocko. Through Chow Down’s donation program, people can contribute money for pet food that goes to the shelter.

“We hardly have to buy food any more. We get so many donations and it builds up our account,” Duncan said. “Those guys have just been really supportive of our whole town.”

Duncan headed the shelter when the COVID-19 pandemic struck. The shelter shifted to appointment-only adoptions and at first, its inventory of available pets dropped.

“We gradually gained animals and were not able to adopt out due to the no-contact order. By the time that was lifted, we had a fair amount of animals and they were adopted quickly,” said Duncan.

He also noted progress on the animal control side of the Montrose Animal Shelter’s duties. Animal control officers received more equipment for safety, better uniforms and vehicle upgrades through the Montrose Police Department, which oversees the shelter.

A few years back, the city’s animal ordinances pertaining to issues such as noise, dangerous animals and the leash law got a revamp.

Another boon was having a city attorney assigned to Animal Services, Duncan said.

“It was just such a huge asset to have an attorney advise us and work with people that have been charged with different violations. That made a really big improvement,” he said.

“We have had such incredible support from our command staff. It has enabled both the animal shelter and animal control to be at a leading edge with any agency in the state,” Duncan said.

“When you go from (being seen as) the dog pound with dog catchers to the animal shelter that we have and the professionalism in our officers today, it just makes me really proud of the progress we’ve been able to make over my career.”

Blaine Hall, now Montrose police chief, started with the police department within about a year of Duncan’s employment. Hall, with other police and animal shelter staff on Thursday treated Duncan to a barbecue and send-off, complete with the presentation of a commemorative plaque and badge.

“He’s committed his career and and passion for animals to the Montrose citizens for the last 23 years. I think having served 23 years with one organization not only shows the dedication and commitment to your job, but also it shows loyalty, which I think is something that is hard to come by these days,” Hall said Friday.

“It really means you believe in what you’re doing. He was amazing at his job and in ensuring citizens were served in relation to protection of animals, that they found proper homes, that they were cared for and were safe. We’re really going to miss him.”

Hall said that in his memory, the animal shelter has never scored less than 100 on state audits.

“A lot of people don’t realize what it takes to manage an organization like that,” Hall said, referencing rules, procedures and regulatory agencies.

He and Duncan have confidence in Duncan’s replacement, Kari Kishiyama, who has been with the shelter for about 17 years and was shelter manager before stepping into the director’s role.

“She’s going to do an amazing job out there. She already does,” Duncan said.

“I look forward to seeing more great things. … I don’t think she (Kishiyama) is going to skip a beat.”

For Duncan, a new boat that needs some wearing out, a family cabin by Buckhorn and his small ranch and hobby farm await — along with more time to spend with his wife, Kim.

“I’m going to do a lot of fishing, hunting and camping. I’m very blessed to have a wife who loves to do all that stuff with me,” Duncan said.

He thanked the Montrose community for its overall support of law enforcement and the shelter.

“As an officer, when I walk around town, there is hardly a day that goes by that someone doesn’t say how much they appreciate what we do and support us.

“That’s so encouraging in these crazy times, to have that level of support from our town,” Duncan said.

“I think the city of Montrose also knows how our community values its animals, especially when they are being harmed, or are in danger, or are lost,” Hall said.

“The folks out there dedicate a lot of time and commitment to the jobs that they do. As a result, we have a top-notch facility.”