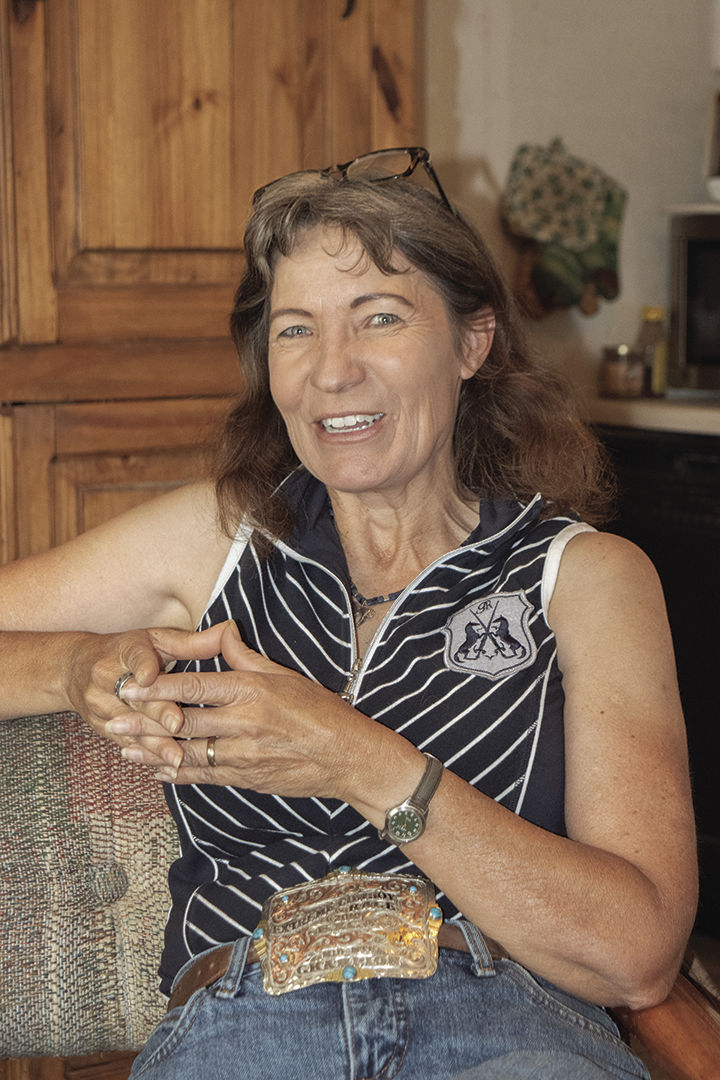 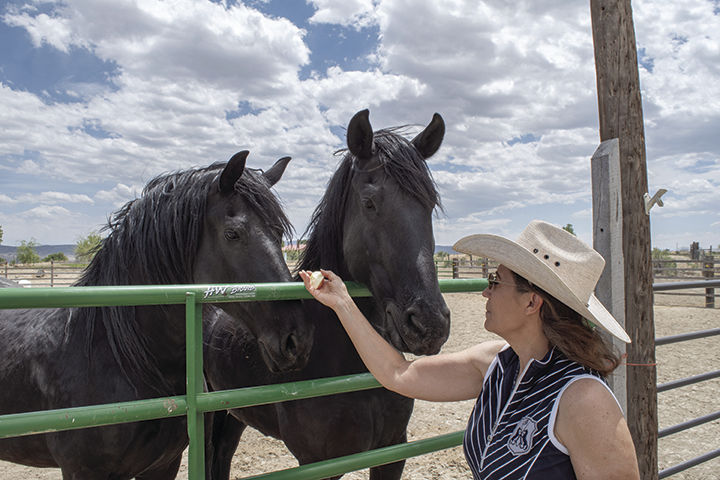 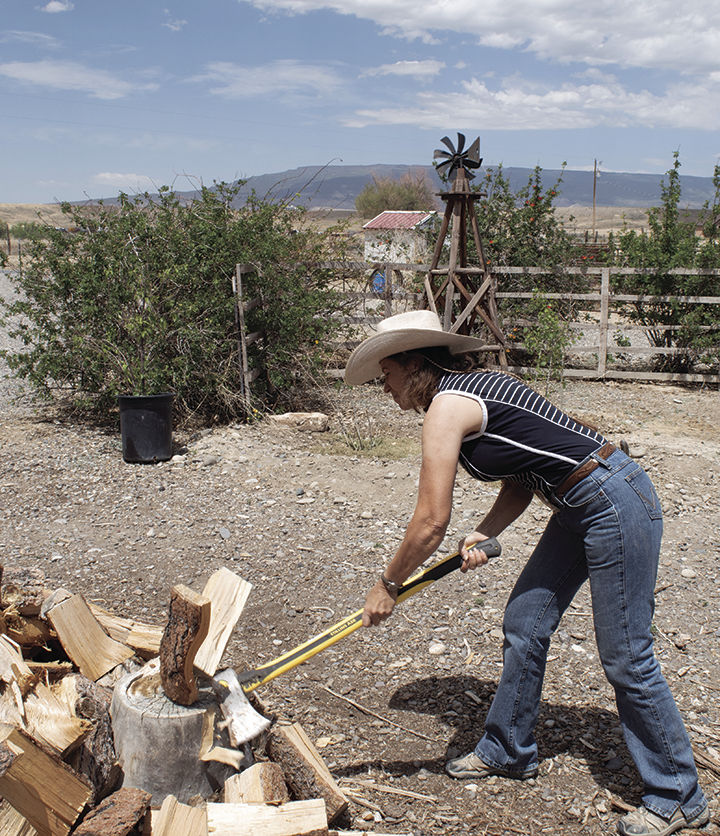 Bonnie’s Zumba Class — Bonnie Brown uses about a cord and a half of firewood every winter, which gets split by the lady, herself, during the rest of the year.

On the way out the door, Bonnie Brown grabs a sheathed knife off the kitchen table and then an apple out of the nearby refrigerator. As we head outside, she cuts a wedge of apple — the fruit is her lunch. Well, at least part of it is hers. The rest will go to a five-year-old Friesian stallion named Ranger, who is Bonnie’s current horse project. Other apple munchers include her burro, Biscuit; two mini-horses, Tamale and Taquito; her Friesian draft team, Mojito and Habanero; and two other equine pals, Ruby, a strawberry roan, and Peso, a gray foundation quarter horse. The chicken taking a shower in the yard sprinkler didn’t seem interested in anything but the cool water, as spring continues to warm things up on the mesas, southeast of Delta.

Brown, now 53, has been on this five-plus acres piece of Colorado for 23 years. She was raised in southwest New Mexico, where her father was a livestock manager. The family came to Delta when she was 12. They were cattle folks. Even though the family was in agriculture, those were the days when youngsters had parental blessings to look on the other side of the fence. Brown said she drifted away from ranch life.

“I ended up getting a degree in geology. I cowboyed myself through college,” she said. “I ended up doing a lot of different things. I worked in the hospital, I cleaned dog pens, scooped poop, or whatever I needed to do to make a living.”

Twenty years ago, she heard that the director of the Wool Growers Association was resigning, telling her the Colorado sheep people would be looking for someone to manage their association.

“I read the job description and said to myself, I can do that job,” said the lady wearing a buckle the size of a tea saucer that attests to the variety of her experiences. She was an Extreme Cowboy Horse Racing Champion in 2010. Anyway, she got the job. All that experience and her smiling, erudite presence must have impressed the Association board.

“They called me before I even got home from Denver and offered me the job,” she said. The circle was complete. She was back on the ranch. Now two decades later, she still feels blessed. “I am a happy lady. I am blessed to be working in agriculture again and with great people like the sheep and wool folks,” she said.

Brown is a busy lady with her stock, a small orchard of fruit trees, and her day job(s), executive director of the Colorado Wool Growers Association, Colorado Sheep & Wool Authority, and the Colorado Lamb Council. Right after our chat, she would log into a national conference call to discuss the USDA measures to help the sheep industry, which has been damaged immensely by the COVID-19 disaster. Brown is on the road, in the air, on the phone, or on video conferencing calls almost constantly.

This is an intense time for people in the livestock business. “We’ve got a lot of issues to deal with right now,” she said. “We’ve got the wolf problem, Forest Service and BLM permits, the pandemic. The market is a mess, prices are down, labor needs attention.”

How does the virus affect the sheep business?

Colorado is a critical factor in the U.S. sheep industry. “We are the largest lamb feeder in the country, we are third in total breeding sheep and lambs, and fourth in wool producing,” Brown said. Up for grabs right now is the CARES act funding to aid the lamb and wool industry. The pandemic problem exacerbated the lamb and wool market crisis, which puts in danger not only the individual producers, but the huge $32 million investment of three families in northeast Colorado. The group is in the final stages of opening the biggest lamb processing center in the country.

Marketing lamb, during this virus crisis, has become much more difficult.

“The biggest part of our lamb meat sales is to restaurants,” Brown explains. With the restaurants shuttered in the Covid lockdown, lamb sales are in the dumper. Seems that home cooks are intimidated by lamb. “They like to eat it, if someone else prepares it,” Brown says.

That conundrum leads Brown to the favorite part of her job, as director of the Colorado Sheep and Wool Authority. The Authority includes the mandatory sheep check off program. The program mirrors what is being done by the Beef Council with their successful Check Off effort. There is a dba entity called the Colorado Lamb Council which deals primarily with the Colorado culinary industry.

“One of the things we’re doing is teaching people about alternative cuts of lamb meat.” says Brown. A lamb carcass is more than chops and high-end roasts. Once consumers learn more about it, lamb becomes a viable and affordable, and less intimidating, protein source.

“I really enjoy working with the chefs and food scientists. It is a fun part of my job,” she says.

On any given day, you can find Brown at the capitol in Denver or even Washington. She deals with regulation, legislation, USDA programs and community relations.

“The sheep business tends to be a little smaller as commodity groups go, so I have to keep them from getting lost in the noise,” said the voice of the Colorado sheepherders who operates out of an office in her farmhouse a few miles west of Delta. But, she didn’t always run the show from that spot.

“When I first started with the Wool Growers, they wanted me to be in Denver the majority of the time. I didn’t enjoy that,” said Brown. She finally convinced the board to allow her to set up camp on her land in Delta. “They eventually bought me a construction office trailer, which saved them a lot of money with me not commuting and being closer to a lot of the producers.”

Life was good. Until one morning, three years ago.

“One Monday, I went out to the office to check my messages,” Brown recalled. When she opened the door, there was smoke and heat rolling out, then the interior became nothing but flames.

“When I called the Board that morning, they asked how things were going and I told them it was hot here.” Brown recalled. “They said, ‘wow, you must be really busy’. I replied, ‘no, it really is hot, the office is on fire’.”

She says that the insurance company hired an arson investigator. He found that an electrical cord had rubbed itself bare on the edge of her wooden desk. The subsequent arcing started a smoldering fire that erupted when she opened the door.

Rather than get a new trailer, Brown moved her office into the farmhouse.

If you mention the wolf reintroduction plan to Brown, you are talking to someone who has been in the trenches a long time. Yes, the wool growers are very much opposed to the idea of putting wolves in the San Juan Mountains.

Despite all the arguments, Brown sees it coming down to a simple matter of real estate and proximity.

“I think it is all about habitat,” she stated. “People see Colorado as this big open state. But the habitat is broken down into small spaces.” Brown said that the wolves, who are dangerous to livestock and people, will be placed in areas where they are not isolated from anything.

Brown said that a lot of folks have made up their minds, but there are a lot of “swing” voters who could make a difference in the election outcome.

“I am trying to use a sort of gentle persuasion to help people understand all sides of the issue. I am cautiously optimistic about our side winning this fight,” Brown says quietly.

One more thing, and it’s one that most of us didn’t see coming.

“There are way too many wild horses in the West,” Brown says bluntly. The Walt Disney effect oversold the romantic appeal of wild horses, has allowed the wild herds to grow to almost 100,000 animals. They roam public lands mostly, but are often found in trespass on private lands, where landowners have no way to deal with them. The BLM has responsibility for managing the herds. Culling by any method anymore is pretty much a no-go, since Congress has passed legislation that does not allow killing, neutering or, in some cases, even adoption. Although the adoption program has been around for a long time, it has had little or no effect.

“The problem is the horses compete with wildlife and other livestock for forage and water,” says Brown. In recent days, the BLM has announced a possible solution in a fertility control program using a vaccine called the Oocyte Growth Factor (OGF), which, when administered to a mare, causes her to be infertile for up to three years.

Meanwhile, back at the Brown outfit, when the conference calls are done, and the reporters have left the farm, and a few dozen emails get read and answered, Bonnie Brown will saddle up Ranger, or put the harnesses on Mojito and Habanero, and head out for an evening ride.