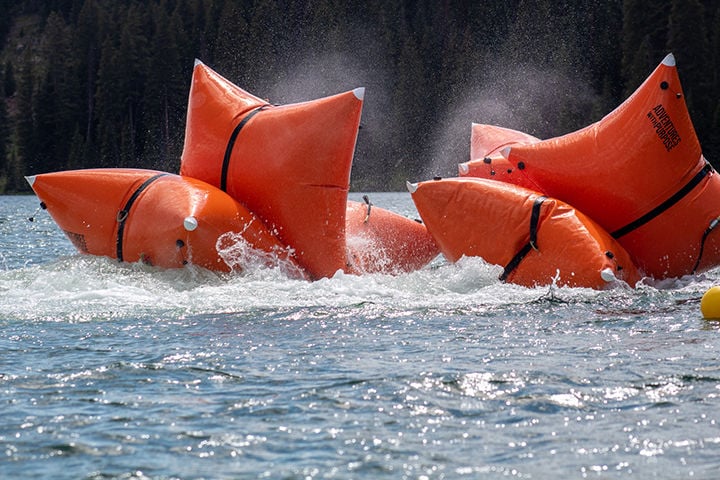 Something’s gone wrong. As the straps fail, the lift bags detach from the Snow-Cat and rocket to the surface, taking a diver up with it very quickly. 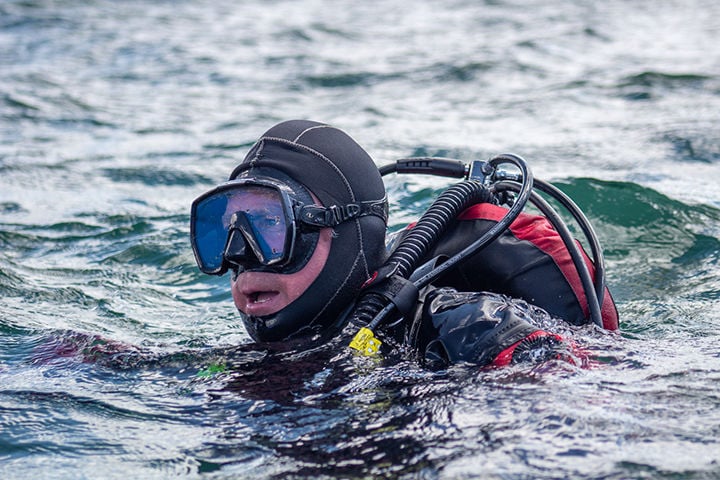 A diver comes up for a break after managing the connections of the lift bags to the Sno-Cat about 70 feet underwater. 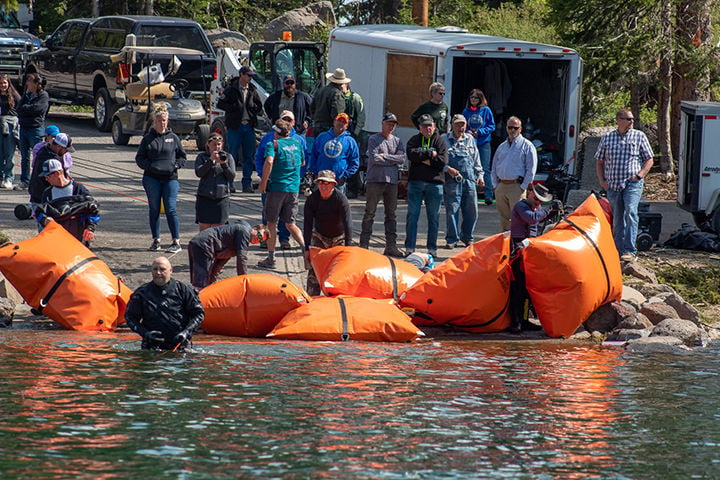 Adventures with Purpose crew work to inflate lift bags as the team attempts to unstick the Sno-Cat from the lake’s bottom.

Something’s gone wrong. As the straps fail, the lift bags detach from the Snow-Cat and rocket to the surface, taking a diver up with it very quickly.

A diver comes up for a break after managing the connections of the lift bags to the Sno-Cat about 70 feet underwater.

Adventures with Purpose crew work to inflate lift bags as the team attempts to unstick the Sno-Cat from the lake’s bottom.

The U.S. Forest Service attempted it through the volunteer extraction team, Adventures With Purpose, whose members spent three days attempting to raise the Sno-Cat that plunged through the ice on Island Lake in early 2019, carrying Ryan Wells and Ricky Colton to their deaths.

The efforts were an attempt to “bring a close to this tragic chapter on the Grand Mesa,” Grand Valley District Ranger Bill Edwards said.

Although the efforts ultimately were unsuccessful, it wasn’t for lack of trying. The team will be back later this year for a second go, Adventures With Purpose founder Jared Leisek said.

“We have not given up. There was a bit of chatter around the boat ramp that, ‘We’ll never see those boys again,’ but we’re not the type to give up. We have a mission and we’re going to finish it,” he said Thursday.

Adventures With Purpose arrived at Island Lake Monday and conducted exploratory dives. Tuesday came the grunt work: attaching large, bright orange air bags to the snow machine and using the air pumped into them to lift the Sno-Cat.

Of course, it wasn’t so simple.

The machine’s tracks were buried in the soft, silty lake bottom, making it heavier, and creating suction. Although the Sno-Cat weighs 15,000 pounds, the team needed 20,000 to 25,000 pounds of pressure to lift it, Leisek said.

The depth and altitude dictated the amount of time divers could spend beneath the surface — 75 feet down, at roughly 11,000 feet elevation made the dives the equivalent of 110 feet, Leisek also said.

And then, as the Sno-Cat was surfacing, straps holding some of the airbags frayed and disconnected after rubbing against the machine’s frame. The bags slammed together and were damaged, reducing the weight they were capable of lifting.

Divers reattached the bags with chains.

“They started making some headway and a couple straps broke loose,” Delta County Sheriff Mark Taylor said. “Seven of the bags came to the surface. Four of the bags remained on the Sno-Cat. By that time, it was late in the evening (Tuesday).”

By pushing the remaining bags to the limit, the Sno-Cat began coming up again. “We did get it to the surface again, but we had so many holes in the bags, we couldn’t keep the air flowing fast enough,” Leisek said.

The team exhausted the equipment it had available and had to make the call Wednesday to pull back. Leisek said he intends to return in September with a new strategy, based on what was learned. It appears as though the team can attach two, larger bags and float the Sno-Cat to the surface in one go, he said.

“They gave it three really good attempts. They had to reassess,” Edwards said.

The Forest Service had considered whether to raise the Sno-Cat, and determined it would do little harm to the lake if it stayed put, he said.

“We looked at that early on. Any pollutants in that machine would have been diluted,” Edwards said, adding that downstream use is for irrigation, not municipal water supply.

However, when Adventures With Purpose reached out, the Forest Service found the group’s proposal reasonable, he said.

“We’re in a position that we’re able to come out and do something like this at no cost,” Leisek said.

Adventures With Purpose pulls in revenue associated with 15 million viewers on YouTube and Facebook, and from donations.

The group began a few years ago, with divers pulling trash from rivers; it also extracts automobiles. Members now receive several emails a day, asking for help locating missing people in water, or retrieving bodies, including those of homicide victims.

“It’s not just about getting a Sno-Cat out, but the cold cases we work on. … As our network continues to grow, how do we really fine-tune this so it becomes a movement?” Leisek said.

Going to Island Lake afforded training for team veterans and beginners — “We continue to learn, we continue to get better,” he said.

Also: “It’s not the standard car. How many people can say they are part of a dive team that went to a mountain lake to retrieve a Sno-Cat that was 75-feet deep?”

Leisek said family members of the two deceased men were supportive. When Adventures With Purpose is able to bring up the Sno-Cat, the families will be given some time alone to look at it and perhaps have some feeling of resolution, he said.

“At the end of the day, we love doing what we do, when it comes to helping families,” Leisek said.

Edwards said he was pleased with the professionalism and skill of the dive team. “This entire operation was gratis. All the divers were volunteers, all the support was volunteer. From that aspect, it was really a benefit to the taxpayer,” he said.

Edwards also thanked the Grand Mesa Lodge for providing rooms and boats, and as well thanked Delta County Search and Rescue and all who were involved in the recovery attempt.

“It was a great team effort and unfortunately, it just didn’t quite work out yet,” he said.

More about Adventures With Purpose can be found on its YouTube channel.