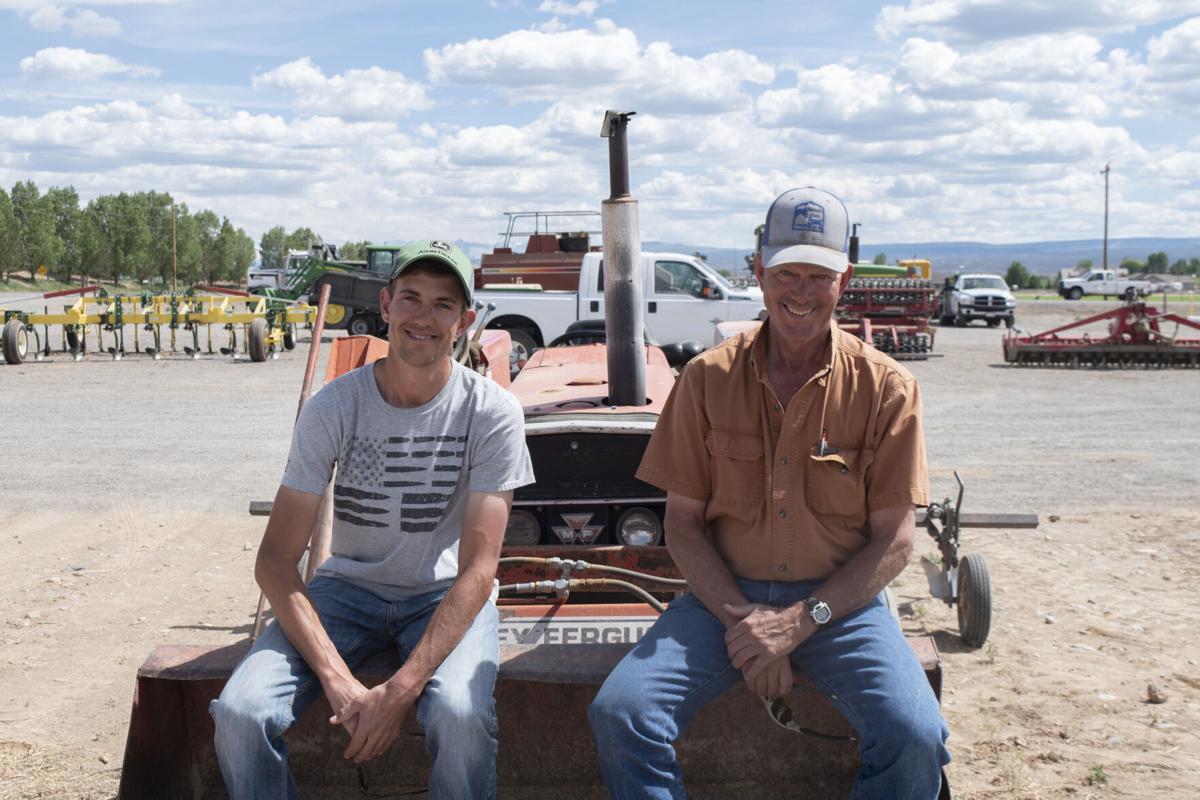 Brody Flowers, 26, sits next to his father, Doug, on the bucket of a Massey Ferguson tractor that was the first tractor on the Flowers Farms. The pair was named Farmers of the Year by the Shavano Conservation District. (Michael Cox/Special to the Montrose Daily Press) 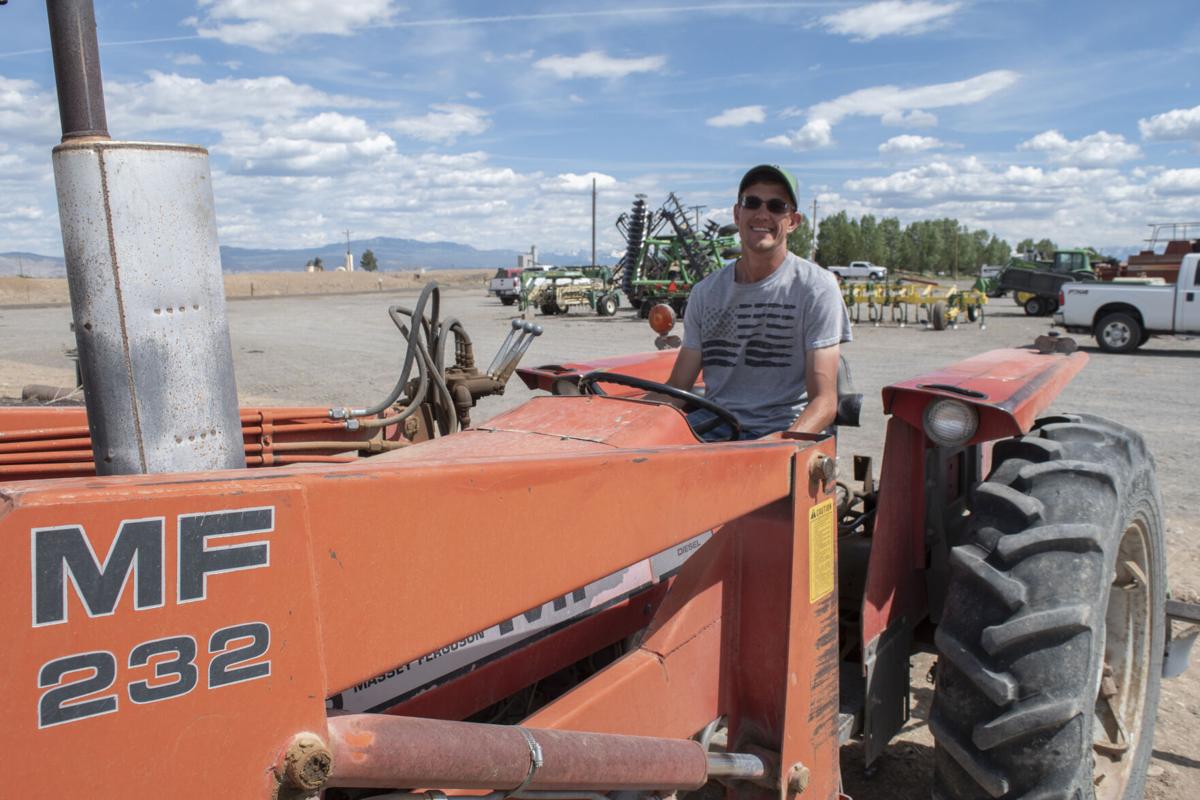 Brody Flowers sits aboard the tractor that is twice his age. The 46-horsepower machine was the first piece of equipment he and Doug Flowers bought when the father and son began their modern farming operation. Brody says that he can’t recall exactly when he first drove the tractor. (Michael Cox/Special to the Montrose Daily Press) 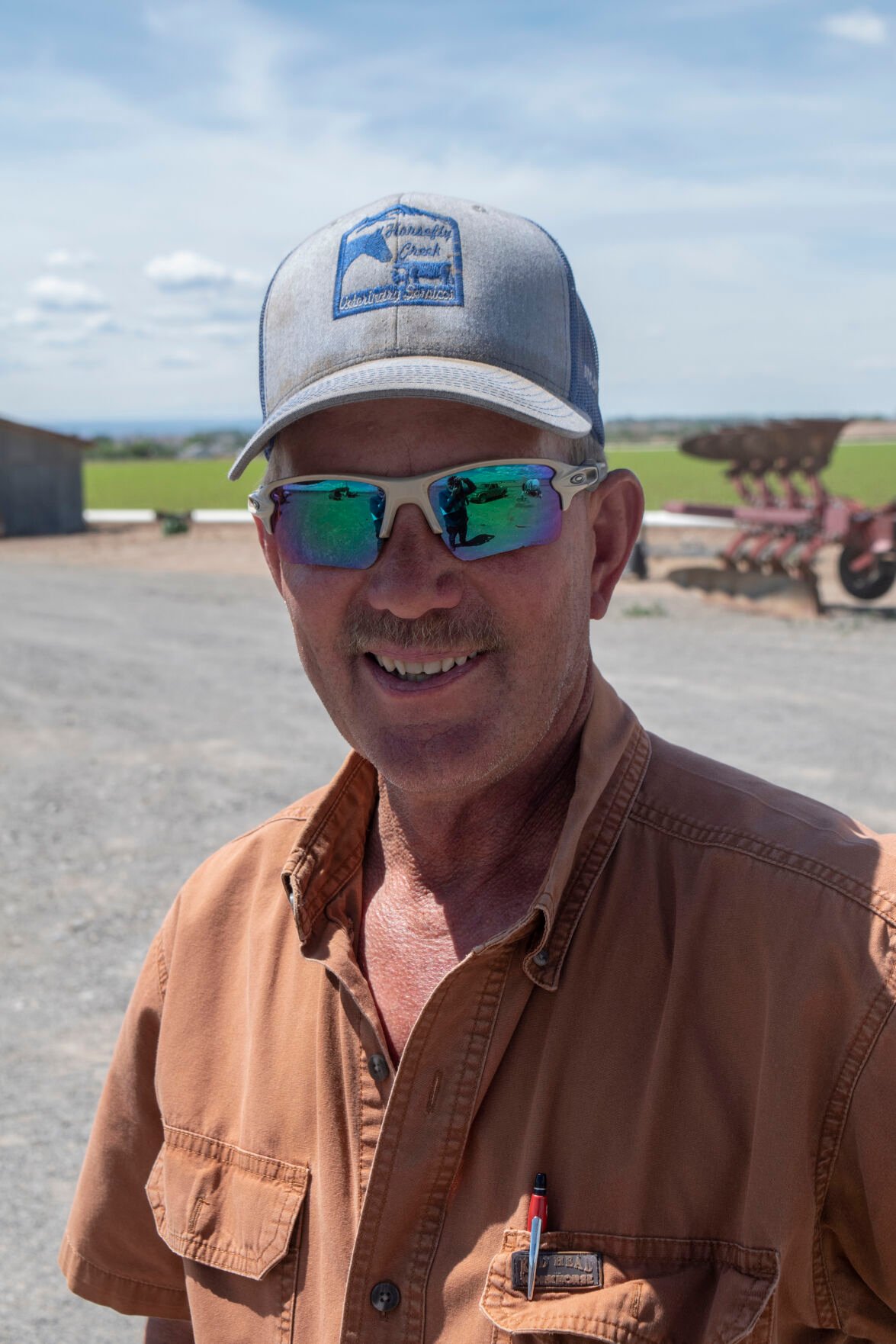 Doug Flowers, 57, has lived his entire life in the Uncompahgre River Valley. He runs Flowers Excavation, a hunter outfitter service, and the Flowers Farms. He is the son of the late Harold Flowers, a successful rancher in the area. (Michael Cox/Special to the Montrose Daily Press)

Brody Flowers, 26, sits next to his father, Doug, on the bucket of a Massey Ferguson tractor that was the first tractor on the Flowers Farms. The pair was named Farmers of the Year by the Shavano Conservation District. (Michael Cox/Special to the Montrose Daily Press)

Brody Flowers sits aboard the tractor that is twice his age. The 46-horsepower machine was the first piece of equipment he and Doug Flowers bought when the father and son began their modern farming operation. Brody says that he can’t recall exactly when he first drove the tractor. (Michael Cox/Special to the Montrose Daily Press)

Doug Flowers, 57, has lived his entire life in the Uncompahgre River Valley. He runs Flowers Excavation, a hunter outfitter service, and the Flowers Farms. He is the son of the late Harold Flowers, a successful rancher in the area. (Michael Cox/Special to the Montrose Daily Press)

Harold Flowers would be proud. Flowers, who died in 1985, was the quintessential cowman.

“There weren’t any ATV’s or other machines,” says 57-year-old Doug Flowers, who could probably wear the same size jeans that he had on when he graduated from Montrose High School about 40 years ago. So, Doug grew up on a horse, running cows.

“Dad insisted on doing everything the old way, when it came to cows. So, I grew up riding and roping, growing hay, and moving cows back and forth between summer and winter range” says the guy, who, along with his son, Brody, will be honored mid-month by the Shavano Conservation District as their Farmers of the Year.

The Flowers’ livestock outfit stretched from the land on the Uncompahgre Plateau that is now the Cornerstone Club, hopscotching all the way to Gunnison River.

“We had about 1,100 pairs in a cow calf operation. We grew all of our own feed,” says Flowers. The outfit also had an extensive horse herd that was a huge part of the lives of the family. Horses and roping – team roping to be exact – are what Doug Flowers turns to for fun, that is, when he has time for it. There are still 35 horses in the Flowers’ family inventory.

When the senior Flowers passed, the family held a large auction, selling off most of the ranch assets. Doug by that time had a successful guiding business and soon grew a second business in excavation and earth-moving operation. Doug’s son, Brody, was born in 1995. By the time he was 18, he was a genuine up-early, work-late, sweat-‘til-you-bleed farmer.

“This whole farmer of the year thing is his fault,” Doug says with a chuckle. He was happy with his excavation and guiding business. He was living on the family homestead on the river south of Montrose. “I was living in the house that I grew up in,” he says.

Near the homestead was a plot of land owned by the banker Ron Holman. Holman was looking for someone to farm the land. Brody raised his hand, and the Flowers family was back in farming.

“That was eight years ago. I had built a good business, I owed nothing,” Flowers says. “Now we’re still moving dirt, selling gravel, guiding hunters, and now farming 1,100 acres.” Brody matches Dad step for step and sometimes he takes the lead. “I couldn’t have a better partner.” As he describes his life, a string of Flowers gravel trucks rumble by, hauling rock to multiple destinations.

The pair has a variety of crops from beans to sweet corn. Alfalfa hay is a big deal. Wednesday (yesterday) saw them taking the first cutting from their hay fields. Hay growers know that grass is a big water user. But the Flowers’ use of water was the primary thing that netted them the conservation district honor.

“I have never seen anybody who could make a foot of water go as far as they do,” says Jerry Allen of the USDA’s Natural Resources Conservation Service (NRCS). Allen and others nominated the Flowers duo for the Shavano award, which will be presented at the pandemic-delayed annual meeting and barbecue. The event will be held June 14 at the Elks Clubs in Montrose.

Ask Doug Flowers how he stretches his water, and he defers. “My irrigation crew is mostly responsible,” says Flowers. “Those guys don’t let anything go to waste. They watch every drop.”

Once the water is turned on to a field, an experienced irrigator watches the absorption and the movement. The water manager also looks at the plants themselves. It is not only important to water the crop, but it is important not to overwater. With a water intensive crop like alfalfa hay, you can kill the hay by leaving the water on too long,” says Flowers.

While the irrigator’s eyes and actions are important, the Flowers Farms set them up to succeed by not wasting water on its way to the furrows.

“We have replaced thousands of feet of open ditches, which is where you can lose a lot of water,” says Doug as he points out a gated delivery pipe that is fed by a leakless underground pipe system. Open ditches cost farmers (and entities such as the Uncompahgre Valley Water Users Association) a lot of water in three basic ways. One is by evaporation, two by seepage and three by the plant life that develops in and along the canals, laterals and delivery ditches.

Doug and Brody have experimented with some other innovations, like no-till farming. “We have done a couple of fields and it seems to work,” Doug says.

We asked Doug if he took the bait on the hemp thing? “Yeah, I spent $3,800 cash to put a field in hemp,” he says. He lost the cash, but more than that, “We lost the productivity of that land for that season,” he says. Lesson learned.

Doug’s phone dings and he scans the daily corn prices. “They’re up again today,” he says, as we look over 100 quarter mile-long rows of sweet corn, which has already been contracted. It was also payday, which meant Flowers was taking the time to personally hand out the paychecks as we met with different employees. Nice touch in this day of digital everything.

The Flowers will be honored on June 14, along with the Shavano Conservation District Rancher of the Year, Daris Jutten, whose livestock business dates back three generations. Also to be honored will be the Educator of the Year, Nora Hammer, a fifth-grade teacher at Northside Elementary school.

Lowell King, an innovative farmer from Fruita, will be the keynote speaker. King has been experimenting with carbon sequestration and soil building and has received accolades for his work.

“King does regenerative farming better than about anyone, with his double cropping and extensive use of cover crops and mob grazing cattle,” says NRCS’s Jerry Allen. The title of King’s talk is Solutions to Problems with Regenerative Agriculture.

The event begins at 6:30 p.m. and the barbecue will be catered by Rib City Grill.