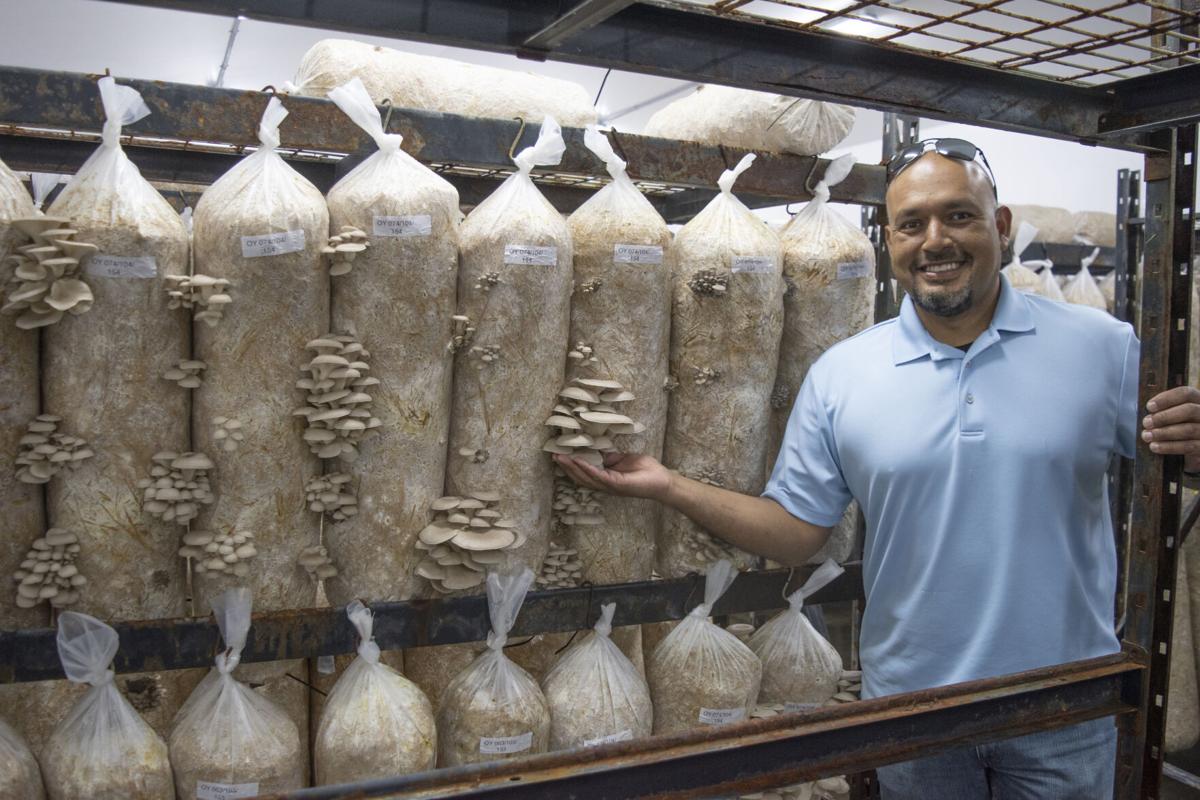 Giovanni Mendoza, chief operating officer for South River Aquaponics, shows off some of the Alpenglow mushroom crop in one of the growing rooms of the Montrose organic farming operation. (Photo by Michael Cox) 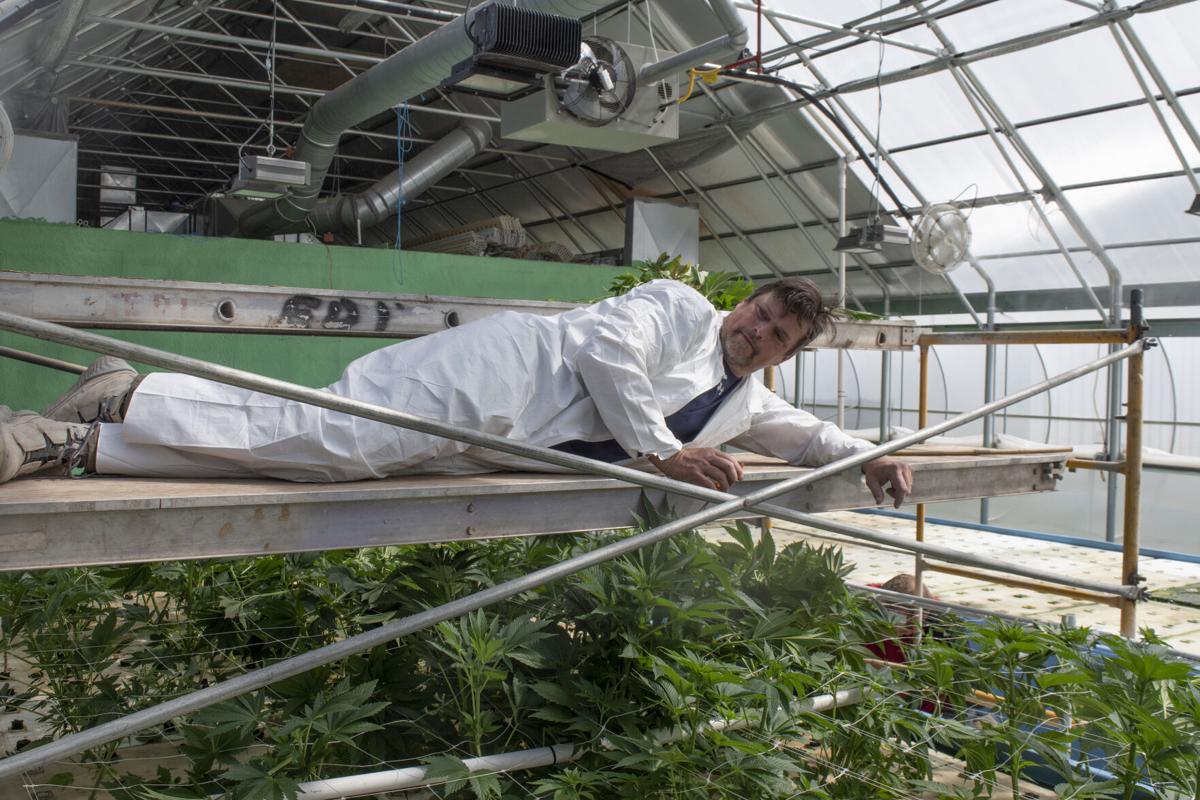 Ryan Eakes of Typhoon Pharma is supposed to be lying down on the job. He is tending to hard-to-reach bedding hemp plants from a suspended platform at South River Aquaponics. The farm conducts seed research and provides greenhouse-grown bedding plants to growers in the area. (Photo by Michael Cox)

Giovanni Mendoza, chief operating officer for South River Aquaponics, shows off some of the Alpenglow mushroom crop in one of the growing rooms of the Montrose organic farming operation. (Photo by Michael Cox)

Ryan Eakes of Typhoon Pharma is supposed to be lying down on the job. He is tending to hard-to-reach bedding hemp plants from a suspended platform at South River Aquaponics. The farm conducts seed research and provides greenhouse-grown bedding plants to growers in the area. (Photo by Michael Cox)

David Gann used to grow trout, which was a sustainable venture. Now, he still grows fish, tilapia and freshwater lobsters, which are an integral part of the highly sustainable South River Aquaponics (SRA) operation on a bend in the Umcompahgre River, just south of Montrose. SRA is a growing asset in the food production arena on the Western Slope.

Gann is the chief science officer for South River. His pedigree is as long as the river that runs by the 67 acres on which the SRA labs and greenhouses sit. Some of you may remember Gann as a Montrose County commissioner and chairman of the Tri-County Public Lands. These days, joined by Peter Ullman, chief executive officer at SRA, and Giovanni Mendoza, chief operations officer, and 14 other employees, Gann and the team run a thriving aquaponics business. The products that produce the cashflow for SRA include Alpenglow mushrooms, organic herbs, hemp seed, bedding plants, and mushroom extracts and honey sold under the Mycomatrix (MYCO) brand.

Ullman is a master chef, who graduated from Le Cordon Bleu in 2012. One of his passions is fulfilling the need for high quality ingredients in gourmet foods. He comes to SRA from The Phoenician Resort, a highly acclaimed property in Arizona.

Mendoza is a native of El Salvador who moved to the San Francisco area in 1995. Mendoza has a bachelor’s degree in business administration and is a former police officer. Aquaponics has become a passion and his mission is to tell the world about it.

If you’ve eaten mushrooms at establishments like Remington’s at The Bridges, you have most likely had an Alpenglow mushroom or two. Bridges Chef Devon Myrick uses the shitaake, lion’s mane and oyster mushrooms in many of his dishes.

So how do you grow a mushroom? You don’t plant seeds; mushrooms come from spores on other mushrooms. It starts microscopically.

“We extract the spores from a mushroom and move them to a petri dish, which contains nutrients,” Gann said, holding one up. “There, the spores of a mushroom develop their mycelium, which are the stringy-looking vegetive part of the fungus – in case you had forgotten – mushrooms are fungi. The mycelium is really nothing more than the nutrient-gathering network for the tiny developing mushroom. “

As the mycelium and the mushroom fruit body develop in the cozy warmth of the dish, the Alpenglow crew set about developing the medium in which the culture will be placed to eventually become full-blown mushrooms.

But if the straw contains something that could compete for nutrition with the mycelium culture, either the mushrooms will not grow or not as many will develop.

“So, we sterilize the straw,” says Gann, as we approach a young man carefully extracting steaming straw from an autoclave-like device. The straw and oyster mushroom culture are placed together in plastic bags and then hung in the temperature and light-controlled growing room, where several days later the bags are covered with perfect, organically grown mushrooms.

Shitaake mushrooms, which grow in Asia on damp wood, are cultured by SRA in composite wood chip logs.

The 14,000 square foot greenhouse at SRA is where the team begins its season developing a better breed of hemp plant and generating bedding plants for many of the hemp growers in the area. By late spring, however, you will see, not hemp, but thousands of herb plants growing in a sort of closed circuit system that has come to be known as aquaponics. The term comes from the words aquaculture (pertaining to raising fish) and hydroponics (referring to the non-soil method of growing plants).

The high sustainability comes from the fact that the aquaponics system is a constantly recycling loop. In SRA’s case, six tanks full of water, tilapia, and freshwater lobsters create waste. The water is given to microbes and worms, who convert the waste to fertilizer, which feeds the plants. The plants filter the water, send it back to the fish and the cycle starts again. Gann says that about 500 gallons of water feeds the whole system for the greenhouse. Lost water is replaced by water from a well on the property.

Incidentally, the tilapia, an African panfish, start life as fingerlings in the tanks. They eventually become marketable fish. The sweet-tasting fish fetch a good market price.

And the sustainability rolls on.