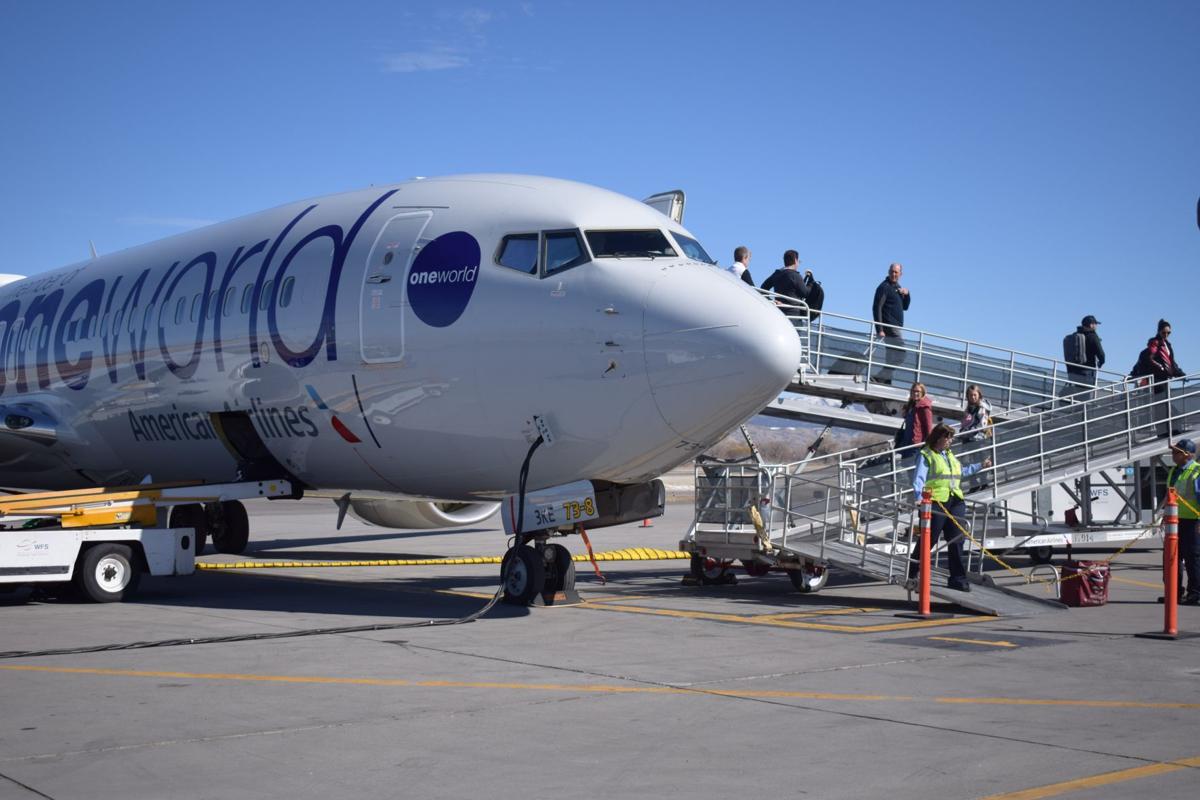 Passengers disembark from an American Airlines flight Friday afternoon at Montrose Regional Airport, where arriving and departing passenger numbers are again up. 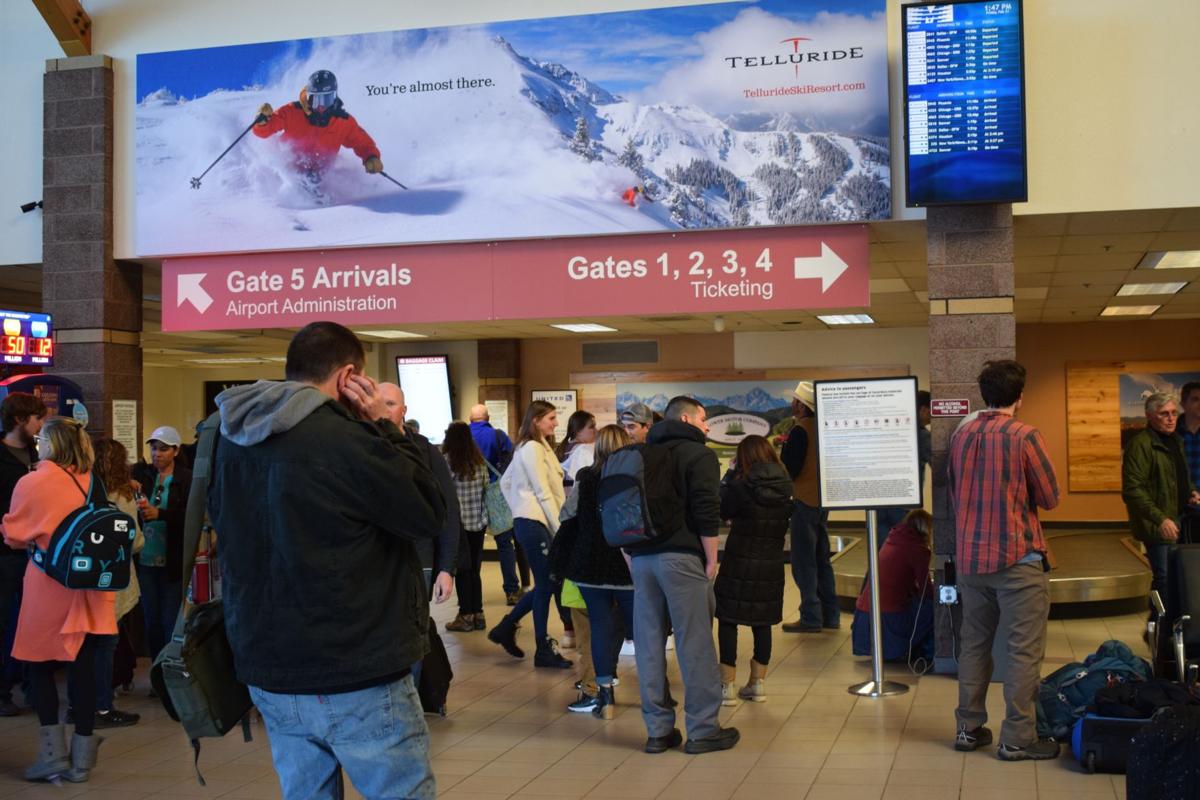 Passengers disembark from an American Airlines flight Friday afternoon at Montrose Regional Airport, where arriving and departing passenger numbers are again up.

Montrose Regional Airport, a main economic engine for the area, is firing on all pistons, according to a five-year study recently released by the Colorado Department of Transportation.

CDOT’s Aeronautics Division releases a Colorado Aviation Economic Impact Study roughly every five years. During the most recent study period of 2013-2018, Montrose Regional provided an overall economic impact of about $627.46 million, based on a payroll of more than $111.3 million (from 2,850 direct and indirect jobs); value-added economic productivity of aviation-related businesses measured at $188.9 million, and business revenues exceeding $327.26 million.

“It always has been. A community with a commercial airport has a great advantage over communities that don’t. That plays in our favor in the region. It’s the strength of our community. It’s just one more of those shining gems that helps us be the community that we are.”

The state has examined the economic contribution of its airports every five years since 1996. For the 2018 report released on Feb. 20, it assessed Colorado’s 70 public-use airports, finding an increased economic impact of 30 percent in the five-year study period. Collectively, these airports supported $48.6 billion in business revenues, more than 345,000 jobs and $16.2 billion in payroll.

The most current study has more specifically defined regional economies and provided “value-added” as an additional impact measure.

Montrose is part of Region 10 and designated “Central Western Slope,” along with Delta, Gunnison, Hinsdale, Ouray and San Miguel counties.

Value-added means the level of added value that each on- and off-airport business analyzed in the study contributed, in addition to the value of goods and services those businesses purchase.

Montrose Regional Airport’s economic output has soared, compared to data from CDOT’s prior report, published in 2012. In that earlier report, the payroll based on direct and indirect jobs was $77.4 million (from 2,035 direct and indirect jobs) and business revenues were $221.7 million. This report did not assess the value-added component, which is a recent addition to study metrics.

“The increased economic impact of airports in Colorado underscores the importance and value of aviation statewide,” said CDOT Aeronautics Director David Ulane, in a provided statement.

“Under the direction of the Colorado Aeronautical Board, the Division of Aeronautics is proud to support Colorado’s airports and our aviation system as part of our state’s robust multi-modal transportation network.”

“We’re up 8.7 percent (overall). Our close competitor (Grand Junction) is down 0.66 percent,” Arnold said, reiterating that the most recent calendar year reflected in the CDOT report is 2018.

“We’re up even more in 2019. For 2019, we’ve had a significant increase,” he also said, adding that he does not know other airports’ statistics for last year.

The airport terminal is rapidly running out of elbow room, despite a southward expansion some years ago. A new master plan was completed and the airport is now going through a design process for further expansion.

“We anticipate the 100 percent design will be completed by July of 2021 and that we’ll request bids and hopefully have new terminal construction underway by September of 2021,” Arnold said.

The expansion project, estimated to cost $20 million, will add about 30,000 square feet to the terminal. Expansion will most likely take place toward the north, although it is still in preliminary design phase.

Public update meetings will be scheduled as the project moves forward.

“We’re happy with the growth. We believe we’re going to continue to grow and after the terminal expansion, we’ll look into the future at that time, but probably start working on a Phase 2 expansion, which will most likely put a second story on the east side of the current terminal,” Arnold said.

The airport is also working with CDOT to see what kind of controlled access is possible for traffic turning into and out of the airport parking area from Townsend Avenue. Currently, there is no traffic signal, and a lefthand turn from the airport requires vehicles to cross two lanes of northbound traffic on the busy thoroughfare. Arnold said meetings with CDOT are forthcoming and although there is a definite need for controlled entrance and exit to and from the airport, officials are just beginning to explore what that might look like.

What is drawing people to book flights through Montrose Regional Airport? Arnold credits both the Colorado Flight Alliance, which guarantees to commercial carriers a certain number of paid seats, and other entities advertising Montrose.

“There is a significant amount of advertising by the Colorado Flight Alliance. The city is advertising more. The Western Slope of Colorado as a whole is becoming more popular and there are many things that drive demographics of people in this area,” Arnold said.

He pointed to the Feb. 20 annual regional economic forecast held in Montrose, which predicted more growth.

“Overall, at the economic forecast, the economists anticipated the Western Slope of Colorado is going to continue to grow. The lion’s share of that is driving the demand through the Colorado Flights Alliance for this particular area for people to fly into. They do a significant amount of research and advertising. I think we’ve seen positive effects from that,” Arnold said.

What’s good for the airport is good for Montrose and the region, which benefits from the 2,850 jobs CDOT found the facility supports.

“There is a multiplier effect and turnover based on the number of jobs we have at the airport and the amount we’re creating through the economy and the region,” Arnold said.

Head also dusted off CDOT’s 2008 airport economic impact report, saying those numbers compared with the most recent report show Montrose has climbed back to where it was pre-recession.

On the whole, the 2018 airport economic impact report is only slightly below the numbers in 2008’s, she also said. Head, too, pointed to the recent economic forecast and CMU economist Nathan Perry’s statements during his keynote address.

“This report reiterates what Nathan Perry was saying, that we are back to where we were in 2008. Our airport is basically tracking the same (as in 2008); our average salaries are paying more, and it’s a good thing,” Head said.

She also hailed the $20 million terminal expansion as an economic push she said will open the door for more flights.

Without a commercial airport, Montrose would look very different.

“The airport is the No. 1 economic driver in this region,” Arnold said. “It’s definitely a benefit for Montrose. I think we have room to expand and I think in the future, we will be able to increase the number of airlines we have coming into and out of Montrose.

“Right now, we need to meet the needs by expanding our facility.”