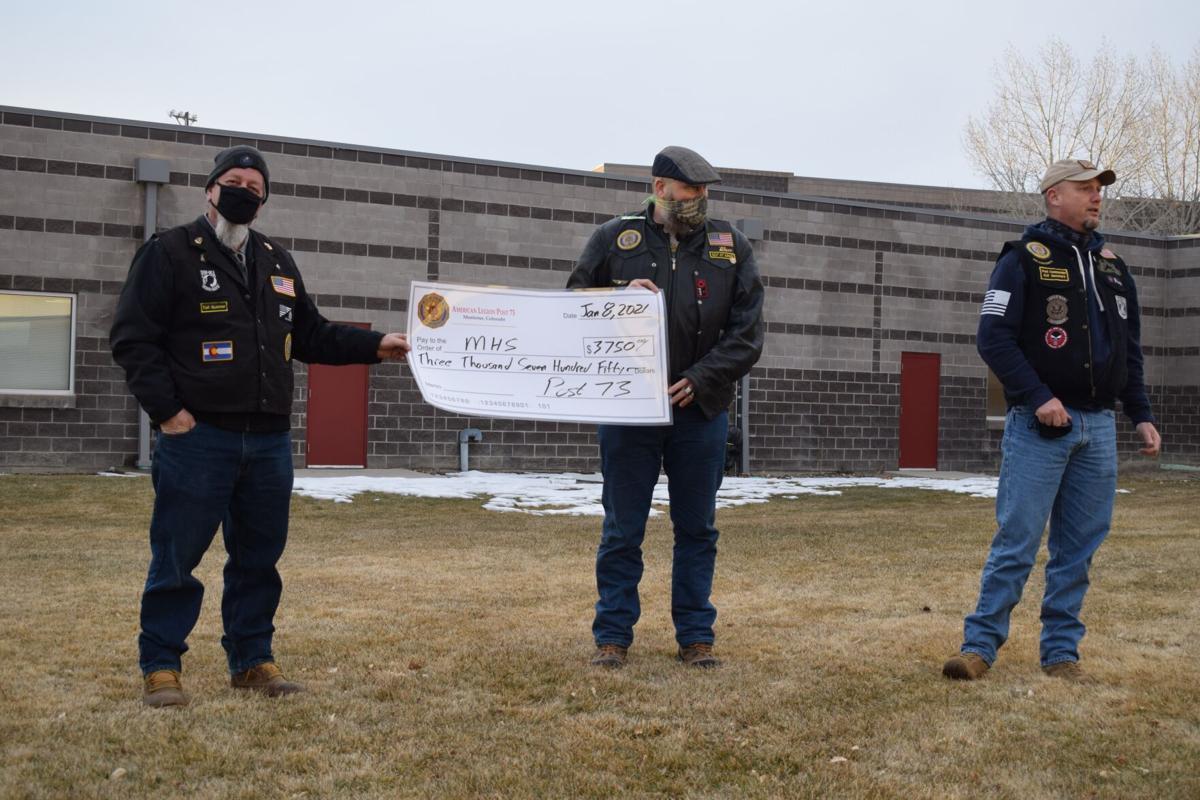 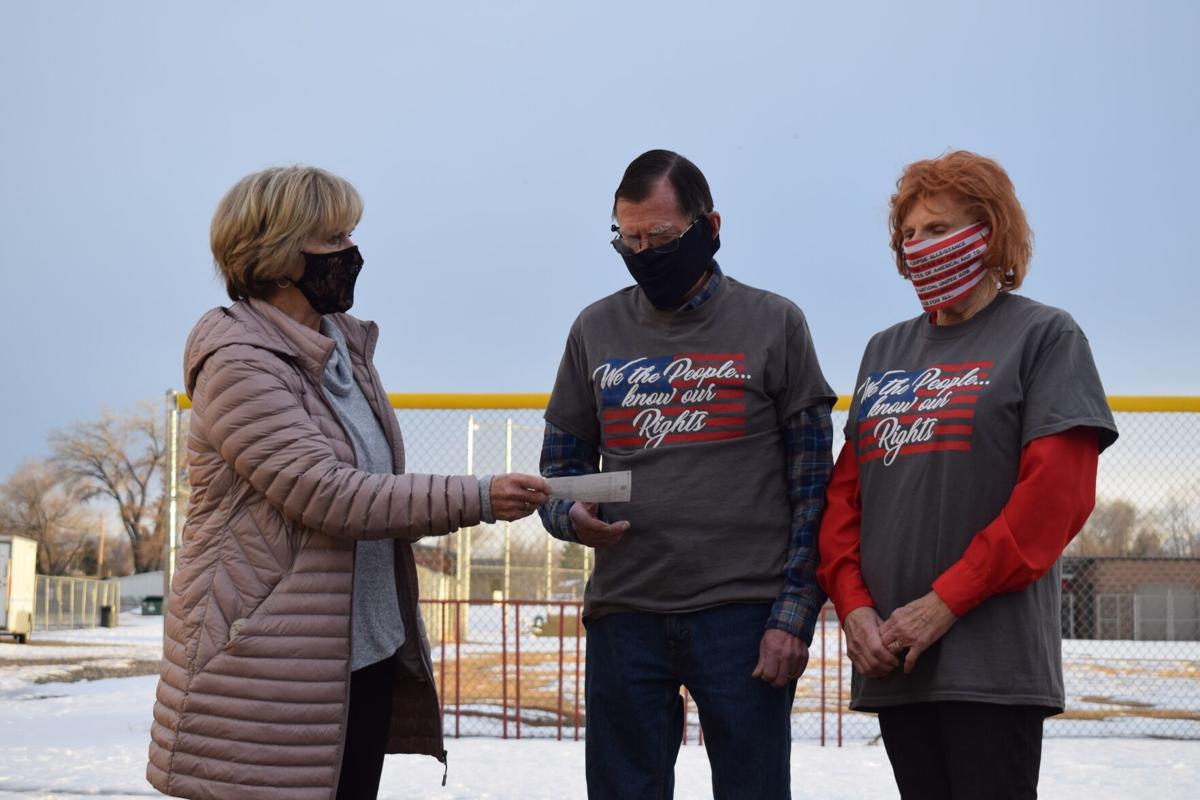 Cat Fellabaum hands a $750 check to Jim and Karla Waltz, co-leaders of the Constitution Club at Montrose High School. 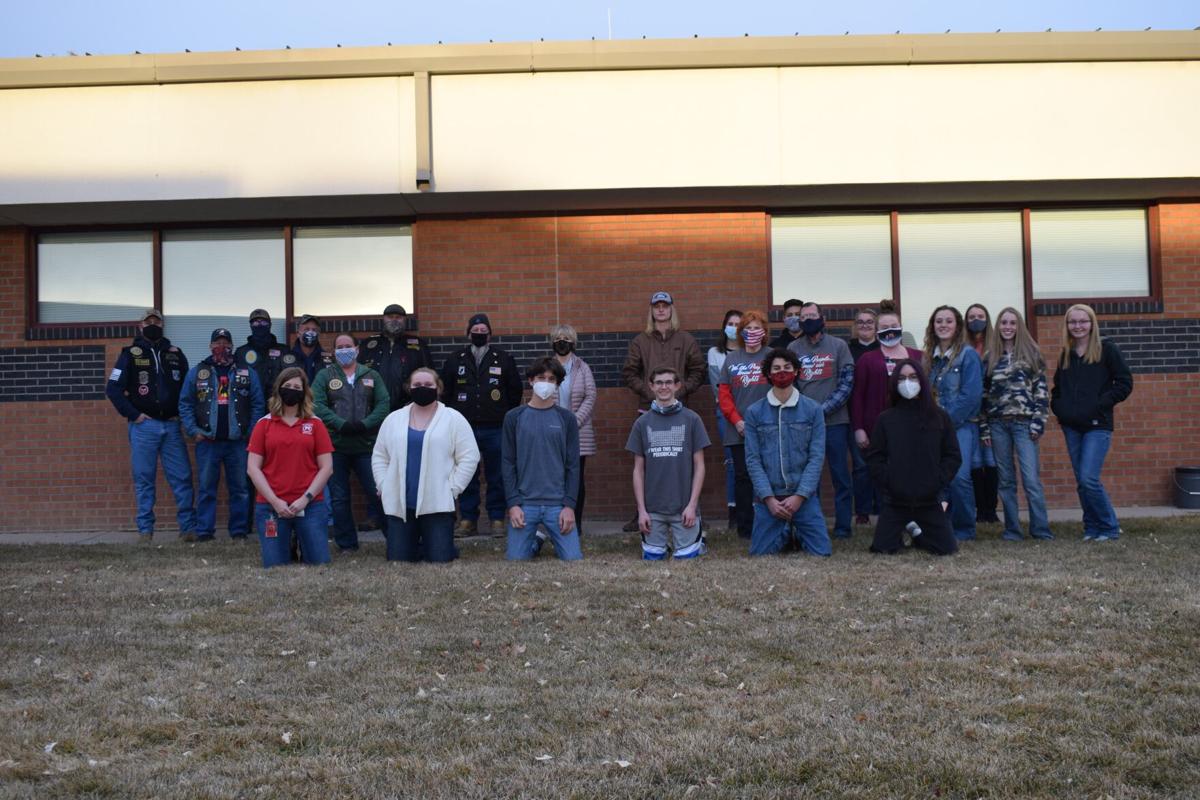 Members of American Legion Riders Post 43 pose for a photo with MHS program leaders and students at Montrose High School on Friday, Jan. 8, 2021.

Cat Fellabaum hands a $750 check to Jim and Karla Waltz, co-leaders of the Constitution Club at Montrose High School.

Members of American Legion Riders Post 43 pose for a photo with MHS program leaders and students at Montrose High School on Friday, Jan. 8, 2021.

Students from all three programs were present during a brief ceremony at MHS in which Post 73 Commander Jeremy Rousseau, President John Boughton and other organization members handed checks to program leaders.

“It’s all well deserved,” Rousseau said as he addressed the recipients. “We just want to thank you for being a part of your community, and being a part of things like band, FFA and Constitution Club. Those are things that teach you life skills and get you prepared for the real world.”

All three programs have navigated their own set of challenges the past several months during the pandemic. MHS band, in particular, has had to navigate restrictions issued by the pandemic by using bell covers and playing masks.

The school has helped some, MHS Band Director Sheridan Loyd said, and the donation can help keep the program going strong as it awaits a future return to normal performances and fundraising opportunities.

“It’s so well needed right now because we’re not able to fundraise because all of our fundraisers are super hands on and performance based,” Loyd said. “... it’s been really challenging so this is so needed right now.”

The Constitution Club doesn’t have an independent source of income, club co-leader Jim Waltz said. The club’s mission is to educate and inform students on the Constitution and its background, and how it pertains to today.

With the donation, the club will have funds for supplies, reference materials, booklets and its biggest expense, lunches, for the students.

“We only live on donations, and this is a very generous donation. We are so excited about it. It’s wonderful that they’re doing it for us,” said Karla Waltz, also a club co-leader.

The donation for the MHS programs and its students is the latest supportive act from Post 73, which donated to community organizations throughout 2020.

Rousseau praised the American Legion’s role in lending support, and offered insight to the members’ approach to organizations and people in the community.

“We all joined the military for different reasons,” Rousseau said. “Some of us join for the college benefits, others join because you feel that strong tie to join the military. But I think we all did it because we had some sense of service because we wanted to give back to our country.

“No longer being in the military, we can’t do that but we still want to give. It’s still a service oriented type of thing that we can do. This is just one way that we can do it — raise funds and then give that to deserving people within the community, such as the high school or other veterans and veteran organizations.”

Other members of the donating committee from Post 73 were Daniel and Beth Hamilton, Cat Fellabaum, Patty and Paul Kilgore and Josh Rousseau.

“We’re super thankful to the American Legion for thinking of us and wanting to support our students because they work so hard,” Loyd said.