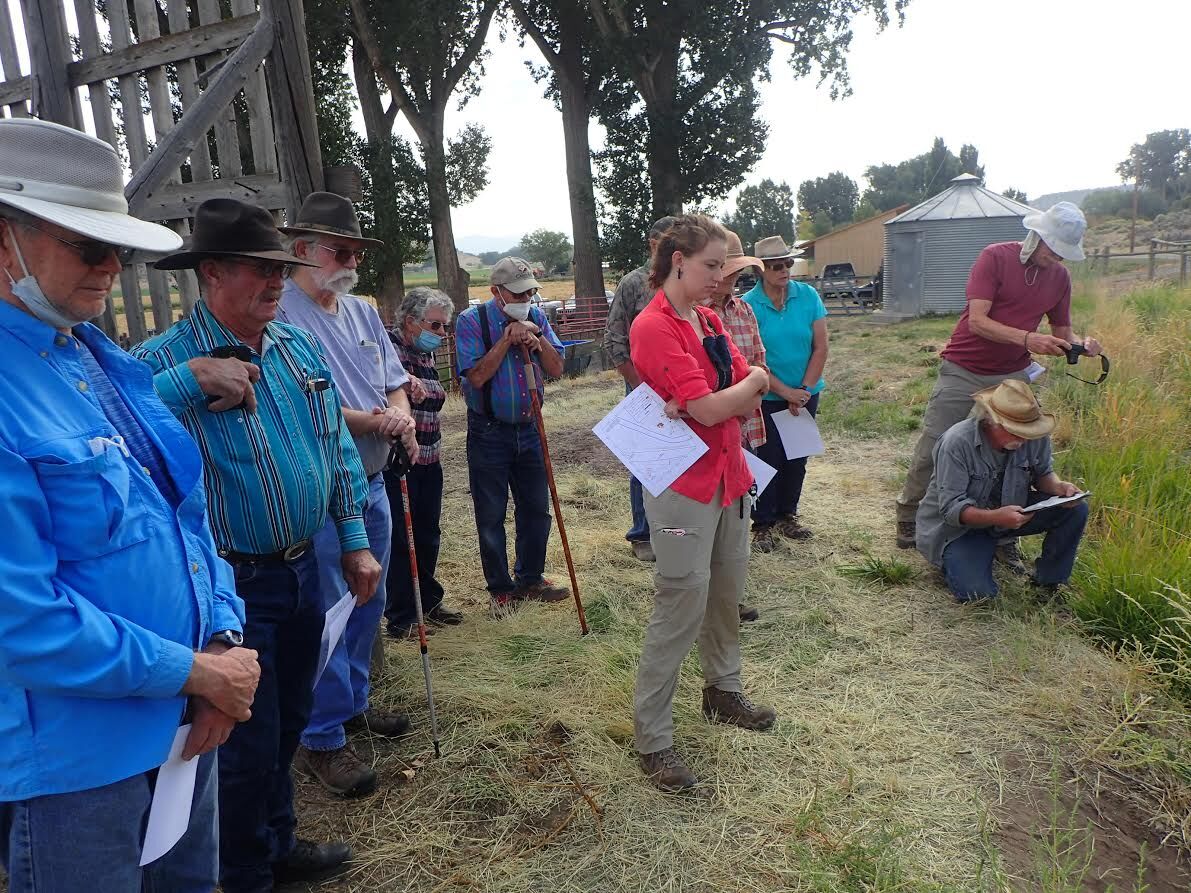 Researchers gather on private property in the Shavano Valley to conduct site work at the location of previous excavations. 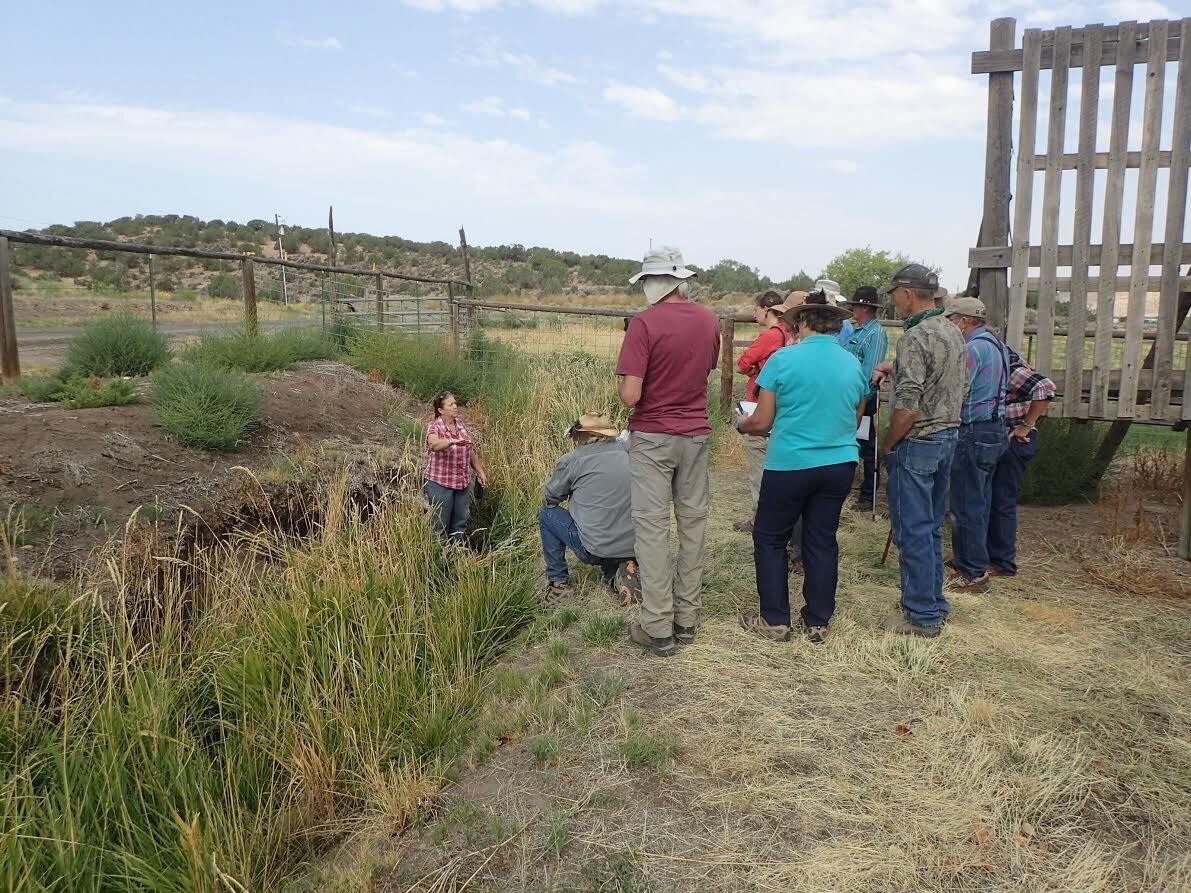 Researchers cluster around an irrigation ditch in the Shavano Valley, where stratigraphy the ditch revealed points to evidence of prehistoric occupation.

Researchers gather on private property in the Shavano Valley to conduct site work at the location of previous excavations.

Researchers cluster around an irrigation ditch in the Shavano Valley, where stratigraphy the ditch revealed points to evidence of prehistoric occupation.

Sites that have gone unexamined since the 1950s and 60s could yield more information about Shavano Valley’s prehistory and Dominguez Archaeological Research Group is paving the way for a possible new excavation.

The Grand Junction-based researchers are using state grant funding to conduct a site analysis on private property in Shavano Valley.

“It’s called an assessment grant and the purpose is to evaluate and develop research design for future work,” said Michael Berry, a contract employee for the research group, which is also known as DARG.

Depending on how things at the site go, DARG could apply for a competitive grant for actual excavation.

The field and laboratory research now being done in Shavano Valley follows extensive excavation there during the 1960s and early 70s.

The DARG researchers also conducted an overview of prehistory of the Uncompahgre Plateau — published earlier year — drawing on the museum collections and archives from that excavation, but used modern techniques and analytics to revise the results of this previous site work.

This research, published in the quarterly journal of the Colorado Archaeological Society, “Southwestern Lore,” contained Berry’s projectile point chronology and chronometry for the Uncompahgre Plateau Project.

That project set out with an initial objective of reassessing the Uncompahgre Complex, as it had been defined by Marie Wormington and Robert Lister in the 1950s, followed by William Buckles in 1971.

During research for that project, it became clear that one site, called the Shavano Spring site, contains more information than had been looked at during past decades.

Berry said that in data logs from the time, Buckles expressed regrets that he did not have more time — and funding — to look more at the spring site.

“It’s pretty clear, in terms of the number of projectile points and artifacts, it was just as important as any site out there,” Berry said.

In the time since the original excavations, someone cut an irrigation ditch through part of the Shavano sites — but this proved to be somewhat of a benefit.

“It actually allowed us to look at the stratigraphy in detail, the various levels of deposition in the site. It’s quite deep. We’re looking forward to expanding that if we’re successful in the competitive grant,” Berry said.

The site review has shown charcoal ledges from fire pits that indicate occupation, and because these are at greater depth than what was recorded previously, it indicates earlier occupation.

“We think the extent of the site is much larger than the usual small number of tests they were able to do,” Berry said.

The teams hope to be able to use ground-penetrating radar to survey a wider portion of the sites. There is indication of a house-like structure, which was not explored in the previous excavations, and which could be probed using the radar technology.

Berry had looked at 250 projectile points as part of the Uncompahgre Plateau Project. These had been collected from previous digs and stored at the Canyons of the Ancients Visitor Center and Museum (formerly the Anasazi Heritage Center), outside of Dolores.

“The types exhibited there are much earlier than the radiocarbon we have at this (Shavano) site or other sites. It would be very important for us to do much more radiocarbon dating and demonstrate that we’re correct on the time depth,” Berry said.

The researchers had hope in bone samples previously collected from Shavano, which were housed at the Canyons of the Ancients center. But the samples showed they were from Ute occupation between 1700 and 1800 that had not been recognized at that particular site.

“We’ll be analyzing that too and trying to identify the artifacts in current collections and tying what we do in the future to support Ute occupation,” Berry said.

Other sites in the region have been dated back to 10000 BC, such as the Eagle Rock Shelter and Christmas Shelter. It is possible human occupation at the Shavano sites DARG is examining also stretch back well past Ute occupation. Spear points and atlatl darts point to site use as early as 6000 BC and more precise radiocarbon dating will help establish the age of the Shavano sites.

“I can’t imagine with that flowing spring there, that wasn’t used by all occupants of the Uncompahgre. It’s one of the primary reasons for the deposits at the site, the soils that washed into the site,” Berry said.

Since the spring was a water source for game animals, it likely also drew early hunter-gatherer people.

“They have a migratory pattern and hunter-gatherer folks certainly understood what that was and when they would be at that site,” said Berry.

“We have limited information from the 1960s. We have some idea about life-ways and climatic variation that might have occurred, but what will be important is to do the pollen analysis from the deposits,” he also said, referring the the research site as a whole.

“That will tell us what was growing where, and when, and what the climate might have looked like; (give) a much better picture of the environment in which all Uncompahgre people lived.”

The site analysis grant is for two years; armed with the information it stands to provide, DARG will apply through History Colorado and other sources for funding for excavations.

The local Chipeta Chapter of the Colorado Archaeological Society has received site tours and been brought up to speed on the progress of grants, the chapter’s vice president Leigh Ann Hunt said. The chapter hopes to be able to provide dig volunteers if DARG is able to engage in more extensive excavation.

The work being done fits well with ongoing chapter activity, such as that of the chapter’s members who guide tours of the Shavano Petroglyph site.

“Certainly, we in the Chipeta Chapter hope the research is able to add to our knowledge of the local prehistory,” Hunt said.

“We know the valley was very important to the Utes and was inhabited way back in time, but most of the earlier field work was quite old. DARG may be able to add quite a bit through new radiocarbon dates, pollen analysis and other modern studies.”

The Chipeta Chapter members’ extensive, cumulative knowledge is helpful for DARG, Berry said, and researchers are coordinating with them.

“They will be able to tell us things we don’t know and they will get the benefit of what we produce,” he said.

The research group intends to keep publishing updates in Southwestern Lore and working toward a fuller a picture of the Uncompahgre’s prehistory, he said.