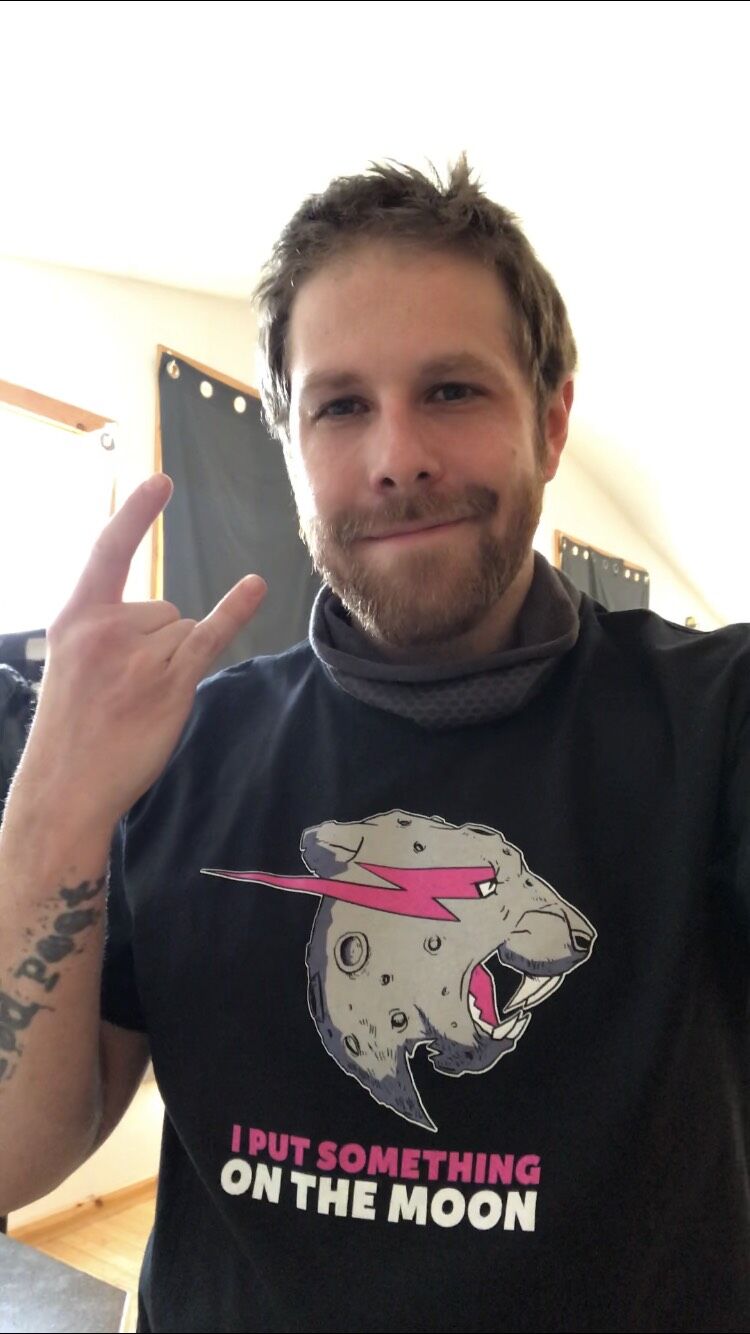 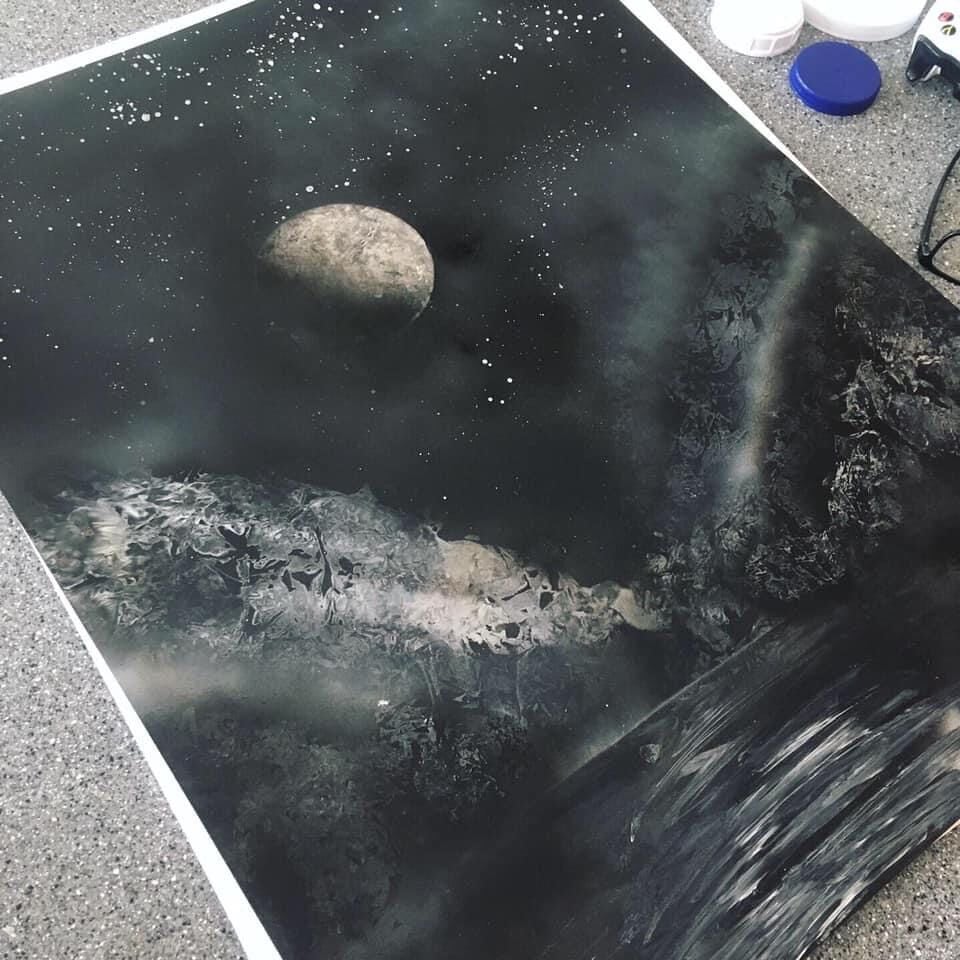 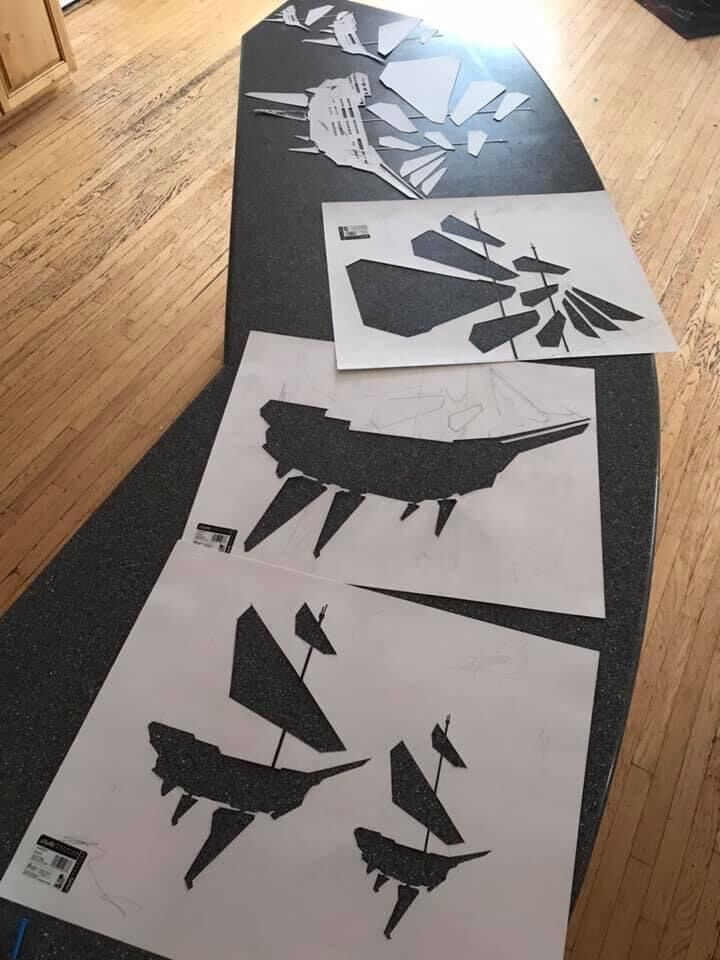 Northrup sketches and cuts out figures before beginning his painting. 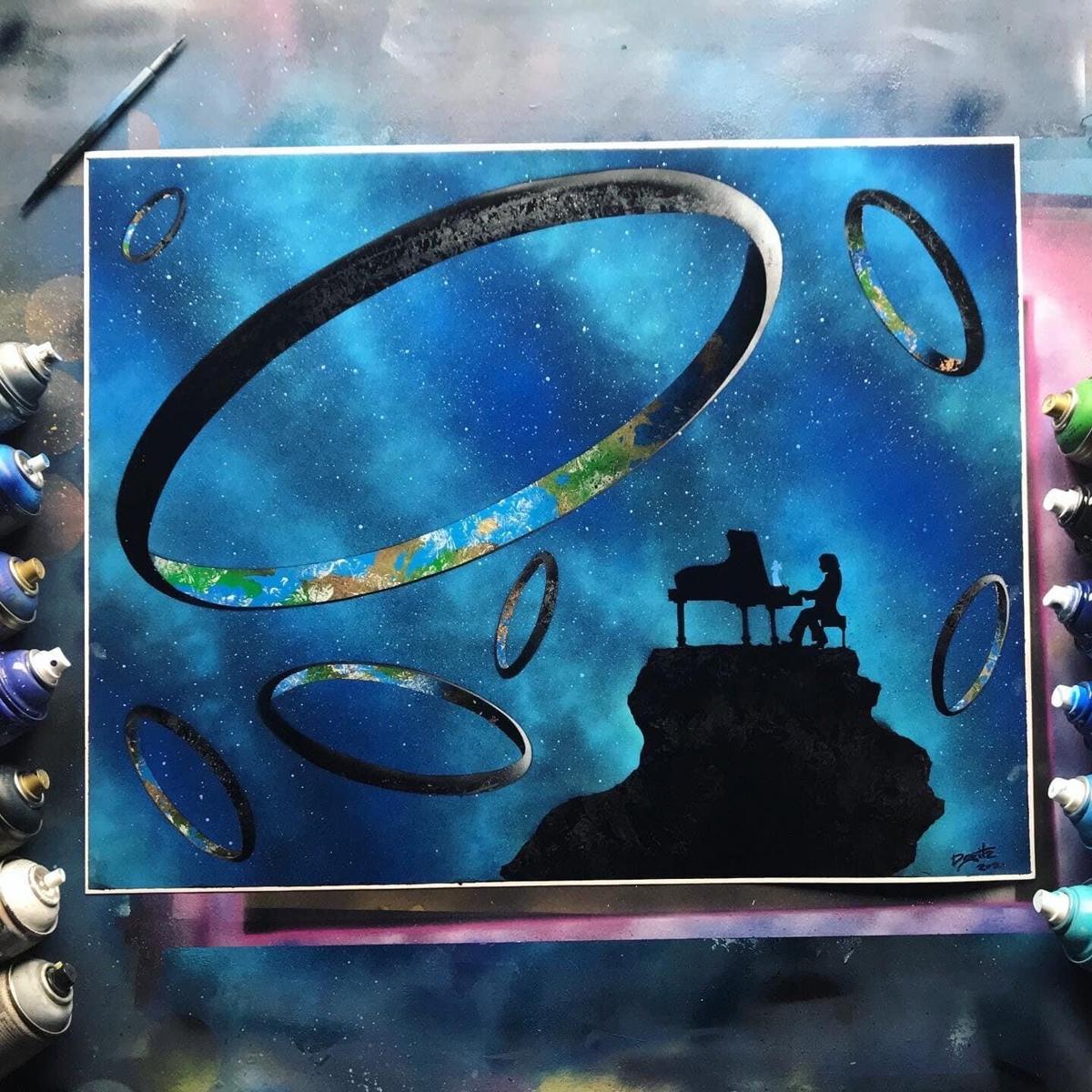 Northrup sketches and cuts out figures before beginning his painting.

Christaan Isaac Northrup found his love for spray painting when he was searching for ways to paint his guitar.

He has loved art from an early age, taking after his father. Until about a year and a half ago, however, he was taking on temp jobs for income.

During this time, Northrup was in a band and was browsing YouTube for information about how to decorate his guitar.

Northrup and his friends were writing music for their band, “Dog Day Sleep,” which is part of what inspired his handle, “doginthesleep,” once they moved in separate directions. (The full meaning of “Doginthesleep” is a secret Northrup is saving for when his YouTube channel passes 100k subscribers. The plan is to explain the meaning while painting the silver “play” button YouTube sends for reaching the milestone.)

While his passion lies in making music and video editing, Northrup quickly discovered that he had a gift for spray painting and street art, such as murals.

It didn’t take long for Northrup’s YouTube channel to take off, bringing in more commissions as time went on.

One of Northrup’s proudest accomplishments was his commission for Marty O’Donnell, the music composer for the Halo video game franchise.

The piece features the musician set up on a rock in space playing a grand piano, surrounded by giant, meteoric halos.

Northrup had originally painted a scene from the game for one of the company’s “Halo artist spotlights,” and the artist was featured.

O’Donnell came across Northrup’s artwork and loved it, requesting a commission.

“It was so surreal and I was nervous the entire time,” Northrup said.

“I’ve been playing Halo since I was 9. It was like a Star Wars fan getting a commission from George Lucas.”

Northrup said he had to “put those feelings in a box in his head” and carry on with his process.

Under normal circumstances, Northrup sketches out the entire scene for his client and sends the draft to them for approval. Once they approve it, he begins cutting out figures with an X-Acto knife, gets his camera out, and begins filming.

O’Donnell shook up his entire process by requesting a surprise commission. He wanted no sketches or ideas of what Northrup was creating for him, which upped the ante.

The composer ended up loving the commissioned piece and unboxed the art on his own YouTube channel.

Northrup had been working for the Horsefly in Montrose, as well as working in HVAC, before his spray painting took off.

“Phil Freismuth at the Horsefly commissioned me for the big mural that’s on the wall now,” Northrup said.

He and the owner had ended on good terms and Freismuth recently commissioned the artist for another mural behind the restaurant’s music stage.

While the pandemic hasn’t affected Northrup’s artwork in a great way, it has given him more time to focus on his art as it’s taken away time from employment.

One of his biggest challenges is knowing when to stop his painting.

“I really don’t know when to stop, and I’ve ruined quite a few paintings like that,” Northrup said.

“I gravitate toward spray painting because it’s quick and I can get through a piece even on a time crunch, but it’s a rich reward when I finish.”

For Northrup, his art is about the sense of enjoyment, especially in the process.

Most of his focus is on video editing for his YouTube channel and creating music, and it all started from wanting to learn how to paint his guitar. Now, Northrup can incorporate each facet of his passions into one, where he can film his process, edit the video and create music for the final cut.

The “behind the scenes” documentaries that were released with the Halo games inspired Northrup to work in the production world, from video, audio and conceptual art.

“Writing music and making videos, as well as making art for album covers, seemed like the perfect fit for me,” he said.

At the end of the process, Northrup has created art within art.

“My dream is to be able to support my family while doing my art,” Northrup said. “I hope my daughters will see them and be inspired.”

Northrup credits a lot of the success of his business to his wife of seven years, Jennifer Rice.

“She is the rock star for supporting me through all of this,” Northrup said.

The couple have two daughters, a 3-year-old and a newborn.

“It takes a long time to put an entire video together, between sketching the concept art, communicating with the customers, then drawing the final, cutting it out, and painting it,” Northrup said.

From editing the video footage and producing the music, the artist has many late nights, but says his wife spends many of those nights helping with the business side selling prints, managing the shipping and the finances.

Prints have been shipped to Ireland, the UK, Sweden, and Australia.

The couple is hoping to move into digital design soon for merchandise, as well as launch a website where customers can buy their products and his art online.

“Jennifer is helping me put all this together, and constantly keeps me inspired, all while being the awesome mom of two beautiful girls,” Northrup said.