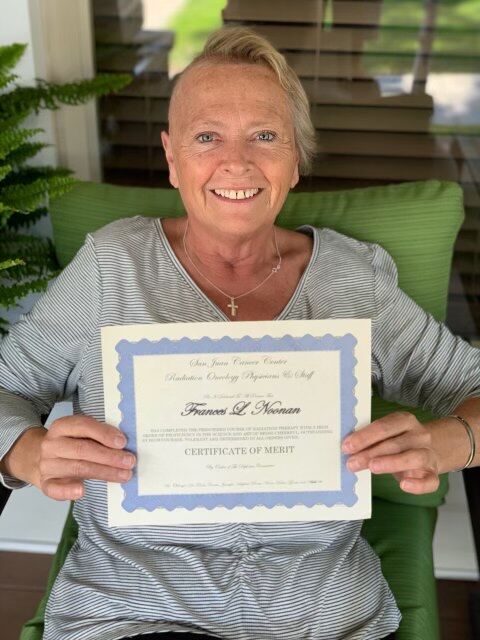 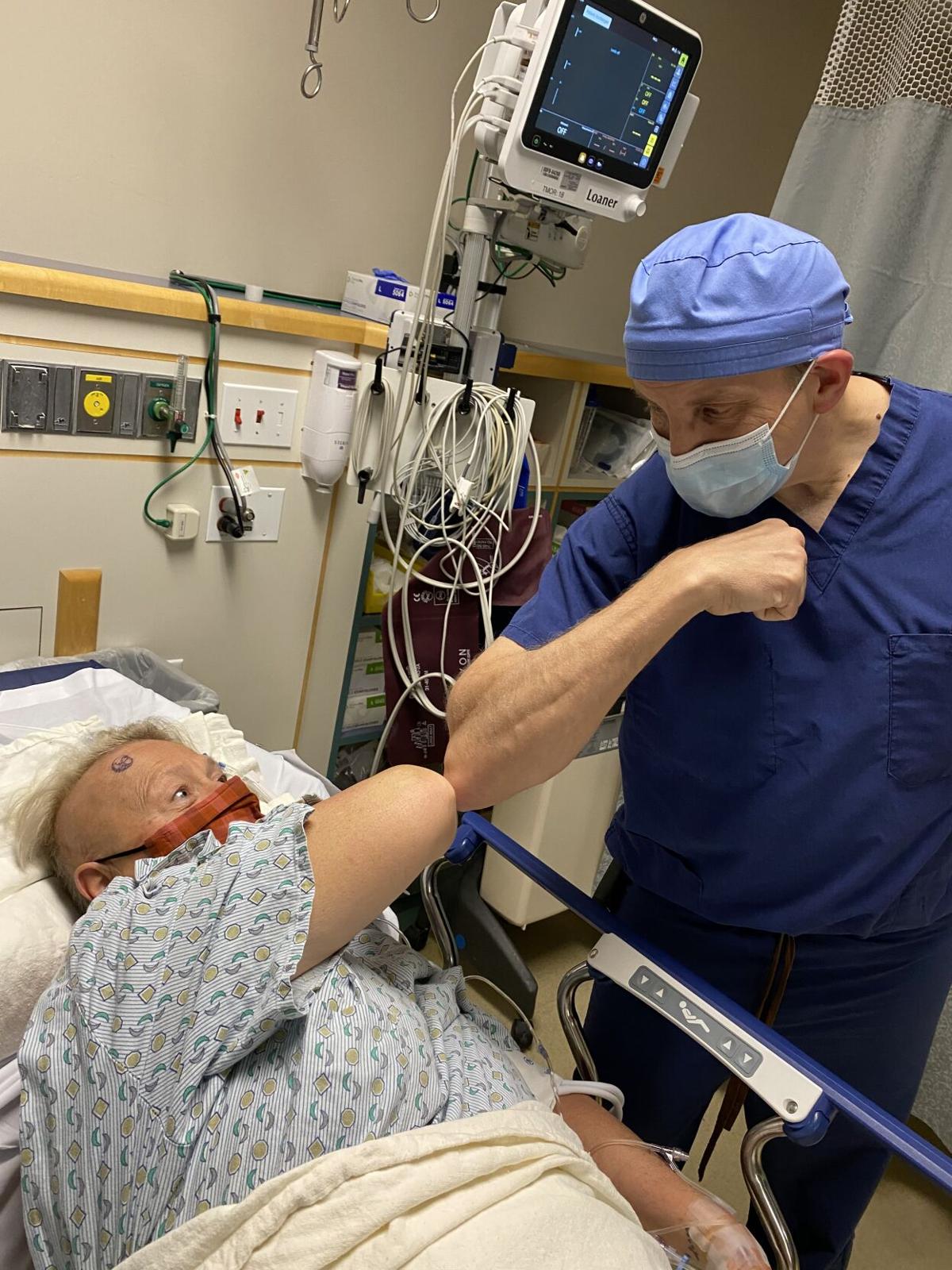 Fran Noonan of Montrose elbow bumps her surgeon Dr. Andrew Sloan at Cleveland's University Hospitals just prior to surgery as part of a clinical trial for glioblastoma treatment. 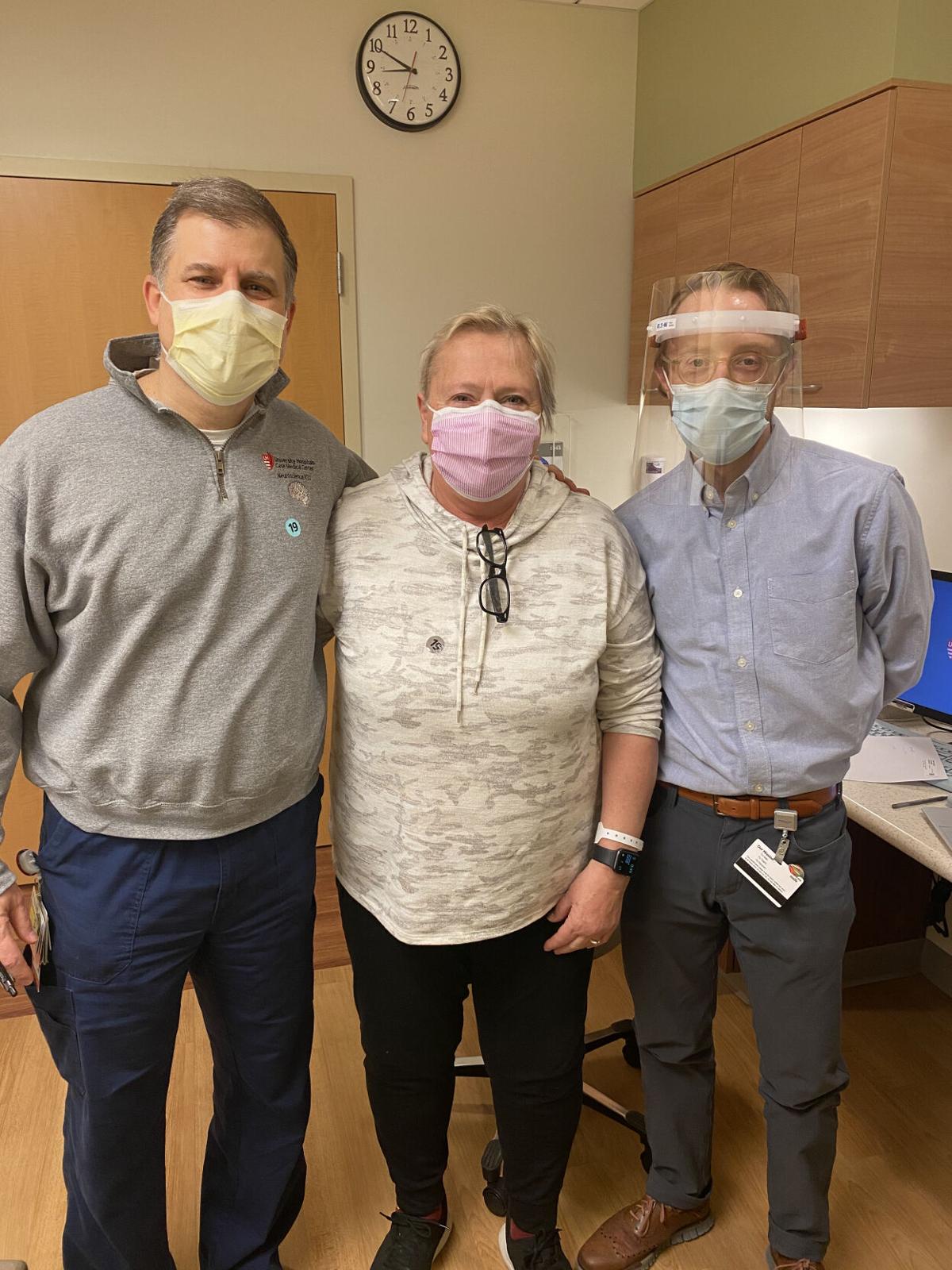 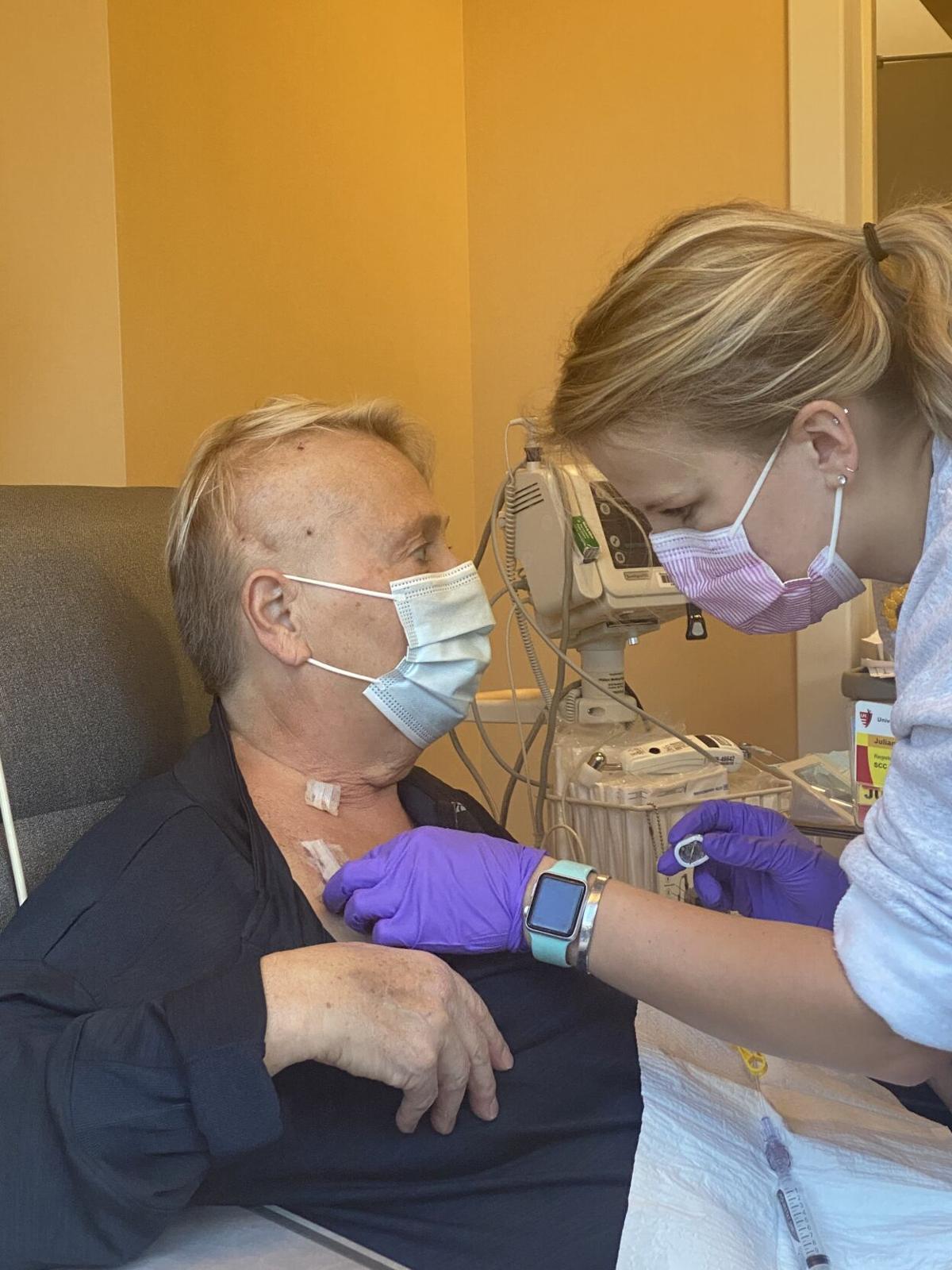 Noonan receiving her first infusion of Keytruda as part of a clinical trial that combined immunotherapy with a specialized type of brain surgery that uses a laser to heat tumors.

Fran Noonan of Montrose elbow bumps her surgeon Dr. Andrew Sloan at Cleveland's University Hospitals just prior to surgery as part of a clinical trial for glioblastoma treatment.

Noonan receiving her first infusion of Keytruda as part of a clinical trial that combined immunotherapy with a specialized type of brain surgery that uses a laser to heat tumors.

Two Marches ago, Fran Noonan was eager to get to Denver to support her ill sister. But she was experiencing numbness in her hand and so, went to the emergency room here first.

She wasn’t thinking that she would soon be headed to St. Mary’s Hospital in Grand Junction by ambulance after an MRI turned up something suspicious, or that two days later — St. Patrick’s Day 2019 — she would be undergoing surgery.

And she wasn’t thinking about brain cancer.

Lab results confirmed glioblastoma multiforme, or GBM — “the worst you can have,” Noonan said Friday.

Although the prognosis then was grim, Noonan today stands as a so-far successful clinical trial, after enrolling in one at University Hospitals Seidman Cancer Center, Cleveland for pioneering treatment entailing an immunotherapy drug and brain surgery.

Noonan and her family want others to know they can seek clinical trials, too, rather than just accept a terminal diagnosis.

The journey has been a long one. Last May, Noonan lost her sister, Geraldine “Gerry” Krotz, who had been diagnosed with renal cancer the same day Noonan learned about the GBM.

After her diagnosis, Noonan underwent treatment at San Juan Cancer Center that included radiation and chemotherapy.

For a time, her scans came back clear. But in August of last year, scans showed a recurrence in a location that was inoperable. Noonan, well-known in the area for her catering business, was given about five months to live, but she’s beaten those odds because of the clinical trial.

“I just want to be a part of something bigger, because this is a terrible disease and so many more people are getting it,” Noonan said.

Her daughters, Lauren Noonan-Brown and Kerri Inda, were determined to save their mother and aggressively researched options, she said.

“It’s been a long road, but she’s doing awesome with it,” Noonan-Brown said. Because of how aggressive GBM is, many diagnosed might not think they have the time to pursue a trial, but those conducting the trials are aware and work as fast as possible, she said.

“It’s hard if you don’t know what to look for. You can take what the doctor says and say, ‘I have five months to live.’ But every step of the way, she was like, ‘Nope, I don’t accept that.’ She’s had such a positive attitude,” Noonan-Brown said.

At UH Cleveland, the family found a clinical trial recurrent GBM. The trial was designed to test the use of a procedure called laser Interstitial Thermotherapy, or LITT, in combination with the drug pembrolizumab (sold as Keytruda).

As described by UH Cleveland, LITT is a minimally invasive surgical technique that uses a laser to heat brain tumors. Keytruda helps the immune system work properly in detecting and fighting cancer cells, but it is experimental in this use, as the Food and Drug Administration has not approved it for this purpose.

Dr. Andrew Sloan, director of the hospital’s Brain Tumor & Neuro-Oncology Center, used an intra-operative MRI to observe Noonan’s brain during the surgery. Through a small hole in the skull, the MRI acted as his eyes, UH Cleveland’s literature explains, heating the tumor and using thermometry to assess it, as well as kill cancer cells in real time.

Noonan’s trial stands apart from previous ones — she received the pembrolizumab first, via infusion, then LITT, followed by another infusion. Prior to hers, patients received LITT first.

Sloan is described as the principal investigator for the “first-in-human Phase 1 trial, pairing LITT with the immune checkpoint inhibitor pembrolizumab,” per UH Cleveland/Seidman.

“No one has done this before, combining laser interstitial surgery with immunotherapy,” Sloan said in information on the hospital’s website.

The Montrose Daily Press could not reach Noonan’s clinical trials coordinator prior to deadline.

Noonan discovered the UH Cleveland/Seidman trial through a Facebook group for those with glioblastoma. That she was born at the same hospital in 1953, and still has family in the Cleveland area, made participating all the more appealing.

After a virtual visit and Sloan reviewing her medical records with neuro-oncologist Dr. Robin Buerki, Noonan got the good news: “He said you are a perfect candidate for this procedure,” she said.

“The first diagnosis (2019) was that I would live 12 to 14 months. When the recurrence came, they gave me five months. That wasn’t enough for me. That’s why we searched for clinical trials. This one was perfect for me.”

‘I swear it was a God thing’

The LITT procedure removed 65% of the tumor. Noonan continues receiving regular infusions of Keytruda and will for two years — which to Noonan, was positive news, since it is a span of time longer than her initial prognosis gave her.

Scans late last year showed a decrease in tumor size and, most lately, a miracle. “This last one I just had shows that it’s gone and there is no sign of any recurrent disease,” Noonan said. “GBM is notorious for coming back. When you live with GBM, you’re not just wondering ‘if,’ but when you’re going to get another one.”

She called Sloan’s pioneering efforts “extraordinary.” Noonan also suspects that receiving Keytruda before the LITT procedure may hold the key as to why she’s had such a good response.

Noonan must return to Cleveland every three weeks for infusions. Because the infusions are for experimental purposes as part of a clinical trial, she has to receive them at the hospital that is running the trial.

To help Noonan keep up with expenses, her daughters and friends are holding an auction on Facebook Live at 5 p.m. Saturday, Feb. 27. On the block are several goods and services donated by local businesses.

From now until Feb. 27, people can also purchase raffle tickets for a $1,000 gift card to Area Best Pawn, made possible by Scott and Brenda Long and the Coker family.

Silent auction items and more details can be found on the Facebook page Go Fran Go. To be redirected to the page, go to https://tinyurl.com/noonango.

Raffle tickets ($20 each or five for $100) must be purchased prior to the auction an can be found at all three Area Best locations, or message Noonan-Brown through the Go Fran Go page. Area Best Pawn is located at 900 E. Main St. and at 2014 S. Townsend Ave. in Montrose, and in Delta at 610 Colorado Highway 92.

The Noonan family urges people not to shy away from thorough research and not to settle for just one medical opinion.

Noonan and her daughter said there were procedures and treatments that, had Noonan taken them, would have excluded her from the clinical trial.

“I swear it was a God thing, it had to be. A divine intervention. I just hope that I can help other people with this. I’ve been so fortunate. We live in the greatest community,” Noonan said.

“You should research every option before you agree to a treatment. It’s a very complex disease,” Noonan-Brown said. “Even in Denver, none of them could help her. Sometimes, you have to look outside your immediate bubble.”

Noonan-Brown has been referring people to the Facebook group Glioblastoma — GBM Survivors to Thrivers.

“It definitely pays off and to know there are people who do make it. It takes work, but it’s worth it. My mom has had such wonderful support from the community. It’s amazing what having people praying for you and pulling for your can do,” Noonan-Brown said.

“She’s living her life and trying to help as many people as she can,” she added.

“I’m a believer in second and third and fourth opinions if you need to,” Noonan said. “I would never have known about (Sloan) if we hadn’t done the research.”

She told others to talk to their oncologist about clinical trials, or check clinicaltrials.gov, a searchable website.

Noonan is determined to continue helping others. Part of that is sharing her story; part of it is deciding to one day become a research item herself.

“It’s really important for people to speak out if they are successful; that we share our stories, because others are just grasping for help on how to get through it,” she said.

“I look forward to being part of science. When I die, I’m donating my brain to this team. My brain is going to them because they worked so hard and they’re so thorough,” Noonan also said.

Noonan credits continued support, prayers and the advocacy of her daughters — “they were my life force,” she said.

“Honestly, I think God has taken my hand and taken me through this,” Noonan said.

“Stop and smell the roses while you can. you just never know when your life will change. I never thought my life would change. My sister and I were both diagnosed with a fatal disease on the same day,” she added.

“ … I am surrounded by a community of love and generosity. You can’t beat that. Keep praying for me and pray for others that are going through this.”

Or, visit the Facebook page Go Fran Go via https://tinyurl.com/noonango to message Lauren Noonan-Brown to purchase.

• For information about clinical trials, consult an oncologist or visit clinicaltrials.gov.