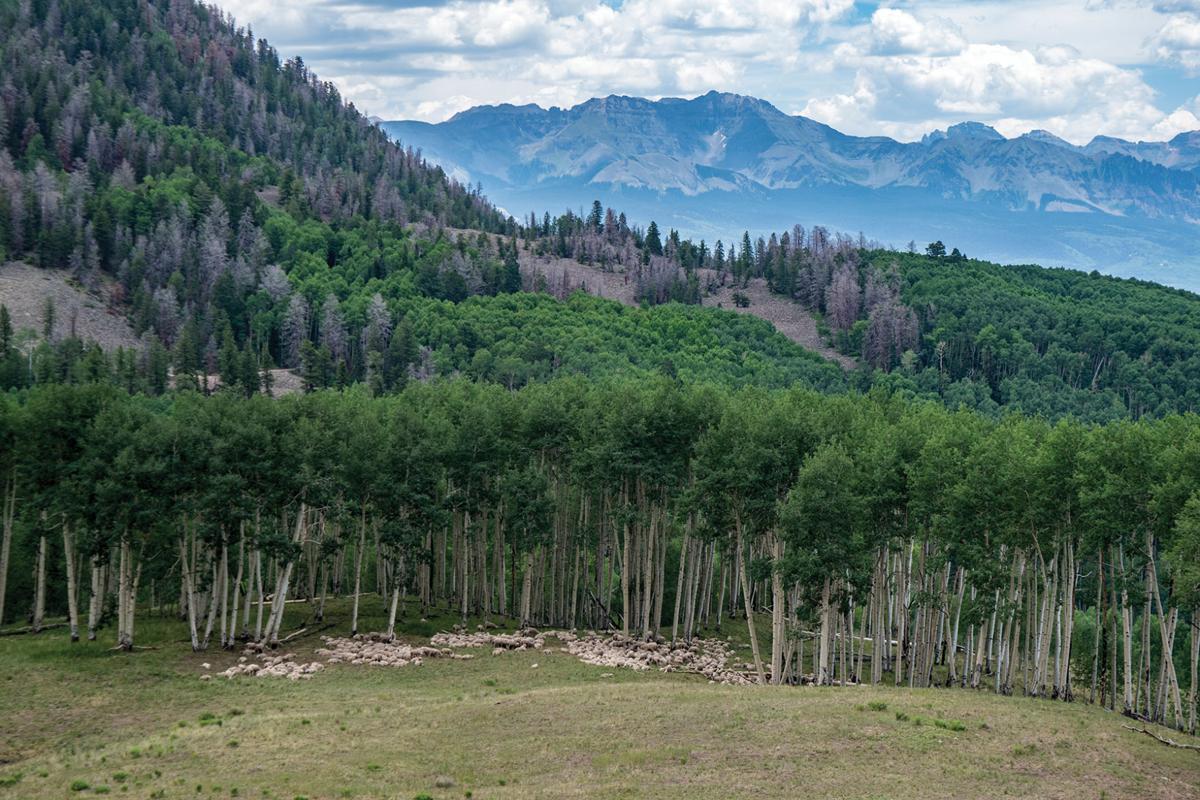 This flock along Last Dollar Road in the San Juan Mountains could be in serious danger if the gray wolf reintroduction is successful. The wolf advocates are collecting petition signatures to put the issue on the ballot next year. 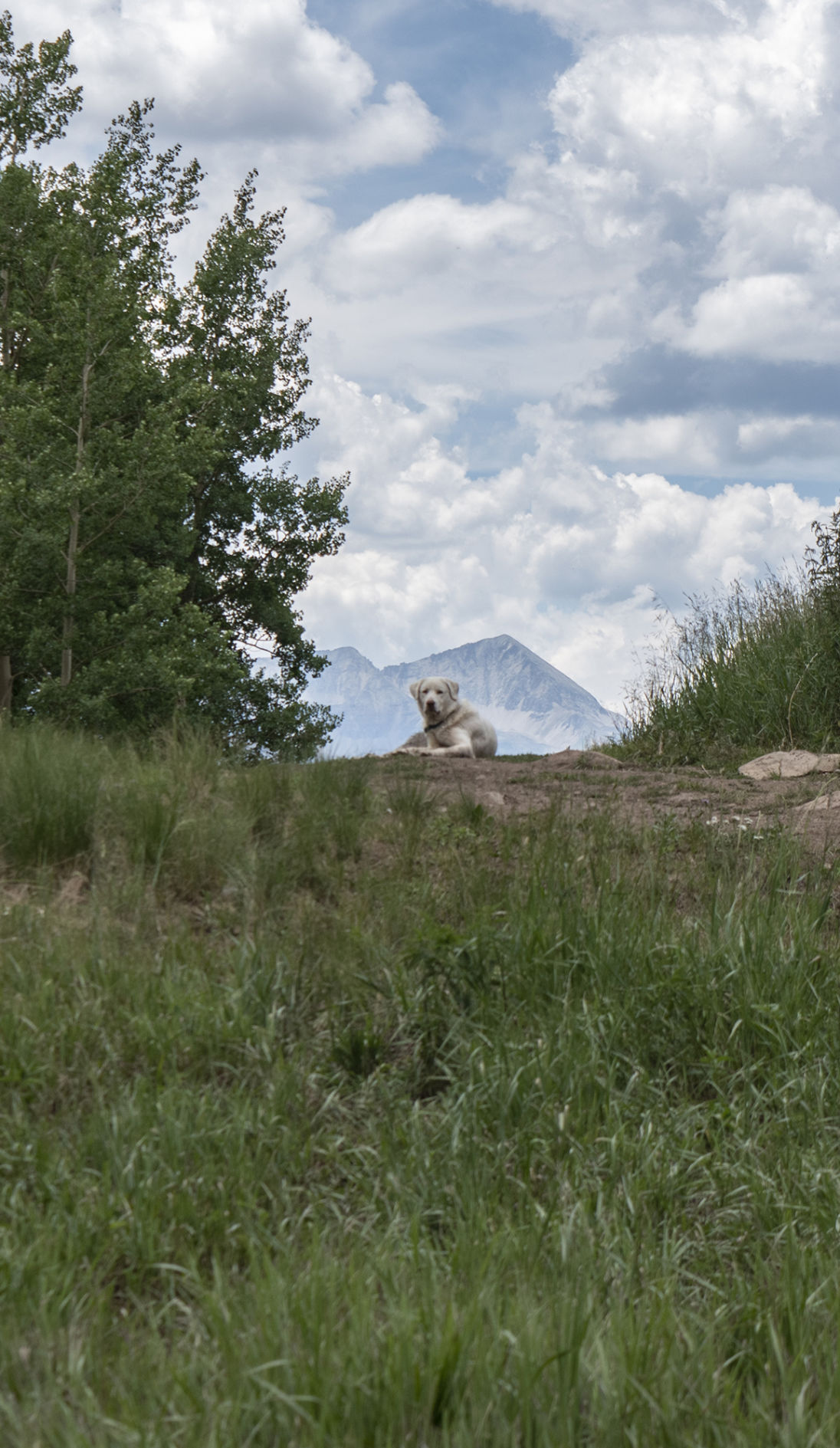 A sheep dog sits atop a hill.

This flock along Last Dollar Road in the San Juan Mountains could be in serious danger if the gray wolf reintroduction is successful. The wolf advocates are collecting petition signatures to put the issue on the ballot next year.

A sheep dog sits atop a hill.

One-hundred-and-seventy-six sheep lying dead in a pile at the bottom of a cliff is enough to stir anyone’s negative emotions about whatever caused the disaster. In this case it was wolves that attacked a flock in southern Idaho and panicked them into running off the edge of a rock outcropping. They fell more than 100 feet.

The incident occurred in Idaho in 2013. A picture of the slaughter was part of Jon Hotaling’s presentation to the Colorado Wool Growers’ Association when they met in Montrose in mid-July. Hotaling is CEO of the communications and consulting firm Ferguson and Associates. The company has been retained by the Coalition Against The Wolf organization to fight Rocky Mountain Wolf Action Fund Initiative to reintroduce gray wolves into the San Juan Mountains. Colorado is the latest state to face the possibility of having one of the great predators living side by side with its livestock and growing population.

There were wolves in Colorado and other Rocky Mountain states until the 1940s. The packs, which competed with big game and livestock, were hunted down and, for all practical purposes, made extinct. Over the last 40 years there have been re-introductions of both Mexican and gray wolves in Montana, Wyoming, Idaho, Arizona and New Mexico. There was a forced re-population in Michigan as well.

According to Hotaling none of the wolf advocates can give anyone a viable reason for the return of the wolves, other than they used to be here and they should return.

Based on what happened in Montana, Wyoming and Idaho when the reintroduction occurred there, the Colorado sheep and beef folks are more than a little nervous about the possibility of 30-50 wolves being “planted” in Southwestern Colorado.

The initiative stresses that the wolves will be placed on public land to restore the balance in the wildlife population. According to Hotaling, that is all well and good, but the wolves don’t respect forest boundaries.

“Not only that, plenty of producers pay for grazing allotments on public land,” Hotaling said.

Further, the added predators are listed by the U.S. Fish and Wildlife as endangered, which according to the opponents of the measure makes managing them next to impossible.

By the initiative, the Colorado Parks and Wildlife Commission would be directed to “develop a plan to restore and manage gray wolves in Colorado. The measure also would budget funds to pay livestock owners for animals killed or injured by the wolves. The Parks and Wildlife Commission has said no to the project. With that, the Wolf Action folks have pushed a petition through the Colorado Secretary of State’s office and are now gathering signatures to put it on the ballot next year. They will need almost 125,000 signatures from registered voters to bring the measure to the public vote. They have until December 13 to obtain the signatures.

The wool growers, cattlemen and big game conservation groups are staunchly opposed to the project.

In their presentations to the sheep ranchers, both Hotaling and Wyoming rancher and author Cat Urbigkit, pointed to the massively increasing costs of managing flocks and herds and their exposure to the wolves. According to Urbigkit, her costs have skyrocketed. She has lost dogs and sheep and a lot of sleep to the Wyoming packs.

“We have to have night enclosures every night, we added more herders and dogs and still we are losing livestock,” she said. She said that while the financial toll is high, the emotional toll is even higher and is wearing on her and her employees. “You never know what you are going to find when the sun comes up,” she said.

Wolves are primarily nocturnal and do their damage at night. Sheep and cattle ranchers find it impossible to stop it.

According to Hotaling private livestock are not the only victims. Wildlife herds take a huge hit when wolves run amok. By the numbers from the U.S. Fish and Wildlife Service, the elk populations in the areas where the wolves have been reintroduced, have fallen drastically. From 1994 to present the elk herds in the wolf habitat have dropped by 75 percent.

And then there is the management cost. The lead agencies involved in the Mexican Wolf project in Arizona and New Mexico have spent over $44 million since 1977. Wyoming spent $1.2 million in 2018. And now the Colorado ranchers have a new expense. Fighting Initiative #107.

Colorado producer J. Paul Brown of Ignacio, Colorado, and Legislative Liaison for the Stop The Wolf Coalition stood at the Montrose meeting to bring the group up to speed on the opposition the herders and ranchers are mounting.

“The Rocky Mountain Wolf Action Fund is a large and well financed organization and they are a serious opponent to our industry and way of life,” Brown told the group. He said that the Wool Growers, sportsmen, and cattlemen have begun raising money and have launched their own campaign, first against the petition, and if it is successful, the public vote next year.

“We don’t have a lot of money and what we have we are spending very frugally and wisely,” Brown said. “But we need any help we can get. Anyone who can contribute to our cause will be greatly appreciated.”

Brown framed the problem as a fight for “our lives.”

Some of the tools the ranchers and big game hunters are using are social and web media as well as one-on-one contact. The website address is stopthewolf.org, where the visitor can see who and what the Stop The Wolf coalition is and what the issues are. The site is also a facility for accepting donations.