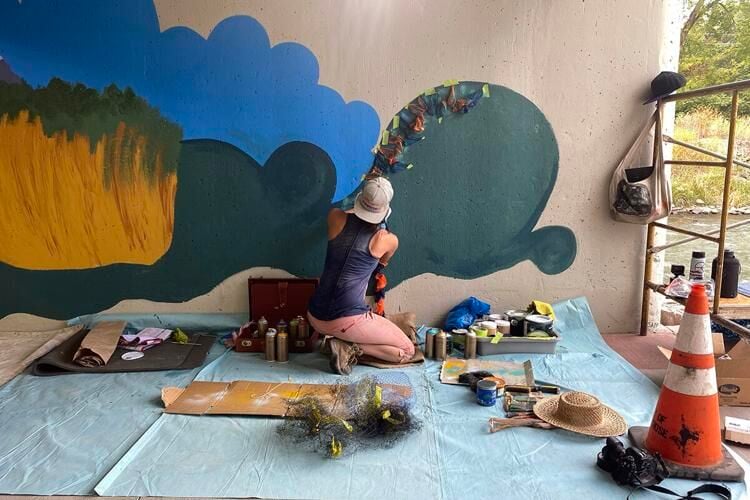 Artist Heather Bischoff works on the mural that now graces the underpass on the Connect Trail by the Uncompahgre River. The trail was recently awarded the Starburst Award. (Montrose Daily Press/file photo) 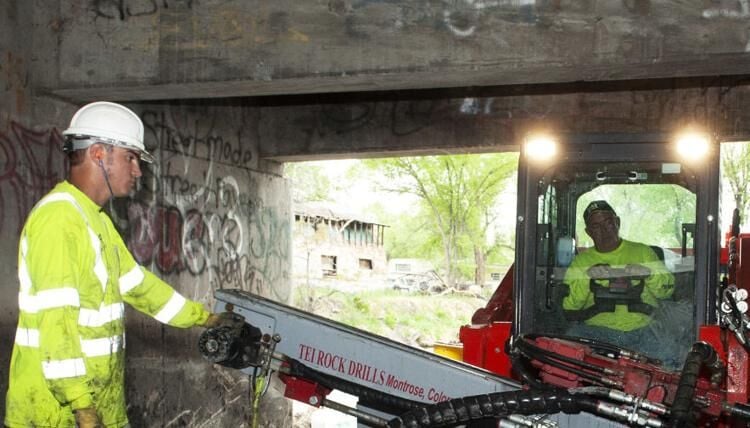 Workers with Catamount Drilling & Construction, Inc. of Montrose use a locally made rock drill from TEI Rock Drills, Inc. to bore into the earth beneath the West Main Street bridge as work on the Montrose Connect Initiative Recreation Trail continues in 2019. The trail has now been honored with a Starburst Award. (City of Montrose/William Woody)

Artist Heather Bischoff works on the mural that now graces the underpass on the Connect Trail by the Uncompahgre River. The trail was recently awarded the Starburst Award. (Montrose Daily Press/file photo)

Workers with Catamount Drilling & Construction, Inc. of Montrose use a locally made rock drill from TEI Rock Drills, Inc. to bore into the earth beneath the West Main Street bridge as work on the Montrose Connect Initiative Recreation Trail continues in 2019. The trail has now been honored with a Starburst Award. (City of Montrose/William Woody)

In recognition of putting state funds to good use, the City of Montrose, the Montrose Recreation District and the surrounding region have been awarded the Colorado Lottery Starburst Award for the “Connecting the People to their Parks and Recreation Trail” project.

The award is a recognition of excellence in the use of Colorado Lottery funds for community and conservation projects. The trail, which officially opened last year, extended the existing Uncompahgre River Trail by 2.25 miles, including 1.5 miles to the north and .75 miles to the south, “connecting” more people to parks and amenities in a manner that is safer for pedestrians and bicyclists.

Montrose Mayor Doug Glaspell sees the value in that connection on a regular basis.

“The thing I’ve noticed is the amount of usage it’s getting, both the parks and the rec district. It just amazes me the age levels I see using it, from babies, all the way up to the elderly,” he said.

“I think it seems to have provided an activity almost everyone is enjoying and can do, and certainly helps from an income bracket standpoint. That’s very evident, too. You see people from probably every bracket you can think of. I think it’s a vital source of activity, for not only Montrose, but visitors coming in.”

“Conservation is a key pillar for the Lottery. It includes not only conserving open space, but also upgrading recreational spaces, creating new places for Coloradans to play, and supporting ecosystems and wildlife,” said Tom Seaver, director of the Colorado Lottery, in a news release.

“This year’s Starburst Award winners aptly reflect the wide ranging projects that our proceeds support. With now $3.6 billion going to our proceeds beneficiaries, we continue to look for new ways to grow revenue responsibly to protect more of Colorado’s great outdoors.”

With Lottery funding and through a Great Outdoors Colorado (GOCO) grant, the expenses for the $4.28 million project were cut in half.

In addition to the Lottery funding, the Conservation Trust Fund (CTF) granted $150,000 toward the project.

The new trail promotes connectivity and accessibility for citizens. It’s been heavily used, even during the winter months.

The city constructed two underpasses from existing bridges that allow pedestrians and bicyclists to safely cross the busy roads.

The Connect Trail offers a continuous, safe route that runs north to south through Montrose, linking the city’s and the Montrose Recreation District’s parks, trails and recreational assets.

The recent Starburst Award comes after a similar award was presented to the city in 2015 for the creation of the Water Sports Park.

Glaspell said he welcomes GOCO dollars to help improve quality of life here and, in the long run, bolster businesses.

“It always makes me feel a little better when I seem some of those dollars coming from the state to the Western Slope,” he said.

“I think any time we have that opportunity, it certainly does provide opportunity for anybody in the state, but when you see the number of visitors we have through here, it does enhance our marketplace and help the local businesses.”