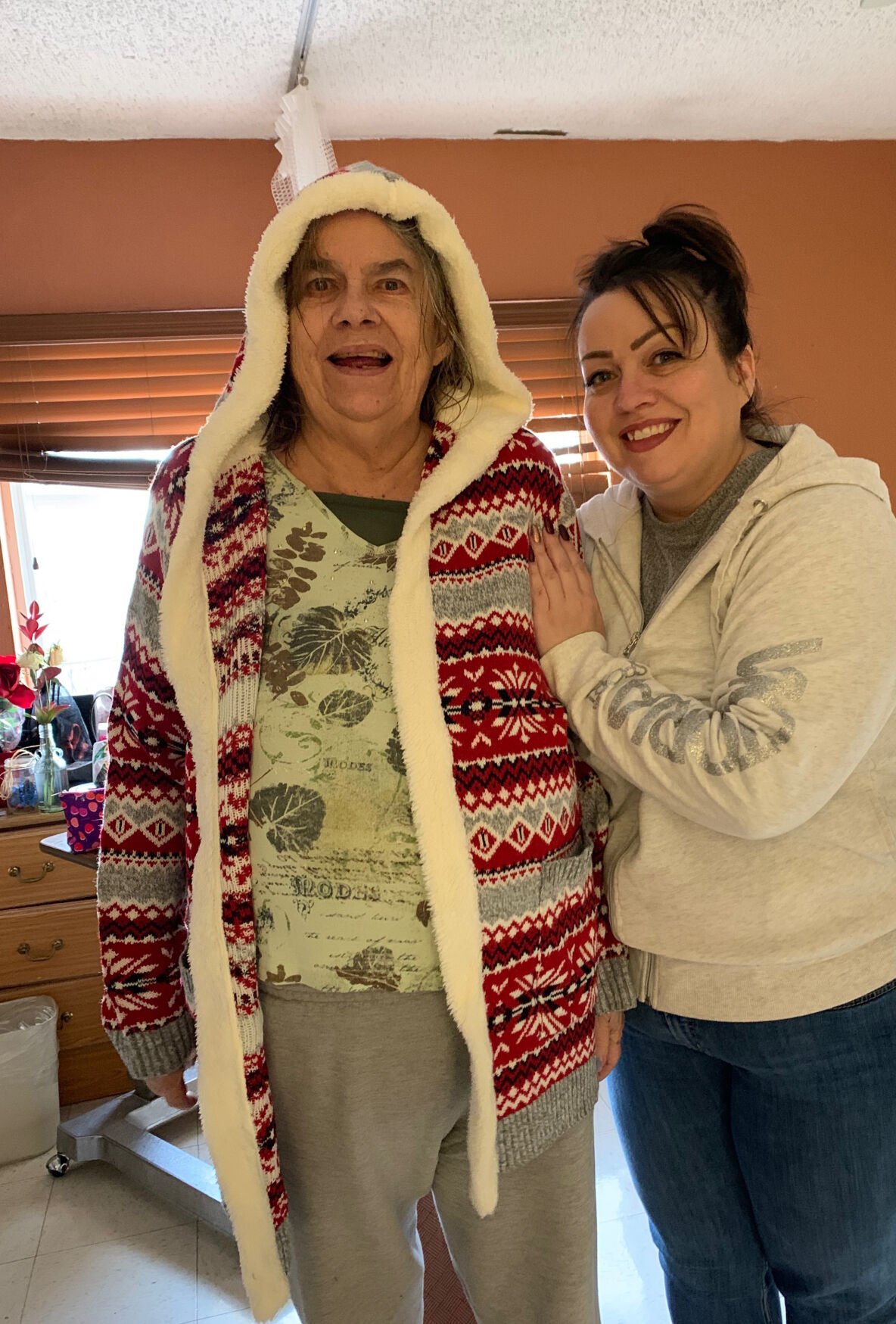 Lois Bercillio, left, stands with her daughter Catrina Perez on Dec. 22, 2019, wearing her Christmas sweater. Perez moved her mother out of San Juan Living Center shortly before her passing due to neglect. 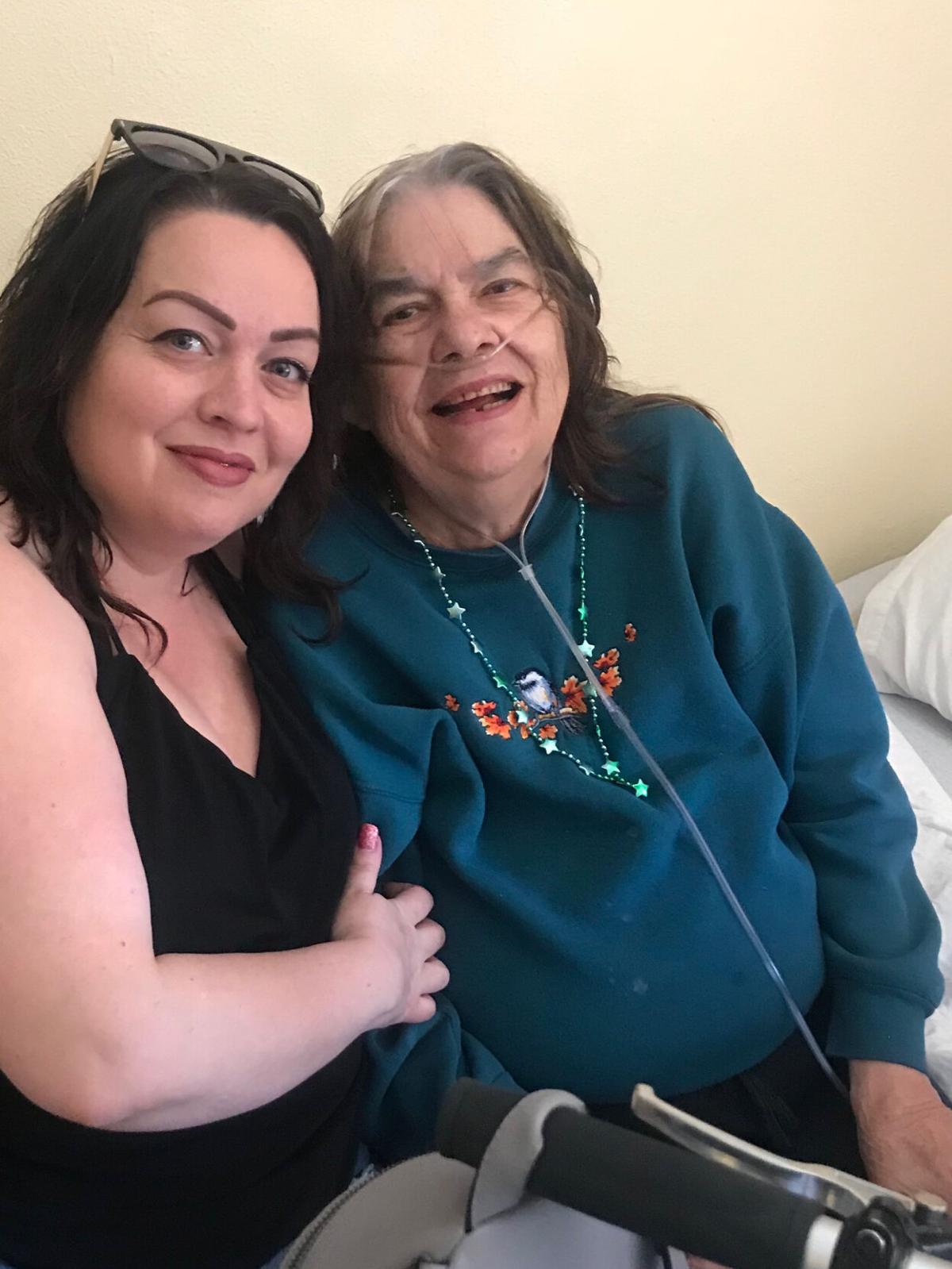 Catrina Perez sits with her mother Lois Bercillio during her 80th birthday on June 9, 2019. The family could not spend time with Bercillio on her birthday this year due to COVID-19 visitation restrictions.

Lois Bercillio, left, stands with her daughter Catrina Perez on Dec. 22, 2019, wearing her Christmas sweater. Perez moved her mother out of San Juan Living Center shortly before her passing due to neglect.

Catrina Perez sits with her mother Lois Bercillio during her 80th birthday on June 9, 2019. The family could not spend time with Bercillio on her birthday this year due to COVID-19 visitation restrictions.

Lois Bercillio was a little warrior who spent her entire life caring for others — giving meals and Christmas presents to people in need, raising her children and caring for others’ kids at a daycare, her family said.

But after her daughter Catrina Perez decided her mom wasn’t getting the care she needed at the San Juan Living Center, Perez moved her to Colorow.

In January 2017, Bercillio, who was admitted as a hospice patient with dementia, moved into San Juan Living Center. Perez would visit her mother weekly for several years. Then the pandemic struck, effecting new protocols that were aimed at reducing the spread of the novel coronavirus.

“Because of COVID-19, nobody was allowed in,” Perez said. “You have to trust what is happening when you can’t check up on your family.”

Perez said she became aware her mother was ill in March. She remained ill for several months. Then Perez said she was contacted by the facility after, she says, a nurse failed to do a vital check on her mother before giving her her medications, causing a medical issue. “They called me and said I can come in two hours before she passes.”

The first day she saw her mother was on a Sunday. Not going through any screenings, Perez went to her mother’s room, which was also occupied by Bercillio’s roommate. Then when Perez returned Monday, the staff corrected the procedures, requiring Perez to wear a mask and gloves.

“My mom had been in isolation three to four times and was tested twice for COVID-19 and was never positive,” she said. “Her roommate had COVID.”

Her mother was then moved to another room, which Perez said had no working air conditioning unit. Hospice provided a standing fan for the room, but Perez said the temperature was still around 90 degrees.

Over the next several months, Perez said she became bitter about what happened as the family was not allowed to send cards, blankets and other items to Bercillio, but she learned the center was accepting donations from the community.

Perez said she found out San Juan Living Center was accepting residents from other centers who had tested positive for the coronavirus, escalating her frustrations.

“It was really just disrespectful that these people are isolated and the San Juan Living Center let other people from other centers in,” Perez said. “No family members nor residents were asked if COVID patients could come in. It seems like the residents have no choice because they are stuck living there and by accepting COVID patients, they are constantly keeping the building contaminated.”

As her mother’s health continued to decline, the staff contacted Perez and scheduled her for visitation. After going through a coronavirus screening, Perez had to wear a face covering and was given hand sanitizer, but as she walked into the center, she said neither the staff nor the director were wearing masks, which she said was not fair.

“The treatment and non-compassion for my dying mother is really appalling to me,” Perez said. “Seeing the treatment and neglect toward my mom makes me know she was not the only one. For San Juan to be hit the hardest, they were the most negligent.”

Perez said Bercillio was in a room at the center that did not have a working call light and her basic needs were not being met.

“The last day I was there, someone cut her hair so short so they didn’t have to brush my mom’s hair and she was only in her diaper,” Perez said. “I hate to say it like that, but I feel like she’s being denied basic human rights.”

Bercillio’s hair had become matted on the back from laying in a bed, but seeing her mother’s short hair made Perez more upset.

“Mom is a cancer survivor and she shouldn’t have to deal with that,” Perez said. “It was pure neglect. They weren’t helping her brush her teeth; there were no baths.”

She added, “Mom was confused with dementia, so she wasn’t in her right mind. I’m grateful she wasn’t aware of what was going on because of her two-time battle with cancer. All it took was brushing her hair everyday, not cutting her hair.”

During other visits, Perez felt like the staff was not protecting her mother.

“This little 81-year-old women can’t have water to sit out on the patio to see me,” she said. “We were not allowed to ask for water because that put staff at risk.”

In early August, Perez reached out to a hospice social worker for advice about the situation. She didn’t know if she would be able to move her mother to another facility due to the center having patients with COVID-19, but she was going to give it her best shot for her mom.

By Aug. 11, Bercillio had been screened and accepted as a resident at Colorow Care Center in Olathe.

“The only thing in grace was the last week of my mom’s life, I sat in her room and watched the staff turn her, dress her and groom her. I would have never forgiven myself if I let her die there (San Juan Living Center). They wouldn’t have treated me as well.”

Knowing her mother was treated with compassion through her final days eased the pain for Perez.

She also hopes her story inspires families to check in with their loved ones more frequently and to take every opportunity to visit them to make sure their needs are being met.

“If you have someone there and don’t like the scenario, you can move them,” Perez said. “You feel like you can’t do anything, but there are people you can reach out to.

“There are other places that are good and you don’t have to put up with that treatment. If I wouldn’t have had those people, I don’t know how I would have got my mom out of that situation.”

Lauren Brant is a staff writer and digital content coordinator for the Montrose Daily Press.