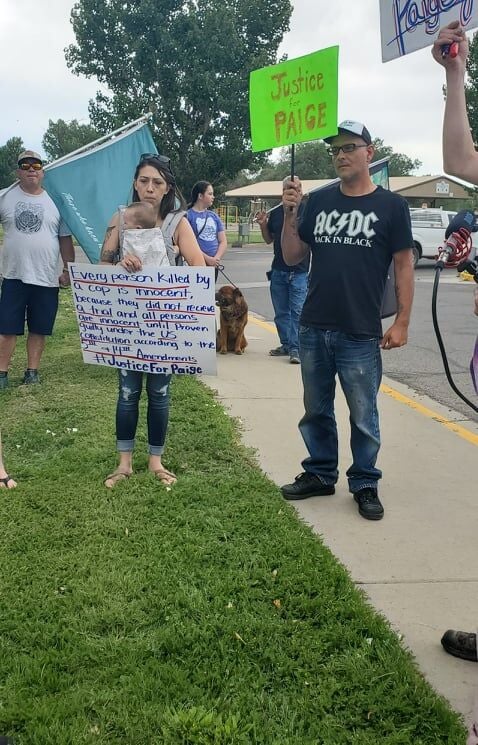 Protesters hold signs after a press conference on June 23, 2021 in Delta in which District Attorney Seth Ryan told media charges would not be brought against an officer who fatally shot Paige Schmidt Pierce in April. 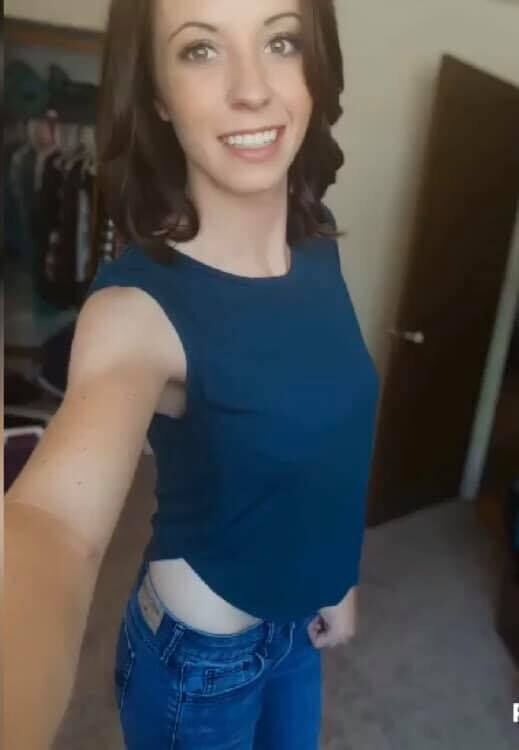 Protesters stood outside the Bill Heddles Recreation Center in Delta on Wednesday, chanting for justice for Paige Schmidt Pierce, the Austin woman fatally shot by Deputy Nolan Davis in April.

At a press conference inside earlier, District Attorney Seth Ryan said the deputy had acted in self-defense when he fired eight shots into Pierce's windshield and car as it bore down on him in a private drive near Hotchkiss, in full view of a civilian on a ride-along, as well as two other witnesses.

Her car came within feet of the deputy after he stepped out of his vehicle, Ryan said, and although she could have diverted to get around him, she did not.

"About to hit me, Sarge. I had no choice," Davis can be heard saying on body camera footage. (The audio is missing for the first 30 seconds.)

The encounter began when Davis attempted to pull Pierce over on Highway 92 because her car did not have license plates. Pierce drove off at a high rate of speed, passing a column of vehicles in a no passing zone. A worker on the highway said he had to wave his arms as she sped toward him on the shoulder. He then directed Davis to Hidden Springs Road, where the pursuit continued onto private property. There, a man was pulling out and another man was in his yard.

The body camera footage, which was shared at the press conference and released a few hours later on YouTube, starts approximately two and a half minutes before Davis opened fire. Ryan said that investigators relied on eyewitness accounts to reconstruct the entire situation.

Because Paige's tires had been deflated by spike sticks, Davis got out of his patrol truck, planning a foot pursuit, Ryan said. At the time that he exited his vehicle, Paige was still driving in her car.

Investigators determined that at the speed Paige was traveling (15 mph) and the distance between her and Davis' car, she could have stopped at least one car length before him.

Paige's car kept coming, causing the civilian in the patrol unit to throw up her arms as if to brace for impact. Another witness told of Pierce "shooting the gap" between vehicles, rather than diverting around. The state patrol later determined it took her 1.8 seconds to close the distance.

"Her trajectory fairly straight on toward Deputy Davis until the approximate time he opened fire on her," said Ryan.

The deputy kept firing because he thought she could turn the wheel and paste him against his unit, Ryan also said.

A witness said it appeared as though Pierce was about to hit the deputy.

Ryan assessed the findings of a critical incident team that deploys to investigate use of deadly force. His purpose is to determine whether the law was broken and whether the evidence presented can prove beyond reasonable doubt the conduct was not self-defense.

His office cannot disprove self-defense, he said, and cannot meet the burden of proof necessary to bring criminal charges.

Outside, protesters shouted "murderers" and said Pierce was killed unjustly.

"You're the cops, not God," Pierce's brother Robbie Schmidt exclaimed.

"It did not have to happen," another family member said, noting that Delta County authorities had terminated other chases.

"She just didn't have plates and she was afraid," the family member said.

In response to questions from the Montrose Daily Press, Ryan said the DCSO declined to provide its policy on pursuits and pursuit termination. He also did not have information about the results of an internal investigation by the department.