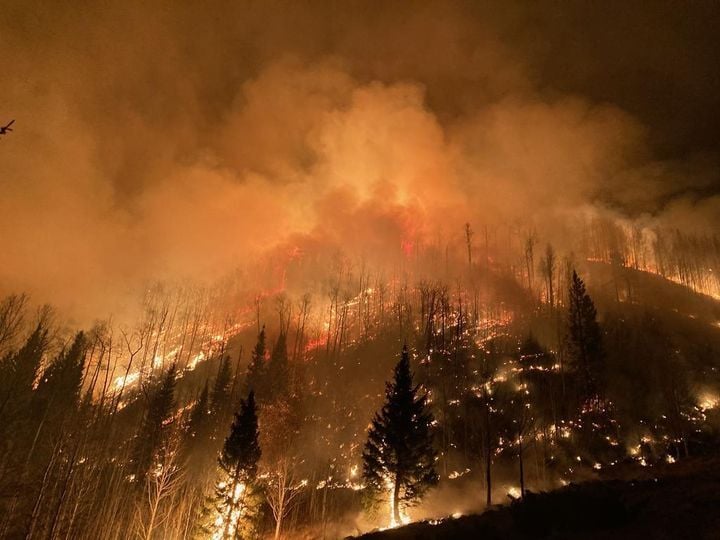 The Ice Fire burns in the night near Silverton. 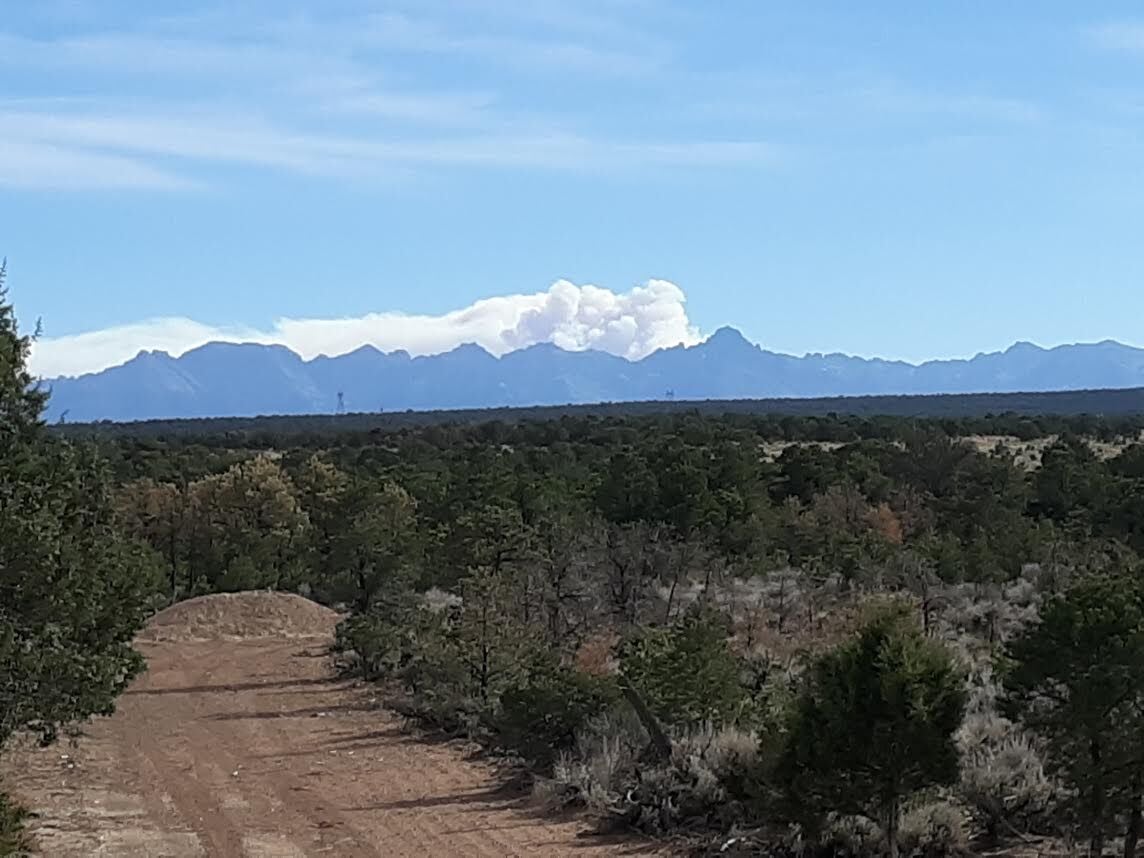 Smoke billows from beyond Sneffles, rising from the Ice Fire near Silverton.

The Ice Fire burns in the night near Silverton.

Smoke billows from beyond Sneffles, rising from the Ice Fire near Silverton.

Overnight Tuesday, crews and helicopters made progress, bringing containment to 15%.

“One of the biggest concerns is we received the spot weather forecast — warm, dry and windy, with a lot of potential for a smoke column to grow,” said Esther Godson, a public information officer on the fire Tuesday.

The smoke column and weather are of concern for the next several days, even with some moisture possibly on tap for Sunday.

Tuesday night brought less wind than previous days. The work of ground crews and choppers put suppression efforts in a better position, the incident commander said in a post made to Inciweb, the government’s fire information system.

The fire erupted Monday, about 5 miles west of Silverton, near the Ice Lakes Trailhead, on the north side of South Mineral Road.

It is blazing through heavy, mixed conifers on U.S. Forest Service Land.

Suppression efforts were targeted at keeping the fire to the north of South Mineral Road and west of U.S. 550. Wednesday, crews planned to attack a part of the fire’s edge, north of the South Mineral Creek Campground, conditions permitting.

“We’re really using aircraft quite heavily. It is extremely steep terrain. The aircraft we have have been critical,” Godson said.

“We’re trying to use them as a natural barrier. (Monday) night, we did do some burn-out to connect those avalanche chutes in a controlled fashion,” Godson said.

Tuesday brought two more crews; a total of 100 people were assigned to the fire as of Tuesday night. Resources also include an air attack unit, helicopters, single-engine air tankers, a heli-tack crew and a fire suppression module.

“The weather isn’t in our favor right now, but hopefully by using those natural barriers, we can make some progress,” Godson said Tuesday.

Crews prepared on Wednesday to fight the fire directly in the drainage west of the Ice Lakes trail and use air resources to slow the fire’s spread upslope.

Fire officials urge Coloradans and those passing through to pay attention to fire danger, which is on the rise because of winds and critically low relative humidity.

The San Juan National Forest is closed in the area of the fire, in the Mineral Creek watershed and all Forest Service lands bounded in the north by Ophir Pass Road (National Forest System Road 679), south to the southern ridge above South Mineral Canyon. That includes Rolling Mountain, Twin Sisters, Bear Mountain, U.S. 550 on the east to the forest boundary with the Uncompahgre National Forest on the west.

To that end, people traveling along U.S. 550 in the burn area should not stop to look at the fire or take pictures.

“Most of the public has really respected the situation and avoided the area, but that U.S. 550 corridor is a difficult road, so with the smoke impacts, that’s been really important. The safety concern is we want to make sure people avoid the area and give fire operations space,” Godson said.

As always, people need to remember that flying drones in active wildfires is prohibited. The drones can interfere with air traffic radio communication and if unauthorized drones are in the area, air resources will have to be grounded, impeding firefighting efforts as well as potentially endangering crews.

The state division of fire prevention and control also reminds people to check for all local fire restrictions; have care with anything that could start a fire; make sure tow chains are not dragging the ground; not to park vehicles over dead grass and to avoid driving through tall grass, since vehicles can spark these dry fuels.

When camping, never leave the fire unattended and make sure it is completely out and cold before leaving or going to sleep at night. Too hot to touch equals too hot to leave.

Fire danger is high in San Juan County and Stage 1 fire restrictions are in place on the San Juan National Forest.

The Ice Fire is one of several burning in the state.

The massive Cameron Peak Fire, burning since mid-August, is at more than 205,000 acres near Fort Collins and has prompted multiple restrictions and closures, as well as evacuations.

The East Troublesome and Williams Fork fires are burning in Grand County. The Middle Fork Fire was at last report burning in the Routt National Forest, while the Mullen Fire is burning in parts of Jackson County, but mostly in Wyoming.

This many later-season wildfires are not common.

“We call it the fire year now,” Godson said.

“We are in extreme drought. We have had a very high fire danger for a long time. Usually this time of year, we have a dusting of snow on the mountains and the leaves have been blown off by some weather, and that hasn’t been the case.”