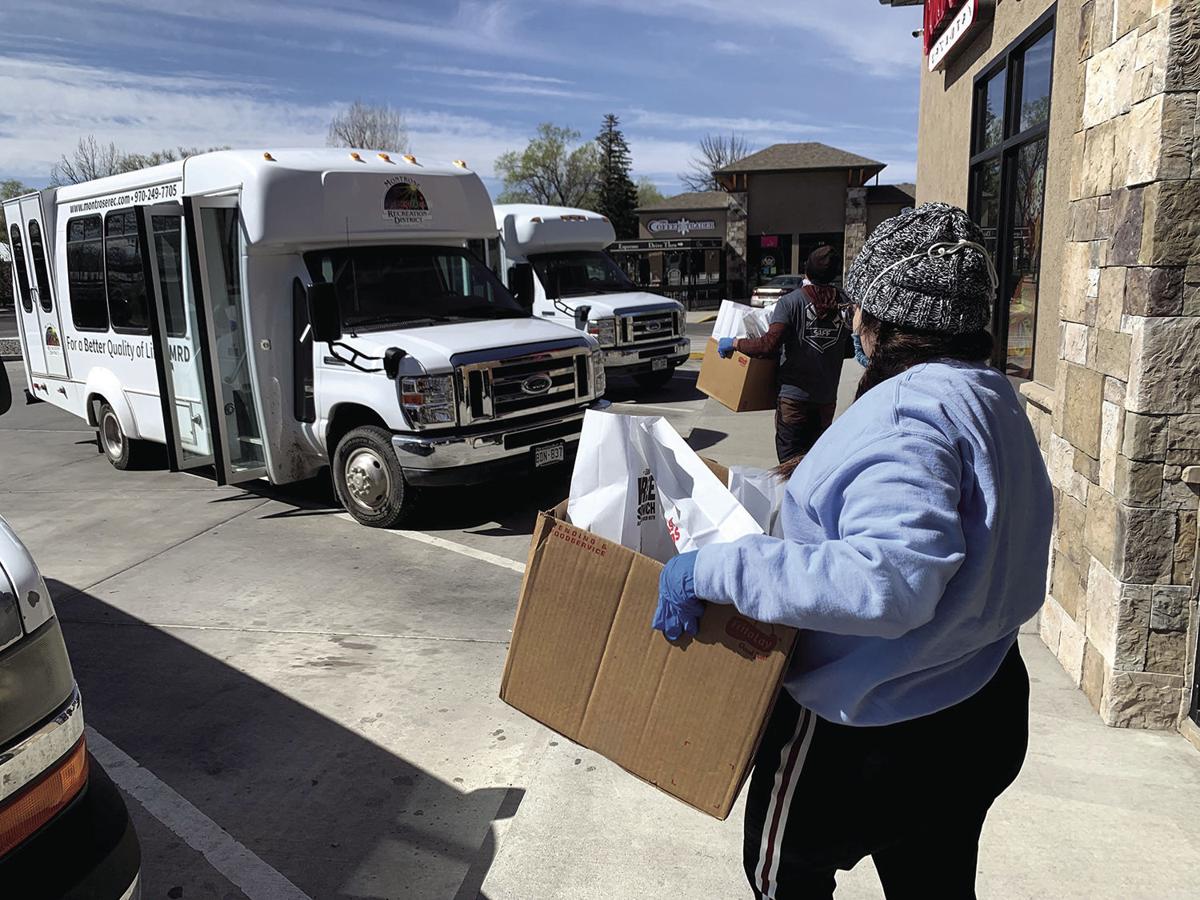 Montrose Recreation District staff pick up meals for locals in the community. Local residents have seen an overwhelming ammount of support from non-profits for food resources. SNAP benefits have helped individuals with their financial situation. 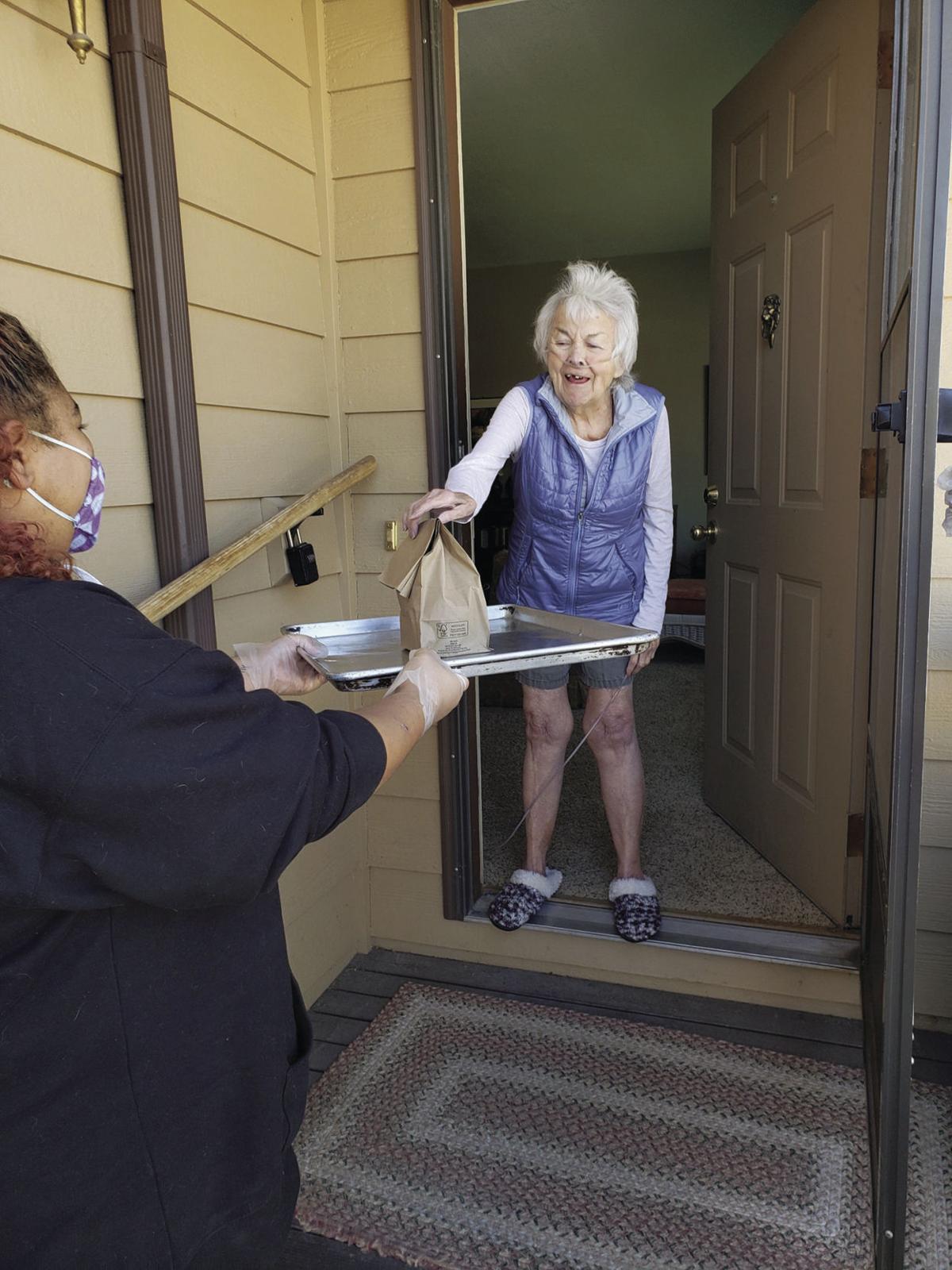 A CASA volunteer delivers a meal to a local resident.

Montrose Recreation District staff pick up meals for locals in the community. Local residents have seen an overwhelming ammount of support from non-profits for food resources. SNAP benefits have helped individuals with their financial situation.

A CASA volunteer delivers a meal to a local resident.

Over the past month, demand has increased for food donations in Montrose. But for several organizations in the community, that hasn’t been a problem. With an influx of volunteers and a strong food supply, it’s been a swift effort helping those in need.

In particular, Garey Martinez, founder of the Shepherd’s Hand in Montrose, didn’t panic when demand increased for meals at Cedar Creek Church — the distribution site where Shepherd’s Hand hands out emergency food boxes three days a week. Martinez already had a strong system in place. All he and his volunteers had to do was execute it.

“I’m very thankful,” he said. “For the last year Shepherd’s Hand has been putting a system in place. Slowly but surely, we’ve increased our network.”

The network has allowed Martinez to accumulate meals from a variety of sources, including Food Bank of the Rockies, which also supplies Sharing Ministries in Montrose.

With an increase in funding, even more food has been available to those in need.

Martinez said he’s seen around a 15 to 20 percent increase of new people looking for meals. His organization has nearly doubled the amount of people it’s been serving since COVID-19 restrictions were enacted — the homeless population and those with low income are a few groups Martinez has helped serve.

“We’re continuing to see an increase on a daily basis,” he said. “We've seen a number of people send donations to us. Without that assistance, we wouldn't be able to keep up with this surge in demand.”

“We're very thankful for that.”

Region 10, a non-profit organization in Montrose, partnered with Divot, a restaurant at the Black Canyon Golf Course, to deliver a hot lunch once a week to three senior apartment complexes. Backstreet Bagel and Court Appointed Special Advocates (CASA), too, have helped Region 10 provide meals. At one point, there was so much community support that there were more volunteers than Region 10 had jobs for.

Region 10 has also partnered with All Points Transit, a non-profit organization that provides public transportation. Their staff delivers food boxes and groceries to the elderly community, wearing masks, gloves, and utilizing no contact delivery.

“We're taking a lot of groceries to people,” Veitch said. “Quite a few more people are getting food bank deliveries then they were in the past. We’re trying to get food safely to older adults and support our local businesses as much as we can at the same time.”

“It has made a huge impact,” she said. “The impact back to the business community is just as important. It’s giving a couple of small, niche local businesses a chance to keep the doors open. It's been very important for them.

“It's well worth it. We're getting seniors hot food and keeping them safe,” she added.

Region 10’s frozen meal program has expanded. Veitch estimates a 5% increase in the number of recipients of frozen meals, which are six meals delivered every other week.

The frequent volunteers and delivery process has helped build relationships, even with the no contact delivery system in place.

“The relationships that are being built through that program are really cool to watch,” Veitch said.

The community outreach doesn’t stop there.

Back in March, when the closures began, Montrose Recreation District board vice president Jason Ullmann knew the Rec Center would follow suit. So he and Mari Steinbach, MRD’s executive director, figured it was the perfect opportunity to offer some assistance and keep additional staff employed.

Using two 15 passenger buses and a van, MRD staff has helped deliver meals provided by the school district to families in Olathe and Montrose who can’t make it to pick up locations. Many of those families participate in the rec programs, Ullmann noted, giving a chance for staff to see those families even though the facility is closed.

“It was a good service that we could provide with staff that we have available,” Ullmann said.

“The families have really expressed their gratitude for the deliveries.”

Through the program, MRD staff has helped provide nearly 200 meals a day, Monday through Friday, to local students. Staff will help with the program through the end of May.

Without the community support, there would be some challenges keeping up with demand, Martinez noted. But that hasn’t been the case. It’s been a community effort, and one that’s helped feed many in need.

“I would like to emphasize the Montrose community for their support in terms of volunteer, prayers and financial support. We're very thankful for that.”

Sharing Ministries Food Bank, located on 49 North 1st St., too, has helped those in need during the pandemic. The food bank is open from 9:30 a.m. to 12:30 p.m. Monday through Wednesday. On Thursday, it is open from 9 to 11:30 a.m. and 12 to 2 p.m. For Friday, availability is 9 to 11 a.m. The organization is making every effort to meet the needs of those who are temporarily unemployed and/or are at high risk. For more information, visit sharingministries.com or call (970) 240-8385.