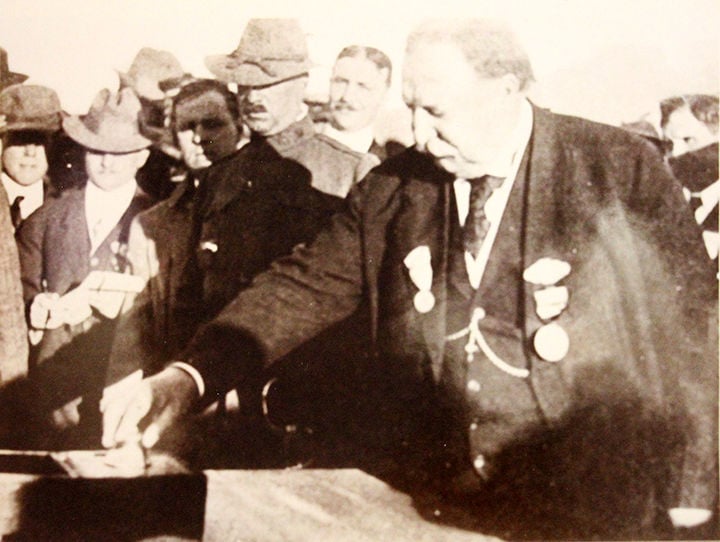 President Taft rings the bell at Lujane for the official dedication of the Gunnison Tunnel. On a platform 75 feet above the tunnel entrance, President Taft tapped a bell of pure gold, releasing the flow of water through the tunnel at 4:30 p.m. (Submitted photo) 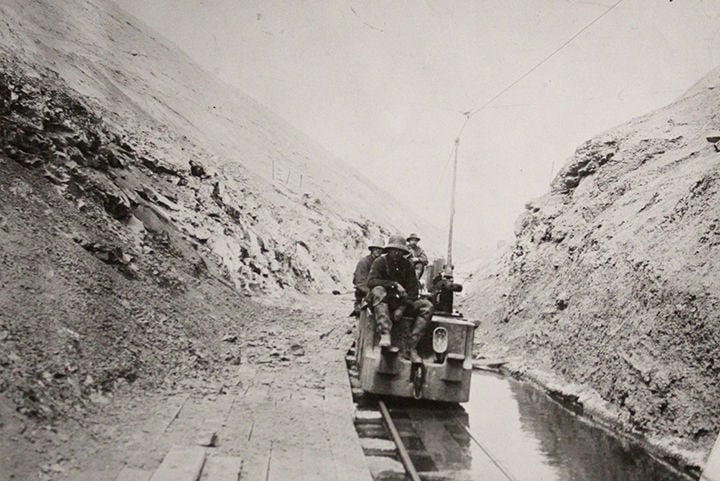 Miners led by foreman Bellgardt going into the mine. (Submitted photo) 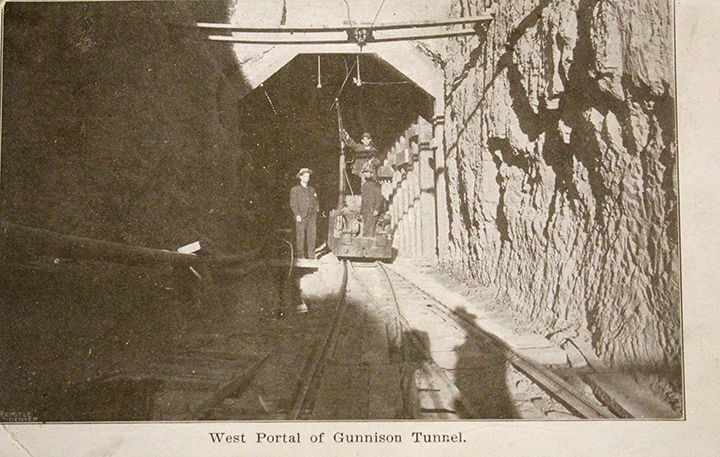 An old postcard depicts the West Portal of the Gunnison Tunnel. On the back of the postcard, it reads, “Pub. by Johnson & Wright, Montrose, Col.” 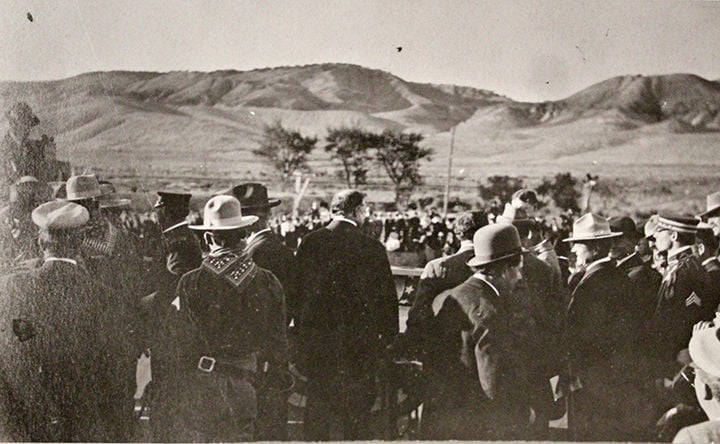 President Taft addresses the public during the mine celebration. Taft was surrounded by local sheriffs. (Submitted photo) 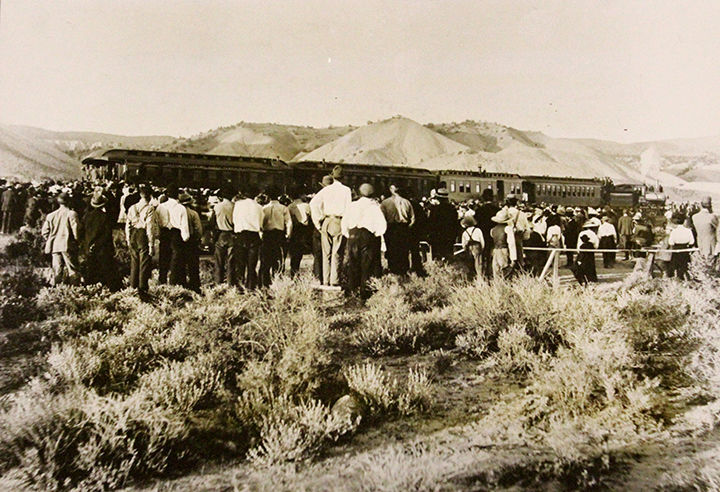 Area residents gather to welcome the train carrying President Taft to the dedication of the Gunnison Tunnel at Lujane. The location is near the present-day south entrance to Black Canyon National Park. (Photo courtesy of Montrose County Historical Society) 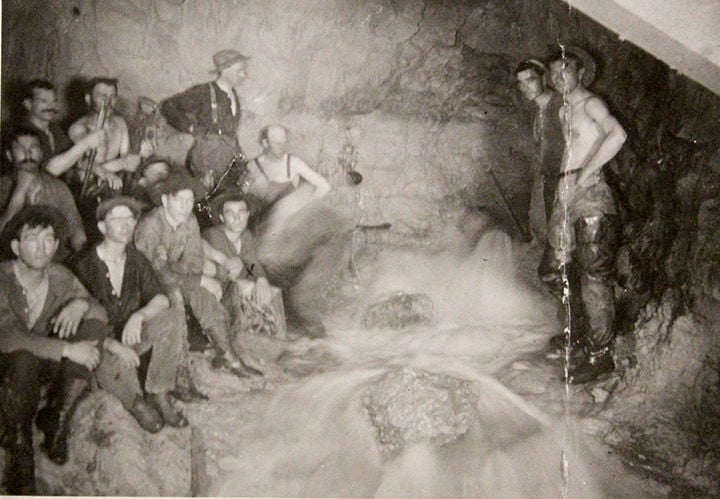 Underground hot springs were hit during the dig that stopped work for six months. (Submitted photo)

Editor’s note: This story first appeared in The Black Canyon section of the Montrose Daily Press newspaper in October 1999.

Deep within the interior of the Gunnison Tunnel without the aid of artificial light, total darkness is all-encompassing. There is a sense of what the men who worked on this historic tunnel endured over the long period of construction from 1904-1909. It was said that out of the estimated $3.3 million spent on the tunnel, $24,000 was for candles used in miner’s candlesticks.

In the early history of western Colorado, there were several important events which led to the settlement of the Uncompahgre Valley. As far back as 1873, 4 million acres of the Confederated Ute Reservation had been valuable farming land. The final removal of the ute Indians by the U.S. in September 1881 eliminated the supposed threat to the security of the white man and opened another frontier to westward-moving settlers. The Homestead Act of 1862 (and its subsequent revisions for the semi-arid region of the Southwest) offered new hopes and opportunities for America’s immigrants. Also, the coming of the railroad to Gunnison and eventually to Montrose in the early 1880s secured a link to outside civilization and to eastern and coastal markets.

While these events set the stage for settlement of the Uncompahgre Valley, the history Gunnison Tunnel Project attracted immigrants from all over the world, many of whom came West in search of jobs and a better way of life for their families.

The immigrants and their families lived in government towns located at both ends of the tunnel. East Portal was a camp of approximately 150 workers situated in the Black Canyon Gorge. The only road to and from the East Portal was a treacherous, nine-mile wagon road that dropped nearly 3,000 feet from the canyon rim to the river below.

East Portal’s sister city was known as Lujane. Located 10 miles east of Montrose near the West Portal of the tunnel, the town of about 800 was located in an open clearing next to Cedar Creek.

During tunnel construction, drilling was underway at four different locations: the west and east portals and a vertical shaft which branched in two directions. The six-mile tunnel had to be lined with concrete and over five million feet of rock had to be removed to dig a tunnel 11 feet wide and 13 feet high.

There were approximately 500 men employed at any one time on the project, and the average stay per worker was only two weeks. Slow, tedious work, day after day, accounted for the high turnover rate, along with dangerous and risky conditions inside the tunnel.

By today’s standards, the average pay of $2 to $2.50 per day for tunnel laborers hardly seems adequate compensation for the extreme hazards the workers faced.

Workmen often ran into soft, dry adobe or sandstone and pockets of combustible, poisonous gases. Lighting in the dark crevices was supplied by candles on spiked holders. Workers in this dismal interior often developed dry, hacking coughs from the lack of adequate ventilation and the damp atmosphere.

In December 1906, workmen struck a large underground stream of water that shot 40 feet into the tunnel. With a powerful gush of water, drillers were knocked from their machines and work in that area was halted for six months. Hot water veins made work unbearable until a 400-foot ventilation shaft could be built.

A tragic event occurred in 1905 when a cave-in of a fault zone held 30 men prisoners. Enclosed in darkness, the men waited in desperation for 72 hours. Six men died.

Despite the high turnover rate, hazardous conditions and inevitable setbacks, an engineering milestone was reached on July 6, 1909, as the last charge of dynamite was fired and the crews from the last two heads met and holed through — with only a 3-inch variance at the point where the two tunnels met. Much-needed irrigation water could now flow through the tunnel to thousands of fertile acres in the Uncompahgre Valley, and Montrose residents busily prepared for a celebration like none other.

A group of Montrose citizens known as the “Gunnison Tunnel Opening Committee” planned a grandiose one-day celebration for Friday, Sept. 23, 1909. The highlight of the day would be a dedication ceremony by President William Howard Taft at the West Portal of the tunnel (Lujane). Other planned events included band concerts, product exhibitions, speeches, receptions, train rides to the West Portal for the dedication, a balloon ascension, girls relay race on bucking broncos, parachute leaps and a large parade.

A huge “Welcome Arch” was constructed over main Street in Montrose with pictures of President Taft and a listing of agricultural products of the area — how much had been grown during the past year — and what the completion of the Gunnison Tunnel meant for agriculture in 1910.

The day of the celebration finally arrived, along with thousands of sightseers from all over the Western Slope. Many visitors came by train from outlying areas. The town of Ouray brought a pack train showing the means of transportation to and from the mines of the San Juan Mountains, and a motorcade from Delta featured occupants carrying red and white umbrellas.

At approximately 2:30 p.m., President Taft arrived in Montrose aboard a special five-coach train, escorted by the sheriffs of western Colorado wearing their traditional 10-gallon hats, bandanas, blue flannel shirts and corduroy pants, each carrying a Colt .45 in a holster. Nearly 10,000 people had gathered at the Montrose fairgrounds to greet the president.

After a welcoming address and presentation of the key to the city by the mayor, the festivities moved to Lujane for the official dedication of the Gunnison Tunnel. On a platform 75 feet above the tunnel entrance, President Taft tapped a bell of pure gold, releasing the flow of water through the tunnel at 4:30 p.m. While the crowd cheered, Reclamation officials fired salutes and at the fairgrounds in Montrose and the ascension balloon was released. Bells sounded all across the Uncompahgre Valley reverberating through the still, autumn air declaring to the world that the longest irrigation tunnel in the United States had just been opened.

Following the dedication, the presidents returned to Montrose for dinner and later that evening boarded his train to return to Washington. Residents of the Uncompahgre Valley would always remember the day the president came to town, for it truly was “the day of days” for Montrose.

Many of the immigrants who worked on the Gunnison Tunnel remained in the area following the completion of the project. The reliable and steady flow of irrigation water to thousands of thirsty acres opened a new era of large-scale farming in the Uncompahgre Valley.

Today, the project, which is maintained by the Uncompahgre Valley Water Users Association and overseen by the Bureau of Reclamation, delivers an average of 1,000 cubic feet of irrigation water per second to the valley during the spring, summer and early fall months.

Elaine Hale Jones is a lifetime resident of Montrose and currently lives on her family’s homestead ranch. She has written several books about the history of Montrose, the west and the Gunnison Tunnel. You can find her books at the Montrose Farmers Market on Saturdays from 9 a.m. to 1 p.m.