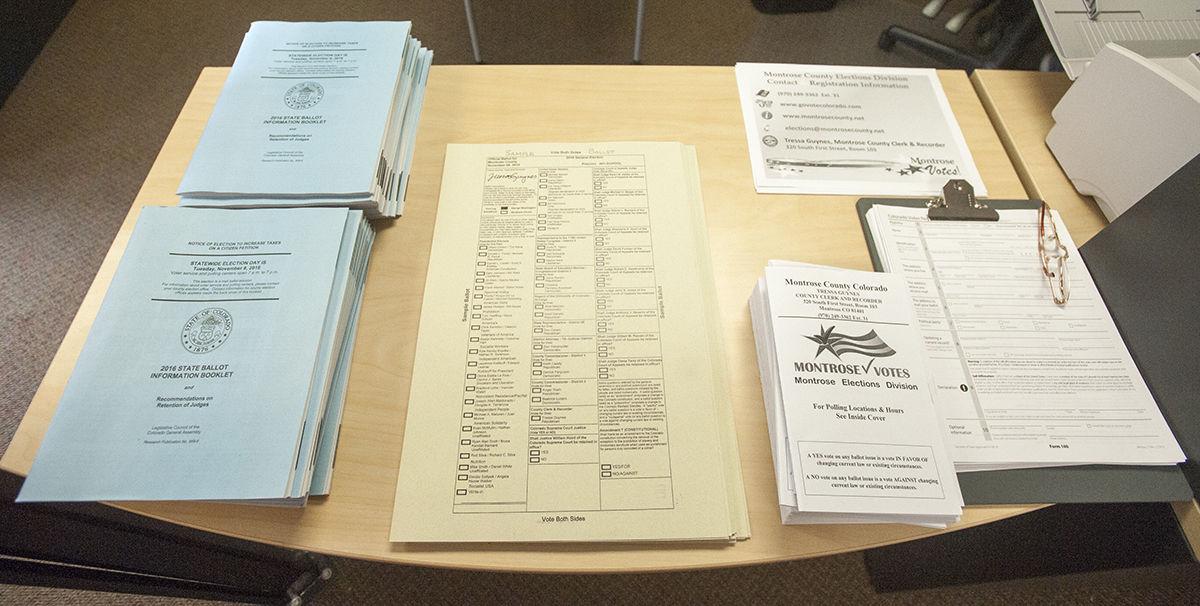 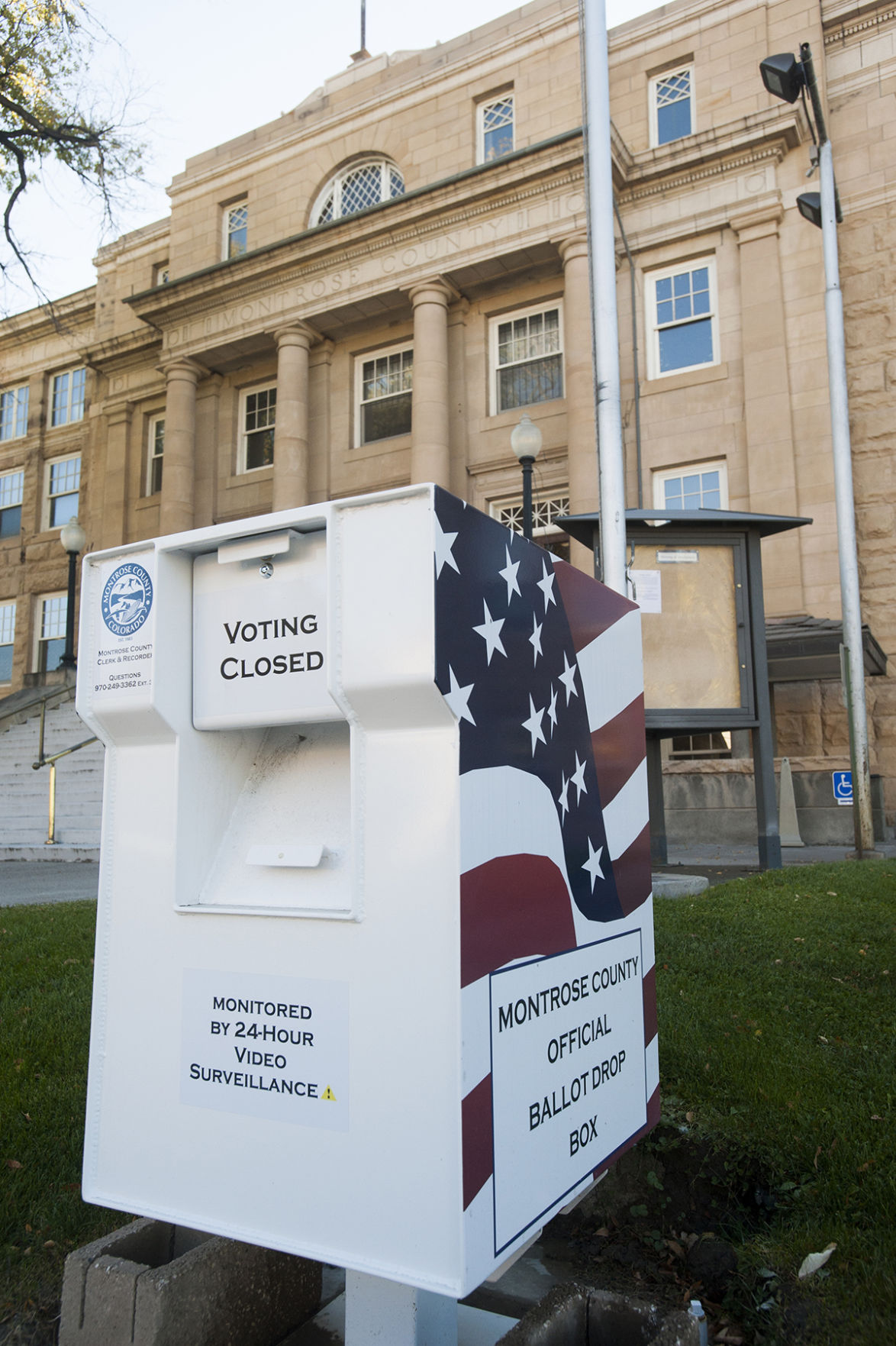 The newest version of the Montrose County Official Ballot Drop Box stands outside the county building on South First St. The drop box is monitored 24-hours with video surveillance to prevent vandalism and tampering. 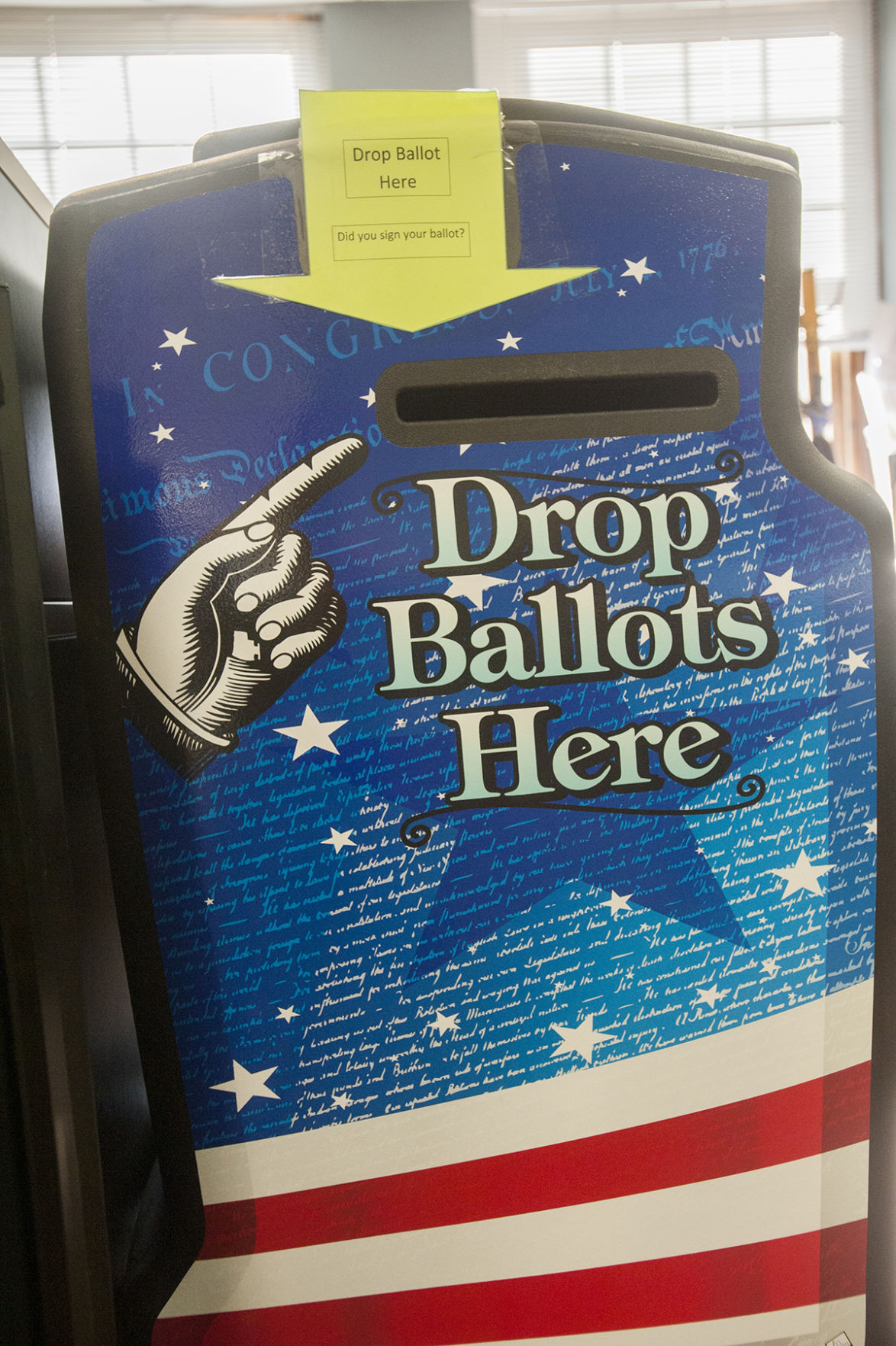 An older style of the ballot drop box sits inside the Montrose County Elections office. 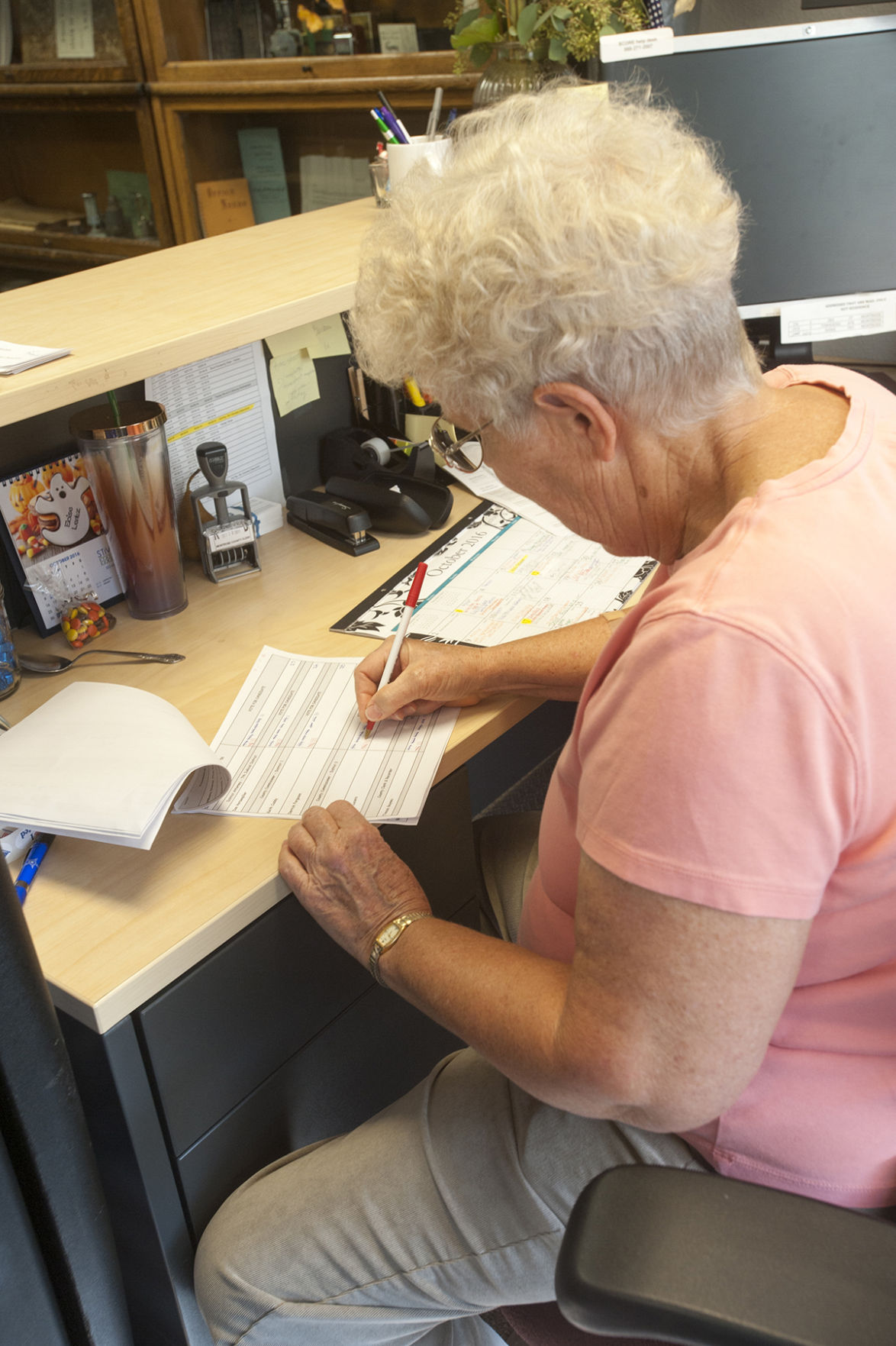 Connie Pittenger performs paperwork as part of logic and accuracy testing of the voting system at the Montrose County Clerk and Recorder’s Office on Oct. 13.

The newest version of the Montrose County Official Ballot Drop Box stands outside the county building on South First St. The drop box is monitored 24-hours with video surveillance to prevent vandalism and tampering.

An older style of the ballot drop box sits inside the Montrose County Elections office.

Connie Pittenger performs paperwork as part of logic and accuracy testing of the voting system at the Montrose County Clerk and Recorder’s Office on Oct. 13.

The Montrose Daily Press is highlighting three key amendments: Amendment 69, which proposes single-payer health care; Amendment 70, which seeks to raise the minimum wage and Amendment 71, which would change the requirements for amending the state constitution.

Amendment 69: Budget-killer or past due?

Amendment 69, which proposes a single-payer health care, has drawn stiff opposition from some camps, among them, the Montrose Chamber of Commerce and the Western Slope advocacy coalition, Club 20.

“Amendment 69 must fail,” said Club 20 Executive Director Christian Reece. “That’s all there is to it.”

Proponents say, however, that the proposal is long past due, as health care bills climb. The League of Women Voters Colorado has officially endorsed Amendment 69.

“Every U.S. resident should have access to a basic level of care that includes the prevention of disease, health promotion and education, primary care, including prenatal and reproductive health, acute care, long-term care and mental health care,” Nancy Crow, president-elect of LWV-Colorado, wrote in the body’s position paper.

The league is a nonpartisan organization that educates voters, but also advocates when the body takes a position on an issue. These positions are based on study and consensus that determine whether a particular bill aligns with the league’s positions and policies.

“If so, the reasons and rationale are presented to the board and voted upon and, if passed, are advocated for,” said Nancy Ball, secretary of League of Women Voters of Montrose.

The endorsement of Amendment 69 occurred at the state-body level.

“The League of Women Voters does not normally support amendments to the (state) constitution,” Ball said.

Not everyone favors the amendment.

“We oppose Amendment 69, strongly,” said Bob Brown, Montrose Chamber board member. “On so many levels, we’re against it.”

Amendment 69 proponents tout the measure as one that will provide everyone with health care coverage, as well as improve access to, and quality of, that care.

Under the amendment, or “ColoradoCare,” there will be no co-pays or deductibles for primary and preventative care, State Sen. Irene Aguilar, leading proponent, said during a September visit to Montrose.

On average, businesses that provide insurance are paying 13.5 percent.

The self-employed are responsible for the entire 10 percent payroll tax, but can claim state and federal tax deductions, giving them an effective contribution rate of 5.777 to 8.537 percent, Aguilar said.

The amendment wouldn’t go into effect if the state does not receive waivers for Affordable Care Act and Medicaid funds. If too few providers participate that, too, will prevent the amendment’s implementation.

While critics cast a jaundiced eye on the price tag — projected at $25 billion a year — Aguilar said the amendment will save at least $30 billion per year.

The Montrose Chamber is dubious.

“If taxes were only on the payroll, some people would be for it, but they are also going to tax the bottom line another 10 percent on businesses,” Brown said.

“We’ve heard that in some number of years, there will be a $7 billion deficit. The $25 billion is certainly not going to be enough. We don’t see anything in there, even though it’s in the rhetoric, that’s really going to lower the cost of health care.

“We need a different solution.”

The Montrose County Republican and Democratic parties had not announced positions on Amendments 69, 70 or 71 before this section’s deadline.

“We have not taken a position locally (on Amendment 69) because we have heard pros and cons,” Montrose County Democratic Party Chairwoman Jayne Bilberry said.

“I have a committee working on a position for many of these (ballot) issues,” Montrose County Republican Party Chairman Scott Riba said. “Some issues, we will be of ‘no opinion.’”

“Public health is a public good,” said Beatrice Lucero, who is seeking election as a Democrat to the District 3 seat. As such, it is a function of government, she indicated during a candidate forum Oct. 13.

The perception that taxes paid go into a “black hole” is incorrect, Lucero said: “We get something out of it.”

Her Republican opponent Roger Rash opposes Amendment 69, which he labeled a “bad deal” and a “job-killer.” Rash further pointed to bipartisan opposition to the measure, which includes Democratic Gov. John Hickenlooper.

The candidates for District 1 expressed concerns. Keith Caddy, a Republican, said the measure will not be good for business, and business buttresses the community. To cover the uninsured, Colorado will for now have to make do with the federal Affordable Care Act, which is heavily flawed, Caddy said.

His Democratic opponent doesn’t favor Amendment 69: Derrick Ferguson said the measure is too vague. Ideally, there would be universal health care at a national level, which would spread the costs, he said.

“Minimum wage is one tool that can be used on the way to achieving equal opportunity, self-sufficiency, the reduction of poverty and a living wage, Crow said in the LWV-Colorado’s position paper.

But Brown and other opponents said the Western Slope and rural Colorado stand to lose businesses if the wage increase passes — this could effectively leave the workers Amendment 70 aims to help earning zero dollars per hour.

“It’s going to be damaging to our businesses, particularly because of our economic situation here,” Brown said.

“Retailers cannot pass on that expense. They’re going to have to swallow it, or reduce staff. Plus, it’s expensive.”

Amendment 71: Raising the bar – or snarling the process?

Is it too easy to amend the state constitution? Backers of Amendment 71 say it is — and the current process shuts out the people who live in less-populated areas.

Amendment 71 would require signatures from at least 2 percent of voters in each Colorado Senate district in order for an amendment to be placed on future ballots.

Now, if petitioners obtain a flat total of 5 percent of state voters, onto the ballot goes the proposed amendment — including Amendment 71 itself.

Amendment 71 also would require passage by a supermajority of 55 percent, rather than simple majority.

“The bar is too low right now. We know that on the Western Slope and all of rural Colorado, we’re getting short shrift. We really need (Amendment 70).”

Because the League of Women Voters-Colorado’s board supports part of the amendment, but has reservations about the geographical requirements, the body is not taking a position on Amendment 71.

The Montrose Daily Press was not made aware of opposition from local organizations.

According to the LWV’s educational pamphlet, opponents say passing Amendment 71 will make it harder to fix existing constitutional provisions and the supermajority requirement may confuse voters. Requiring signatures from 2 percent of voters within each district will make the amendment process more costly, serving to discourage grassroots efforts.

The Colorado AFL-CIO labor union federation in a statement indicated that Amendment 71 contains a poison pill in its fine print: the measure would make it easier for moneyed interests to control Colorado’s ballot process.

Brown said however that there is already outside investment in Colorado’s process. “At least they’ll have to have a broader approach,” he said.

Other measures on the state ballot pertain to removing the exemption that allows for unpaid prison labor; a limited exemption of possessory interests from property taxes; increasing the cigarette tax; allowing medical-assisted suicide with a number of restrictions; reinstating the presidential primaries, and allowing for open primary elections.

These measures, with pro and con statements, are fully defined in the Blue Book. The Montrose Daily Press is to publish a section of the Blue Book in Tuesday’s edition.

Where to drop a ballot, vote and deadlines

Weekdays starting Oct. 17: Montrose County voter service and polling centers open from 8 a.m. - 4:30 p.m. at the old courthouse, 320 S. First Street in Montrose and the clerk’s annex at 300 Main Street in Nucla, then Oct. 27 - Nov. 8, an additional location at the Nucla/Naturita Chamber of Commerce, 230 West Main Street in Naturita.

Voters can go to the centers to vote in person, request a new or replacement ballot, drop off a mail ballot, change voter registration information, register to vote or use accessible voting equipment.

Oct. 31 is the last day to request to have a ballot mailed.

Ballots must be received by the clerk and recorder’s office by  7 p.m. Nov. 8, or they cannot be counted. Do not mail your ballot back on Election Day; it will not arrive on time. Once Nov. 1 rolls around, it is advisable to hand-deliver your ballot.

Come Election Day, a dedicated cadre of volunteers will be assisting the public at Montrose County’s voter service polling centers.

Presidential election years tend to drive greater voter turnout; this year, one of the most watched races in history is also driving new voter…

Testing the balloting system is a good idea, as Montrose County Clerk and Recorder Tressa Guynes and her staff learned Thursday morning.