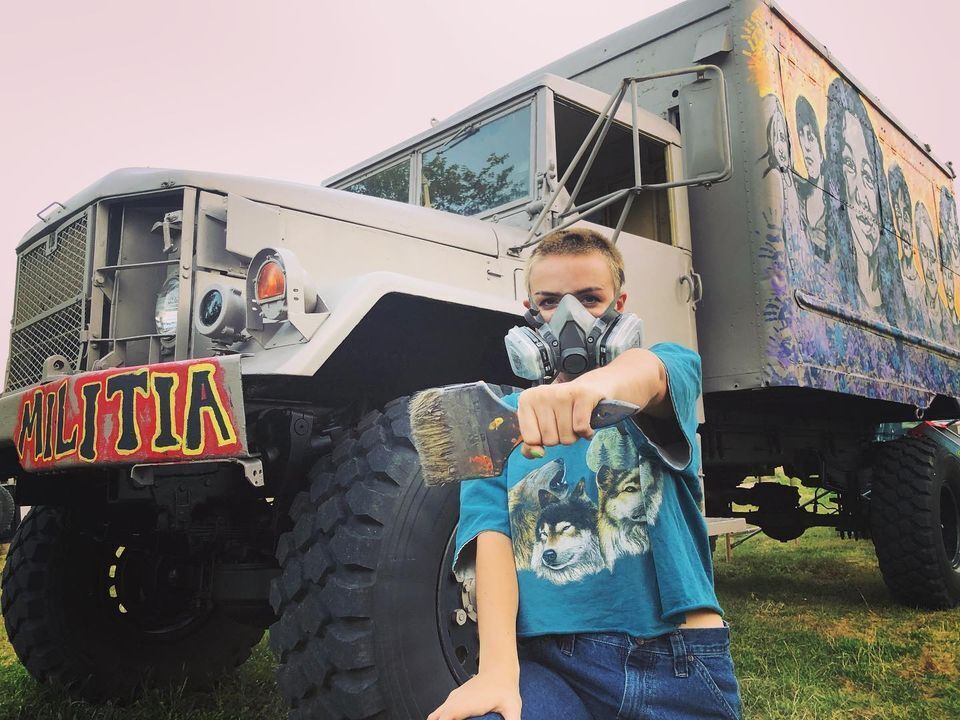 A young member of the Mural Militia prepares for another day of creating the visual masterpiece. 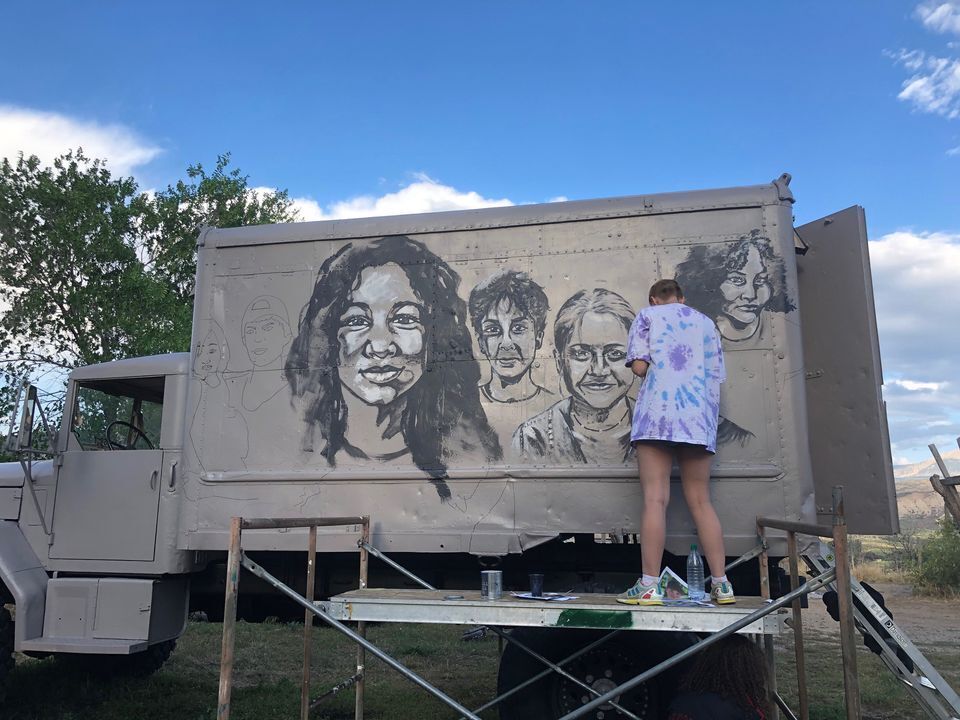 Young painter works on the 'hope' side of the mural. 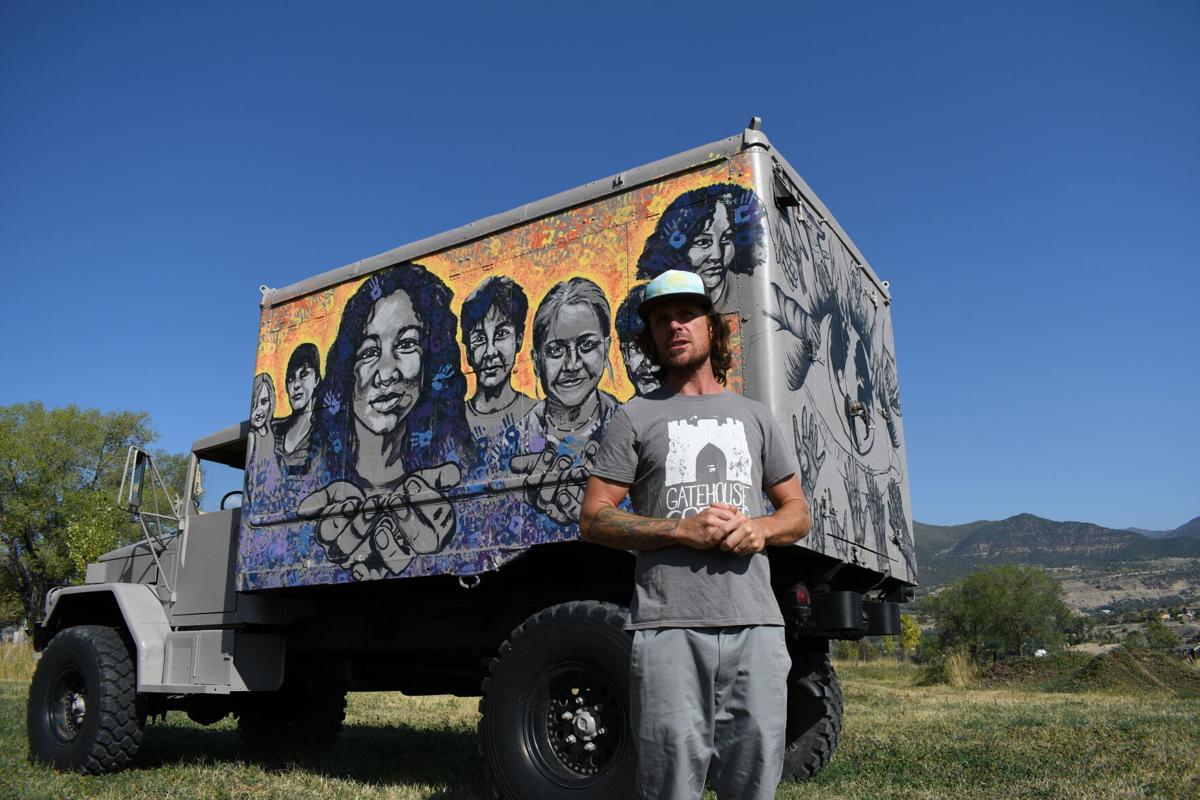 Seth Weber stands in the meadow with the retired military truck. 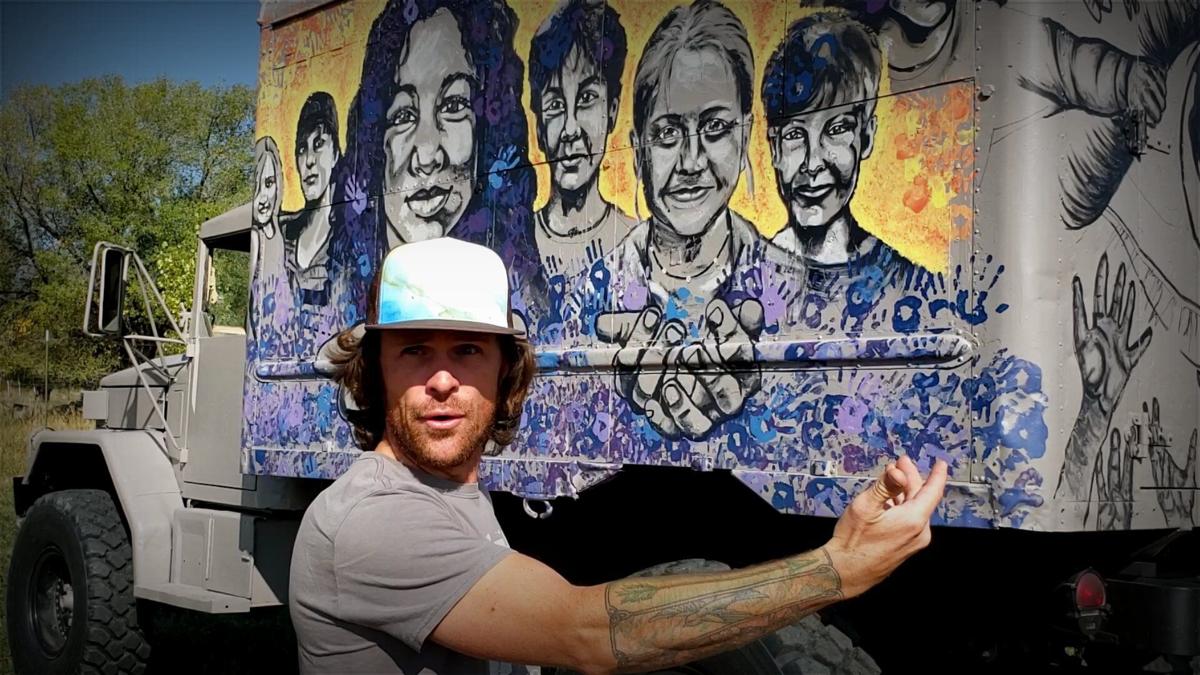 Artist Seth Weber explains the backside of the mural. 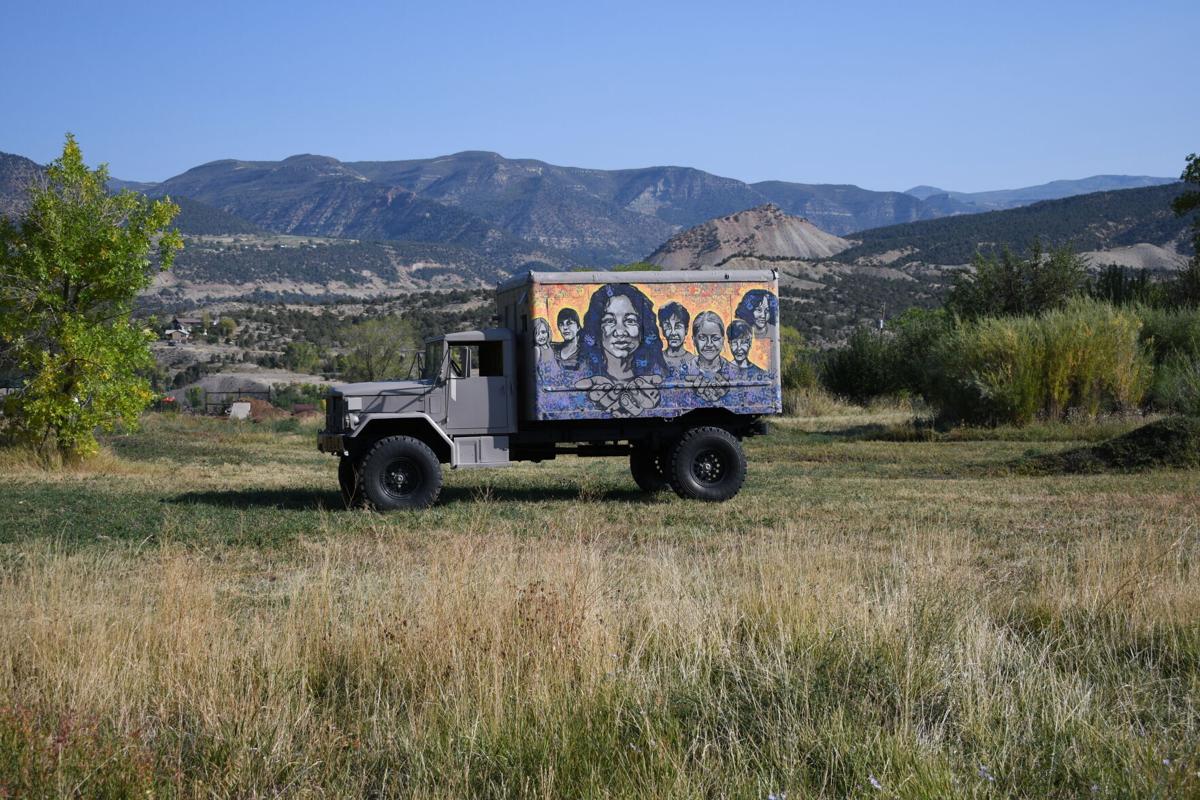 Sitting on Weber's farm, the gray military truck is slowly evolving into a stunning piece of art. 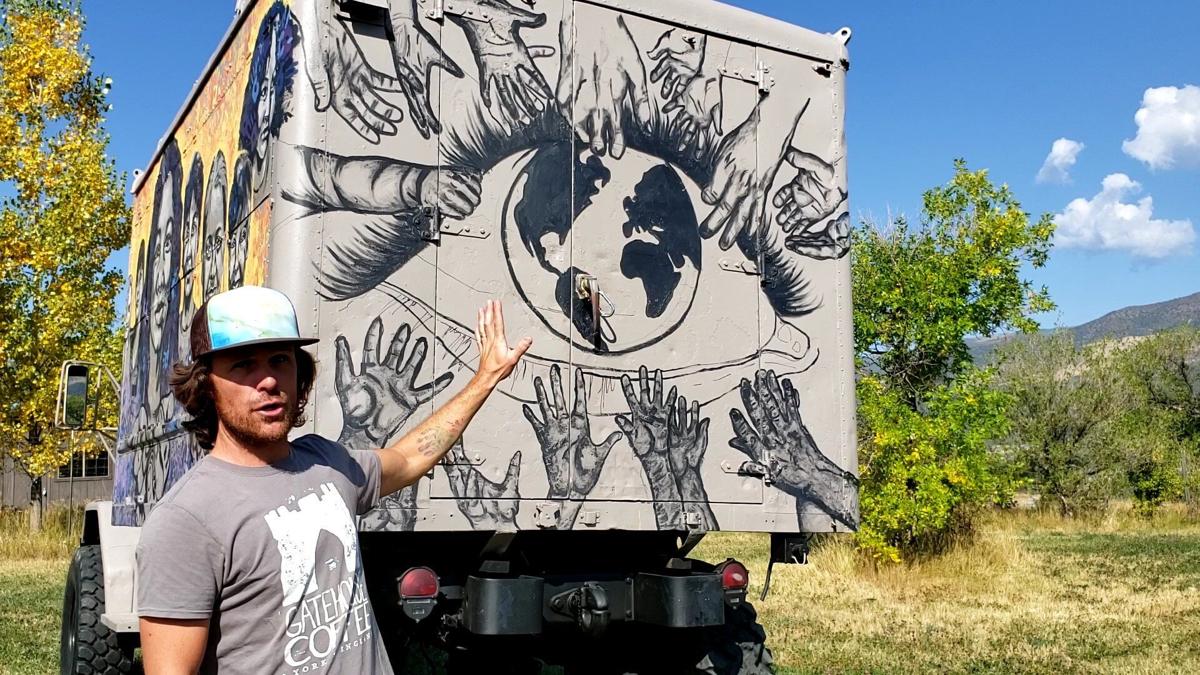 Artist Seth Weber talks about the 'hope' side of the mural. The faces are those of the young artists working on the mural.

A young member of the Mural Militia prepares for another day of creating the visual masterpiece.

Young painter works on the 'hope' side of the mural.

Seth Weber stands in the meadow with the retired military truck.

Artist Seth Weber explains the backside of the mural.

Sitting on Weber's farm, the gray military truck is slowly evolving into a stunning piece of art.

Artist Seth Weber talks about the 'hope' side of the mural. The faces are those of the young artists working on the mural.

A militia of young artists are transforming a retired military truck into a 3-D mobile piece of art under the direction of Seth Weber, a professional mural artist living on a quaint farm near Paonia.

Weber purchased the camo army truck with dreams of a “rolling mountain cabin” but fate would intervene before he could sell the truck when the wheels came off his scheme.

It took Weber’s 15 year old son and his friends who were looking for an outlet during the summer coronavirus lockdown, to define the truck’s next journey down life’s highway.

Seeing the teens desire to breakaway from a shutdown-induced dependency on social media and its negative effects, Weber’s creative engine began to roar into action.

“I thought, ‘I’d love to create a platform for them to express some of these really amazing thoughts they’re having and their ideas and their artwork and give them a chance to have a social experience together where we practice distancing.’ We’re outside working on a mural so it’s pretty easy to do,” the mentor said.

My first encounter with the massive military vehicle was on a cool Saturday afternoon in Paonia. The gray behemoth was parked smack dab in the middle of Grand Avenue during the Labor Day Weekend street closure. To be honest, I planned to avoid it thinking it was a military recruiting gimmick.

“Seriously, I just want to have some fun. I want to kick back, eat pizza and ice cream while I take in some good music,” I thought to myself looking away from the eye sore.

Later while visiting a voter registration booth, I was educated by two young ladies that the “ugly” thing was actually a cool inspiring piece of art created by area students. I returned to the scene and photographed several young artists perched on scaffolding creating the “hope” side of the mural. I was impressed and wanted to know more about the project.

My curiosity led me to Weber’s farm just outside of town where once again I was struck with the juxtaposition of the project. Resting in a meadow with majestic mountains in the background sat a “recycled vehicle of war” slowly evolving into a stunning piece of hope art.

“We have eight kids who’ve just been blowing my mind with their concepts, their enthusiasm and their awareness of what it looks like for them to bear light into this very uncertain future they’re stepping into,” Weber said, standing by the transforming piece of art.

So far, the art piece tells a compelling three-part story. Each panel can be viewed as a single story that is ultimately connected to the whole.

The apocalyptic side of the mural depicts a broken society addicted and hopelessly plugged into the dehumanizing effects of social media. From the back of the mural, a hand of hope which opens the “eye of the world” reaches around the corner and unplugs the head of a captive setting her free to join the hope side where fully awaken youth (mural militia artists) are bearing light into an uncertain future.

“The implementation part of it has been the part that just really blows me away,” said Weber. “It’s just such an exciting thing to see kids putting away their devices, picking up paint brushes and becoming an army of hope, an army of artists. I do feel for me that art in our society today is one of the best weapons against the hopelessness and the dehumanization and just the down right fear that people are living in constantly.”

Moving forward the Mural Militia plans to take its public art piece, complete with a mobile art studio in the old troop box, on the road beginning in Colorado and perhaps beyond. Weber envisions art shows tackling the big issues of our day while helping to raise funds for worthy causes.

“Our first show is going to be a fundraiser for our local skate park in Paonia,” said Weber, adding that the militia kids will also be painting skateboard decks for a silent auction fundraiser to raise money for Let’s Build North Fork Valley Skatepark.