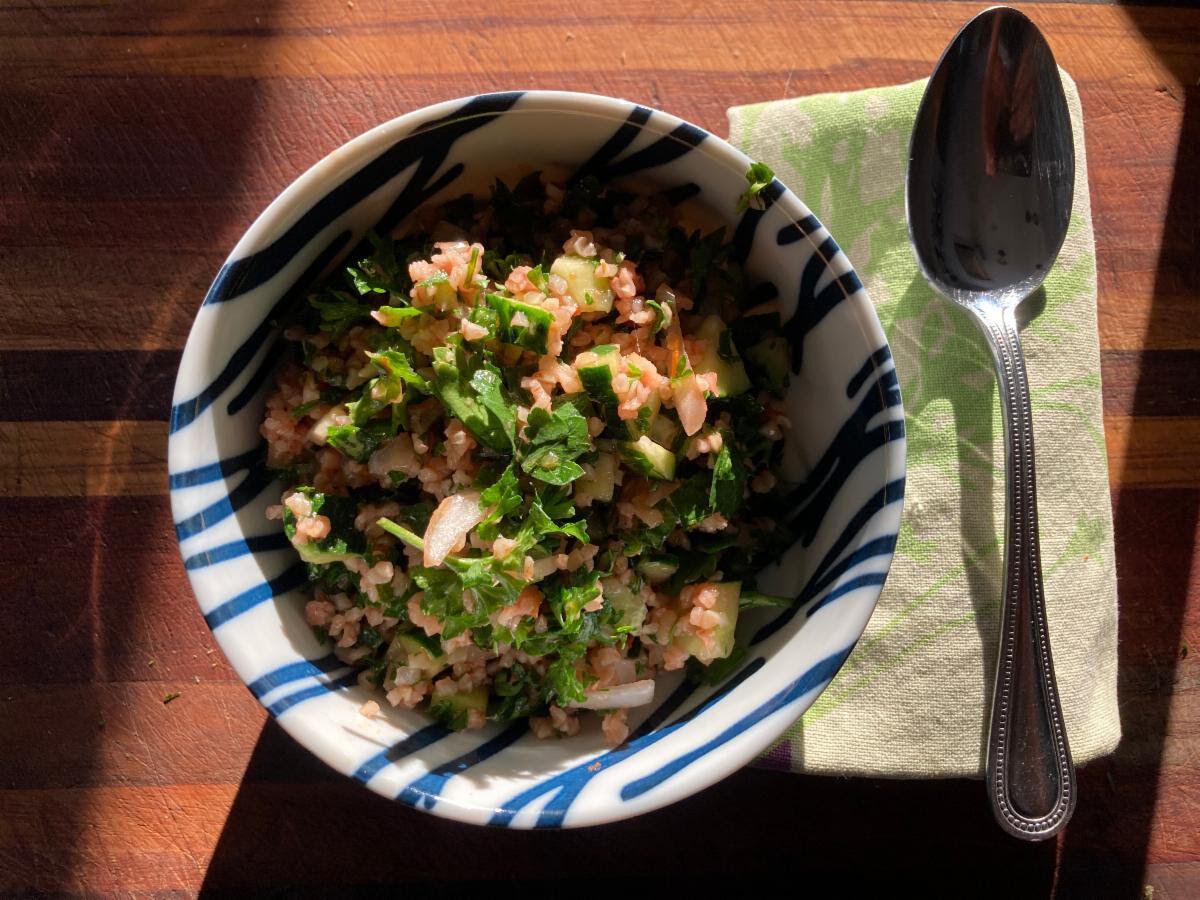 A bowl of tomato tabbouleh. 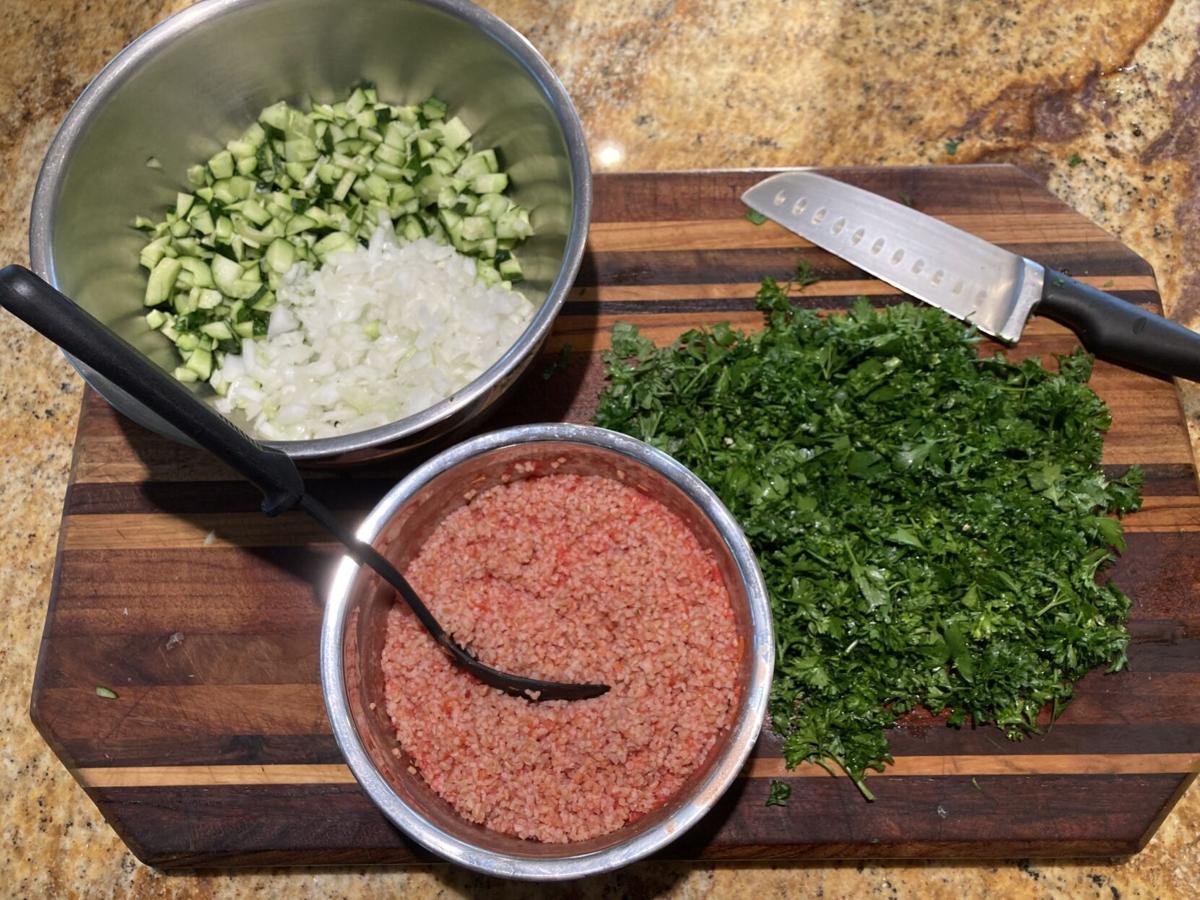 A bowl of tomato tabbouleh.

The world has its share of tabbouleh recipes. The bulgur and parsley salad from the Lebanese hill country has made the rounds, finding homes in many cultures, with countless regional variations. And I can improve all of them, as if by magic wand, thanks to a trick I learned from a farmer in Montana. Thousands of years of culinary evolution is no match for a farmer with a blender, and the creativity to but it to use.

The tabbouleh innovation comes from the heart of tomato season, when the boxes are stacked high for market, and there is usually a pile of extra soft fruit that, by virtue of being absolutely perfectly unconditionally ripe, won’t be transportable to market the next day. Or they could be days-old tomatoes brought home unsold. Leave it to my crafty culinary farmer friends to find ways of turning mountains of near overripe product into the best dish you’ve ever tried. We are talking tomatoes that slice like water balloons, too juicy for salad. Or anything else except juice or soup. Or the best tabbouleh on Earth.

The trick is to use extra-ripe tomatoes to rehydrate the bulgur. If you aren’t exactly sure what bulgur is, think wheat that has not been ground into flour. For many, this is not an easy concept to comprehend. After all, if you take away wheat flour you basically pull the rug out from under American cuisine. The bread, pizza, pasta, tortillas, cookies, pancakes, burger buns and breakfast cereals we fashion from flour make it into practically every meal, from the thick gravy on the biscuit to the breading on the fish and chips. While flour is everywhere, we rarely eat the seed itself. Anyone who’s tried will probably agree the options are limited. You can cook wheat the way you would rice, but it just doesn’t eat as well. It’s crunchy even when overcooked, and won’t stick together or hold sauce.

The problem with flour was that it was impossible to grind without precision equipment, and bulgur, or cracked wheat grains, is an old-world compromise. Smashing and crushing was more manageable to the average old world grain processor. Bulgur cooks quickly into a pleasingly soft state. It holds together, absorbs flavor, and even contributes an understated, earthy taste of its own.

Most tabbouleh recipes call for soaking bulgur in hot water, which is the standard way of rehydrating it. But once you learn the Montana trick, hot water method sounds much too dilute.

Instead, we soak the bulgur in a slurry of tomato, garlic, salt and lime juice.

That’s the tomato trick, but we’d be remiss to not address parsley, the other side of the tabbouleh equation. Cup for cup or pound for pound, there is more parsley in this dish than any other ingredient. It’s not often you find a parsley-based dish, so let’s give the curly, leafy herb its moment of glory. Most often it’s used as nothing more than a garnish, something green and sturdy to look good alongside the food you actually want to eat.

I suppose parsley stays so often on the sidelines because the flavor is so strong, and the texture is that of steel wool. But everyone has a match, an equal and opposite, even parsley. The other ingredients in tabbouleh bring balance, thanks to a mix of strong flavors like garlic, tomato and lime. Chunks of cucumber, meanwhile, bring quiet hydration to the mix, without added water. And the bulgur adds a strong, silent backbone, partly absorbing the parsley’s chlorophyll blast.

Tabbouleh has a lot going for it, and there are lots f reasons to love it. If you have a preferred recipe, try the tomato juice trick, and see how it turns out. And if you’re new here, without a recipe of your own, I like to think that my Montana-style Tomato Tabbouleh, below, is a good place to start.

If you remember one thing about this recipe, hopefully it’s the tomato juice trick.

Trim the tomatoes of any core or rotten spots, and place them in the blender, along with the salt, minced garlic and lime juice. Blend into a slurry. Pour it into a gallon or larger bowl, and stir in the bulgur. When completely mixed, set aside on the counter, covered, for 2-3 hours.

Fluff and test the red bulgur. It will taste exceptional. Add the chopped cucumber, parsley, mint and oil, and stir until the tabbouleh totally mixed. Serve with a garnish that isn’t parsley.