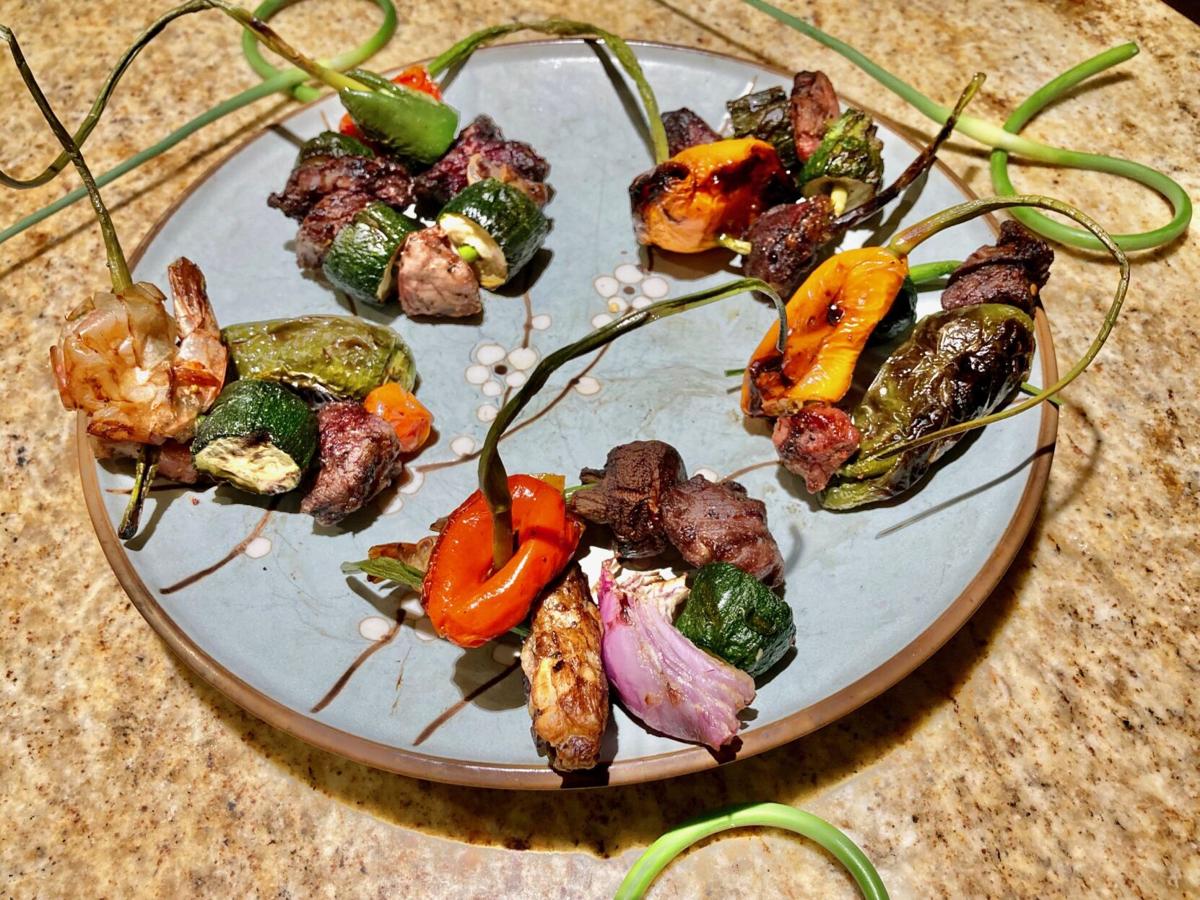 Scape kebabs with shrimp and steak. 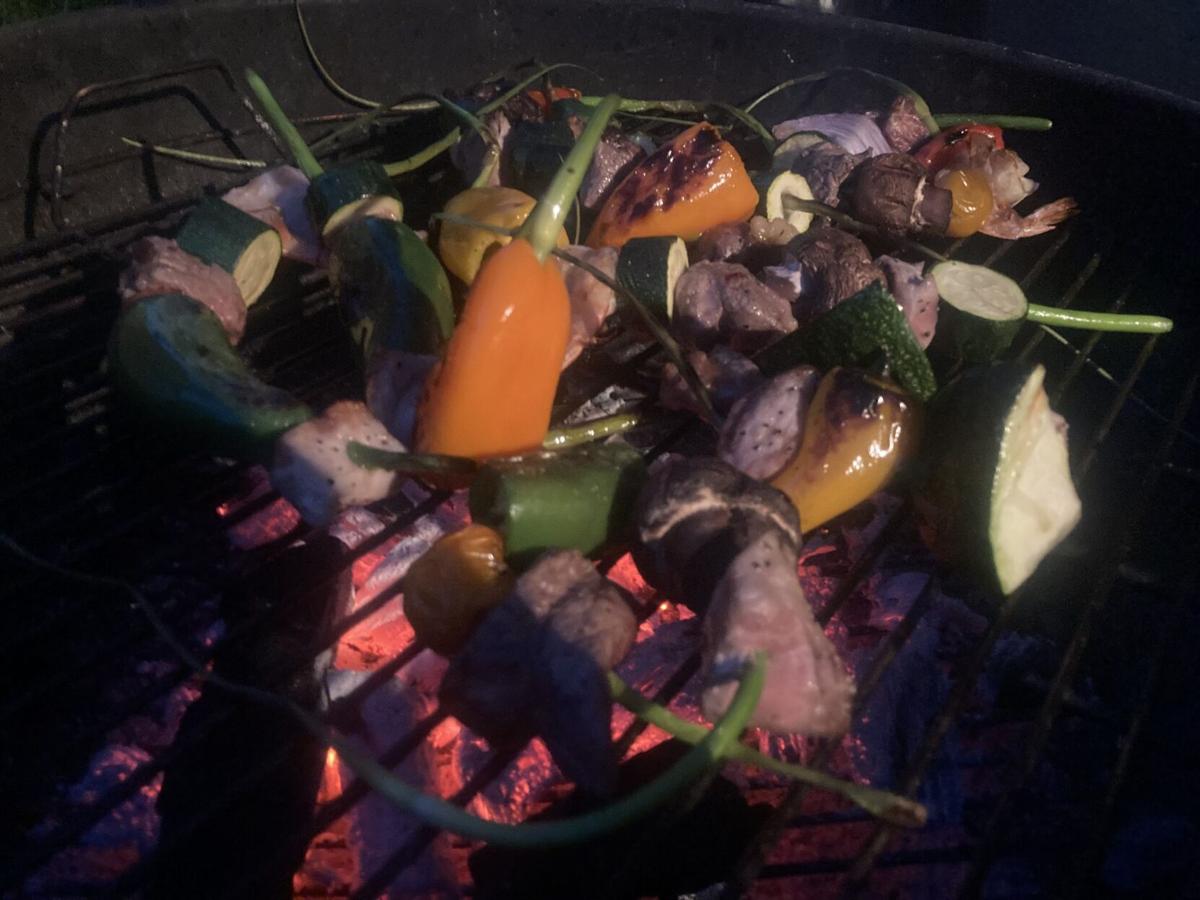 Scape kebabs are a nice mix on a classic, using a root instead of a stick. 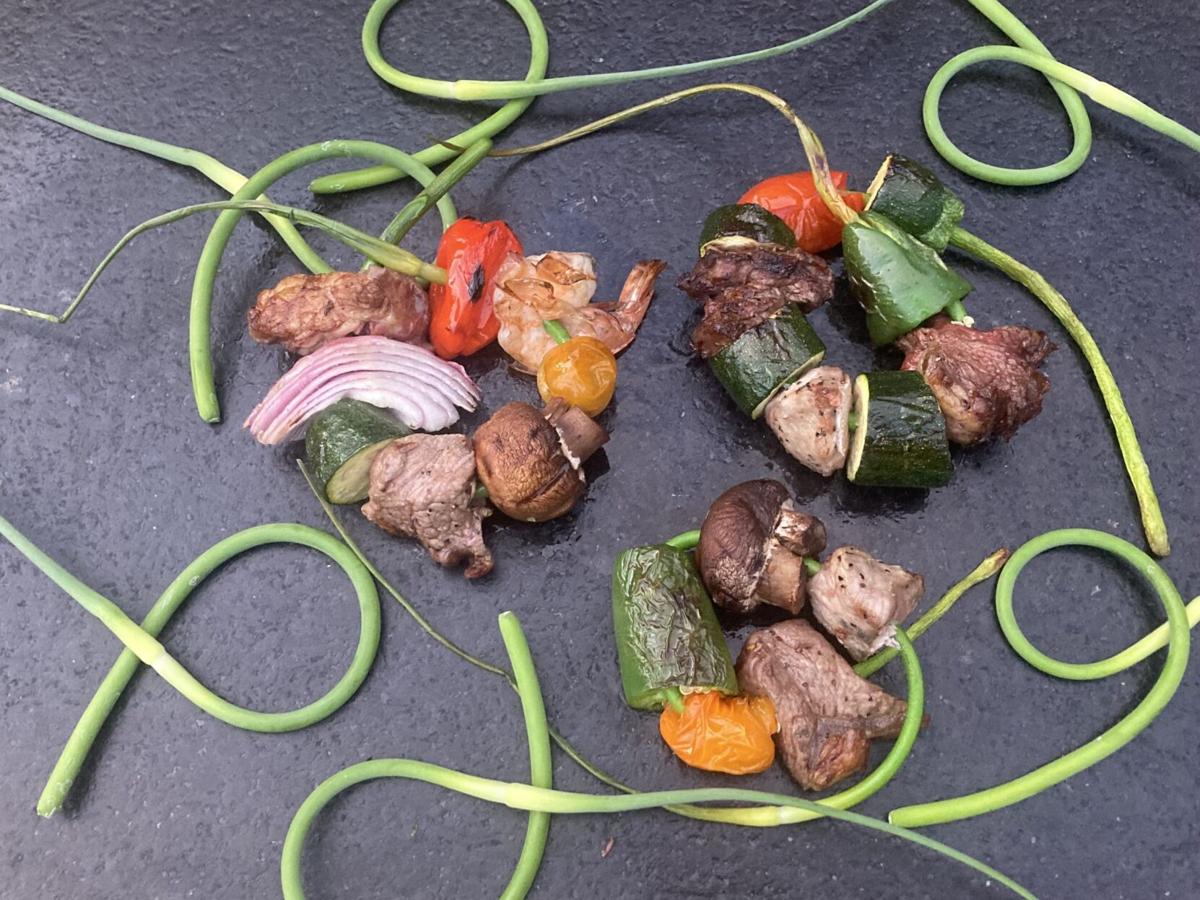 Scape kebabs can be arranged in a circular fashion.

Scape kebabs with shrimp and steak.

Scape kebabs are a nice mix on a classic, using a root instead of a stick.

Scape kebabs can be arranged in a circular fashion.

Across the Northern Hemisphere at about this time, garlic plants are reaching for the sun. Each clove planted last fall has divided and swollen into a bulb of cloves, while the flowers emerge in a circuitous path. Each flower sits on a stalk that, before it will stand up straight like a stalk is supposed to, spends a few days curling around like Cupid’s hair, before finally reversing course and uncurling, at which point the stalk straightens and the flower opens in a firework-like bloom.

Or at least, that’s what would happen if the garlic growers were to let it. But any serious grower will pick this flowering stalk, known as a scape, long before it uncurls. Otherwise the plant will focus too much energy on flowering and not enough on bulbing. This intervention is just like when a cattle grower removes the little boy flowers from the bull cows, and turns them into steers, which grow massive, delicious bodies. For garlic growers, picking the scapes is a chore, something you must do if you want the big bulbs. But it’s also kind of a celebration. You are harvesting the first garlic of the season, in the form of these whimsical looking plant sex organs. Garlic juice runs down your hands as you hold a clump that grows as you walk among your garlic plants.

Between the curves and curls and organs and whatnot it’s hard to not be flowery when writing about garlic flowers. And to a farmer who has run out of garlic from last year’s harvest, those scapes are a lifeline of garlic to cook and eat while you wait for the new crop.

Most growers don’t wait for the scapes to curl around twice, because that’s just too much time for the plant to lose focus on bulb growing. Another matter of debate, and ultimately personal preference, is how to harvest the scapes. Do you snap them off with a flick of the wrist, slice them like a rose, or grip the stalk as soon as it emerges from the plant and pull straight up, gently, until it snaps and slides out.

“We pull them,” says my friend Cua Grogan, a vegetable farmer of Southeast Asian descent. “We think if you can get it to snap deep down in the plant, the bulb will get the biggest.” It was the end of market and she was probably exhausted, but perked up talking scapes. I’m a puller too, I confided to Cua. I don’t know if you get bigger bulbs by pulling, but you get a lot more scape by pulling, including the tender part from deep in the plant, like the end of a perfectly plucked blade of grass.

When I got to Cua’s stand, I had been walking around the farmers market asking growers what to do with scapes. But all I got was the typical advice to stir-fry, grill or make pesto. Thankfully, Cua had some better ideas.

She likes to use scapes as kebab skewers for grilled meat and veggies, and she makes a chopped relish-ish sauce of garlic flowers and fresh herbs that she calls “pepper.”

Since that conversation, I’ve made several rounds of scape skewers on the grill. It’s like making anything else on a skewer, except in this case you chew the skewer, which has the flavor of grilled garlic, and tastes delicious with the meat or pepper or whatever else happened to be on the skewer. The only special advice I can offer is to skewer stuff that will cook at the same rate as whatever else is on the same scape. And before you skewer the item, ream it out with a chopstick to make a scape-sized hole, and push it through. Then it’s like stringing beads on a green garlic necklace.

This relish is meant to be eaten fresh, or a few days old. Put it on everything, or straight in your mouth.

1 tablespoon hot chile flakes (plus or minus, depending on your heat tolerance)

Assess the scapes and determine how woody they are at the bases, as there is a broad spectrum of possibility. If they are too woody at the ends, snap them like asparagus spears — they will naturally break along the line between woody and soft.

Hold the scapes in a small bunch with the curls superimposed and ends lined up, and slice coins of the ends as thinly as possible. When you have a cup, mince the other herbs and mix everything together. If you wish, carefully use a blender to lightly chop it further, but don’t homogenize it. You want it chunky like pico de gallo. Taste and adjust the seasonings as necessary.

Ari Levaux write a weekly recipe column called Flash in the Pan. It runs in about 100 newspapers nationwide.