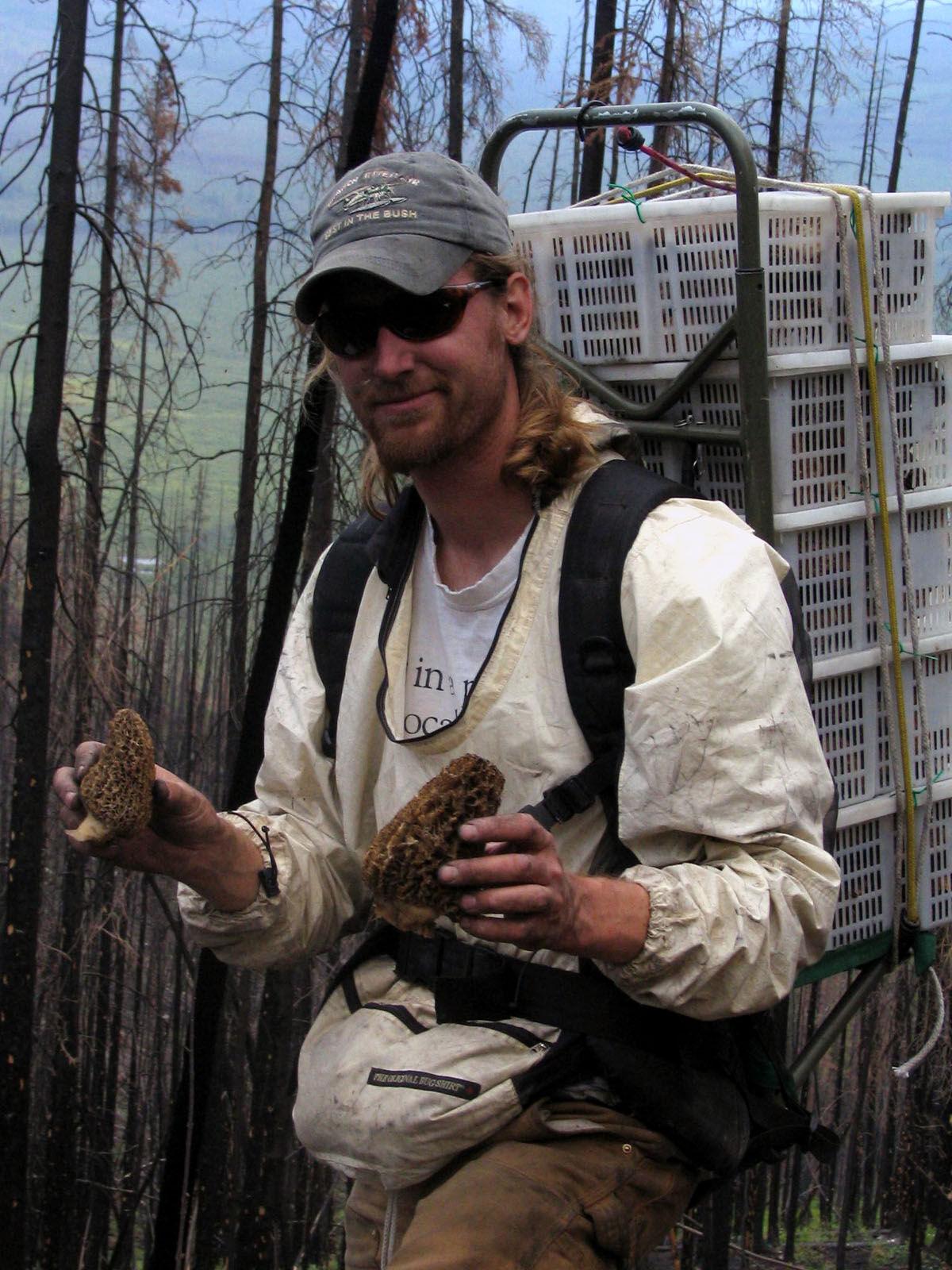 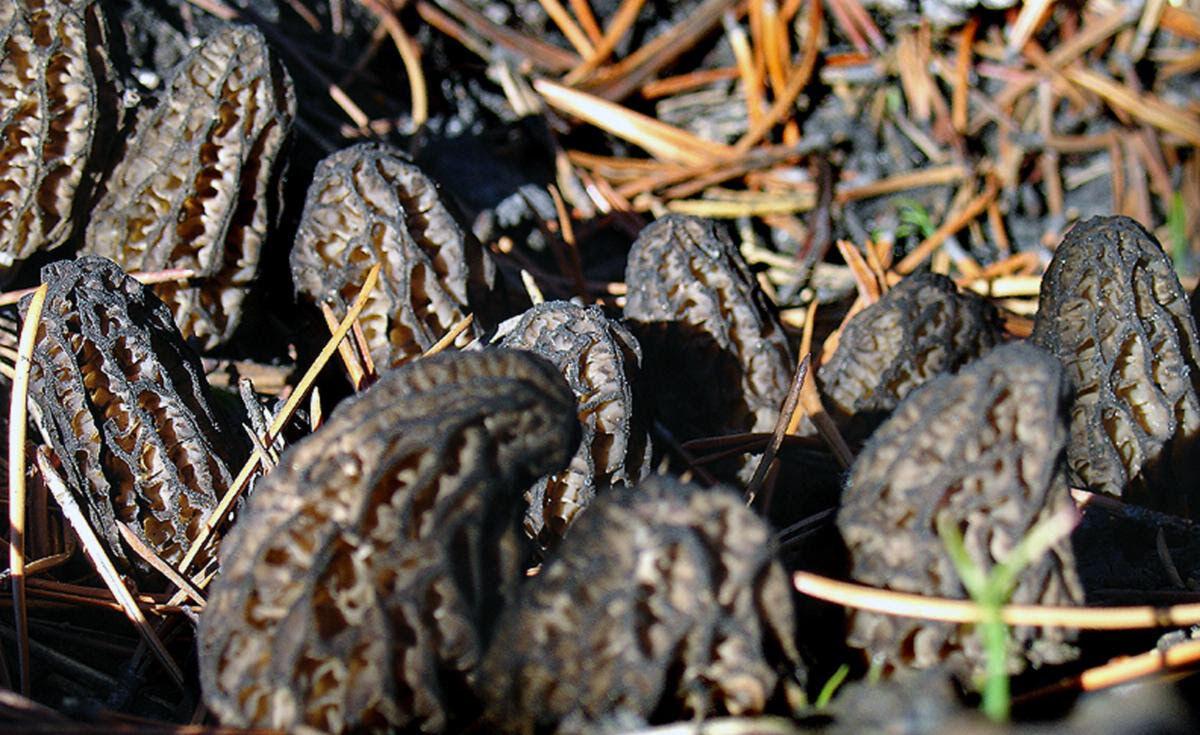 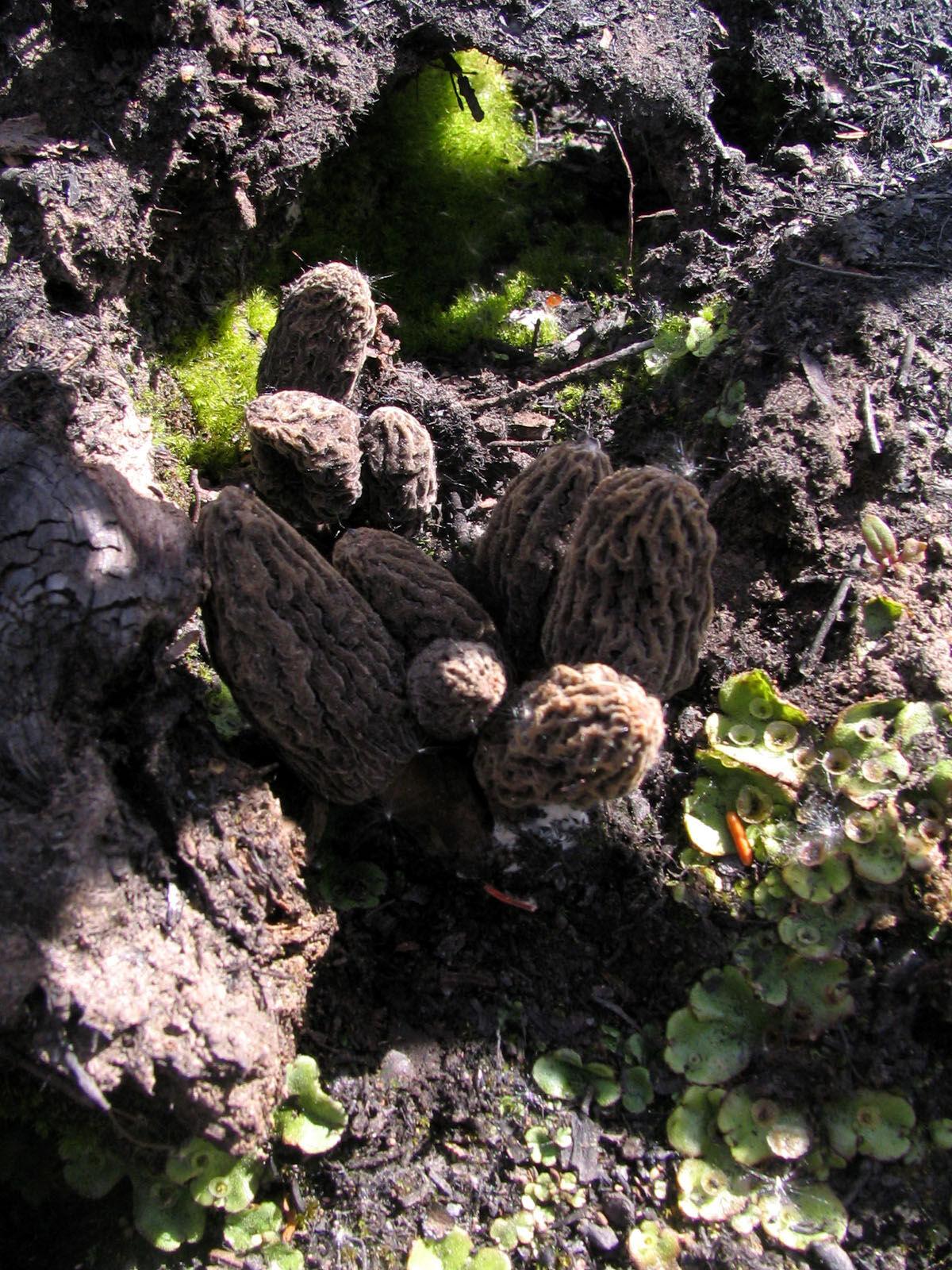 At the farmers markets of the West, it’s common to find morel mushrooms for sale in little baskets. They have a brainy, honeycomb look that beckons with the promise of woodland flavors.

This stubborn species of fungus has refused all efforts at domestication and only grows where it chooses. This means every single morel you’ll ever see was hunted and harvested by hand, in the wild. The vast majority are plucked from the charred ashy landscapes left behind by forest fires. From such rough and tumble upbringings, you can bet those morels have stories.

They are so delicious, so easy to prepare, and so easy to store in perfect condition, that morels are truly the wild mushroom of choice. I’ve gone after those freaky fungal fruits, plodding up and down the burned mountainsides of Montana, Oregon, Washington, British Columbia and Alaska.

Consequently, I’ve got a few morel stories myself. Like the time I got chased by a punky moose, a scrawny juvenile delinquent testing his limits. I turned the tables with some rocks and sticks and sent the bully running. And there was the time I got lost and ran out of water and got so loopy I had to drink from a swamp just so I could think straight, only to follow the sound of my partner Evan honking on the horn of my pickup to guide me back.

Good times, and when you eat the mushrooms collected during those magic, day-long games of hide and seek you relive those sweaty moments, the particles and the memories of the days where all that matters are the tender, earth-toned fruits of a below-ground fungal mycelia.

Nobody is really sure how or why morels appear after a fire. One downside of a wilderness-dependent industry is there doesn’t seem to be much research money available to study it. Most of the knowledge of morel ecology is known to the pickers themselves, who are, suffice it to say, less inclined to share what they know than most scientists.

If you know your way around a campfire you might be able to learn something that might be true at picker camp, spots in the forest where rival harvesters form uneasy communities out of necessity. In these sometimes rowdy places, mushroom buyers set up tables outside of their vehicles and compete for the harvesters and their bounty. The price changes frequently, sometimes hourly. Some buyers are known to be squirrely, while the pickers, who can be cagey, gruff, even hostile, are the ones who will haul you out if they find you in the woods with a broken ankle. When two healthy pickers bump into each other in the field it’s an awkward, mutually disappointed truce.

Back at camp it’s a different story. I’ll never forget the time Lady Jess leapt over a rather large fire when some fool wouldn’t pass the bottle of Yukon Jack. That was a few days before I woke to the sound of gunshots in the 2 a.m. arctic dawn. A mushroom buyer shot up a raft that had capsized and dumped thousands of dollars worth of fresh fungus into the West Fork of Fortymile Creek. At least he blamed the raft and not the poor, shivering Filipino kid who was riding the ill-fated craft.

That season, 2016, took place on 6 million acres of forest that had burned the year before between Tok and Chicken, Alaska, and the pickers swarmed in from all points south. The Filipino kid, a native Spanish speaker, was part of a crew of Mexican pickers, who were legendary around town for how deep they would go. You’d see their red van parked by the side of the road, with no attempt to pull off into some discreet location because they knew that nobody else would walk as far. Despite losing that literal boat-load of fungus — and to this day I don’t know who took the loss — the red van had some five-figure days.

Me, it turned out I was in it for the mushrooms themselves. Every time I sold them, I felt like I was selling my children. Each of those mushrooms was not only a magical phoenix rising from the ashes, but a mushroom that I had spotted, and felt that thrill of a successful hunt. These fun guys were my friends, and much to the chagrin of Black Dog, the buyer at Camp Happy Mosquito, I quit selling. I turned my Subaru into a mushroom dehydrator and brought home trash bags full of dried morels.

Today, next year’s morel habitat is being created by this year’s fires. And last year’s fires left a bumper crop in certain western states. They might not be for sale in your farmers markets, but you can find them in your local fancy produce section, and you can be sure that they were picked wild from some burned forest.

Those dried morels I brought back from Alaska served me for years and never did lose a step of flavor. Cooking with dried mushrooms is an art I’ll address another time, because now, when the fungus among us is fresh, there’s no need.

Morel picking is a challenging and potentially rewarding endeavor, but when you buy them the reward is guaranteed. And when you support an industry that relies on wilderness, you are supporting wilderness itself. Whether you went to the trouble and adventure of picking the morels yourself, or forked over your hard-earned cash, the expense and adversity will melt away when this recipe shepherds your mouth to a burnt forest, the exact location of which only the morels know. And they’re not telling.

¼-½ cup dry sherryzest and juice of one quarter lemon

A pinch of nutmeg

Salt and pepper to taste

Melt the butter in a heavy bottom pan. Add onion and mushrooms. Cook together until onions are translucent and the morels give up their moisture—about 10 minutes.

Add sherry, and let it cook off. Add nutmeg, lime zest and juice. Stir it around and cook a moment, then add the cream. Cook five more minutes, season with salt and pepper, and serve.