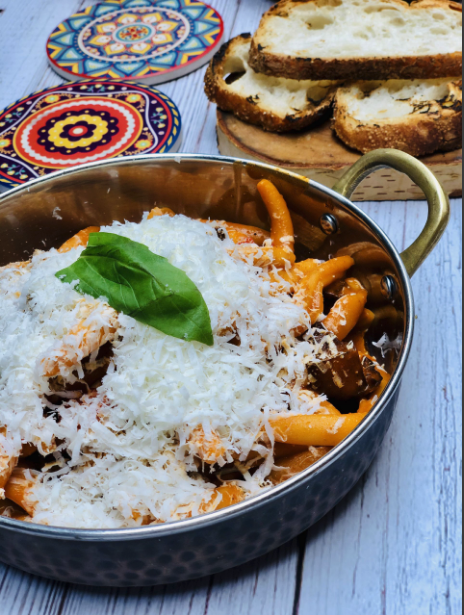 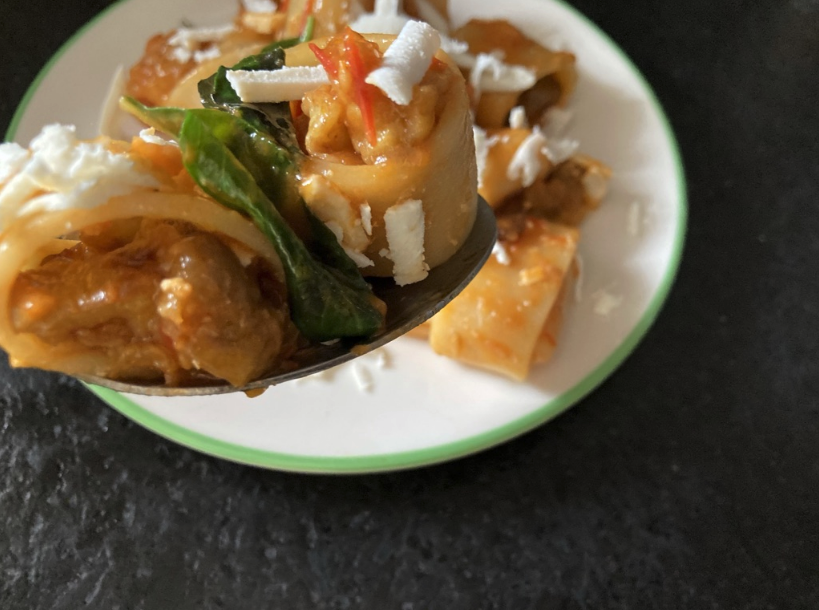 There’s nothing normal about alla Norma, a Sicilian way of serving pasta smothered in an eggplant and tomato sauce. If you enjoy eggplant Parmesan, Ratatouille, Iman Bayildi or any number of eggplant and tomato dishes, you probably understand that eggplant and tomato are a special combination. They are close relatives, taxonomically, sharing not only the same family but the same genus, which means they are as close to being the same species as you can get without being able to make babies.

The family resemblance between eggplant and tomatoes is not obvious. Tomatoes are red, sharp and juicy, while eggplant is meaty, blue in hue and spongy dry inside. The plants that produce them may not be able to interbreed, but the fruits enjoy the mix and mingle that happens in the pan.

Pasta alla Norma is named after an opera by the Sicilian composer Vincenzo Bellini, and christened by the poet Nino Martoglio, also of Sicily, who tried a bite of this dish and declared it to be the “Norma” of pasta, thereby declaring both Sicilian products to be all-time greats in a single triumphant sentence.

Martoglio died 101 years ago, but the tradition of the pasta dish he named lives on. Chef Philip Guardione of the acclaimed Piccola Cucina in Red Lodge Montana, fondly recalls his grandmother’s version of the dish, and the entire day leading up to it. “Pasta alla Norma was our family’s binding agent on Sundays. I have many related childhood memories, like when my grandma was in the kitchen and the smell of her tomato sauce and eggplants would welcome you the minute you opened the front door,” he told me.

Today at Piccola Cucina, Guardione serves the alla Norma sauce with a house made maccheroni pasta that’s long and folded with a hand hewn look. He was generous enough to share, is as brilliant a representation of the glory of tomatoes and eggplants as you’ll find. Up there in the same rarefied air as the eggplant Parmesan sub from Armando’s pizza that composed most of my calories growing up, but on homemade noodles instead of Italian roll. It didn’t hurt that the soprano Bellini chose was named Guiditta Pasta.

I’ve lightly edited Chef Guardione’s recipe for clarity. Below it, I’ve added some notes of my own on pasta in general, and how to follow this recipe.

•2 tablespoons of extra virgin olive oil for the sauté

•Salt for the water, and for seasoning

•Rinse and dry the tomatoes and cut them into pieces. In a large saucepan, pour two tablespoons of extra virgin olive oil and sauté the garlic. Cook for two-to-three minutes.

•Add the tomatoes, stir, and cover with a lid. Cook over low heat until the tomatoes are soft and have released their juices — about 20 minutes. Allow to cool for 15 minutes.

•Transfer the tomatoes to a vegetable mill or blender and puree.

•Pour the tomato sauce back into the saucepan, salt and let simmer for 10-15 minutes until it has thickened.

•Rinse and dry the eggplants, then chop them in ½-inch cubes. Toss the cubes in ½ teaspoon of salt.

•Heat the extra virgin olive oil at about 340F — medium/high-ish, if you’re guessing — fry the eggplant pieces until golden brown, about five minutes. Drain the eggplant.

•In a large pot, bring salted water to a boil. Cook the pasta al dente.

•Plate the pasta and garnish with plenty of ricotta salata cheese

The pasta: If not homemade, it should be 100% semolina. Furthermore, the package should specify that the pasta within had been dried in cold air. I like pieces with nooks and crannies to hold the eggplant chunks.

Immediately after cooking the pasta, toss it in olive oil and freshly pressed or minced garlic (not that crap from a jar). Add these dressed noodles to the sauce. (I do this step to every pasta dish I make.)

When deep-frying the eggplant like this, I was surprised at how little oil it absorbed — less than half a cup!

I added a cup of the pasta water to the sauce to dilute it to the point that my blender had enough to work with. I then cooked off the excess water.