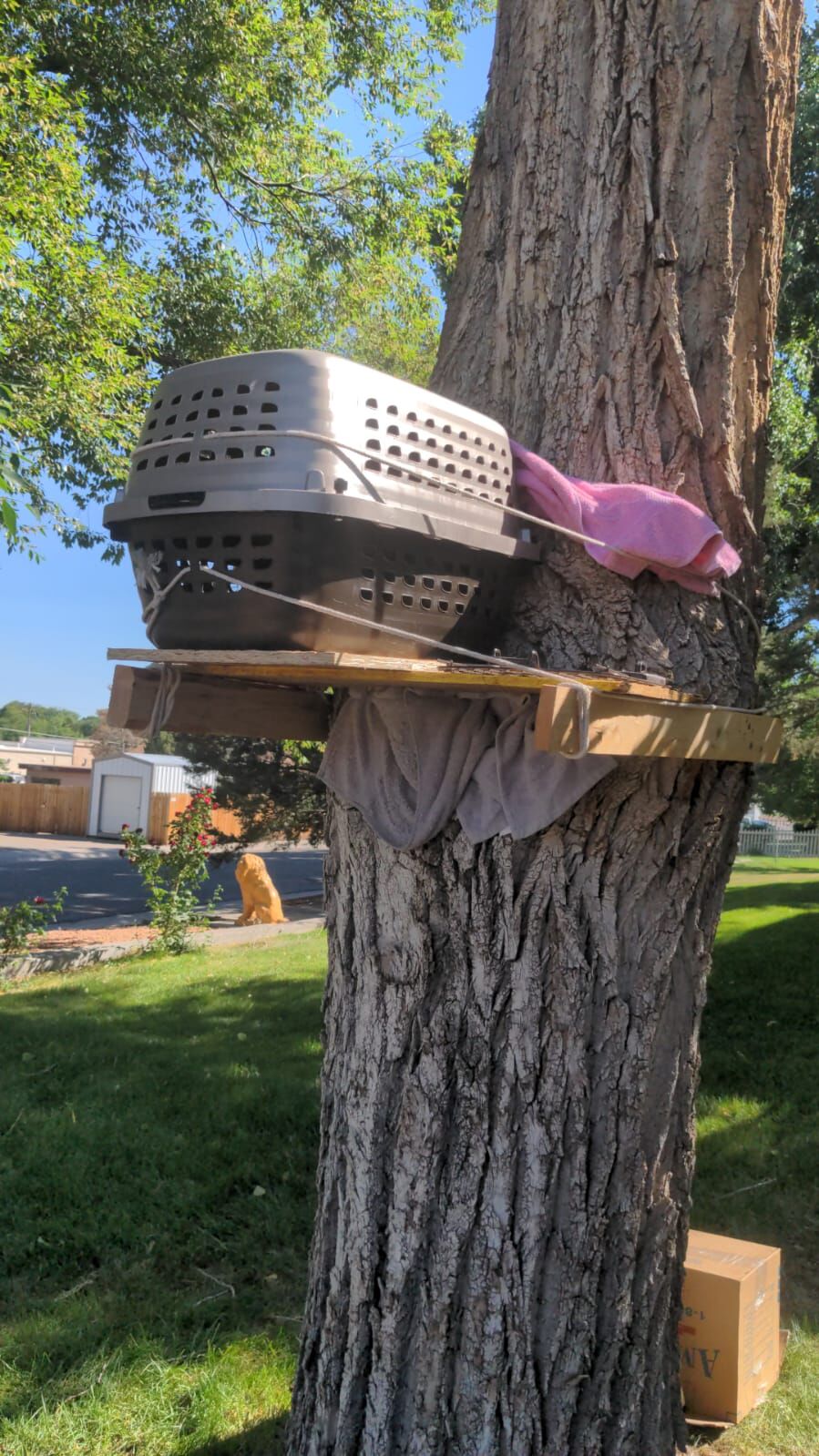 The Sharan's set up a trap for the remaining kittens by setting up a shelf outside the tree hole and placing a carrier with food and water inside. (Photo by Anjali Sharan, Montrose) 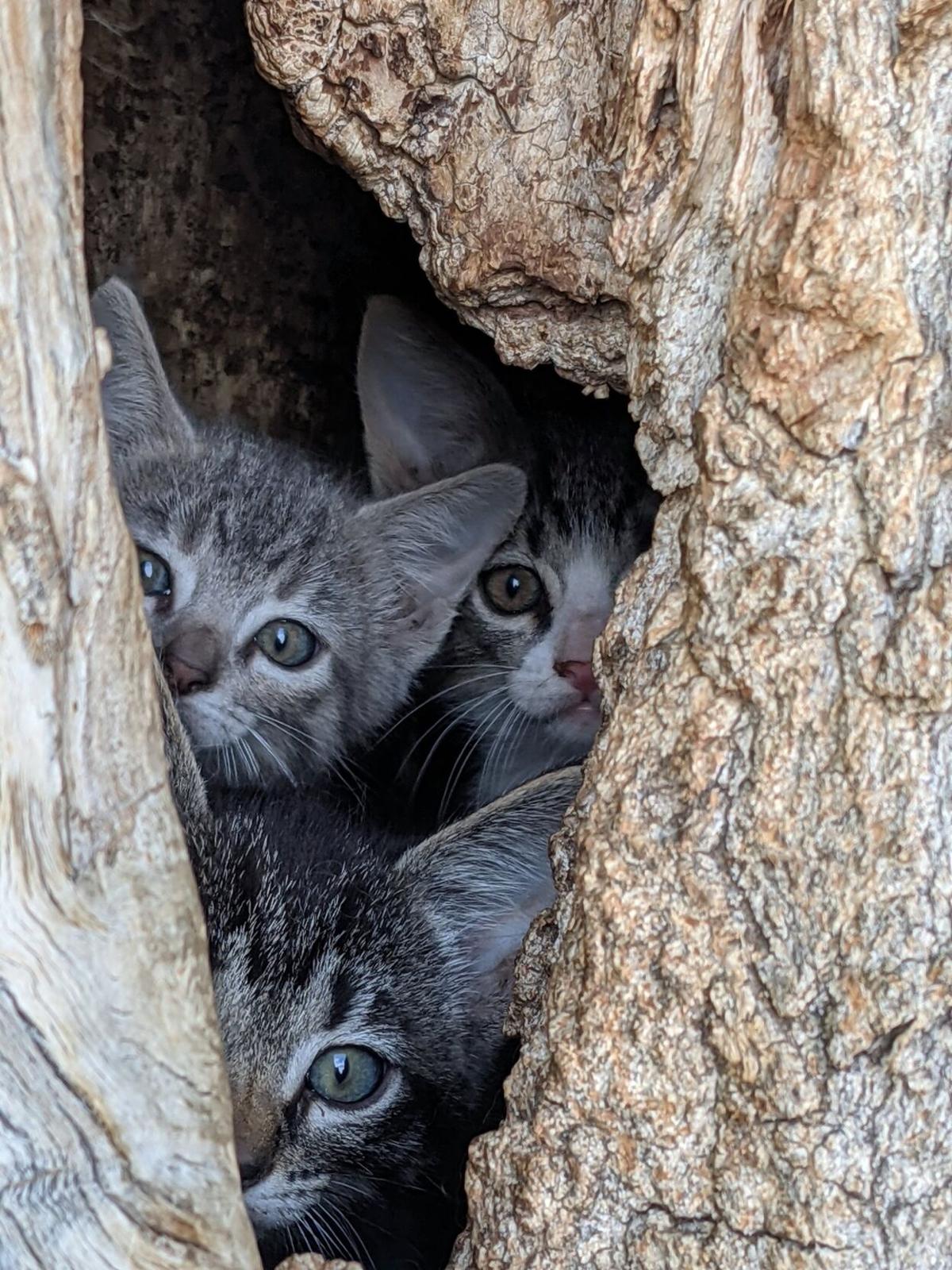 The Sharans discovered two "White Patches," "Gray Face" and "Dark Face" in the Cottonwood tree by their house. Three of the kittens are now known as Boots, Loki and Kuiu, who are now safe with their new families. (Photo by Anjali Sharan, Montrose) 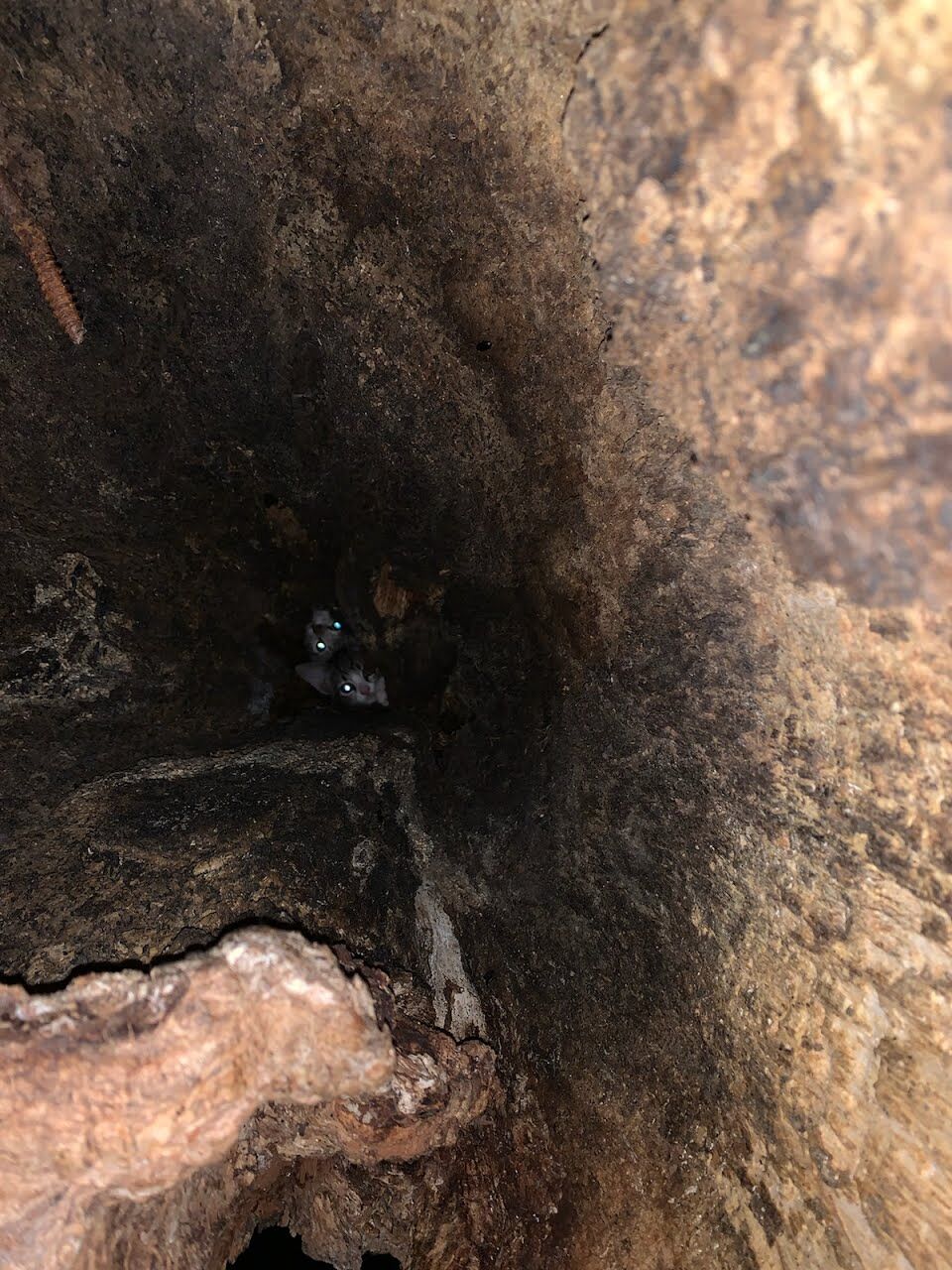 On day 13, the kittens appeared in the tree hole. The initial rescue operation was unsuccessful when both kittens scrambled back up the hollow tree. (Photo by Anjali Sharan, Montrose) 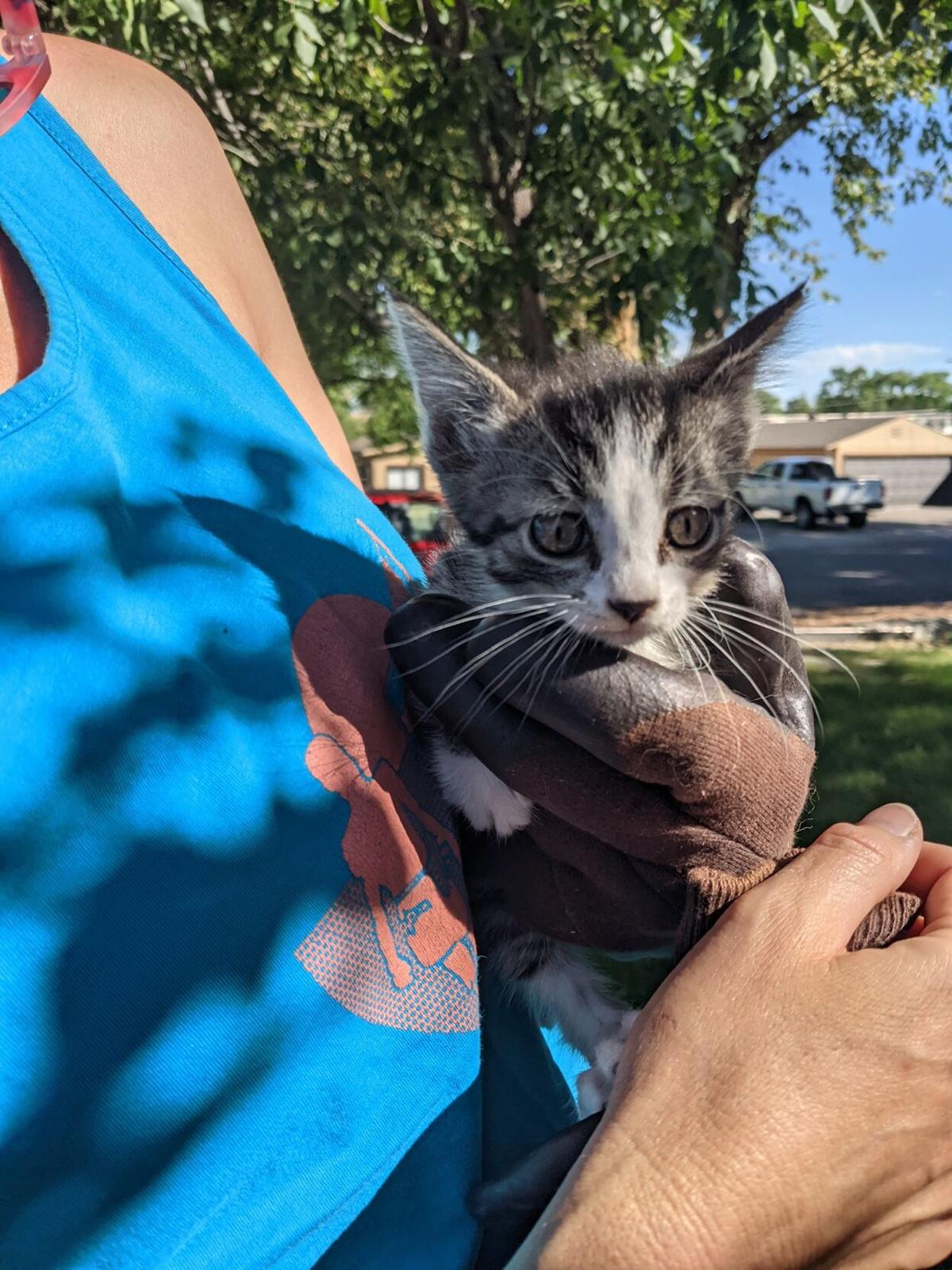 The Sharan's set up a trap for the remaining kittens by setting up a shelf outside the tree hole and placing a carrier with food and water inside. (Photo by Anjali Sharan, Montrose)

The Sharans discovered two "White Patches," "Gray Face" and "Dark Face" in the Cottonwood tree by their house. Three of the kittens are now known as Boots, Loki and Kuiu, who are now safe with their new families. (Photo by Anjali Sharan, Montrose)

On day 13, the kittens appeared in the tree hole. The initial rescue operation was unsuccessful when both kittens scrambled back up the hollow tree. (Photo by Anjali Sharan, Montrose)

The last thing the Sharans expected was to find a litter of kittens in a tree, but what started as caring for the neighborhood stray cat turned into a community rescue mission.

Anjali Sharan was visiting Montrose to see her family and their dog, Shaggy, when the neighborhood cat began showing up.

Anjali’s mother, Daryol Lynn Sharan, noticed the cat walking around the house and planned to help feed it as it made its rounds. That’s when she realized that the cat was a “momma,” becoming more surprised as kittens kept popping up in her yard’s tree.

The Sharans' neighbors had noticed the momma cat hanging around for about a year and had been placing food and water for her, so Daryol decided to do the same before stumbling across the four kittens.

The Cottonwood tree, which as been rooted since the house was first built almost 70 years ago, presented a challenge to the rescuers: it was completely hollow and the kittens could climb as far up or down as they wanted to evade any helping hands.

“We didn’t expect any of it,” said Anjali of the kitten rescue mission. “We didn’t see the story coming whatsoever. My mom saw a cat and was going to start feeding it that was the event.”

Because the Sharans didn’t know much about how to care for kittens, they dove into research and reached out to the community for help.

Anjali relayed the “cat saga” rescue mission on her Facebook account, sharing a photo story series across the span of 22 days.

It was on day seven when Anjali found the first kitten. She had been walking her dog when she noticed the momma cat jump up a tree she often rested under. After some searching, Anjali found the cat staring back at her from a hole in the trunk, initially concluding the mother had found a hiding spot. Upon further inspection, she noticed a “mini-version” of the cat next to her.

The rescuer found the second kitten in the tree trunk hole on Memorial Day and emailed Second Chance Humane Society in Ridgway requesting rescue help, but the shelter responded that they didn’t have the staff to help.

“I called Montrose Animal Shelter and was told they can drop off a live trap and show us how to set it up. We found this “solution” unacceptable as it would separate the mama and kittens,” said Anjali of her rescue progress. Not long after, the Sharans decided to move the cat’s food and water by her tree to see if they could entice the animals out.

Mama cat was tragically hit on day 12, just feet away from the tree that had been giving her and her litter refuge, leaving the rescue team emotional as animal control removed her from the street. The officer was unable to reach the kittens through the hole in the tree, according to Anjali.

“Neighbors were upset and outraged because she was a smart and cautious kitty. There are only four blocks between stop signs in a residential area, so it was inexcusable to be driving too fast to avoid a crossing animal,” Anjali said of the mother’s death.

Daryol made some calls in an effort to rehome the kittens once they were rescued and a family from Olathe was quick to respond.

Once it became apparent that rescuing the orphaned kittens by reaching in was futile, Olathe residents Don Powell and Lance Taramarcaz decided to take a different approach. They used a saw to make the hole larger in an effort to make the rescue easier.

“Gray Face jumped out on the ground and they caught it, so it went to DeeDee [Taramarcaz] and Lance,” Anjali explained, adding that Gray Face is now known as “Loki.”

The Sharans enlisted the help of Climb! Tree Services, but they weren’t able to help with the remaining three kittens due to them being inside the tree instead of “on” the tree, according to Anjali, so self-proclaimed cat lady, Amanda Connelly, a P.E. teacher at Pamona Elementary offered her services. Connelly arrived with a carrier, wet cat food and supplies to help with the mission and managed to rescue “White Patch One, who she took home as a potential foster cat.

With no other options, the rescue team concluded that the tree had to come down.

The team came up with a plan to place a “live trap” in front of the hole, according to Anjali. The Sharan’s neighbor drilled a hole into the tree and installed a shelf where they placed Connelly’s carrier with food and water. It didn’t take long for kittens to eat the food, but it tools a few nights of camping outside while standing watch for the Sharans to be able to catch them in the act long enough to rescue them.

It wasn’t until after Anjali flew back home to Los Angeles that her parents were able to catch “Gray Face,” now known as Kuiu, in the grass by the Cottonwood tree with the help of another neighbor. Kuiu went home safely with the Taramarcaz family.

Finally, “White Patch Two” was left to be rescued and he was proving to be the best at evading capture. The Sharans spent a week attempting to trap the kitten in the carrier while it was eating with a variety of materials, such as a cardboard, a towel and even a baking cookie sheet.

White Patches was too fast for the family, quickly darting back into the tree before the entrance to the carrier could be covered.

“Fortunately, [the] kitty continued to return to the carrier; the only challenge was finding a way to keep him in there long enough to block the hole and shut the carrier door,” Anjali said in her online cat saga story.

On day two, “the last kitten was forcefully checked out of the tree B&B,” Anjali said. The Sharans decided to turn the carrier sideways on the shelf and tied a string to the door so that when White Patch Two, now Boots, went into the carrier to eat, they could close the door quickly to trap him inside.

“Kitty wasn’t particularly happy about the situation, but hopefully it will soon realize it was for the best. As for the hollow tree, it will come down in July and the hole has been boarded up so no new guests attempt to check-in,” Anjali said of the successful rescue mission.

Boots is now a member of the Powell family in Olathe. While the Sharans became in invested in the cat saga, Anjali said her family dog, Shaggy, preferred to stay a single child in the pet household, so there was “never a question” about the family adopting the kittens.

Anjali’s “Cat saga” can be found on her Facebook page at https://bit.ly/3gT8JS1.