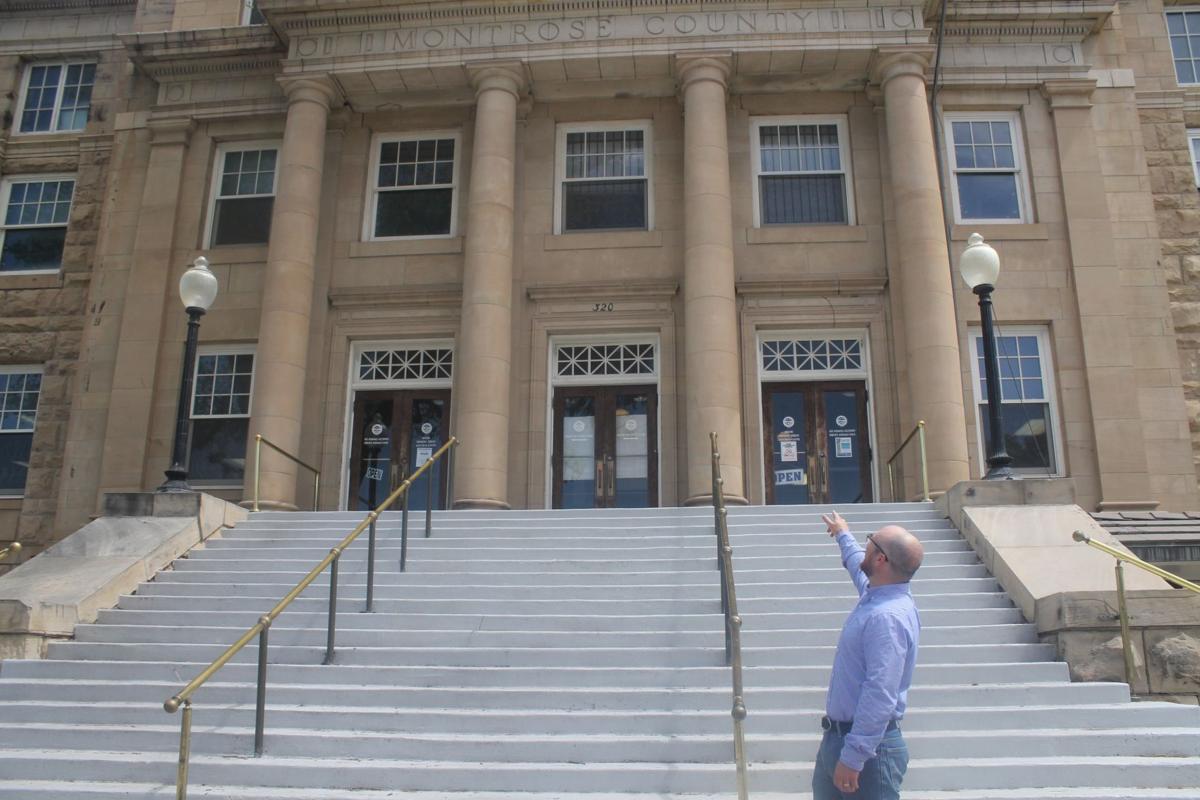 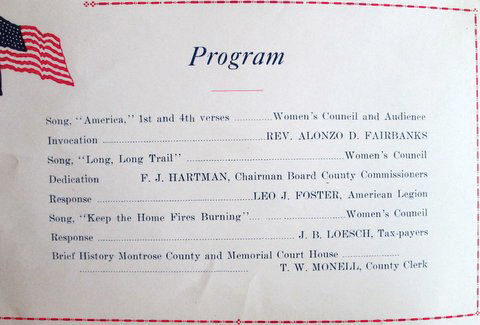 One page of the program dedication. Note familiar names such as Hartman, Loesch and Monell — descendants of these leaders still live in Montrose today, continuing to contribute.

One page of the program dedication. Note familiar names such as Hartman, Loesch and Monell — descendants of these leaders still live in Montrose today, continuing to contribute.

This is exciting news! For many years the fate of this building has been uncertain. It was placed on the National Register of Historic Places on Feb. 18, 1994, due to initial efforts by local citizen Phyllis Alleman and the Montrose County Historical Society. Because of this, it was eligible for and received grants from History Colorado to do some badly needed repairs, but that was a “drop in the bucket,” so to speak.

Constructional issues need to be addressed. This building is extremely vital when it comes to saving our history, yet it needs to be updated in order to be a comfortable, safe place to work.

Following World War I, which left such an impression on the town, especially when many local servicemen did not return, a meeting was called by the town fathers to plan some type of memorial to those fallen heroes. A new courthouse was badly needed, so it was determined in November 1918 that a tax levy would be added to all taxable property in order to erect a new county courthouse.

In June 1922, the contracts were let for construction of the proposed building. It was to be pretty much “homegrown,” using home labor and local products as much as possible.

The stone was mined from the Kaleway Quarry five miles west of Montrose. Blocks weighing from 4,000 to 6,500 pounds each were hauled to the site in wagons, where they were cut to desired size by stone masons. Imagine what a feat that was, not having the equipment that is available today! The humble bench that was used for cutting those large stones is on display at the Montrose County Historical Museum.

The brick was made at the Allen brick plant on Sunset Mesa. Lumber was milled from timber grown in Montrose County, while the sand and gravel came from the bottom of the Uncompahgre River.

Architect, William N. Bowman, remarked that the building was designed to be “as good a building as there is in a county seat—imposing, monumental…”

The cornerstone was laid on Sept. 15, 1922, by the Colorado Masonic Lodge with F. D. Catlin, local attorney, as the Grand Lecturer. A thousand school children from throughout the county took part in a parade preceding the ceremonies.

The cornerstone is of Salida granite, weighing two and one fourth tons! Some of the mementos placed inside the stone are rosters of churches, a history of Olathe, programs and premium lists of the Western Slope Fair, 1922, which was held in Montrose, letterheads and photos of several businesses and law firms, and a copy of the Sept. 12, 1922 Daily Press, a special issue listing pioneers.

Catlin put it well when he said, “All our human relationships lead to the courthouse, the clearing house for all our desires and differences...When you make these journeys to the civic center, bring your children…Let them see the inside of the courthouse and let them become familiar with the proceedings which bring you to its doors…let the children learn about county government.”

The finished courthouse was dedicated to the county and presented to the taxpayers on Dec. 7, 1923. A program of music and speeches was conducted on the front lawn. Apples and cigars were passed out and tours of the building were conducted, followed by refreshments of punch and wafers.

A bronze plaque honoring the 34 veterans and one nurse who lost their lives in the Great World War still hangs in the front entrance of the courthouse, placed their in 1923 by J. L. Atkinson.

A special room for veterans was in the basement of the building as well as “resting rooms,” especially designed for those who lived in the country who needed a place to relax for a while, since a trip to town was an all-day affair. A vault housed the large brand books where every brand in the county was registered.

Grand court rooms were on the upper level, which became the scene of many exciting trials. There was never a jail on the upper floor. In 1929, the County Commissioners, then working out of the new courthouse, asked for bids to make the old jail (the one in the alley behind Ace Hardware) escape proof. The firm of White, Okey and Jones was hired.

That jail was used until 1936 when President Roosevelt’s New Deal made it possible to build a jail next to the courthouse. Sheriff Frank Hovey was the first to occupy the new stone building, which still stands and has been used for various purposes throughout the years.

Another new jail was built on South Second Street, across the alley from the courthouse, in1968, originally designed to accommodate 55 prisoners. The current Justice Center was presented to the county, at a cost of $30,782,088, in December 1998. It serves the judicial needs, houses the sheriff’s offices and the jail.

In 1993 when the downtown courthouse was placed on the National Register, the stone jail building was included in the nomination.

How could the thought of tearing down these valuable buildings ever be entertained? They represent our heritage and are unique to Montrose.