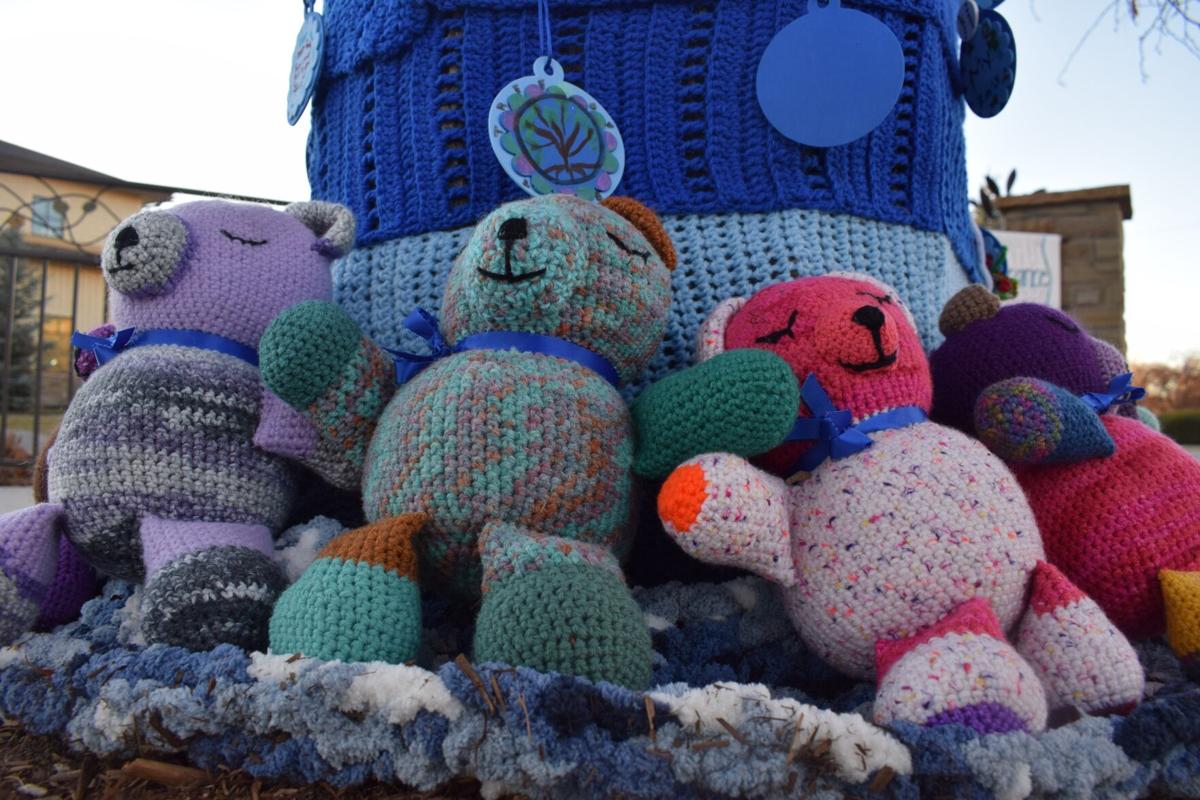 The plush bears, crafted by Eva Preslan, serve as transitional objects for the children. 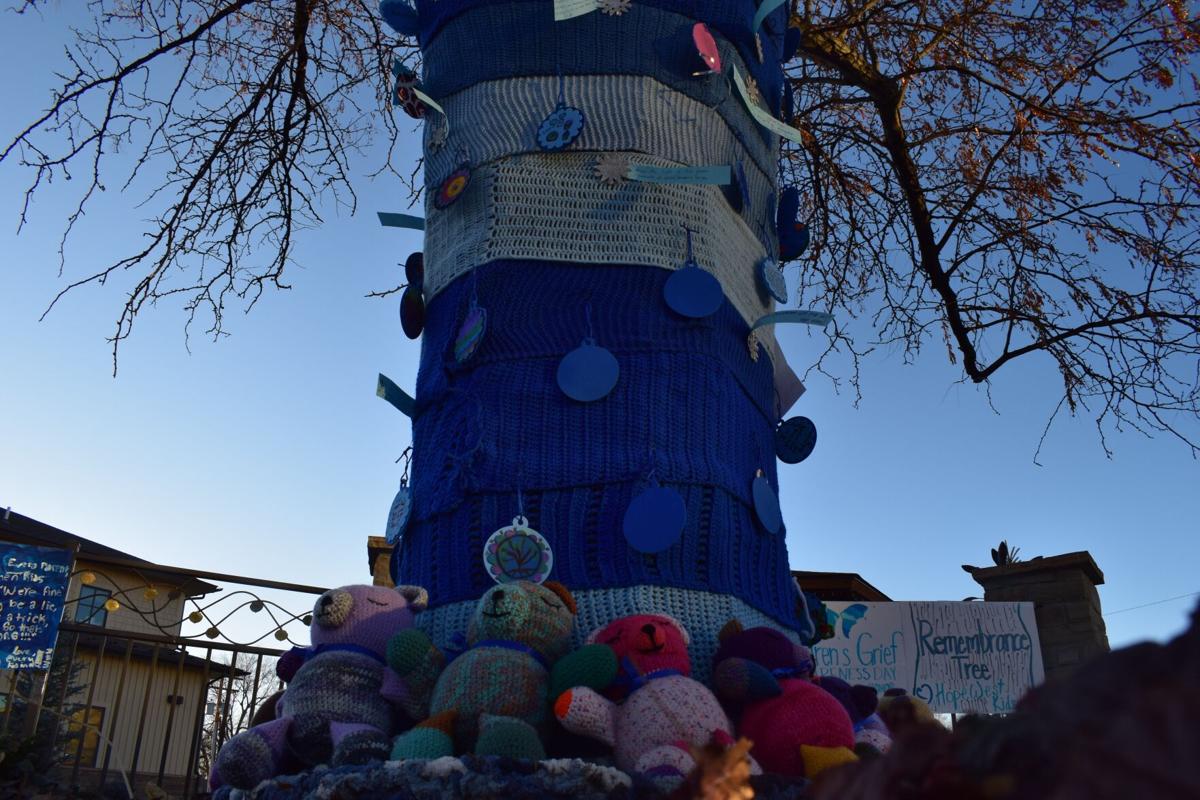 The Remembrance Tree, located on the corner of Nevada and S. 4th St., was decorated with ornaments, messages and plush bears to commemorate Children's Grief Awareness Day on Thursday. 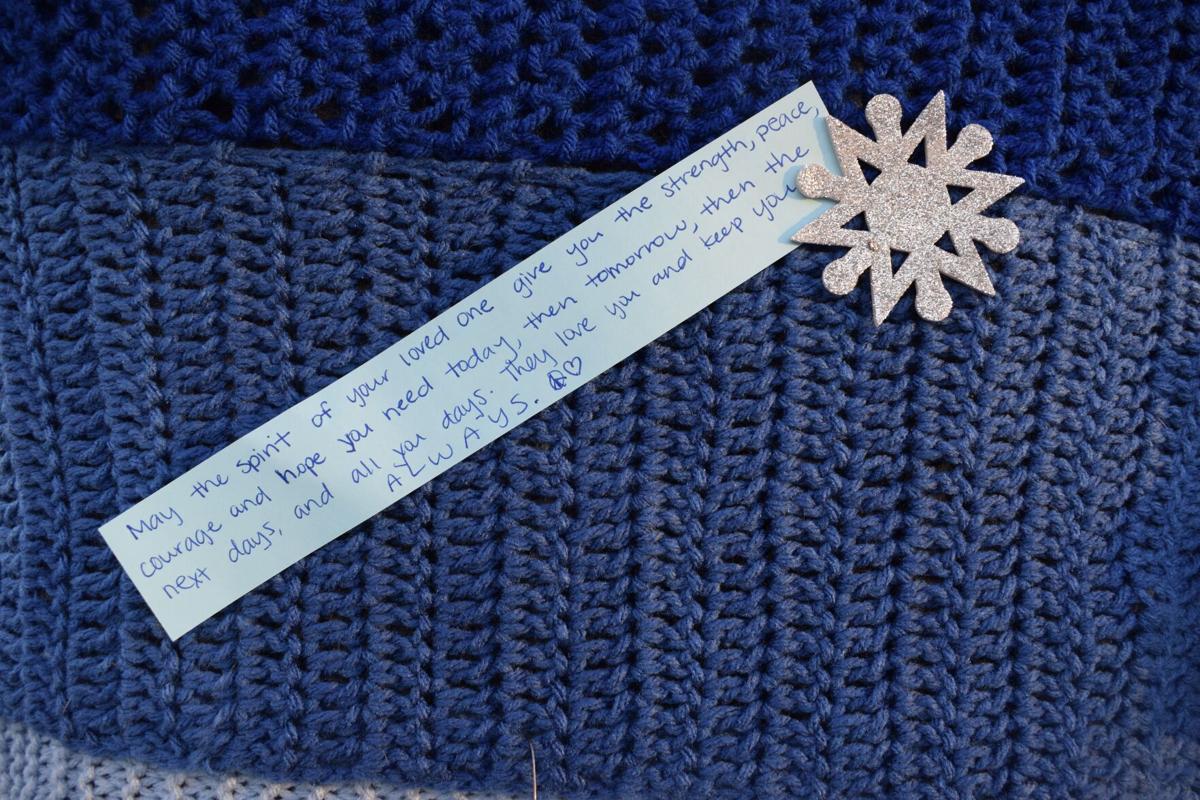 A message from an adult that was placed on the Remembrance Tree on Thursday. 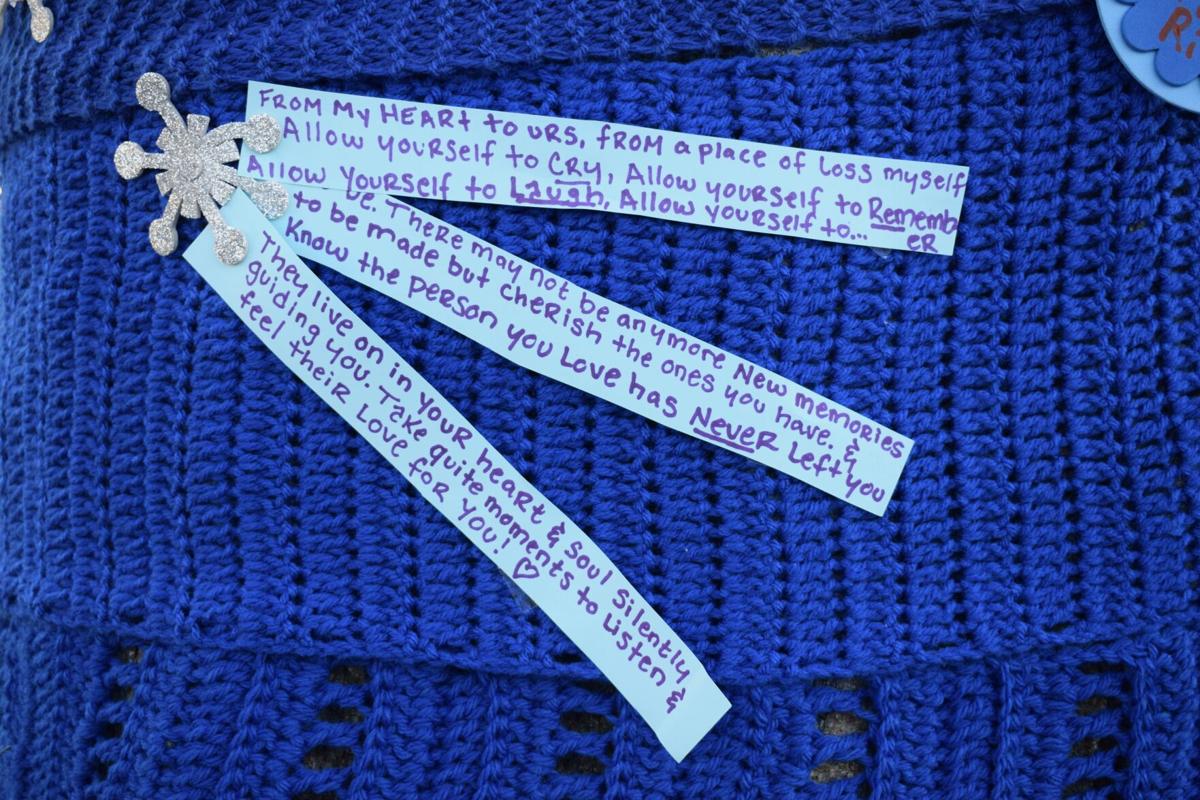 A written message from an adult that was placed on the Remembrance Tree. 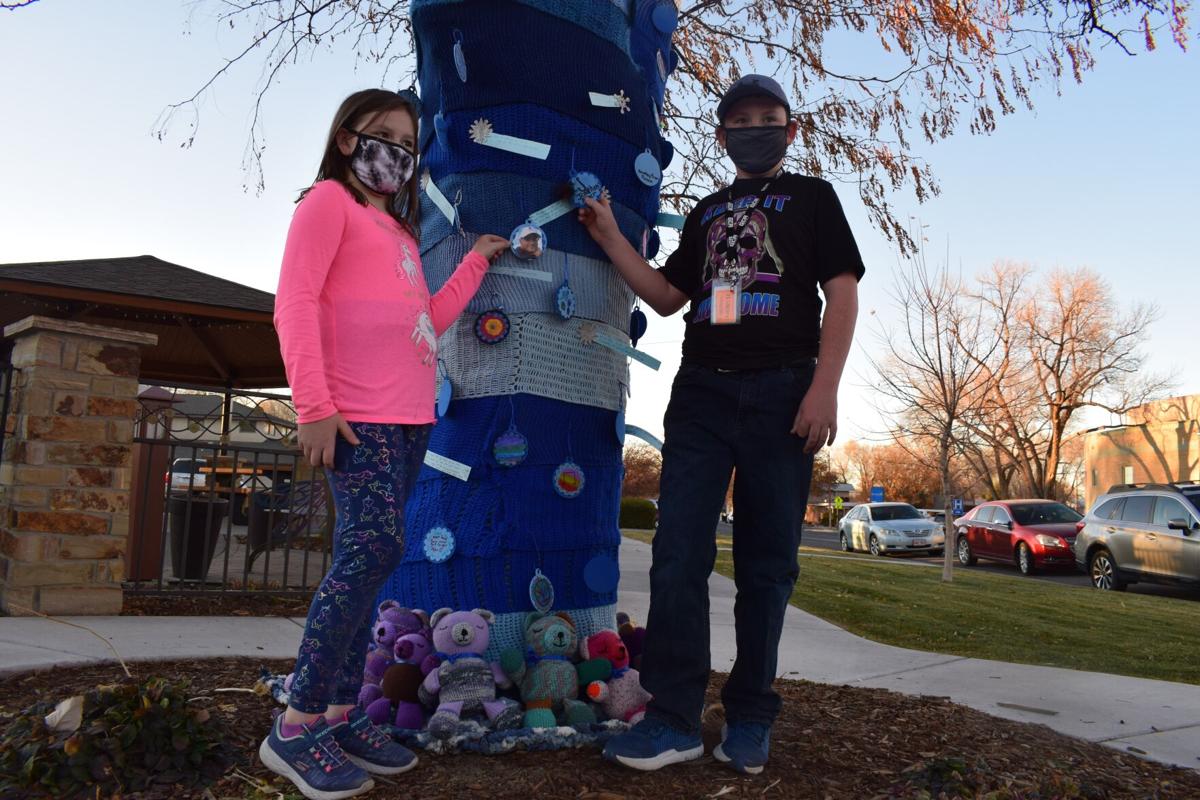 Siblings stopped by the Remembrance Tree on Thursday. 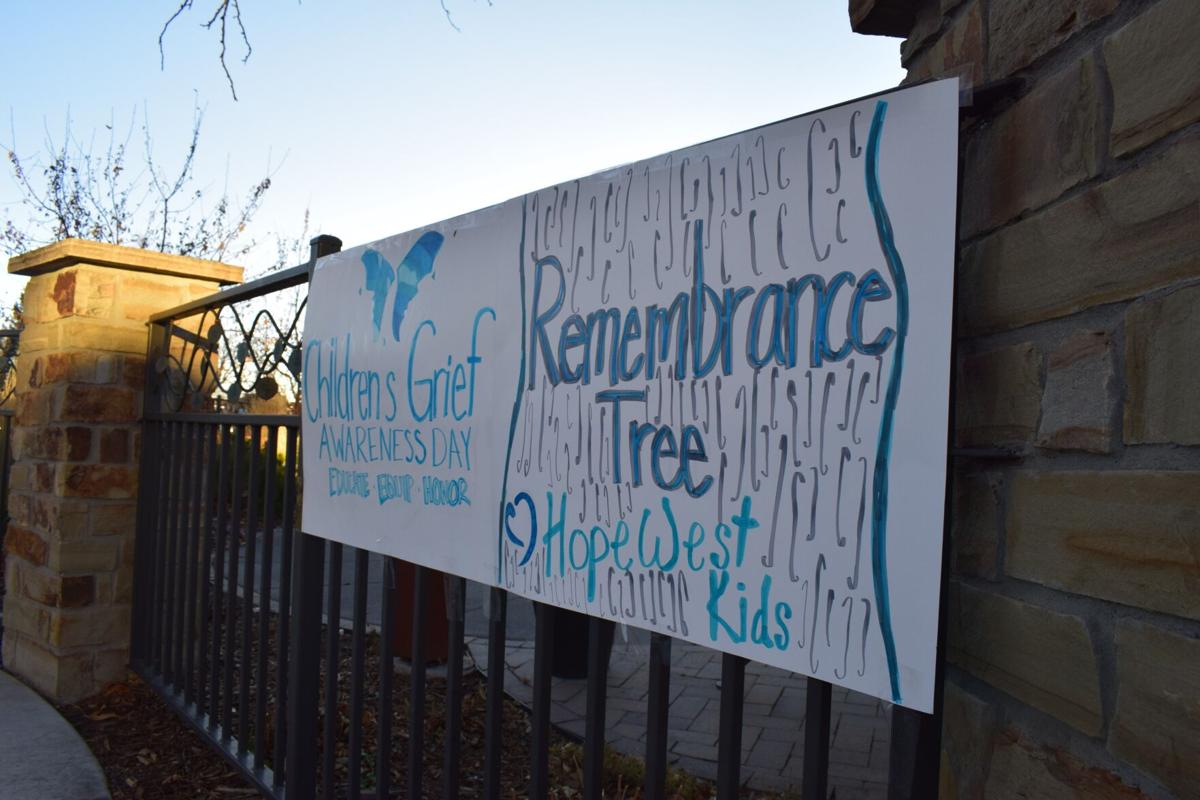 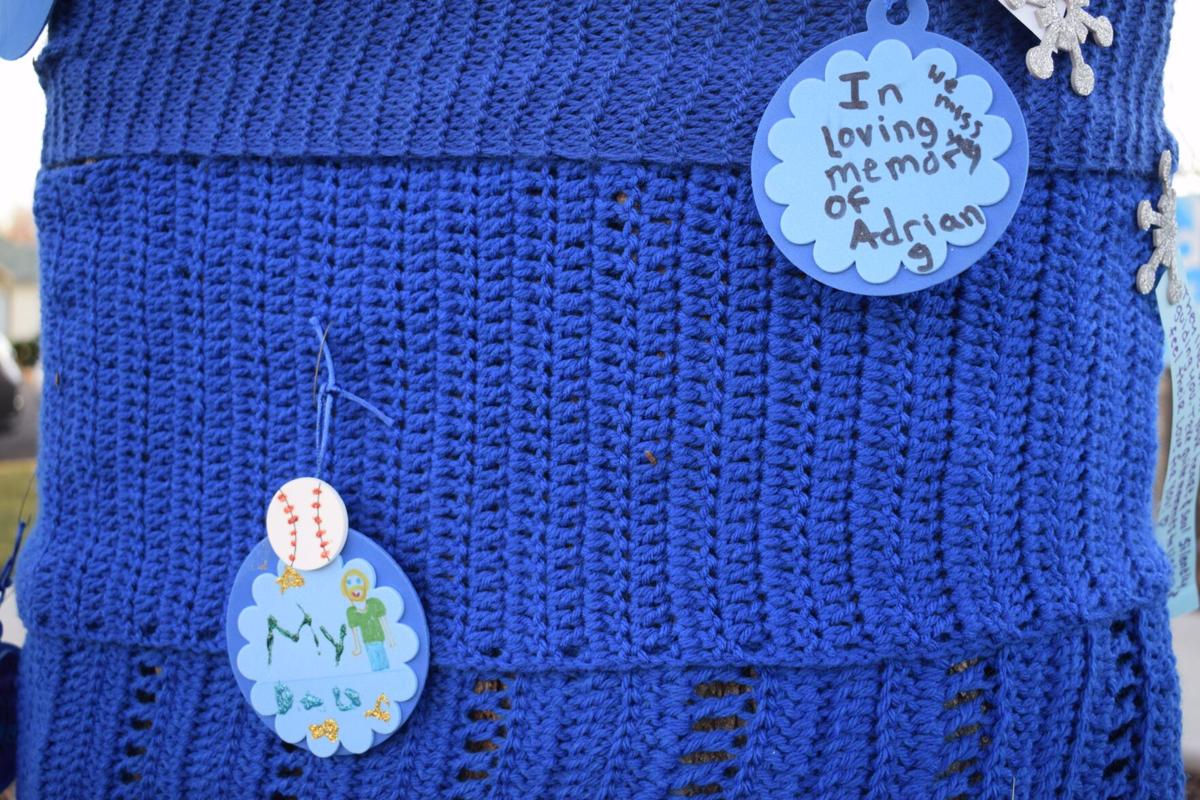 Ornaments that hung on the Remembrance Tree on Thursday.

The plush bears, crafted by Eva Preslan, serve as transitional objects for the children.

The Remembrance Tree, located on the corner of Nevada and S. 4th St., was decorated with ornaments, messages and plush bears to commemorate Children's Grief Awareness Day on Thursday.

A message from an adult that was placed on the Remembrance Tree on Thursday.

A written message from an adult that was placed on the Remembrance Tree.

Siblings stopped by the Remembrance Tree on Thursday.

Ornaments that hung on the Remembrance Tree on Thursday.

A mother and her two children stopped by the corner of Nevada and S. 4th St. on Thursday, eager to pay a visit to the decorated and wrapped-in-blue Remembrance Tree. The children looked for their customized ornaments, dangling among many others.

The tree, adorned with ornaments, message of support and joined by plush bears (a transitional object to help process loss) from Eva Preslan, was crafted by volunteers, children and teens from the community in an event from HopeWest on Children’s Grief Awareness Day.

“It’s a non-verbal modality that allows them to express what they’re feeling without words,” HopeWest Bereavement Coordinator Bethany Floyd said of the tree. “A physical tree not only allows them to act, but it also solidifies that physical memorialization when you have a physical item that you’ve created for your loved one. You’re channeling that love that you want to give that person.”

Adults, too, stopped by the tree and wrote messages of support for the children, messages that will be read back to the children in school groups, including one that read, “You are so brave and strong. Keep moving forward knowing that your loved one lives in you.”

“If we brought the art out and created a remembrance tree in the community, we thought we could bring more attention to children’s loss and that’s why we have the adults write the messages,” Floyd said.

“Compassion to others helps our own personal journey and it also helps the children. Whether they’ve experienced it first hand or not, I think they felt the need to reach out and say we’re here,” she later added.

The event was an effort from HopeWest to raise awareness of children’s loss — nationally, 1 in 5 children will experience the death of someone close to them by the age of 18.

“Kids definitely grieve differently than adults,” Kinkade said. “Depending on the developmental age, where they’re at, most of them can only grieve in small doses.” Children, Kinkade added, shield their feelings at times to lessen additional pain on adults, and often don’t have the words to express their emotions, a culmination that can make grieving children difficult to identify.

The event was the first occasion of HopeWest “yarn bombing” the tree. Children, teens and adults stopped by throughout the day. A group of teens stopped by to honor a friend who died recently.

It was a new way for the organization to offer an outlet for the community. Last year, HopeWest served more than 190 children in school grief groups, though Kinkade expects the total could be higher as there are children who don’t actively seek help. This year, the organization has served around 120, less due to smaller groups formed in response to the pandemic.

And over 50% of the kids HopeWest serves have lost a parent, she said, in addition to helping children who have lost someone to suicide. Teen deaths also have significantly impacted the teen population in the community.

“The deaths are traumatic as well for a lot of the kids that we see,” Kinkade said, “... we’ve had a lot of teen deaths that have really impacted our teenagers and teachers at the school.”

HopeWest, in addition to teens and adults, also serves adults. But the grieving process, for all ages, has been “exacerbated” during the pandemic, Floyd said. Grieving independently is an important part of the process, but that comes with daily functions, attending events, socializing in groups, all used as normal coping skills.

Those mechanisms haven’t entirely been available the past several months.

“It’s exacerbated our symptoms because as we go out into the world, we’re no longer bringing our own individual grief, but we have societal grief,” Floyd said. “We have this community, this space, this world that’s grieving the loss on a larger scale, so it’s really impacted.”

To combat the limited access, HopeWest has pivoted to small groups and events, along with virtual sessions in efforts to continue providing support. Children, Kinkade said, have been “much more anxious” during this time.

Despite the scale down, engagement remains strong.

“I’m seeing more engagement in group,” Floyd said. “More of that open connection… bonding closer with those in group, so they’re finding a way to connect. Kids are resilient, but that doesn’t mean that they don’t need support.”

HopeWest partners with Montrose County School District as Kinkade connects with school counselors to help grieving teens and children, and the help they receive is something that couldn’t be done without the counselors, Kinkade said.

“When a child or teen is going through grief, lack of concentration is one of the grief symptoms that they experience,” Kinkade said. “So taking that time as a group, and what’s so beneficial is the kids see that they’re not alone. Children can usually think, ‘I’m the only one. I’m different. I’m the only one going through this right now.’ When they’re in that group and they share their losses, they get that connection and support.”

HopeWest has been creative in the ways they help the groups, offering numerous groups/programs and innovative ways to give children and teens a chance to share their feelings — one exercise has children write down their feelings and “place them” in a bottle that’s wrapped. Children can then choose which feelings they are ready to share.

The organization also plans to start Connecting Hearts, a peer support group for children that have family members dealing with a serious illness, and just started a monthly grief support group for individuals, children and families who have experienced a death/loss by suicide.

“We’re constantly trying to look for ways to connect in the community, because not only are we working with families in hospice who are having anticipatory grief, we connect with the Center for Mental Health to let them know what groups we’re providing.”

Floyd and Kinkade, as they welcomed people of all ages to the tree on Thursday, said the experiences working with the groups has been “impactful.”

“It’s always impactful when you’re sitting in a room with another individual, and they can be raw and as vulnerable as they need to be for themselves,” Floyd said.

HopeWest hosts an open studio the first and third Wednesday of every month at 725 S. 4th St. from 3 — 5 p.m. Register by calling 970-240-7734 or emailing bfloyd@hopewestco.org. HopeWest has offices in Montrose, Grand Junction, Delta, Meeker and the Plateau Valley. For more information, visit hopewestco.org.