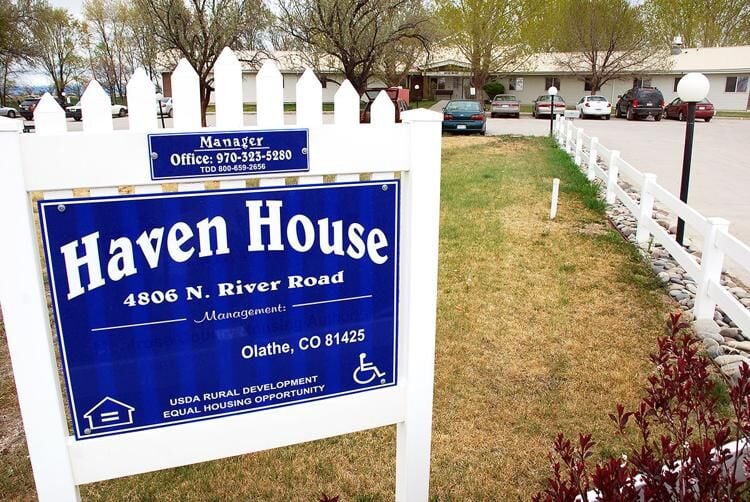 A decade ago, Carolyn Carter, and Larry and Lillian Fredericksen acted on her dream of establishing transitional housing for families experiencing homelessness. Ten years on, homelessness remains — but so too, does Haven House Transitional Living Center, one of many nonprofits attempting to bridge the gap.

The center, located in a former farmworkers’ dorm in Olathe, works to tailor support programs to its families so they can transition from homelessness to self-sufficiency.

Since its beginnings, Haven House has purchased the facility it once leased — and once stood to lose — has expanded support programs for its residents; recently won certification for a new early childhood program and is hopeful to next year break ground on additional facilities intended to include low-income apartments for families who “graduate” Haven House.

Larry Fredericksen said he’d never expected Haven House to grow the way it has. “We thought the transitional program would be the end of the line and the 13,000 square feet we had would be more than we would ever need. The need is still there. It hasn’t gone away,” he added.

“It’s all driven by God. We see it happening all the time, where things would not have happened the way they have without Him.”

There’s also the not-so-small matter of weathering the COVID-19 pandemic. Although the center had to effectively go into lockdown last year, and its volunteer pool tapered off because of risk-reducing restrictions, Haven House recently fully reopened to volunteers, visitors and tours.

“We escaped COVID without an infection, except for one of our staff,” Fredericksen said, explaining the staffer had been exposed to the virus by one of her family members, and not from anyone at Haven House.

“We’re grateful we managed to get through it and everyone (adults) is vaccinated.”

Having to lock down Haven House affected families psychologically, but also in terms of school and work.

“This last year during COVID, the kids did very poorly in the remote learning from March to June with shutdowns. We realized we had to provide far more hands of support for the children,” Fredericksen said.

Staff worked with kids over the summer, providing additional tutoring to help them catch up.

But, when schools did reopen, administration realized it was conditional — schools could be shut down for outbreaks and outbreaks in the schools increased the risk of kids transmitting the virus once they came home to Haven House.

“We’re hopeful that, especially with all the adults being vaccinated, we’ll be able to send kids back (to school) in the fall,” said Fredericksen.

The remote learning program also allowed parents of the students to keep working or job-searching without having to worry about child care if a school or classroom shut down, he said.

Although things were tough for a time, the community stood by Haven House and its funding has grown a bit, in part due to COVID-specific payments. Last October, when a fire burned the nonprofit’s off-site storage facility — the flames taking household goods, early childhood program supplies, and Christmas gifts with them — several in the community stepped up with fundraisers and donation drives.

The City of Montrose and Montrose County have also been supportive of Haven House and Fredericksen said he hopes that will continue, because some grant funding eligibility has changed to preclude transitional housing.

Haven House opened its doors in April 2011. At the time, it leased the dormitory facility from Montrose County Housing Authority. At the time the Montrose Community Foundation was Haven House’s fiscal sponsor.

In 2015, when the building stood to be sold to another party, Haven House raised hundreds of thousands in donations, grants and loans to purchase the facility for itself.

“When we bought the building, God’s fingerprints were all over it,” Lillian Fredericksen said. “Everything wouldn’t have happened without Him and prayers.”

The programs offered through Haven House have also grown over the years, especially ones for kids.

“When we opened the doors in April 2011, we opened it with a focus on families and our programs were geared strictly to help the adults put their lives back together,” Larry Fredericksen said.

After a few years, as resources built up, Haven House started a nine-part child development program for school-aged residents.

“That was a major undertaking. We realized how challenged the kids were and how most of the children coming into Haven House were two or more years behind (academically) and how they were kind of on a trajectory to eventually drop out of school,” Fredericksen said. “When we recognized that, we put together the program. It’s a holistic approach to addressing their issues.”

Other programs include the Whiz Kids tutoring and mentoring that Lillian, inspired by a similar program, implemented, and Holy Listening with Lacy Finn Borgo. Holy Listening entails one-on-one interaction with children, who can discuss joys, sorrows and other issues; those who wish to pray can participate in a prayer session.

“The kids really benefit from her guidance and how she’s able to show the kids how God or Jesus can be a part of dealing with the trauma they brought with them to Haven House,” Larry Fredericksen said.

Haven House is taking its next big step, having established an early childhood center, the Kid’s Haven Early Learning Center, which will provide daycare and enrichment programs. Priority is given to working parents at Haven House, but the hope is to also open up spaces for lower-income community members, as available.

The Kid’s Haven cleared a major hurdle in securing state certification and will celebrate with a grand opening May 13. After, there will be an anniversary party for Haven House’s decade of success.

Homelessness remains a pressing issue in the community, the Fredericksens said. The housing market is tight, no matter how big the buyer or renter’s budget. Low-income housing that is actually affordable for Haven House residents who are successfully completing their program tends to be in areas that trigger the behaviors and decisions that caused the clients to become homeless in the first place, Larry said, and they fall back into that cycle.

Haven House’s next big plans can help break that cycle. In about a year, Haven House intends to break ground on a 9,000 square-foot facility that includes more classroom space, but also additional capacity for families in need of the transitional program. The plan is to also include a handful of low-income apartments that families who graduate the transitional program can move into and pay rent “at break-even (rates) for us,” while they save, Fredericksen said.

“The problem is, in Montrose and Delta and throughout Colorado, housing has become less and less affordable, either for rent or purchase. This would provide a step the graduating families they could take that would be affordable. It would provide them a stepping stone into the community,” he said.

The growth at Haven House wouldn’t be possible without staff and volunteers. “It’s been a great ride for us and the staff. We have a great staff,” Fredericksen said.

Martinez said he recently served a man with children and worked with Haven House to secure them a place in the coming week.

“We’re all working together for the same end. We’re all in it from a different perspective,” Martinez said, congratulating Carter, the Fredericksens and everyone involved in keeping Haven House going.

“I think that reaching that 10-year anniversary is fantastic,” he said. “I’m looking forward to when they reach 20 and 30 years, because they’ve done nothing but good in this community.”

• A ribbon-cutting for the grand opening of the Kid's Haven Early Learning Center will be at 5 p.m. May 13. After, there will be a presentation and open house at the main dining room, with light refreshments to celebrate Haven House’s 10th anniversary.

• The fourth-annual Home Run Poker Run in support of Haven House is June 5. Sponsored by Harley Davidson and Davis Service Center, the run is a motorcycle ride over the Grand Mesa, beginning at 9 a.m. in Grand Junction at the Harley Davidson shop. The ride concludes at Haven House with a free barbecue from Still Smokin’ Meats, live music and entertainment, a 50-50 split cash raffle, other prizes and a men and women’s slow drag “race” contest. Register at havenhousehomeless.org and receive $5 off your first hand. Don’t forget to buy a raffle ticket for the 50-50 split cash raffle.