In February 2021, less than a year into the COVID-19 pandemic, Montrose County School District needed to shut down two schools because of another health hazard: asbestos.

Moreover, the contractor did not obtain performance bonds for the project.

The immediate aftermath of mitigating the asbestos at both schools cost the district well over a million dollars and caused instructional disruptions to hundreds of students. 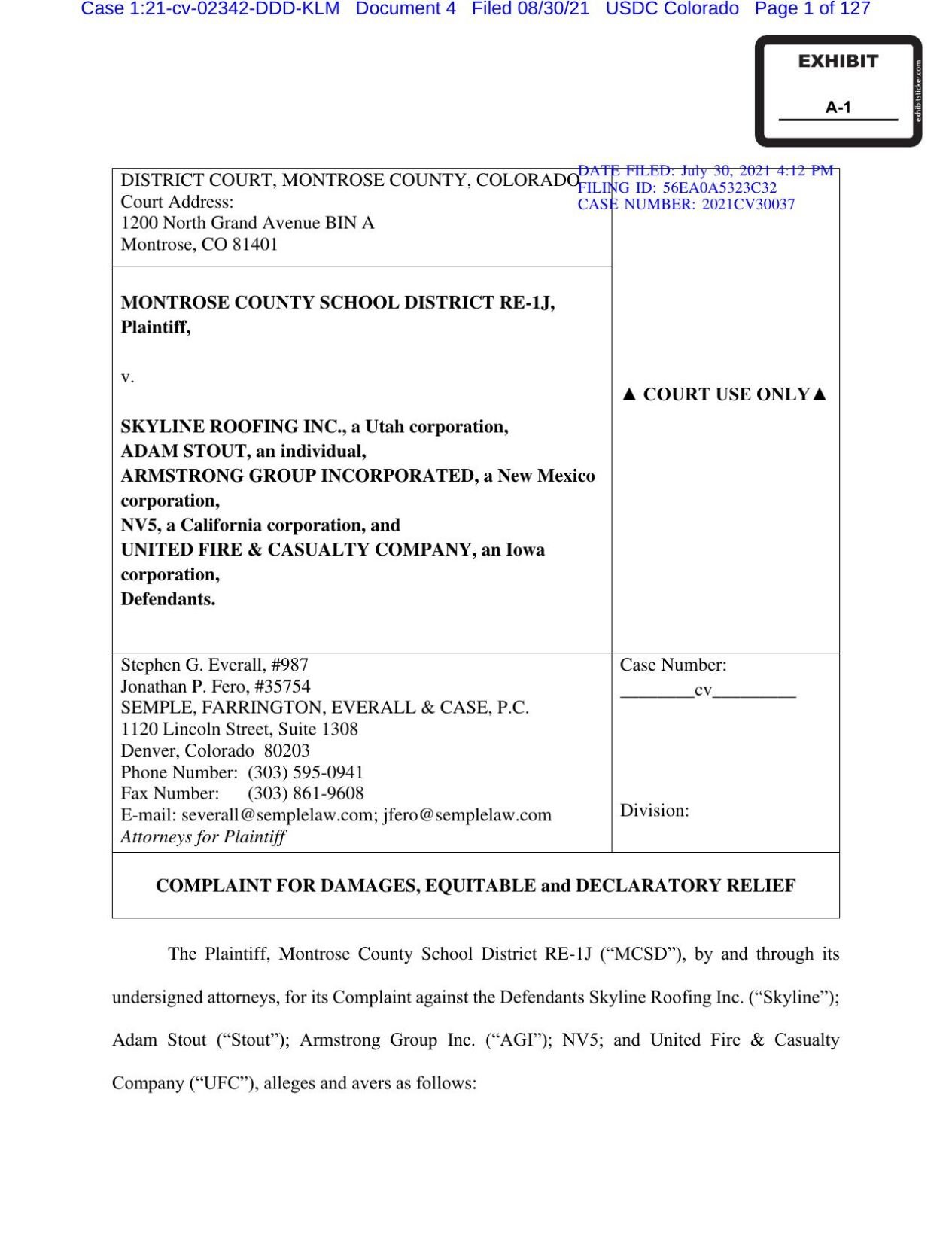 The MCSD board voted Tuesday night to accept a $815,000 settlement with the companies named in the lawsuit after receiving legal advice in an executive session closed to the public.

The precise terms of the settlement were not immediately available in federal court records. MCSD officials declined to comment or provide a copy of the terms.

MCSD first started considering replacing roofs at several buildings in 2018. According to the original complaint, the district hired Armstrong Group Incorporated, a New Mexico architectural firm that specializes in roofing, to design the project and administer the construction for nearly $325,000.

AGI recommended that MCSD hire an environmental consultant in March 2019, who found materials laced with asbestos on the roofs at Montrose High School, Centennial Middle School and Olathe Middle School.

Asbestos is a mineral fiber that has been widely used in construction because of its insulating and heat-tolerant properties.

When disturbed, though, asbestos fibers can enter the respiratory system and cause serious long-term health problems, according to the Environmental Protection Agency.

Utah-based Skyline Roofing, Inc. won the bid for roofing contracts at MHS, CtMS and OMS, totaling $1,962,700 for all three schools.

(Adam Stout, the president of Skyline, is also named as an individual defendant in the lawsuit. A representative at Skyline confirmed Friday that Stout is still at the helm of the company.)

An addendum to the contract with Skyline before the start of the construction states that the contractor was responsible for asbestos abatement.

Skyline initially said they would not be able to complete the project in Olathe, so AGI gave the lot to another contractor. That contractor fell through on Olathe around the start of the 2019 school year, so Skyline got it back, with work rescheduled for 2020.

Skyline started working on the roofs at Centennial in July 2019 and had completed most of their work by September 2020, the complaint says. Final documentation was submitted on Dec. 2, 2020.

But on Jan. 31, 2021 at Olathe Middle School, an inspector found roofing debris from Skyline in the building’s plenum, the space between the roof and ceiling where air circulates.

The inspection was part of a competitive state grant application for security systems upgrades, Superintendent Carrie Stephenson told the Daily Press in February 2021.

The inspector suspected that asbestos was present in the debris, so he contacted MCSD and the Colorado Department of Public Health and Environment.

MCSD shuttered Olathe Middle/High School and Centennial Middle School. Students and teachers abruptly switched to remote learning for the second time in less than a year.

Students had been doing remote learning since the COVID-19 pandemic started in March 2020, but middle and high school students were splitting their time between school and at-home instruction when the school year started again in fall 2020.

Operations resumed in mid-February with a hybrid model and transitioned to a fully in-person option on March 15, according to previous reporting.

“If I would have had one more middle school teacher, it wouldn’t have worked,” Olathe Principal Scot Brown told the Daily Press in August 2021.

Teachers moved around classrooms in the high school wing. “Every space in our school was busy non-stop,” Brown said.

At Centennial, sixth grade students were able to return to the northern building, which did not have asbestos issues. Seventh and eighth grade students attended in-person school at the Pavilion Event Center through the end of the year starting on March 15.

Meanwhile, MCSD was working to quickly find a contractor for asbestos abatement to get the buildings safely operational again.

MCSD told Skyline and AGI about the test results and “invited their assistance,” the complaint says. Skyline did not respond to the request for qualification/proposals issued on Feb. 16, 2021.

When the request closed 10 days later, the lowest bid was nearly $1.6 million.

MCSD rejected all of the proposals and issued a second request on March 11, 2021 with a two-week deadline.

Skyline did not respond to the second request for proposals, but denied liability to the school district, the complaint alleges.

On the last day of March, MCSD awarded the contract to the lowest bidder, JKS Industries, to the tune of $794,362 for both schools. The cost of the projects increased to $1,149,717 while the work was underway.

The school district also paid nearly $123,000 to an environmental consultant to plan and oversee the abatement project and needed to pay over $141,000 to replace damaged drywall and ceiling tiles at both schools.

The complaint also alleges that the school district has had to pay unspecified costs for moving, storage and rental costs while the abatement work was underway.

In addition to the mishandled asbestos, Skyline also did not have sufficient financial backing and insurance, the complaint alleges.

Skyline said in their contract that United Fire & Casualty Company would back their performance and payment bonds. But the final draft, signed by Stout and MCSD’s then-board president Tom West in June 2019, did not have an exhibit detailing the insurance and bonds.

An architect with AGI verified the authenticity of the contact before work started.

After the asbestos was discovered, Skyline told MCSD and AGI that they had never gotten bonds for any of their three projects, the complaint alleges.

Skyline submitted a claim to their insurance on Feb. 4, 2021, which told them that the asbestos abatement was not covered because of exclusions in the policy.

MCSD sent Skyline a notice of claim on March 10, 2021 and served another to AGI on June 1, 2021. Both companies denied liability to MCSD, according to the complaint.

The original complaint contains claims for relief against Skyline and Stout for breaching the contract and failing to post the bonds.

Multiple claims for relief were also filed against AGI for breaching the contract, not properly inspecting Skyline’s work, not catching that Skyline hadn’t posted the bonds, failing to complete construction documents and professional negligence.

AGI filed a countersuit against MCSD and a crossclaim against Skyline about the failure to post bonds in early September, denying many of MCSD’s allegations. Skyline and Stout also denied many of the allegations in their response.