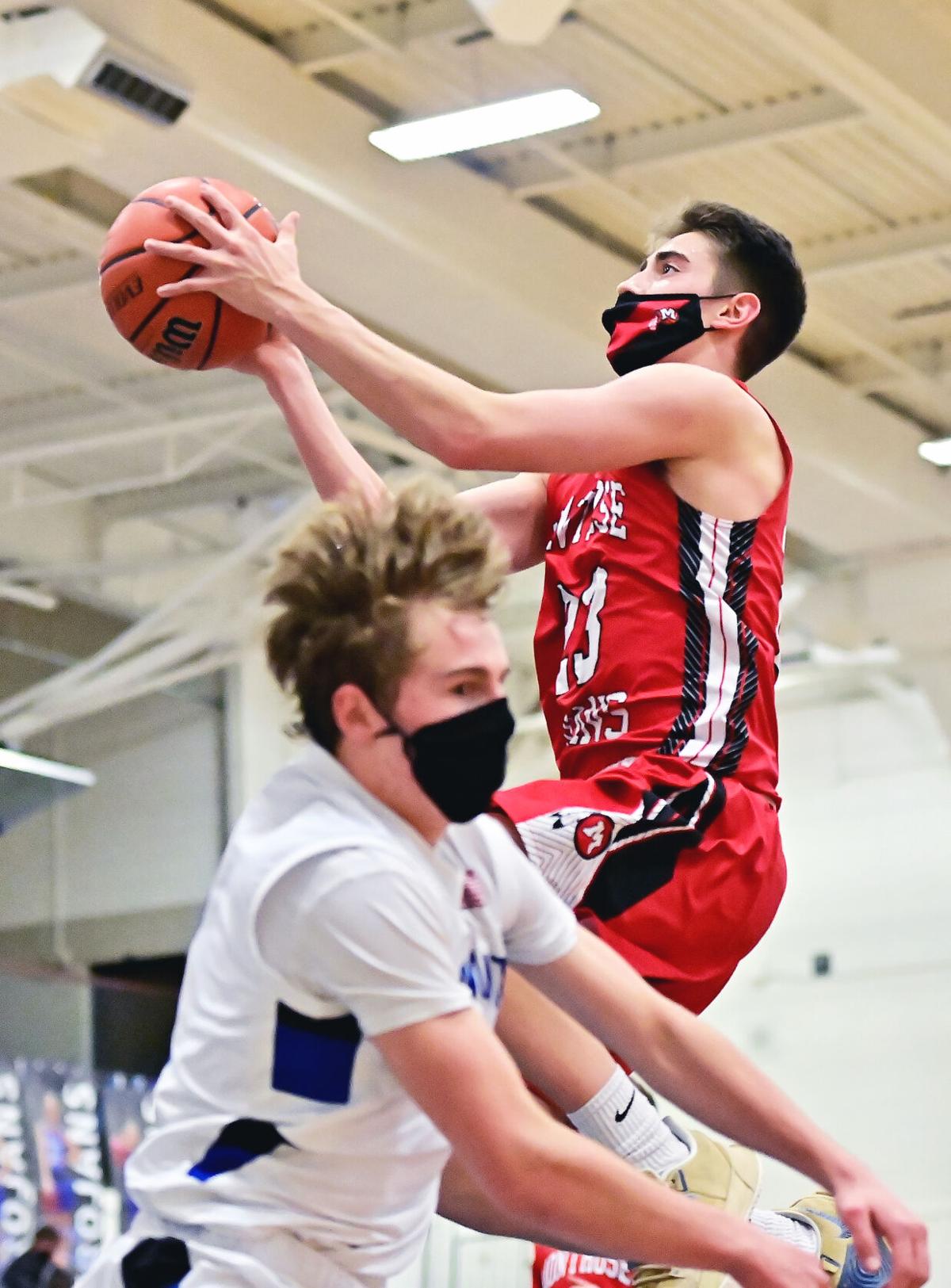 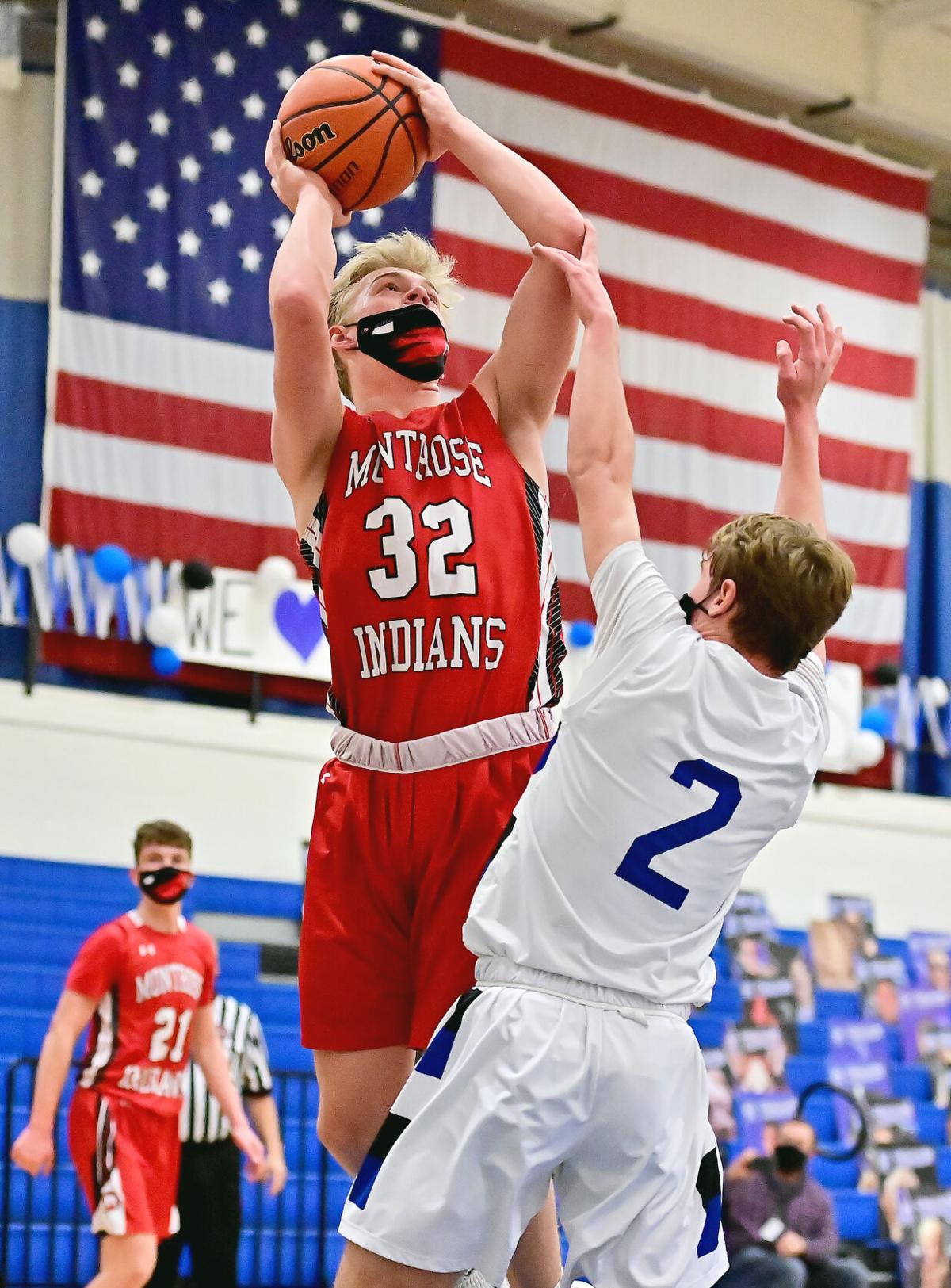 Montrose's Ashden Oberg shoots over a defender during a Final Four game of the 4A boys basketball state tournament at Longmont High School on Thursday, March 18, 2021. (Brad Cochi/BoCoPreps)

For the first time in 70 years, Montrose boys basketball will play in a state championship game with a chance to win the program’s first title.

“I’m still in shock — I told the guys in the locker room, ‘this is a compliment to your guys’ work ethic, putting up with me yelling and screaming at you for the last four months. You guys have bought into that culture and what needs to be done,’” Montrose coach Ryan Voehringer said postgame. “They’ve earned it.”

Longmont had no answer for Montrose’s defense, scoring a combined 10 points in the second and third quarters (six in the latter).

The Trojans’ Keegan Patterson had eight points, but six of them came in the fourth, with the game close to sealed. No other Trojan scored more than five.

“Team defense was great, I can’t ask for anymore,” Voehringer said. “I kept thinking they (Longmont) were going to make a run but they never did… that’s a good offensive team. Very well coached and disciplined. We held our spots and did our roles and it was just a great team defensive effort.”

To add to the Indians’ momentum, Jordan Jennings converted a buzzer-beater three as the third period ended.

Jennings has praised the Indians chemistry — one that’s strengthened by the starters’ willingness improve in the offseason and play together at the Montrose Recreation Center.

“I’ve been saying this all year — we got a great group of guys that get along very well,” Jennings said postgame. “If we’re not practicing or traveling, we’re doing stuff together.

“We have a great bond… I don’t think a lot of people expected us to make it this far. We wanted to show them that we could do it and that we were working hard.”

At halftime, Montrose led 19-15 after two quarters of defensive play from both sides. In the third quarter, though, it was all Montrose. The Indians outscored the Trojans 15-6 in the quarter, helped by a small but energetic 8-2 run in the final three minutes.

“First-half was a good defensive game,” Cheezum said. “In the second-half, we wanted to drive and kick more, and that’s what we did.”

Though Longmont brought heavy full and half-court pressure throughout the fourth, the Indians remained patient, as they always seem to do, swinging the basketball around the perimeter, working their sets and finding the open man off an entry pass to Hutto or perimeter shot for Cheezum.

It helped Montrose shoot 59% (20-of-34) from the floor, including 6-of-11 from three, the team’s first time shooting above 50% beyond the arc this season. Montrose took care of the ball, dishing out more assists (13) than turnovers (11) for the 12th straight game.

To boot, four of five of Montrose’s starters shot better than 50% on Thursday.

That offensive focus allowed Montrose to extend their lead to 14 with 1:21 remaining in the fourth quarter, all but sealing the Indians’ Final Four win and continuing their historic run and undefeated season.

“It felt good,” said Cheezum of the win. “All the work we’ve put in over the years to get to this point. But we’ve got one more to go. Job’s not finished.”

Montrose will play No. 5 Mead (14-3) at 5:30 p.m. on Sunday at Broadmoor World Arena in Colorado Springs for the 4A title. Mead defeated Pueblo South 73-53 on Thursday, and the Mavericks have one state title (in 1957 over Wiggins), according to Colorado Preps.