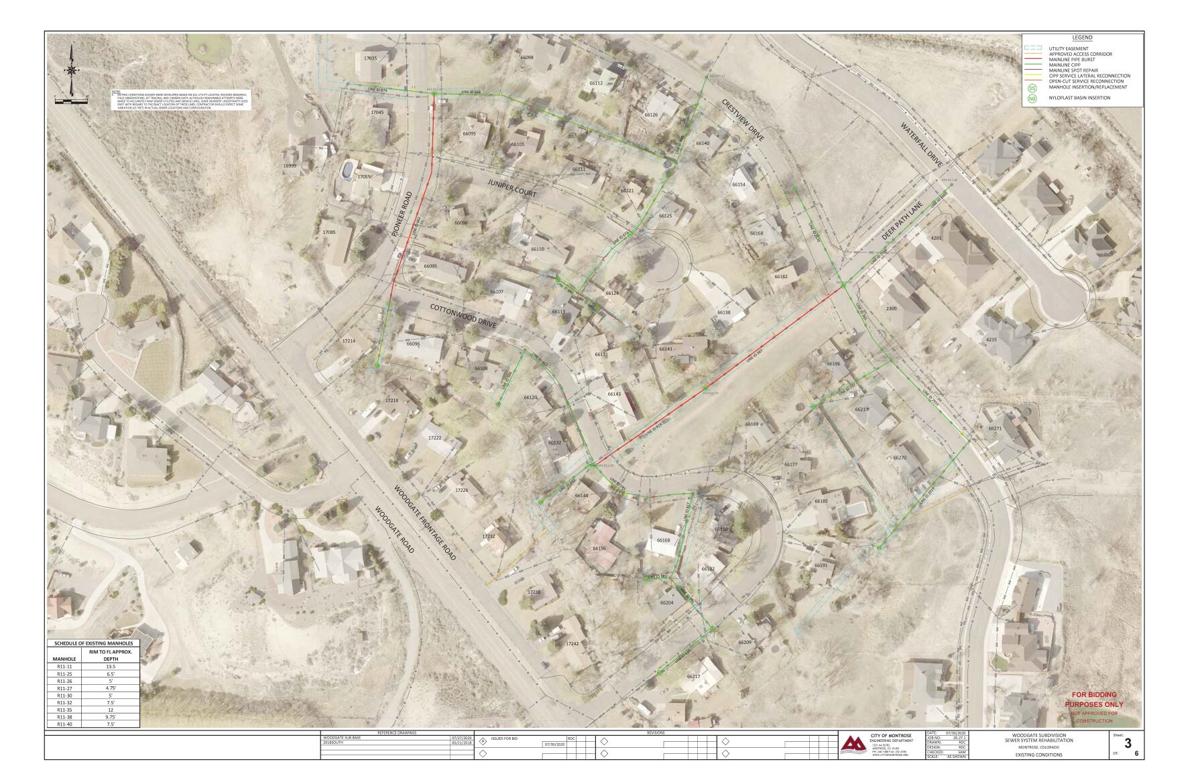 A map of the Woodgate Subdivision sewer system project indicated the type of work to be completed. 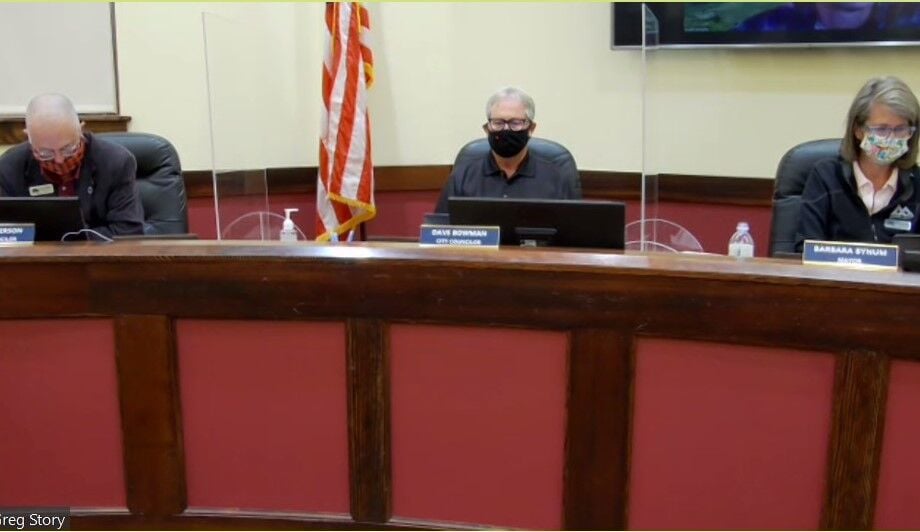 After discussions at a work session and regular meeting, the Montrose City Council voted unanimously to award to Haynes Excavation a bid totaling about $972,050 for the Woodgate Subdivision sewer system rehabilitation project.

The Woodgate Subdivision is located along the eastern side of Woodgate Road south of Otter Road. The neighborhood was originally developed in the mid-1970s under Montrose County regulations with a sanitary sewer collection system running to a local sewage lagoon.

The lagoon was abandoned in the 1990s as public health requirements changed. At that time, the neighborhood annexed into the city and a sewer main was extended to the neighborhood. Since the annexation, Murphy said the condition continued to diminish to the point where residents are experiencing back ups, so he said addressing the system is necessary.

As part of the annexation, the city inherited operation and maintenance obligations for the sewer system.

“The system was built to an unknown or non-existent standard in the county and is experiencing a lot of structural failures, root intrusions blockages and these are the sort that are warranting a full rebuild of the system,” he said.

As Murphy and other city employees gathered information about the condition of the system, the city worked to keep Woodgate residents informed. He said they sent letters to residences in the neighborhood and will continue to work with residents to coordinate work that impacts yards.

Murphy also said many subdivision residents are aware of problems with the sewer system because those problems are also present on their private lines. In general, he said the city has had great support from residents.

Residents are also encouraged to contact the city with any questions or to be placed on an email list for updates on the project. To receive notifications, email rcushenan@cityofmontrose.org. Routine updates will be posted at www.MoveMo.co.

A challenge with rebuilding the system is the location of the existing system on residential properties as the pipes run through the backyards of private lots, which requires coordination with residents for access. It also requires the contractor to use different techniques for updating the pipes, instead of digging up the existing pipe and laying in new pipe. There is also no formal piping network map.

“So it doesn’t lend itself to a conventional going in and digging them up and replacing the lines,” Murphy said. “Hence, we’re using a lot of trenchless technology to try to limit the impacts to all of the residences.”

The technique is called pipe-bursting: contract workers run a cutting hydraulic head and pull a new pipe inside the old pipe while bursting the old pipe out of the way. They will also install an ultraviolet cured-in-place pipe (CIPP) lining system, which acts like a resin sock that runs inside the line to cure. The resin strengthens the pipe and allows workers to reconnect service lines without residents experiencing any disruption in services.

After putting out a call for bids on Aug. 20, the city received ones from Haynes Excavation, Skip Huston Construction and Ridgway Valley Enterprises. The council awarded the bid to the lowest bidder Haynes Excavation at $972,050.75.

Throughout the rehabilitation, Haynes Excavation will complete spot repairs where failures of the pipe have occurred, insertion of new manholes and cleanout basins, and utilization of trenchless technologies to replace pipes.

City Councilor Roy Anderson said he appreciated the work city staff have done to take care for residents in that neighborhood.

“I think it’s really admirable the amount of work you’ve done to put this design together and to ensure that each landowner has continued service,” Anderson said. “I know that’s not easy.

“Everyone involved has done a great job. I think we’re taking good care of our community down on that south end.”

The projects contain a 10% contingency in the hopes any unknown costs can be covered with those funds, rather than having to issue a change order through the council.

“Although we’ve done a lot of investigative work to get to this point, this is a relatively high risk project because there are a lot of unknowns,” Anderson said.

The project is budgeted over a span of two years. The 2020 budget included $600,000 for completion of the project. Since the time the council approved the budgeted amount, city personnel discovered the system was in worse shape than anticipated, so the cost to renovate is higher. Approximately $400,000 of the project costs are anticipated to be expended in 2020 within the budgeted capital line. The remaining balance is being proposed in the sewer capital line of the 2021 budget.

Work is expected to last through May 2021.

Lauren Brant is a staff writer and digital content coordinator for the Montrose Daily Press.