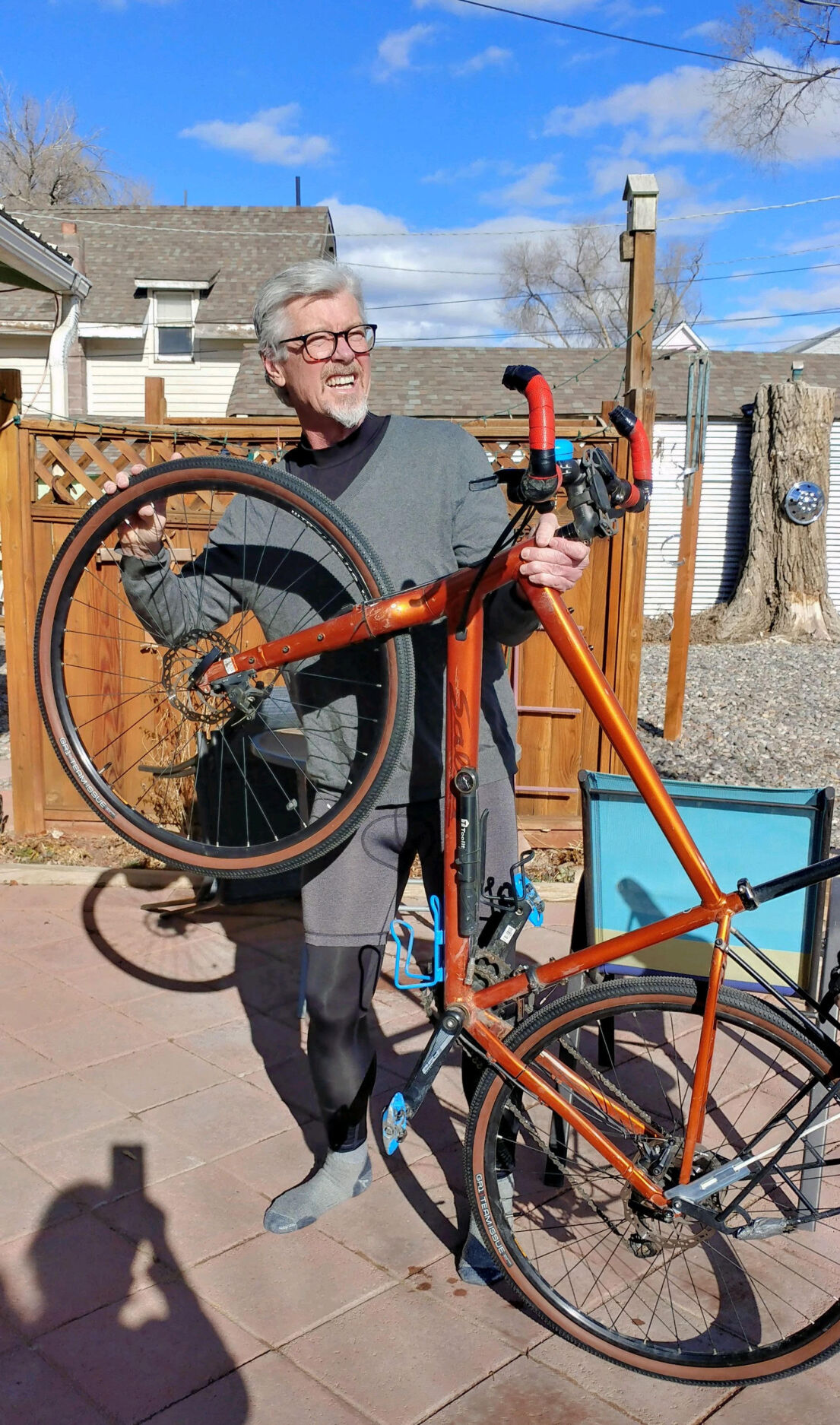 Lewis Williams posing with the bike he'll be riding on his five month Plein-Air journey.

The bike Lewis Williams will be riding as he paints his way to Bar Harbor, Maine.

Lewis Williams posing with the bike he'll be riding on his five month Plein-Air journey.

The bike Lewis Williams will be riding as he paints his way to Bar Harbor, Maine.

Ideas come in all shapes and sizes, and some come on the brink of a birthday.

On the eve of his 60th, Williams decided that he needed to rattle the cage a bit and “see what would shake out.”

“Art is therapeutic,” he said. “The idea is to combine my love of being outdoors and bicycling, and my love for art — to try to put those two together with a trip across the country.”

Williams will be taking part in the Red Rock Arts Festival, a Plein-Air painting competition for those who love to paint outdoors.

Plein-Air is a French word for outdoor painting. Painters go outside and view the landscape in real lighting.

The painters believe their colors to be more accurate through this medium.

“They would paint very quickly to capture the scene. They might do two or three over several days, and then take those studies back to the studio to do a bigger, finished piece,” Williams said.

He added that audiences have enjoyed the energy in these paintings because the art is painted so quickly.

People love the art so much that there are competitions all over the world, usually in scenic areas. Some of the competitions require an invitation, but others are open to anyone.

The trip itself has taken a year and a half of preparation for Williams and his wife, who will be travelling with him on the five-month painting journey.

“Usually people are doing these competitions unsupported, where they carry everything with them,” Williams said.

“I don’t know if many people take on this idea of painting and bicycling together. Because I have so many supplies beyond food, shelter, and water, I decided to get a van that we converted for camping.”

Behind the van, Williams and his wife attached a trailer to carry any extra painting gear, as well as food to limit their stops.

Williams described the setup as the couple’s “warehouse.”

The painter will be starting his trip in San Diego on March 1 and will finish riding during the first week of August in Bar Harbor, Maine, in Acadia National Park.

“I’m doing two national historic trails for about half of the journey,” Williams said.

“A ways out of San Diego, near California, on the Nevada border, I’ll be on the Old Spanish Trail.”

The Old Spanish Trail has four branches, and one runs through Montrose. Williams is most looking forward to the stops in-between his start and finish, in particular a trail in Santa Fe.

The trail begins in Grand Junction, where he’ll ride through to southern Utah, northern Arizona, and into Santa Fe, New Mexico.

“The Santa Fe trail happens to be celebrating their bicentennial year, so there will be big celebrations this year. So I’ll take that trail out of Santa Fe to Franklin, Missouri,” said Williams.

In the event that he takes longer to ride or paint than originally planned, William says he most likely will plan out some weeks ahead of time how to proceed, and will “mix up the riding with the driving to get to Bar Harbor, Maine.”

Shaking your life up isn’t just for Williams, however.

Williams has worked with senior citizens in the PACE program in Montrose, Eckert and Paonia. The message has stayed the same: Find creative outlets in your life.

“The idea is for people to understand more that they are not too old to do what they want to do or try something new,” he said.

“Being a creative person, I think it’s important for people to find a creative outlet, have a reason to get up in the morning. Finding creativity leads to a more enriched life and you make the world a better place.”