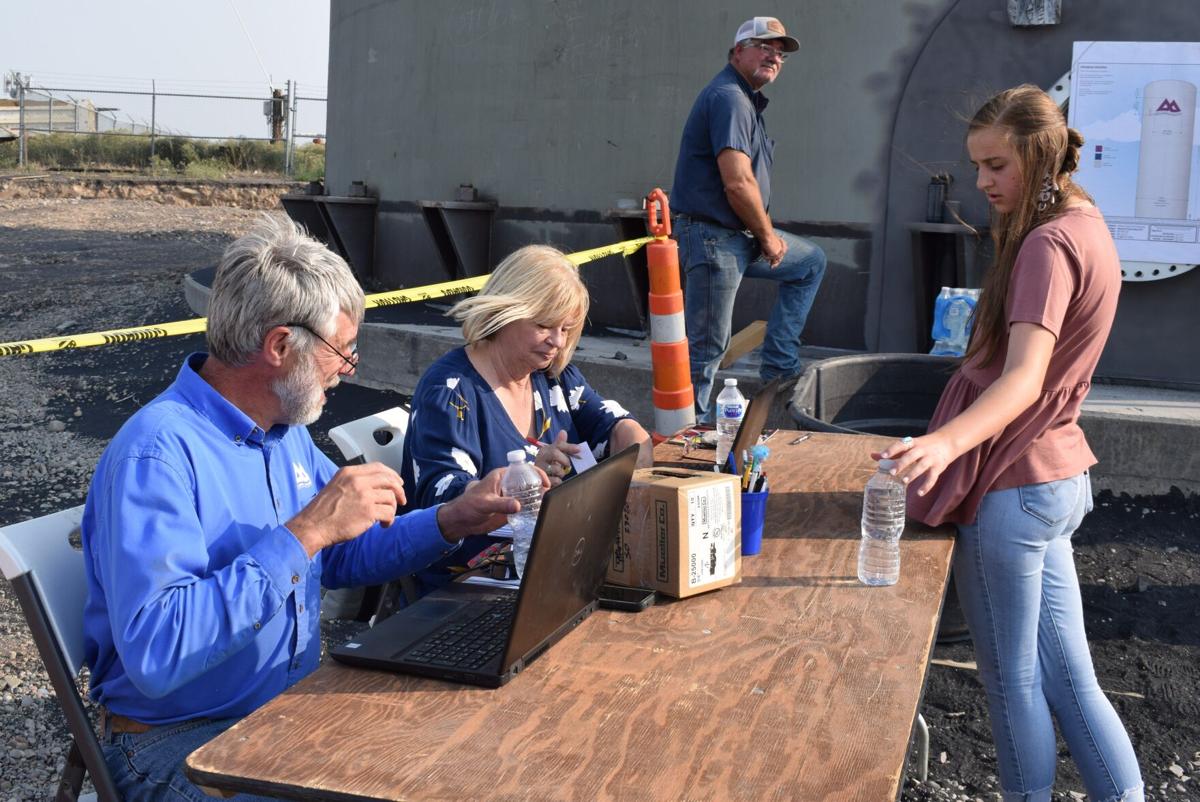 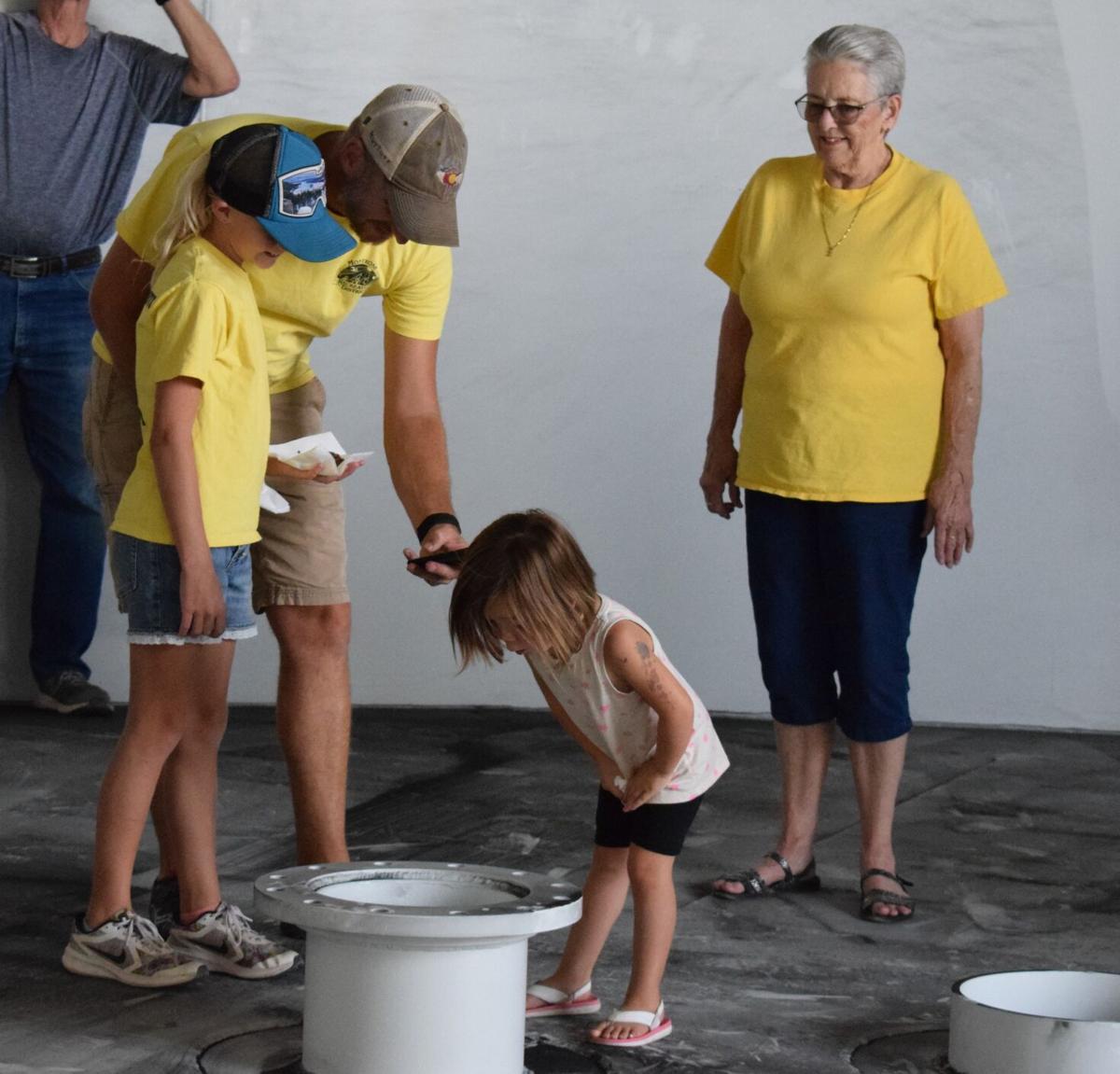 A little girl and her family peer down through the inlaid pipes at the bottom of the water tower. (Cassie Knust/Montrose Daily Press) 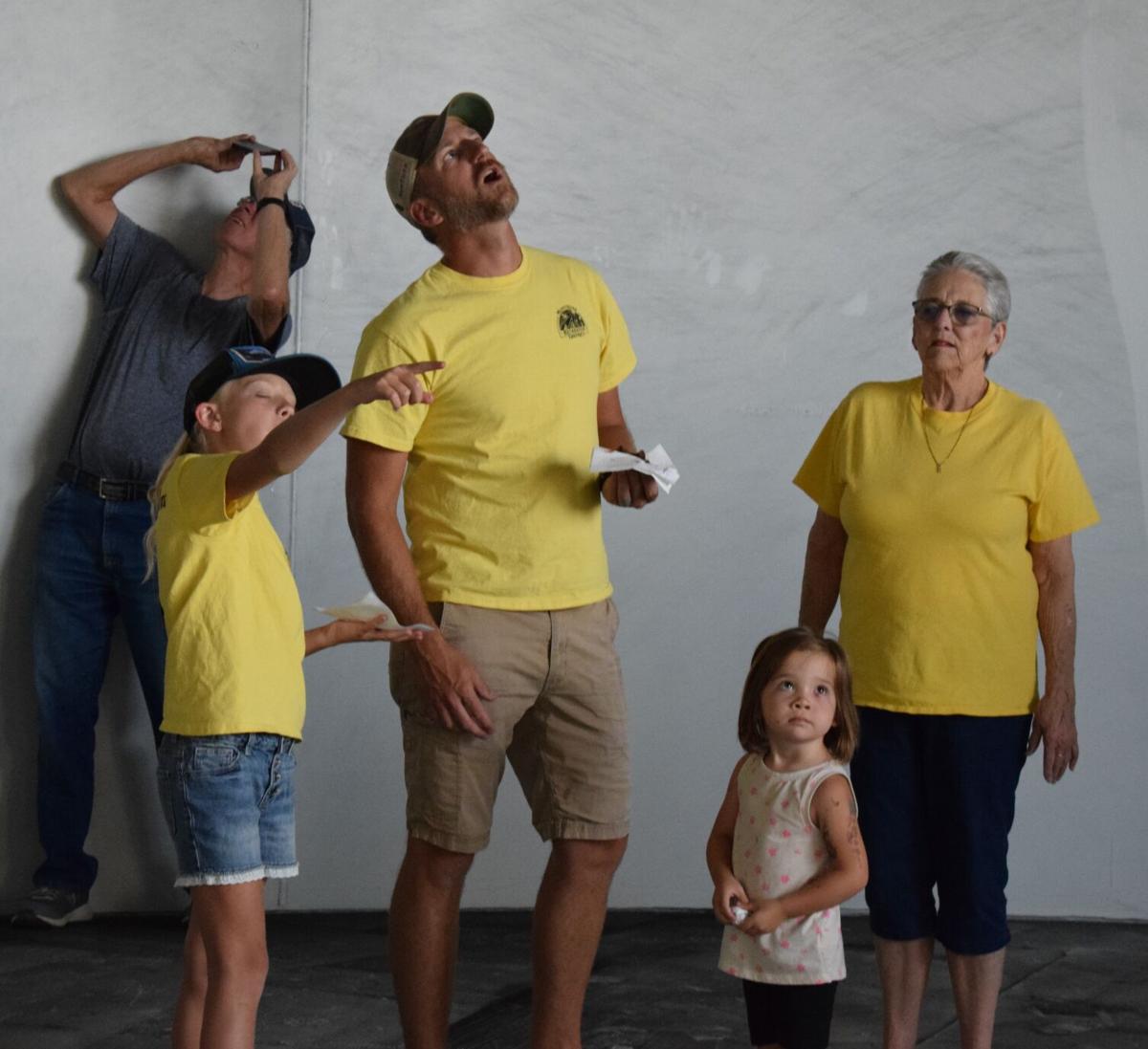 A family gazes up as they take in the new water tower. (Cassie Knust/Montrose Daily Press) 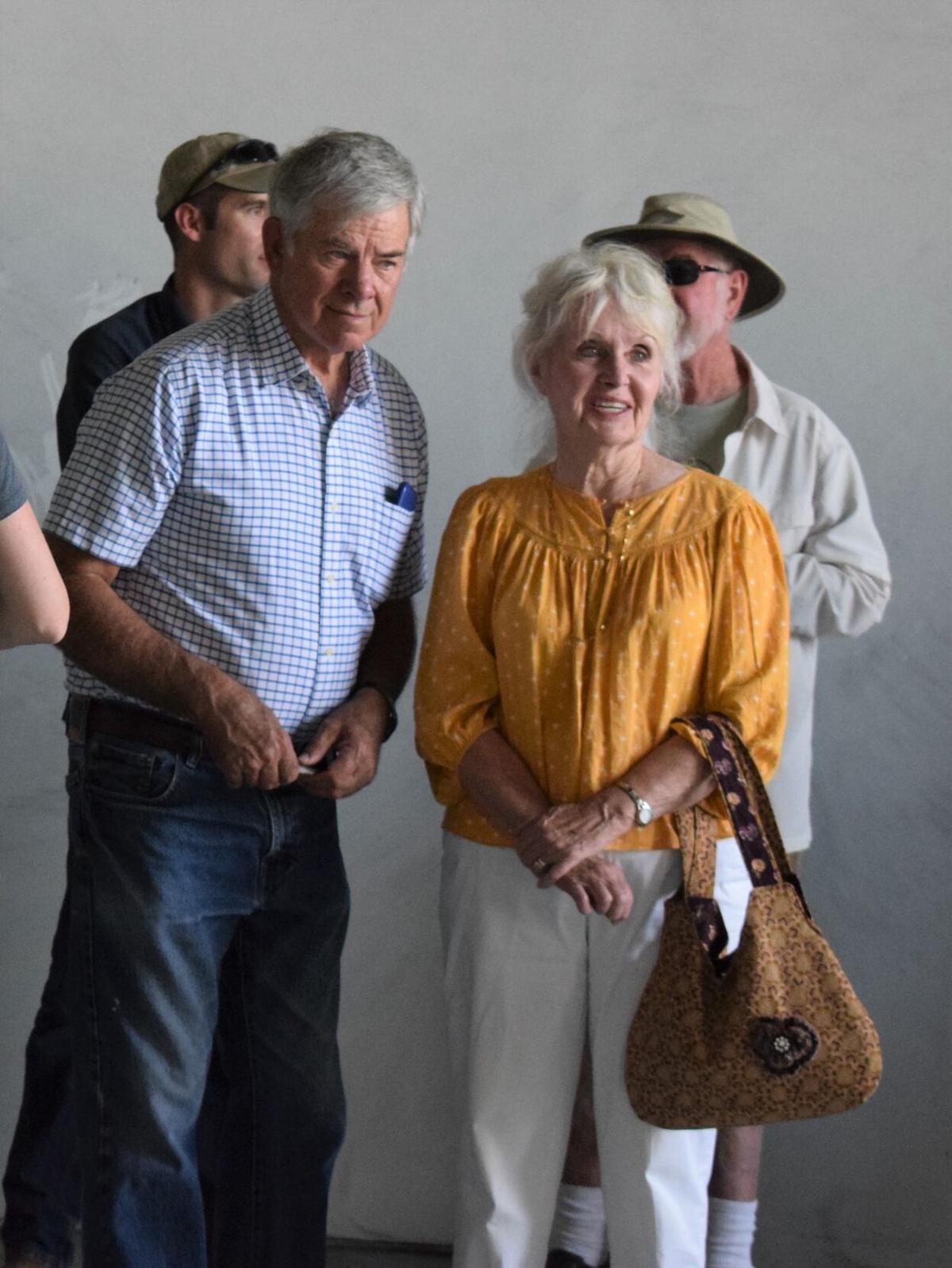 Bill and Nancy Sigafus of Montrose were curious to see what the inside of the tower would look like. (Cassie Knust/Montrose Daily Press) 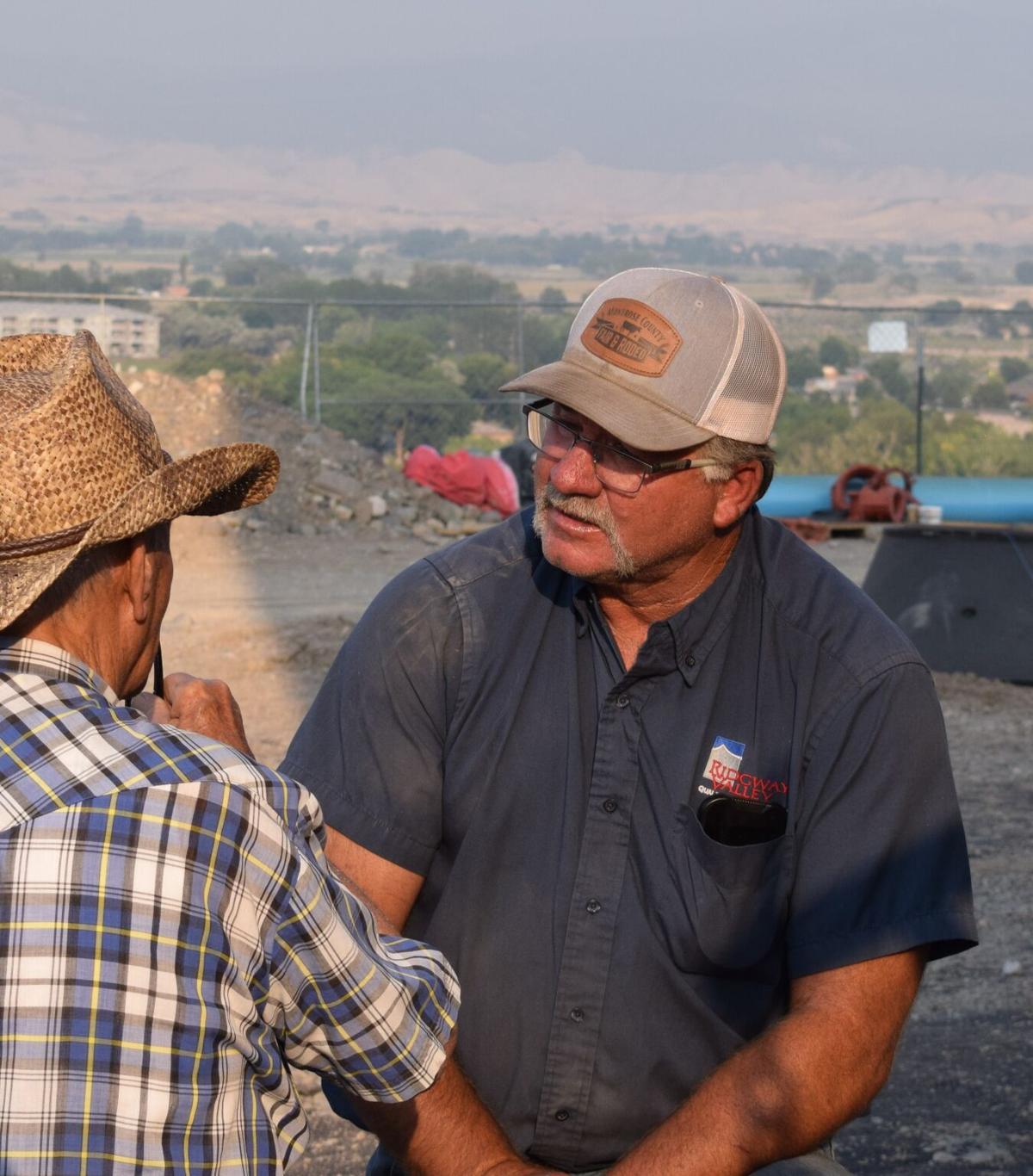 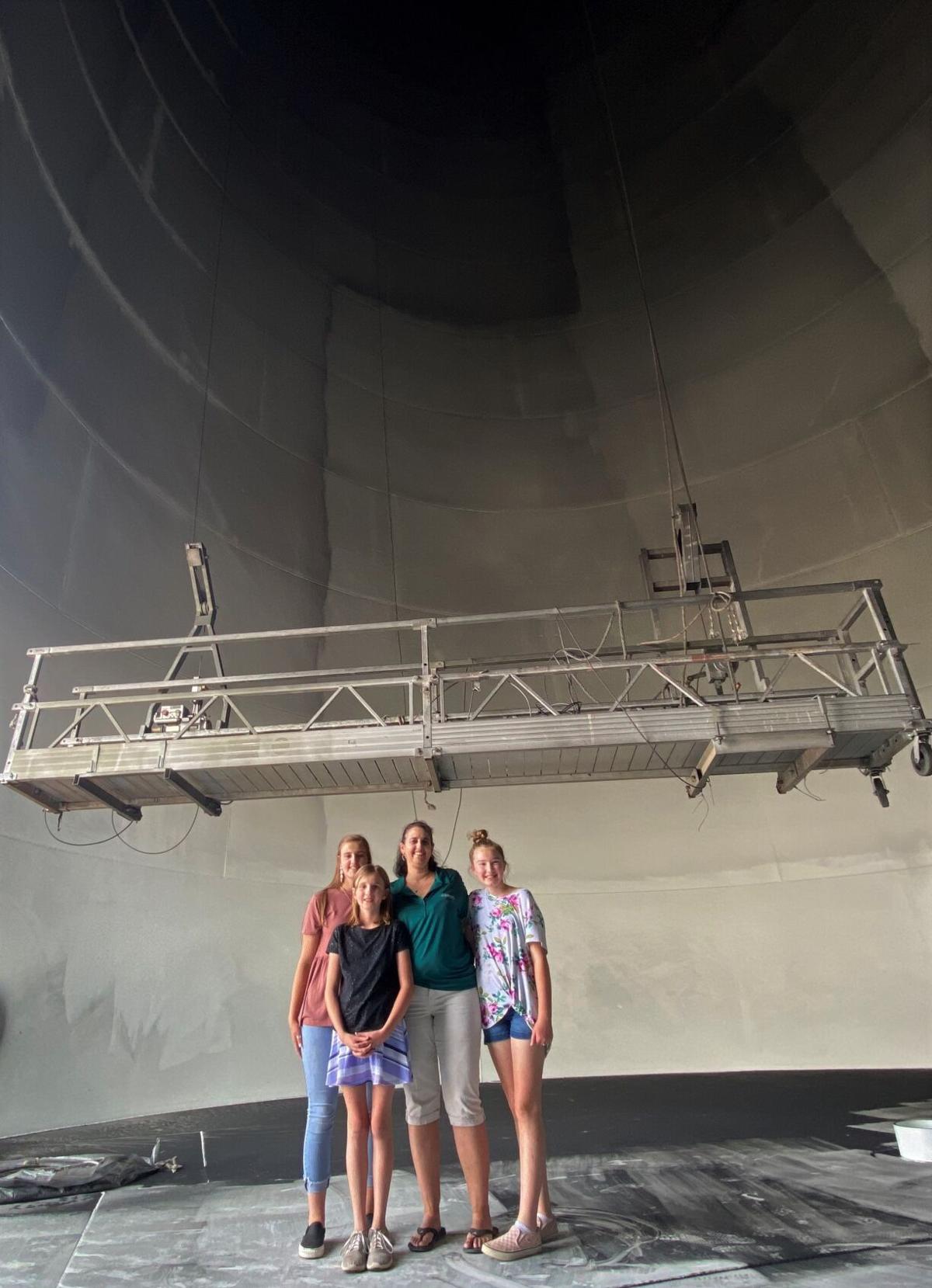 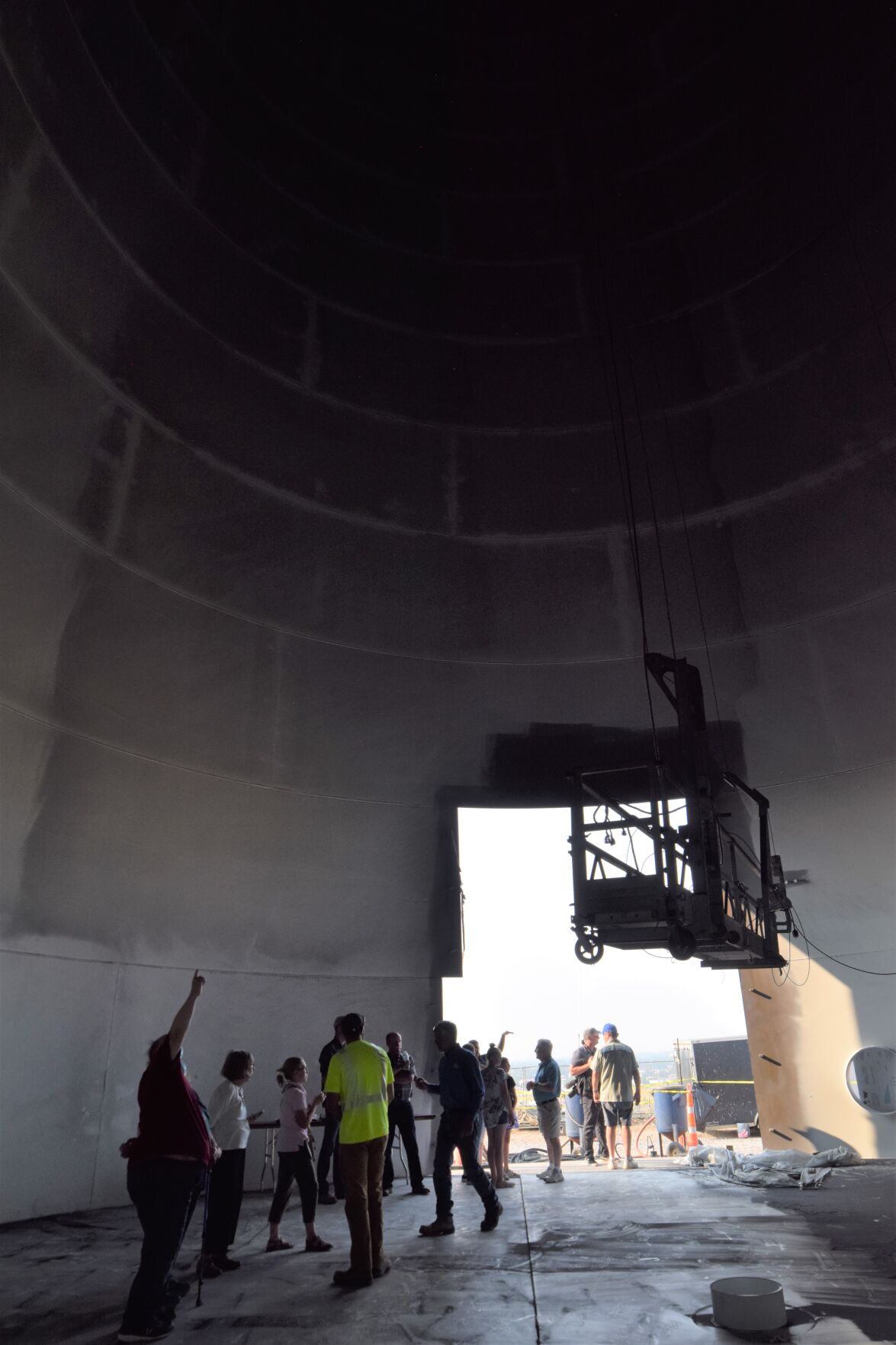 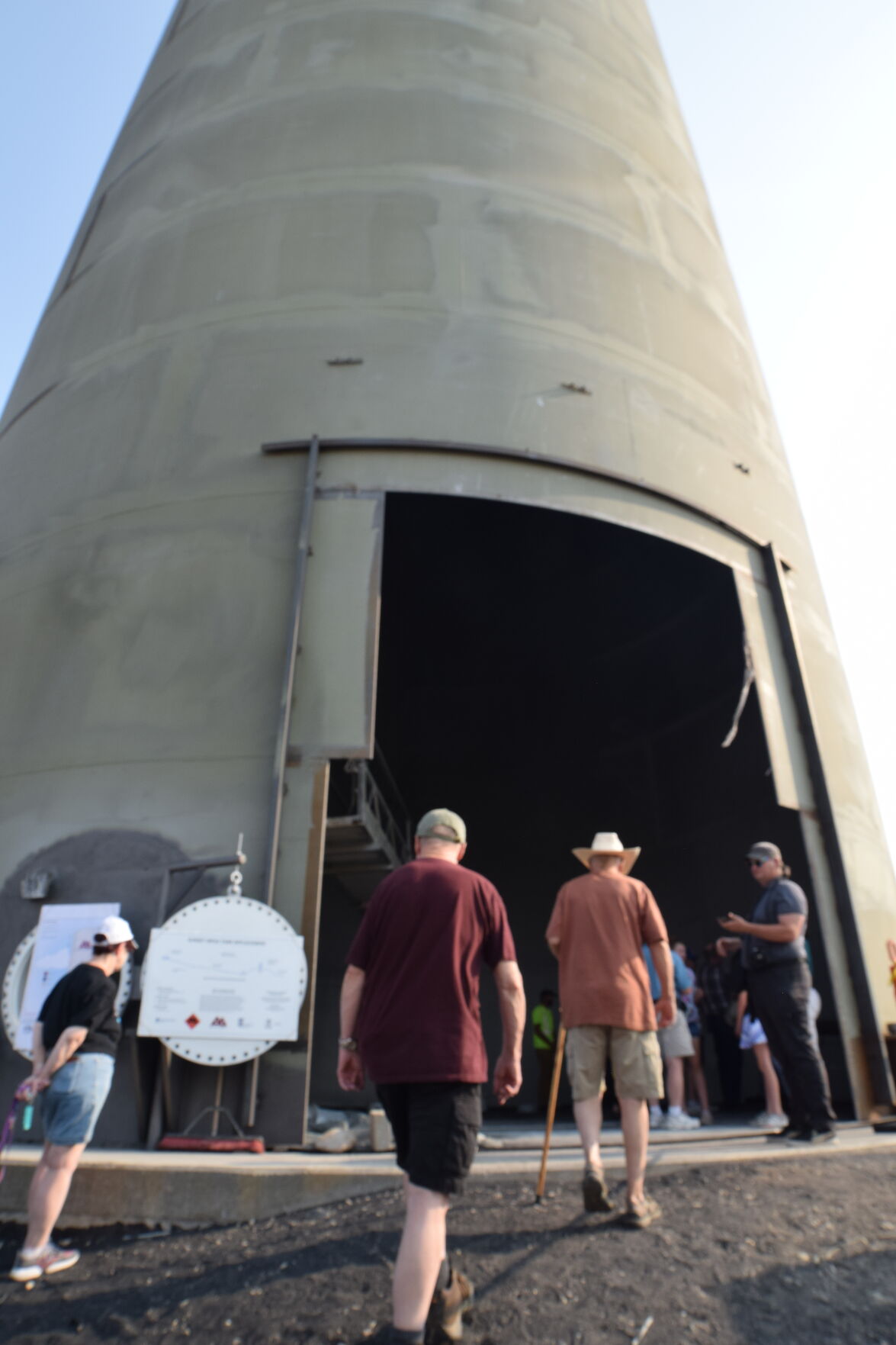 A little girl and her family peer down through the inlaid pipes at the bottom of the water tower. (Cassie Knust/Montrose Daily Press)

A family gazes up as they take in the new water tower. (Cassie Knust/Montrose Daily Press)

Bill and Nancy Sigafus of Montrose were curious to see what the inside of the tower would look like. (Cassie Knust/Montrose Daily Press)

The City of Montrose welcomed the public to roam around the nearly completed structure, which will hold 1.5 million gallons of water. In lieu of a formal presentation, city officials mingled with the crowd of curious citizens in and around the tower as the sun began its descent on July 12.

To build the water tower, Cory Noles explained that giant pieces of steel were welded together into 8-foot tall rings that were stacked on top of each other. Noles is the general superintendent of Ridgway Valley Enterprises, a commercial contractor on the project.

Despite the 135-foot height, Scott Murphy, the city engineer for Montrose and the project lead, said that the foundation is only 5 feet deep from ground level because the dirt in the area bodes well for a tall structure.

The water that is scheduled to fill the tower this November is sourced from the general city water system, which comes from the Project 7 Water Authority’s treatment plant on the east side of town.

Water towers help stabilize water pressure throughout the city. Murphy said that the tower fills up during lower demand periods, so when demand is high on hotter days, water pressure can stay constant.

The tower, which cost approximately $5 million, addresses the city’s need for water storage and prepares the city for continued growth on the western side of the Uncompahgre river.

In the case of an emergency water break, the tower can hold enough to provide the town with water for up to four days. Murphy said that only one line crosses the Uncompahgre river to the western side of town, so if a disaster struck and the pipe was obliterated, the water tower ensures that people would still have water.

The water tower is slated to sustain another period of growth in Montrose, and the city has made long-term plans to ease the construction of another tower in the future.

“At some point, the development will get big enough out here that we will need a second one,” Murphy said, gesturing to the area around the water tower. “This is all plumbed and piped to be able to just add a second one right there whenever the need should arise.”

Most people visiting the tower had one thing in common: They had never been inside a water tower, creating an experience they wouldn’t soon forget.

Montrose resident Diana McClister came to see the water tower out of curiosity. She appreciated the transparency on the city’s part throughout the project’s development and was surprised at how big the tower came out.

“From afar, you don’t really see how big it is!” McClister exclaimed.

The height of the tower presented a large, open space, which left everyone speaking around chiming echoes in the cylindrical chamber as they visited and learned more about the city’s new structure.

When asked if he had ever been inside a water tower before, Montrose resident Chase Jones joked that he had never been at the bottom of one, at least.

In addition to the cacophony of vocal echoes, some attendees bounced on the steel plates beneath them, creating a thunderous echo that vibrated through the structure.

City staff and council members also joined the foray, excited for the opening of the new tower.

“I think it’s amazing that the entire community took an interest in coming out to see this water tower,” said Councilor Anthony Russo. “I think putting it in here doesn’t just impact us today, but also the future as we expand the city.”

Councilor Barbara Bynum acknowledged that some citizens have expressed concern about the location and aesthetic of the water tower, but emphasized that the city needs to plan for growth and be ready when natural disasters strike.

“I don’t want to be the kind of community where something goes wrong in the future and everyone says, ‘Why didn’t they do anything?’ I don’t think that we should wait for a tragedy to say, ‘I can’t believe no one planned better.’” Sometimes when you’re on city council, your job is making some unpopular decisions that you know are the right thing to do.”

“There’s been a few hiccups, but we’ve worked through them,” Noles remarked.

The tower will be painted a lighter color to blend into the landscape. Murphy said that the tower will be emblazoned with the logo for the city, but artsier designs may be considered in the future.

Before the water tower is filled, it will need to be cleaned, disinfected and double-checked to ensure that it’s leak free.

Lisa Kuczmarski, director of business and tourism for the City of Montrose, came out in support of the engineering and water departments. While she didn’t have a role in the project itself, the director explained that her department pays close attention to every other department in the city and what everyone does “collectively” as a team.

“It’s a much-needed project for the city. You’d never think in a million years that you can experience something like this,” said Kuczmarski in admiration. “I’ve never been in a water tower!”