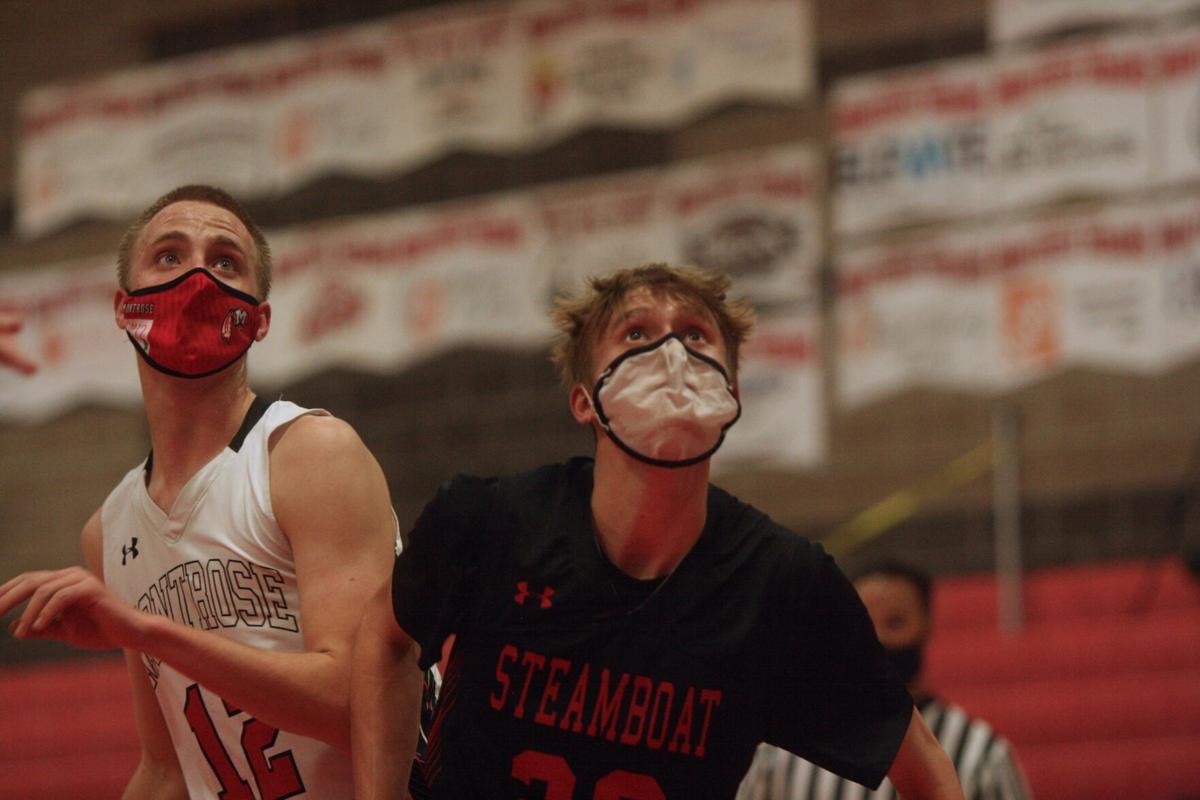 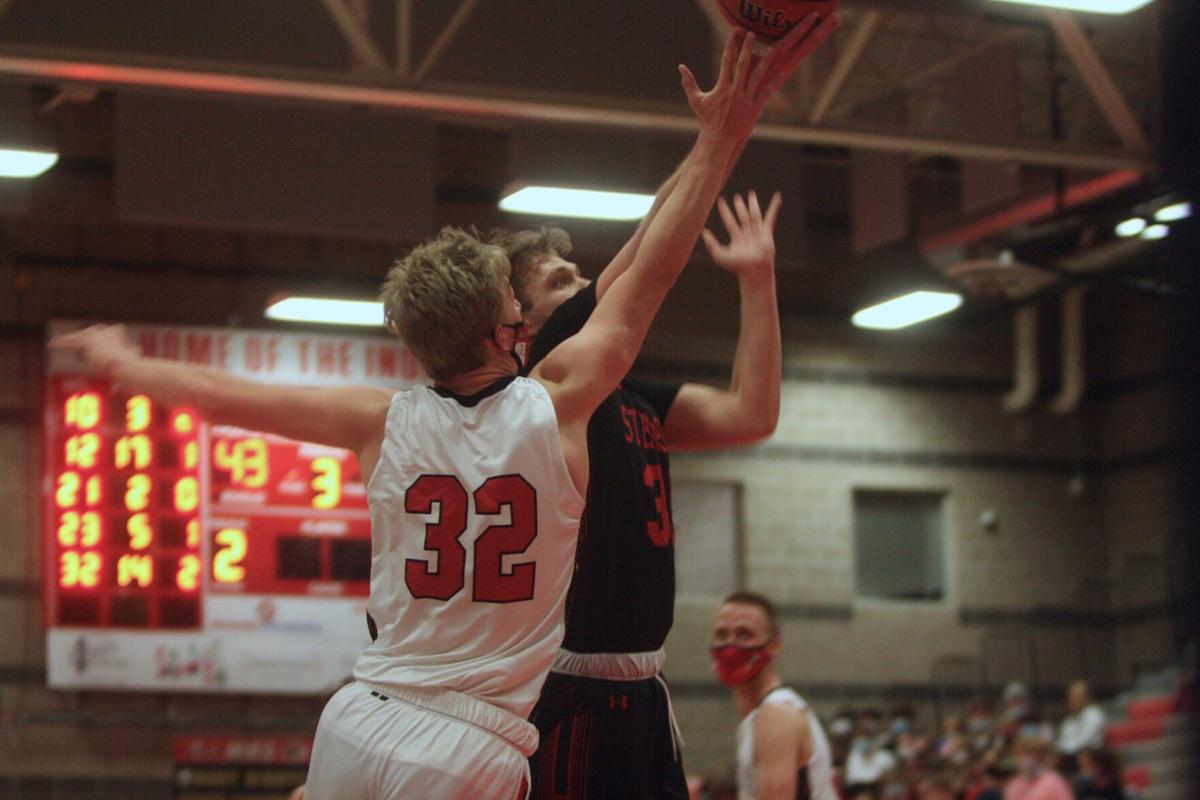 Up 14 with seconds remaining in the Great 8 game against Steamboat Springs on Monday, Montrose held the ball at the top of the court and waited for the clock to hit quadruple zeroes.

The feeling was finally settling in for Montrose point guard Trey Reese, who had the ball at the top of the key, lifted his right arm into the air and wore a smile behind his face mask as moment became reality.

The Indians just clinched a spot in the Final Four.

Behind Luke Hutto’s 24 points and another stellar defensive effort, (17-0) No. 3 Montrose defeated the previously undefeated (16-1) No. 6 Steamboat Springs Sailors 61-47 at Lloyd McMillan Gym. The Indians won their region and are headed to their first semifinal game since 1992.

“It’s amazing,” said Hutto on making the Final Four. “It’s a tribute to this team. I knew we had a great group of guys when I moved here freshman year. This is my vision.”

Unlike the Sweet 16 game against Green Mountain, Montrose controlled the narrative from the start against Steamboat. With the Indians feeding Hutto down low, they were able to nab a quick 16-9 lead after the first period.

Montrose didn’t stop in the second quarter, pounding the ball inside, this time to Ashden Oberg, who scored 10 points in the first-half.

“The game plan was to not let the big kid (Steamboat’s Eric Pollert) pin and seal and defend the three-point line,” Montrose coach Ryan Voehringer said. “We knew they shot the ball well from the three, especially No. 22 (Jakob Kreissig). The last three games, Kreissig and No. 4 (Cade Gedeon) played extremely well… we shut down their two leading scorers and did a great job defensively — great team defense.”

Kreissig and the 6’8 center Eric Pollert combined for 13 points (eight from Pollert) in Monday’s loss. The pair came in averaging double-digit points each, but were limited to six points in the first-half, neutralized offensively by help-side defense and fronting in the paint by Oberg and Hutto.

Montrose’s aggressive offensive attack put Kreissig and Pollert in foul trouble — they both picked up their third fouls in the third quarter, with Montrose sporting a 40-25 lead.

“I think they just physically took it to us,” Steamboat coach Michael Vandahl said postgame. “They were just the more physical team out of the gate. In the Elite Eight, you can’t afford to have a couple minutes of non-physical play. They just kind of punched us in the mouth and that was the story of the game.”

Montrose went into halftime with a 31-21 lead. Much of that was due to Hutto, who looked like someone that couldn’t miss. Hutto’s acrobatic, in-air movements allowed him to get friendly bounces near the net. He added 11 second-half points to finish with a season-high in the category, grabbed five rebounds and dished out four assists.

“I had the mindset that I’m the best player out there, and that if I go up strong and use my moves there’s no one that can guard me,” Hutto said. “I need to stay aggressive and keep my confidence because my first two playoff games my shots were off and I was low on confidence. This was a good bounce back game.”

For Oberg, it was the second straight game in which he scored in double-digits, finishing with 18 on 8-of-10 shooting and nine rebounds. Oberg was also physical around the rim, using post moves to finish over Pollert.

The Indians’ consistent scoring inside made sense. The Sailors made sure they weren’t going to be beat from the perimeter, extending beyond the three-point line to limit outside opportunities and holding Montrose to 1-of-4 shooting in that area.

That defensive focus from the Sailors, though, opened up dribble-drive lines for Hutto, and kept the Indians efficient as they shot 23-of-41 from the field.

“When he gets in the paint he’s tough to stop because he can use either hand,” Voehringer said of Hutto. “I thought he came out aggressive and they really didn’t have an answer for him. They (Steamboat) came out face guarding Fletcher (Cheezum) so it opened some lanes for Luke.

“... he still had double figures in his last two, but he looked like Luke Hutto tonight.”

The Sailors, in the fourth, ever so slightly began to inch back, closing Montrose’s lead to nine. But the Indians did their part at the charity stripe, converting six straight free throws to extend the lead and whittle away any last chance comeback from the Sailors. (Montrose was 14-of-20 from the free-throw line).

“It really just comes down to the defensive end,” Vandahl said. “... credit to Montrose.”

Montrose will face either No. 2 Longmont or No. 7 Pueblo Central, who play at 6 p.m. on Tuesday, in Thursday’s semifinal. Start of the Final Four game is to be determined.

The Indians will host a fourth straight playoff game if Pueblo Central wins.