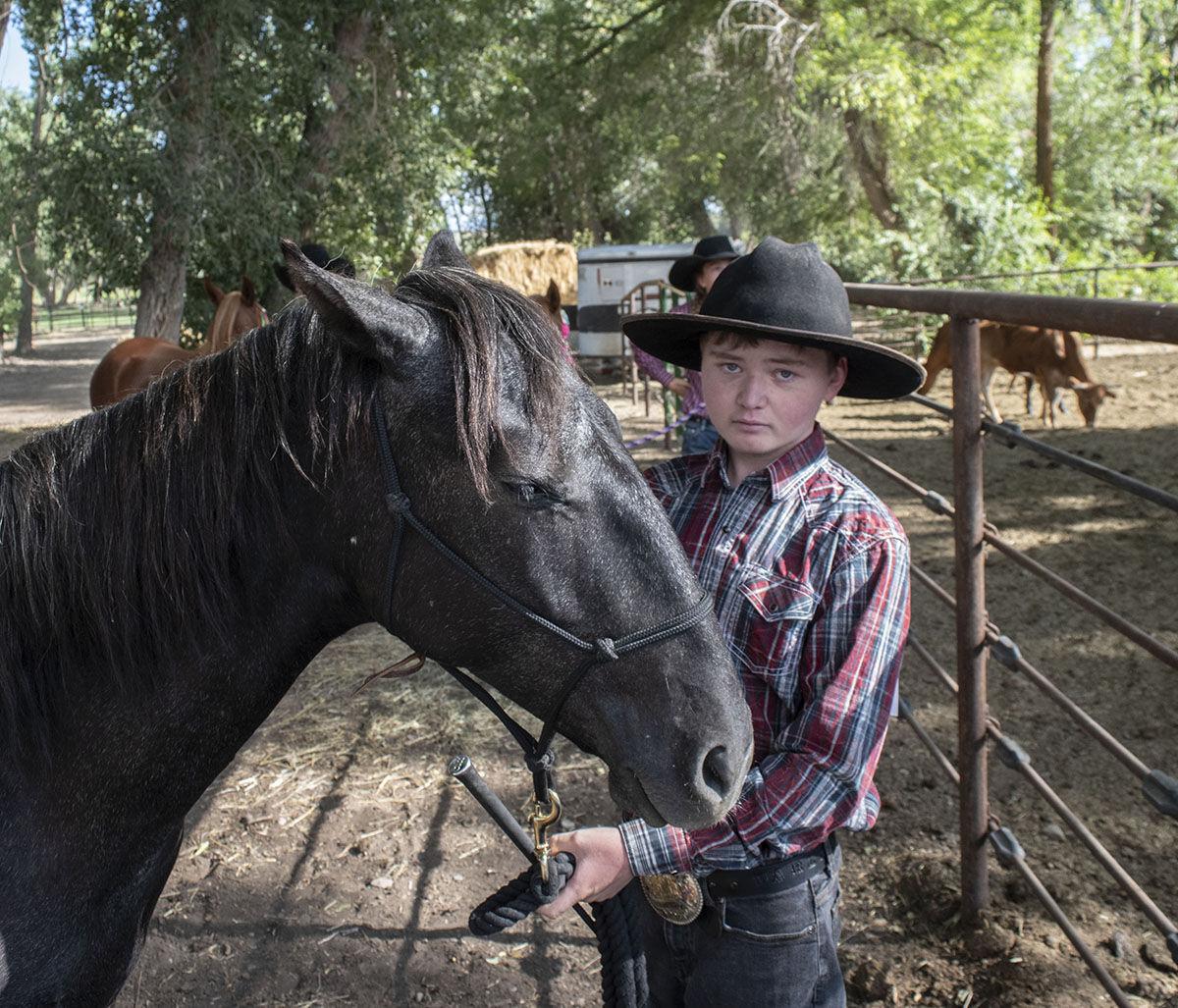 15-year-old Matt Schuetz and his mustang Onyx prepare for their day in the arena. Onyx is one of the horses from the first year of the program that Matt kept and saddle-trained. 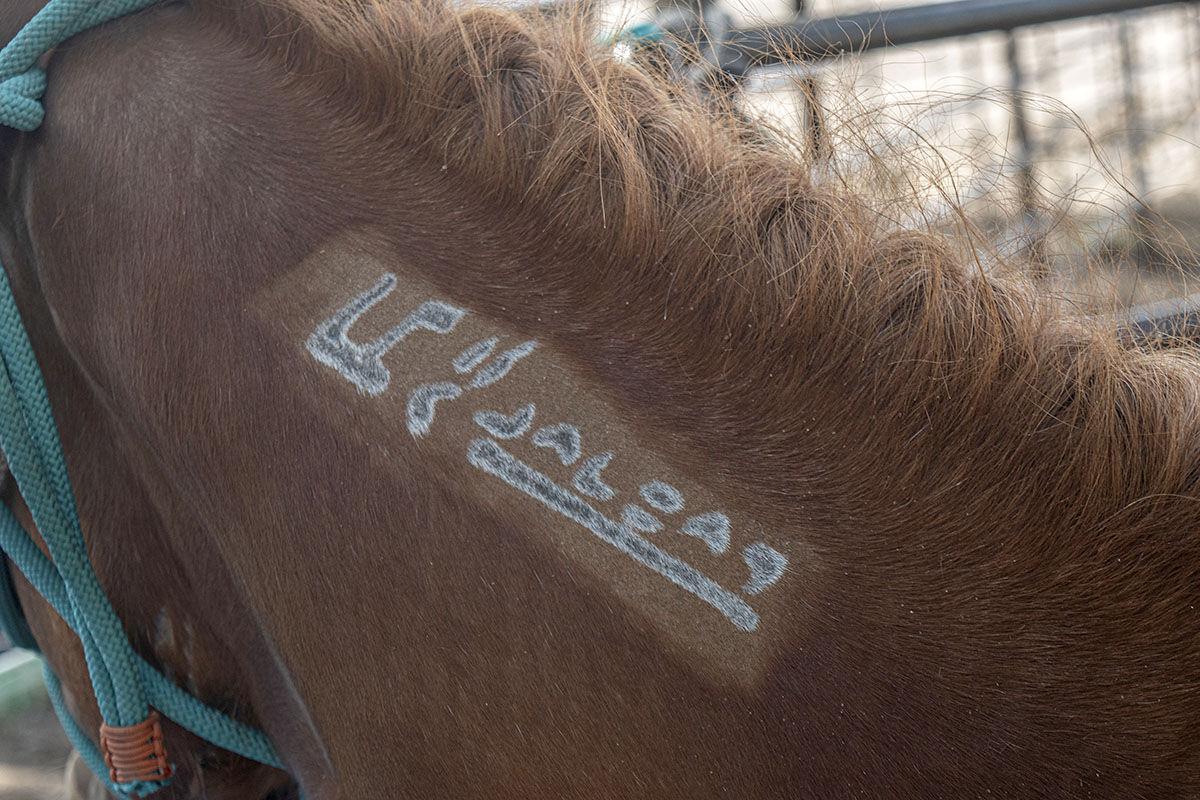 Every captured mustang from US ranges wears a coded brand. The code tells what country they are from, estimated date of birth, and the animal’s unique registration number. The code is called an angle code and is very difficult to alter. The mark is freeze branded rather than using a hot iron. 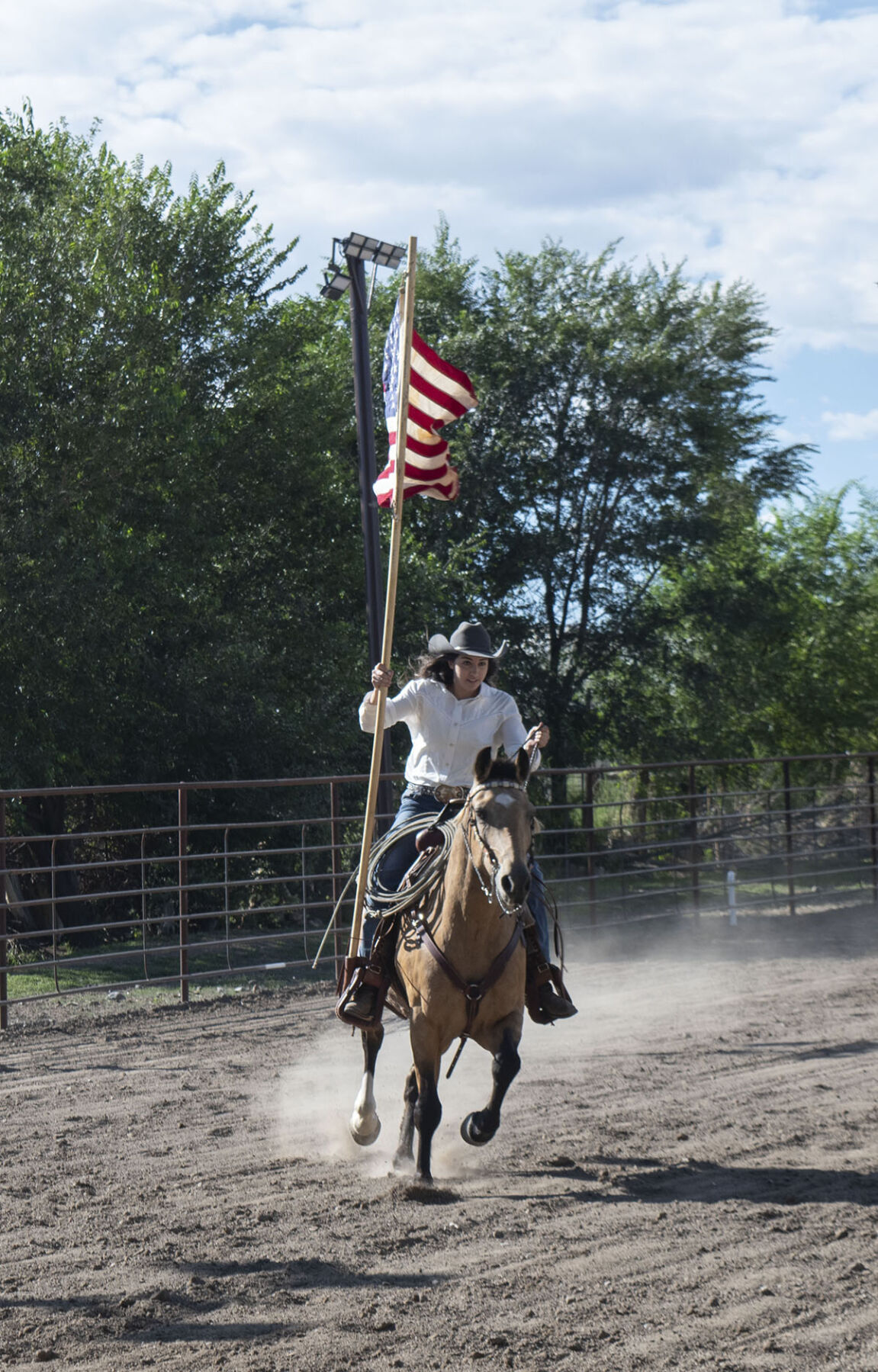 Caitlin Sanchez of Ridgway rides her mustang Whiskey to show America’s colors as the Mustang Milestone show gets underway last weekend at the Circle 3 Arena on West Lasalle. Thirty mustang horse and burro entrants were on hand for the day-long event.

Whiskey has a mustang brand on the left side of his neck, just below his mane. He came from the Little Bookcliffs area. At about 14 hands, he is a healthy-looking gelding. He is calm and Caitlin says that he is a good ride. There is a strong bond between the two. Last Saturday, they carried the Stars and Stripes into the arena, leading the grand entry for the 2020 Montrose Mustang Milestones Open Show.

At 20, Caitlin, who lives in Ridgway, is a seasoned mustang rider. She does all the events and loves barrels, although she admits that the aging Whiskey isn’t so good at barrels anymore. As they wait for the show producers to get things underway, Whiskey is the portrait of a patient partner. He enjoys a muzzle scratch or two and just hangs out.

Caitlin says that people are drawn to her mount. She says people come up and talk to her about him. Some will pet him … right up until they see the brand on his neck.

"'Ohhh, he’s a mustang,' they say, and they back away,” Caitlin said. She said that a lot of people have a misconception about mustangs, thinking of them as all wild and crazy. Caitlin and other mustang riders will say that is not true. Another contestant said that at worst they might be a one-person horse, responding best to the person who cares for them regularly.

In fact, the very existence of several of the events in the Mustang Milestones Open Show disproves that myth. The 100 day long one-on-one training by the rider under the 4-H Wild to Mild program also testifies to the fact that Mustangs can be a reliable ride, according to Aimee Collins. Collins, along with Diana Shipley, Jo Oatman, and several others, put on the event this past week. The horses are not saddle-trained in those first 100 days.

“We had over 30 entries for the show,” said Collins.

The show, for many of the 4-H kids, marks the end of what is called the Trainer Incentive Program (TIP). The program was developed by the Mustang Heritage Foundation (MHF). According to the foundation, the program “Bridges the gap between potential adopters/purchasers and American Mustangs housed at the Bureau of Land Management (BLM) off-range facilities. The MHF is looking for talented trainers who employ natural horsemanship techniques to gentle American Mustangs.”

“The kids (and some adults) are given a completely untouched horse (from the BLM) and they have 100 days to work with them before the show,” Collins said.

The horses must learn to be led by halter, obey commands, jump over a small obstacle and other requirements.

The Milestone show also gives horses that have been under training or have been ridden — some for years, like Miss Sanchez’s Whiskey — a chance to continue competing.

The show ran from mid-morning on into the evening and included pattern programs, jumping, barrels, and specialty displays. Another Milestone competition will be held in mid-September in Ridgway.

Collins said that so far, the TIP Programs have removed more than 100 mustangs from the range and moved them to new homes, where in many cases they join riders new to horsemanship.

Every mustang captured by the BLM roundups gets a brand it will carry for life. It denotes them as a captured “wild horse” or “wild mustang.” It means that the animal was, at one time, one of the nearly 100,000 feral horses that live free on Bureau of Land Management ranges. The still-growing herd is both a source of joy and beauty and a curse.

The problem is the range lands they inhabit, mostly in Colorado, Nevada, Wyoming, and Utah, are under pressure to provide grazing for the growing number of horses, natural wildlife and the permitted sheep or cattle.

The management, no matter how necessary, is often not a pretty thing. There are people who, though they understand the problem, love the wild horses. Those who do often become foster owners of these banded animals. Others train and ride them in shows and competitions such as the Western Slope Mustang Milestone series. Still others just give them a good forever home. Some become working stock horses on ranches and farms.

Colorado’s most well-known mustang herd is in the Sand Wash Basin. The basin, a huge BLM tract, is about 15 miles north of old Highway 40, in Moffat County. The nearest settlement is Maybell and the basin is about 50 miles west of Craig. The Horse Management Area (HMA) is just over 157,000 acres with all but 1,900 acres being public lands. The horses share the Sand Wash Basin with deer, antelope, sage-grouse, coyotes, cattle and sheep. The basin could be considered overgrazed at any time, given the fact that it is a high desert and that it is part of Colorado’s severe drought map.

The mustang adopters know full well that their efforts will do little to stave off the inevitable when it comes to controlling the growth of the horse herd. But, they attend as many of the BLM sales events as they can afford.

If you’re new to the horse world, buying a horse is not like buying a goldfish. Just to get into the BLM sale requires an application that proves you to be a good mustang caregiver. That includes having a place to keep the horse, which must have protection from the elements, plenty of available water, feed and veterinary services. Fences are required that will keep the stock in place.

POLL: How do you plan to celebrate Thanksgiving this year?