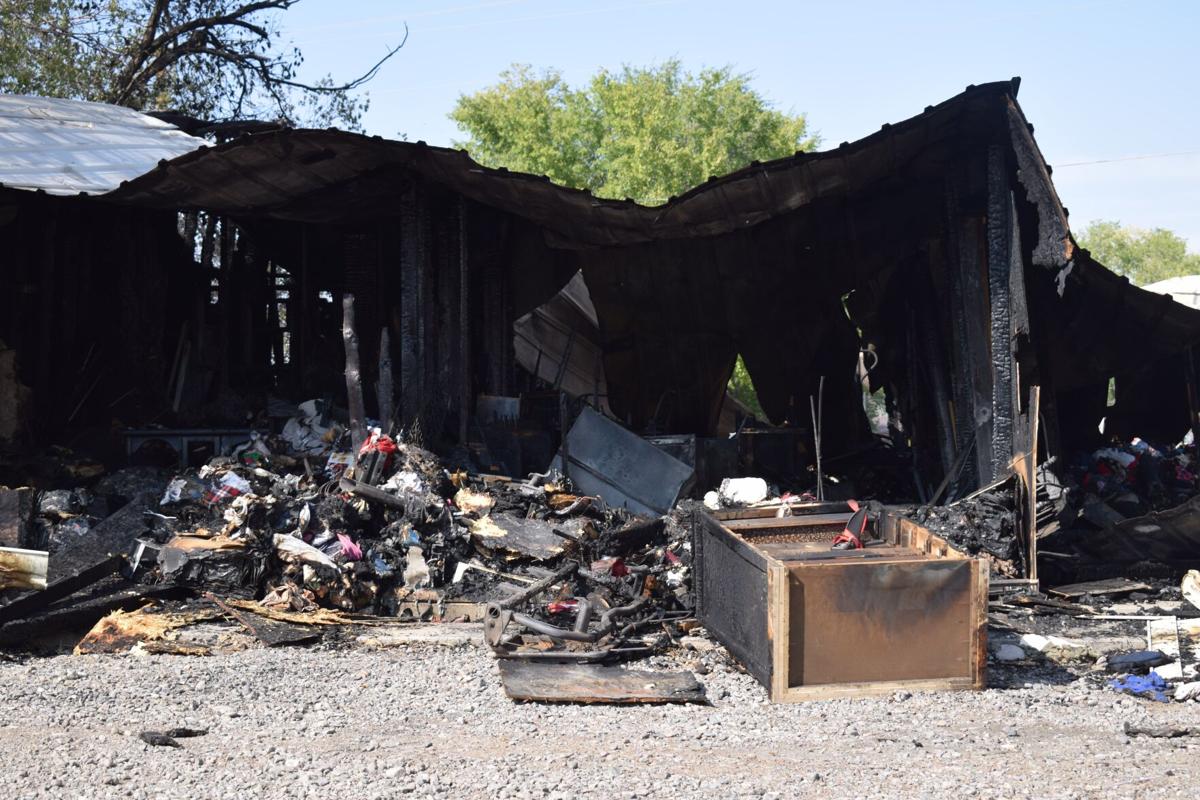 The blackened husk of a storage unit at Olathe Mini Storage Monday shows the damage from a late-Friday blaze. 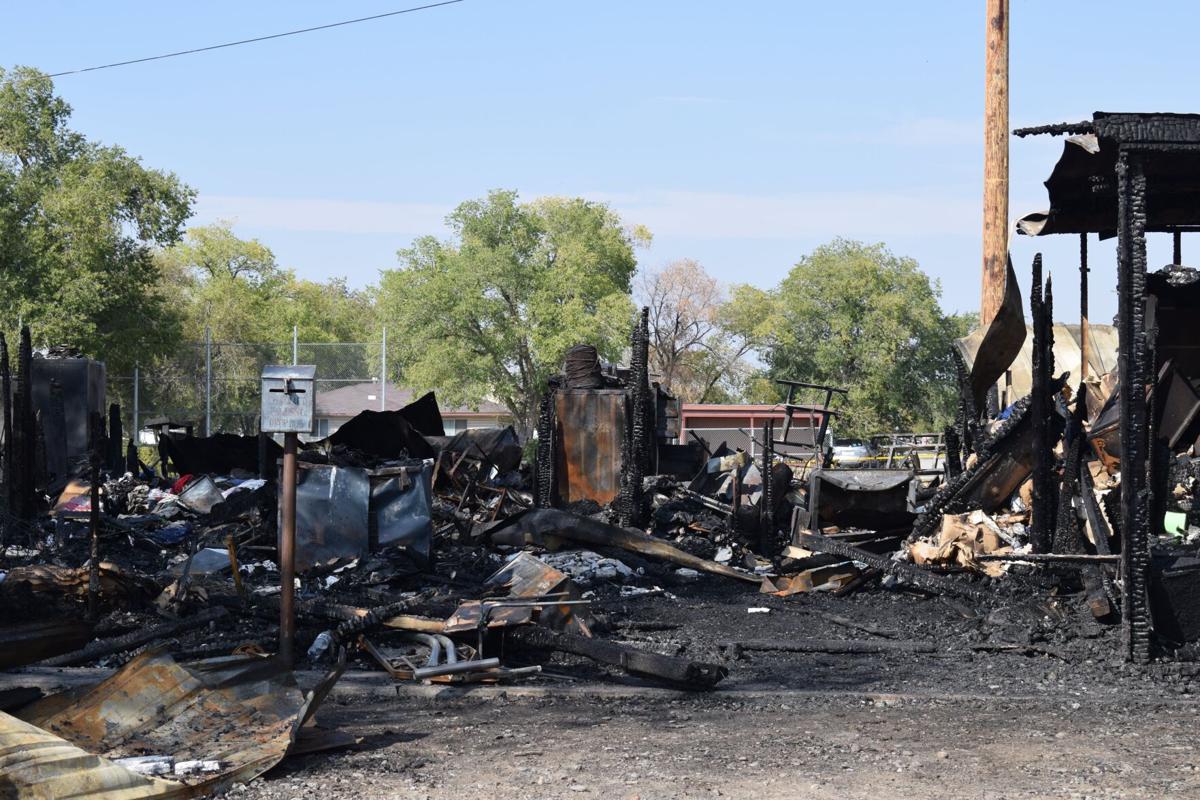 A metal lock box stands amid the burned-out remnants of Olathe Mini Storage, after a Friday night fire. 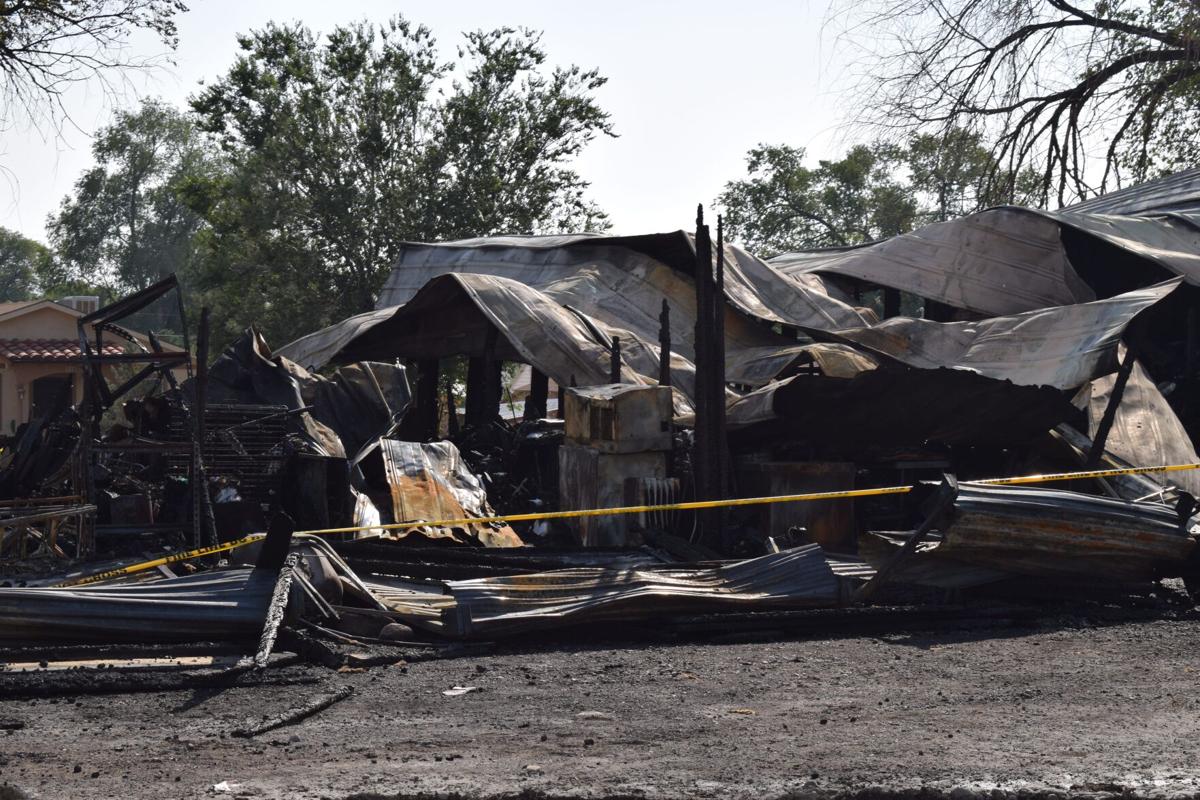 The damage at Olathe Mini Storage, shown from the rear of the fire-ravaged facility. 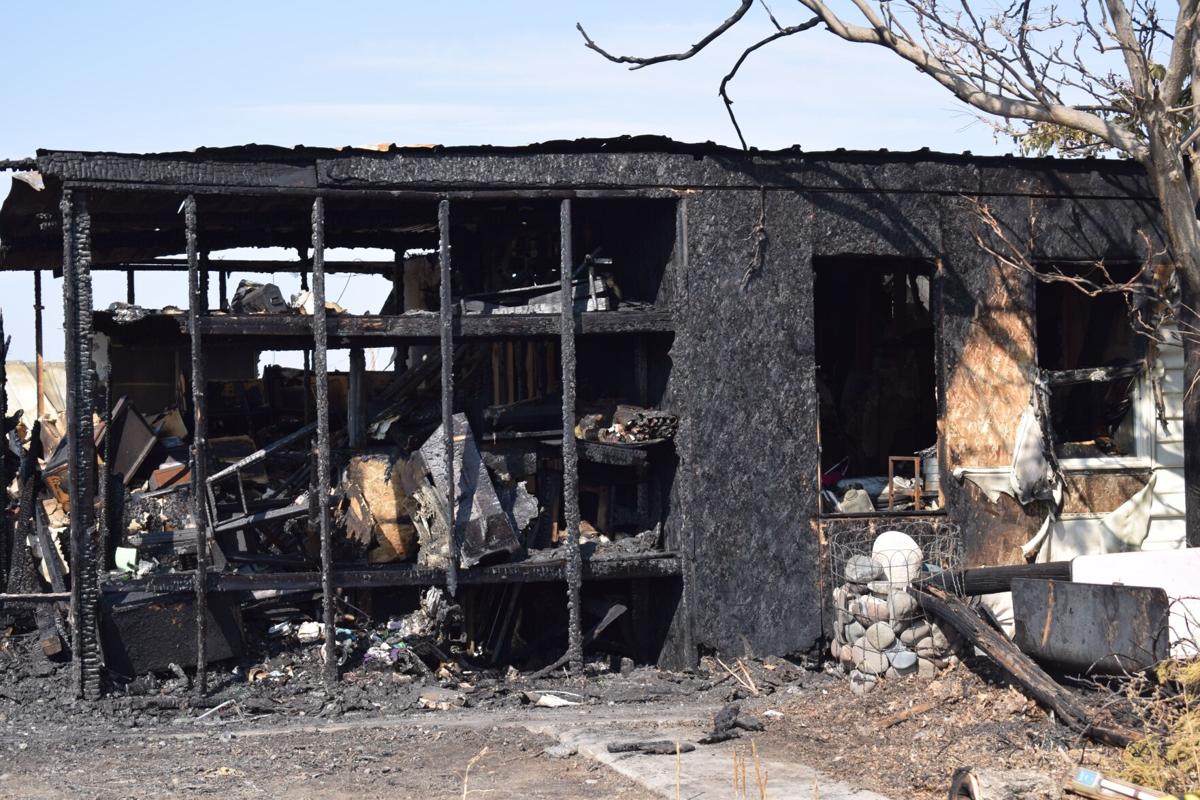 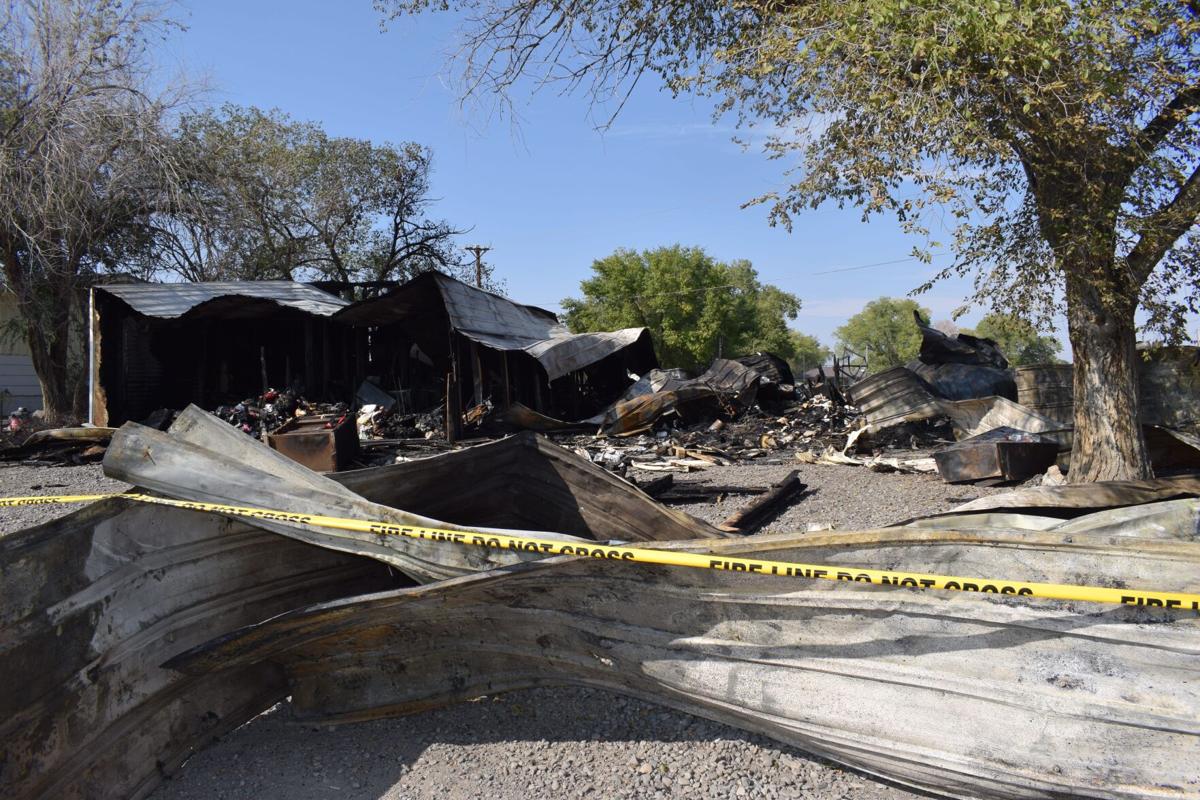 Warped metal and burnt buildings from behind caution tape on Monday at Olathe Mini Storage.

The blackened husk of a storage unit at Olathe Mini Storage Monday shows the damage from a late-Friday blaze.

A metal lock box stands amid the burned-out remnants of Olathe Mini Storage, after a Friday night fire.

The damage at Olathe Mini Storage, shown from the rear of the fire-ravaged facility.

Warped metal and burnt buildings from behind caution tape on Monday at Olathe Mini Storage.

Bobbie Guerra spent six years building Angels for the Needy, a ministry that helps supply a local winter shelter, and aids other charitable causes. In 20 minutes, she watched it burn.

“Everything I worked for is smoking ashes,” Guerra said Monday. Her ministry was one of three to suffer significant losses when a fire broke out at Olathe Mini Storage late Friday.

The wood and metal structure was deemed a total loss; fire officials said what little survived of contents sustained smoke damage. Looking at the blackened, melted remnants plainly shows how unlikely anything is to be salvaged.

Guerra can’t help but see that, either. “It’s right outside my house, so I have to look at that 24 hours a day,” she said, voice breaking.

“It’s overall heartbreaking. I’ve been building my ministry for six years and it was gone in 20 minutes. … The sad thing was, I wasn’t the only ministry.”

Haven House Transitional Living Center in Olathe lost the contents of two units, which had stored the new and nearly new items donated for a children’s Christmas shopping spree, as well as equipment and furniture donated for the early childhood program the ministry is developing. A third unit, which stored things such as yard sale items, was not as heavily damaged.

The fire also gutted supplies stored for Open Hands, Open Hearts, including critical winter clothing and gifts that had been donated all year for needy children.

“Our nonprofit lost everything and my husband lost 80% of inventory for his (second-hand shop) business,” Open Hands, Open Hearts’ Rebecca Marker said. “It was a double whammy.”

She and her husband had just returned from Grand Junction early Saturday morning, from collecting their daughter. A friend came running with the news; the Markers raced to the storage facility on South Fifth Street in Olathe, just blocks from the Olathe Fire Department building.

“It was really hard, especially since our stuff wouldn’t go out. It kept flaming up,” Marker said.

In addition to lost supplies, equipment and gifts, a power outage associated with the fire took out Haven House’s commercial freezer and its contents spoiled.

“The principal things we lost are items that had been earmarked for our Shepherd’s Shopping Spree,” Larry Fredericksen said Monday.

The annual spree enables the children who stay at Haven House as their families transition from homelessness to purchase Christmas gifts for themselves or their families. The children earn tokens throughout the year by performing chores or through good conduct, which are exchanged for the donated items. Additionally, past Haven House graduates are invited to participate.

“That’s a big thing. That was lost. We have to start all over in collecting merchandise for that, to see if we can still round up enough to make it worthwhile,” Larry said.

Haven House is undergoing its licensure process to have an early childhood development program. It had collected specific equipment and furnishings from other such programs to use in a donated modular building adjacent to Haven House on North River Road. While waiting for certification, Haven House stored those donations in its Olathe Mini Storage units.

It will all have to be replaced now, either through fresh donations or budget reserves, and Haven House must also pay a $2,000 deductible for whatever insurance coverage it might in the end receive.

Guerra said she had been unable to insure Angels for the Needy contents because of insurance rules, while Marker said she is busy securing insurance for the contents of Open Hands, Open Hearts’ storage units at another facility.

Those units hold her late mother’s property, which is safe.

“I’m thanking God for that, because that probably would have been my breaking point,” Marker said.

Battle to save nearby home

Olathe Fire Chief Matt Patrone said the fire’s cause is under investigation, as the volunteer department tries to cover all bases. The point of origin had not been determined, but based on what crews saw when they arrived at 11:34 p.m. Friday, Oct. 2, it was possibly in the center of the units.

“The center section was pretty well fully involved by the time we got on scene,” Patrone said. “We went into a defensive attack to protect structures.”

With engines, hose lines and mutual aid from Montrose and Delta fire protection districts, crews got control of the fire and worked particularly on keeping the home next door to the units safe.

The home was only 10 to 15 feet away from the flames, Patrone said. He put two different two-man crews on the front and the back of the fire, along with hose lines.

The fire was brought under control by 2:30 a.m. Saturday, with mop-up operations continuing until about 6 that morning.

“It still has some hot spots and smoldering we’re dealing with here and there,” Patrone said.

“I’m very grateful for both Delta and Montrose. Montrose helped us with our primary attack on the front side, as well as a little structure protection. Delta helped us keep that east side of the building protected. I have a huge thank you to both departments,” Patrone said.

Guerra said she is grateful the home was spared.

“The thing I’m most glad for is the people who live at the end of the storage unit. By the grace of God, it did not jump from that tree to the house and burn that house down. That would have been beyond devastating,” she said.

“That quick and it (unit) was gone. But it missed that tree, by the grace of God.”

Haven House, Open Hands and Angels are accepting various types of donations to help restore what was lost. Guerra, the Fredericksens and Marker expressed gratitude for the outpouring of support they’ve been receiving in wake of the fire.

For Haven House, the need for quality donations that can be Christmas gifts is keen, with the holiday only about two months away.

By coincidence, Haven House is also this week’s beneficiary of Trailhead Clinics’ “Thirsty Thursday” lemonade stand. From 3 — 5 p.m. Thursday, people can make a donation and receive a glass of lemonade at 401 S. Park Ave.

The weekend fire is a setback for Haven House, said Larry, but, the nonprofit has learned to “roll with the punches,” thanks in part to the community.

“We are concerned about how it might affect the Shepherd’s Shopping Spree and we will have to spend money out of reserves for the early childhood program, which we hadn’t planned on,” he said.

“ … The community is calling to offer help. There’s a few good things that’s come out of it.”

Larry Fredericksen said Altrusa of Montrose has pledged to replace some of the spree items and the Center for Mental Health has reached out to start enrichment and counseling programs at Haven House.

“Some positive things happened out of this disaster,” Fredericksen said.

Open Hands needs artificial trees that it can set up across the community for the giving trees it sponsors each year to assure needy kids have a merry Christmas. Open Hands further needs coats, gloves and winter supplies of all sizes. To donate winter supplies, contact Marker at 970-274-6436. She is also arranging for drop-off sites.

Angels for the Needy helps supply the Lighthouse overnight, winter emergency shelter in Montrose with hygiene items, bedding, towels and other items. Those needs are critical, as the shelter is preparing to open Nov. 1.

Guerra said the Angels ministry lost a substantial donation of brand-new toys intended as Christmas gifts for children. Dotties Dames Pinup Girls had donated about $3,000 worth of toys, all of which were destroyed.

Guerra also helps other people in need, offering clothing, diapers, school supplies and food that she distributes from her home, with the help of Shepherd’s Hand in Montrose. Because of the COVID-19 pandemic, Guerra had been delivering food boxes to the elderly.

Guerra is establishing locations where people can drop off donations; so far, she has arranged to set up boxes at the Olathe Family Dollar store and Looney Bean coffee in Montrose.

A friend of hers set up a Venmo donation link (www.venmo.com/Bobbie/Guerraangels) and the Olathe branch of Bank of Colorado will put out a collection jar, Guerra said.

Despite her own losses, Guerra is determined to donate 10% of cash received to the family of a Grand Junction 3-year-old whose body was found Sunday in a canal.

The Mesa County Sheriff’s Office said the child, at this point identified only as Adelesia, or “Addie Rae,” had wandered off early Saturday evening. Her family immediately searched for her and called 911; searchers later made the grim discovery.

“It might be just a little. That’s my way of still working with the other (charities). That’s the whole point of doing these things, is helping each other out,” Guerra said.

Marker also has the tragic loss on her mind. Although she needs donations of winter clothing, Christmas gifts and trees, and she will eventually need cash contributions, for now, she is holding off on seeking monetary donations.

“That’s a loss that’s not replaceable,” Marker said. “We live in an amazing community. We’re privileged to live in that community. Our things are replaceable. That little girl’s life isn’t and that family is going to need our help for months to come.”

“It’s hard. But our nonprofit is based on helping others. God has always come through and provided what we need when we’ve needed it,” Marker said, reiterating the child’s death was a bigger loss.

“I know donations are coming in from all over, but until you’ve lost somebody, the financial expenses and being out of work, it seems like that goes on and on. This family is going to be having a really bad hardship in coming months,” she said.

“If I can raise money, so much the better. It’s not going to bring this little girl back, but it will help the family be off work for a little before they get thrown into life again. … Keep Addie’s family in your prayers.”

Guerra remains faithful of recovering from the fire.

“I know unequivocally that the devil is a liar and my God is stronger,” she said.