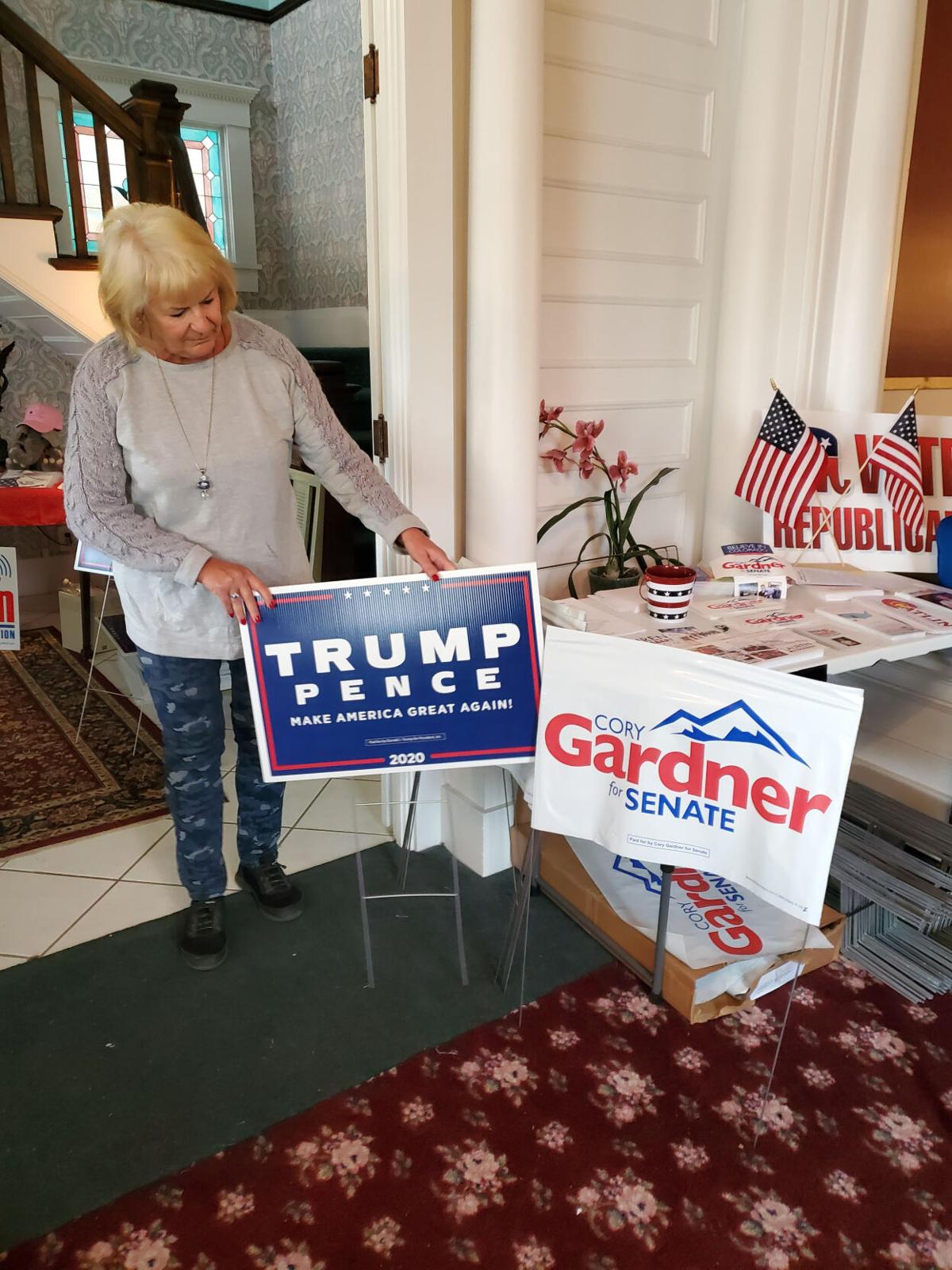 Linda George positions Trump-Pence and Cory Gardner campaign signs available at the Montrose County Republican Party headquarters on Wednesday, Sept. 9. With the local Democrats, the county GOP is calling for an end to ongoing vandalism of campaign materials displayed by private citizens. 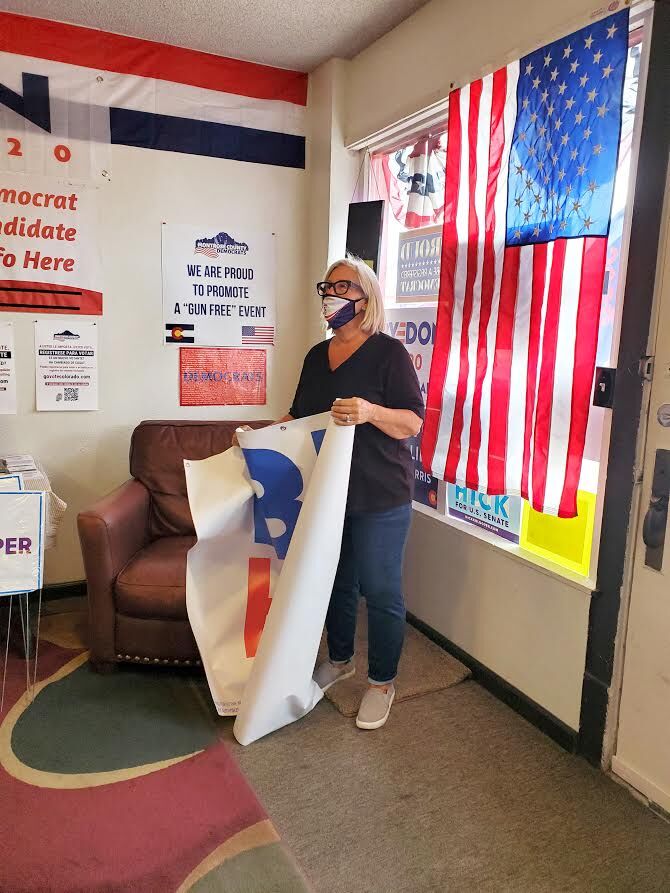 Jayne Bilberry unfurls a Biden-Harris banner at the Montrose County Democratic Party headquarters on Wednesday, Sept. 9. With the Republicans, the local Democrats are calling for an end to ongoing vandalism of campaign materials displayed by private citizens.

Linda George positions Trump-Pence and Cory Gardner campaign signs available at the Montrose County Republican Party headquarters on Wednesday, Sept. 9. With the local Democrats, the county GOP is calling for an end to ongoing vandalism of campaign materials displayed by private citizens.

Jayne Bilberry unfurls a Biden-Harris banner at the Montrose County Democratic Party headquarters on Wednesday, Sept. 9. With the Republicans, the local Democrats are calling for an end to ongoing vandalism of campaign materials displayed by private citizens.

The large sign rested on private property east of town, visible from the highway, declaring the owners’ support for presidential candidate Joe Biden. Within a few days of being erected, it was destroyed and its replacement didn’t fare much better, despite having been placed behind the fenceline.

His counterpart with the Montrose County GOP, Ray Langston, also decried ongoing damage to people’s political displays, as well as last week’s damage to the local Republican headquarters — someone fired paintballs against the exterior of the historic Lathrop House, where the party has set up shop this election.

“We do not condone that on either side,” Langston said. “I know (the Montrose Democratic Party) doesn’t condone it, either. We’re all entitled to support whatever candidate we choose and other people need to respect that.”

Montrose resident Bob Nicholson said he suspects “kids” damaged the Biden flag he had rigged up with PVC piping outside of his home. Someone bent the PVC pipe and pulled the pole over; Nicholson replaced the set-up with a wooden pole, set in concrete, and moved it further back onto his property.

“I think of all the signs we’ve had and that’s the only time I’ve had vandalism. It’s kind of depressing,” he said, adding he is dismayed to see vandalism hit people in both parties.

“I hate to think of Democrats or Democratic supporters yanking Republican stuff out. I guess we have people in both parties that are not as kind and considerate as they could be,” Nicholson said.

As for the damage on his own property, “it wasn’t the end of the world,” he added.

Kuns said the Democratic headquarters at Main Street and Townsend Avenue has also seen some petty vandalism — someone smeared burritos or a similar food over the windows and someone else tried to mark up a sign, although that was covered with Plexiglas.

“It’s got to stop,” he said, referring to the damage being done to both parties’ signs and property, as well as the damage to citizens’ signs.

“I have no desire to walk through my neighborhood and pull down the Trump signs. It’s sad. … The volume has been turned up in the past 3.5 years, where people are just comfortable (trespassing),” Kuns added.

Kuns and Langston themselves have had political signs stolen from their property, each man reported.

Langston said individuals have also been reporting theft of signs and flags, which cost money and some of the larger signs are pricey. In Mesa County, one of the bigger signs was cut into pieces, he said.

“I haven’t heard of that happening here. The issue I’ve heard of here is just people stealing signs,” Langston said.

The damage can’t be attributed to just one side or the other, Langston also said. “It’s not people within the party. It is individuals who are behaving in a negative manner.”

Like Kuns, he said people’s political expression is protected as free speech.

“For people to take it (a sign) down is basically to take somebody’s voice in this election,” Langston said.

“It’s not who we are and it should not be who anybody is,” Kuns said.

“I hate to hear about it from anybody,” Nicholson said. “It’s unfortunate people are picking up signs and damaging stuff. It’s just not necessary.”

Depending on the circumstances, a person who takes signs or other campaign material from someone else without permission can be cited for theft.

State Sen. Don Coram said he’s been hearing about the ongoing damage from both sides. “We need to put respect back into our politics,” he said.

Kuns, for his part, offered a direct message to those damaging or stealing signs and displays: Just stop it.