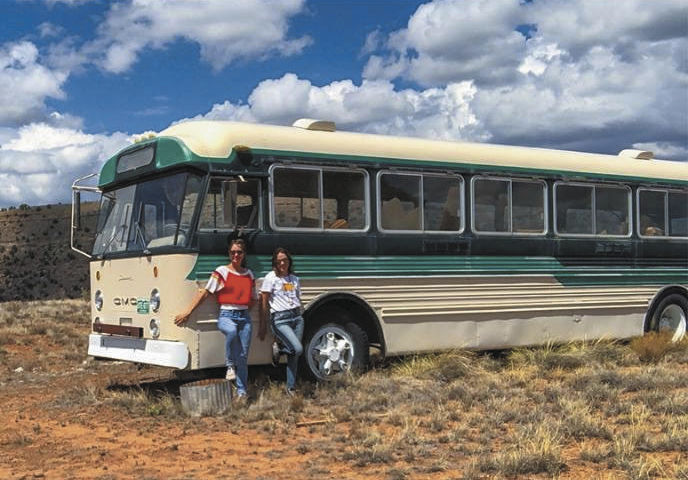 Tina Whatcott, left, stands with Natalie Binder in front of a bus Binder and her business partners are converting to serve as the office and manager quarters for Camp V.

Tina Whatcott, left, stands with Natalie Binder in front of a bus Binder and her business partners are converting to serve as the office and manager quarters for Camp V.

Natalie Binder is coming home — and bringing something new to help inject life into the West End economy.

Binder, who has spent nearly two decades in the luxury hospitality industry, is with her business partners, architect Jodie Wright and husband Bruce Wright, bringing upscale camping to Naturita. The trio recently received a special use permit from Montrose County, clearing the way to open “Camp V” at the old Vancorum site, west of Naturita along Colorado 141 and the San Miguel River.

“Both sides of my family lived in the Naturita area. I’ve been coming to the area my entire life,” Binder said Wednesday, in detailing how Camp V came to be.

She heard many stories about the West End’s mining days, its one-time drive-in movie theater, and other amenities during uranium and vanadium’s heyday.

The Vancorum site came on the market a few years ago and Binder purchased it from a family who, she said, wanted to be sure the new owner would put it to good use.

“(Wright) and I had been looking for something unique to do. This deserves to be transformed,” Binder said.

“It’s become something bigger than just a project. We want to do something for the community. It’s me coming back to my roots, coming back and telling a different story.”

Initially, Camp V will offer five fully furnished “glamping” safari tents, to be built on wooden platforms, with solar lights and electricity outlets for small devices and lighting. The site can accommodate five to 10 more such tents.

The permit application also details plans for two tensile tents — a hammock-tent combo — with the possibility of adding two to five more; 10 spaces for camping vans and one 2019 Airstream Sport.

None of these will be hooked up to water or sewage; instead, guests will use a shower and restroom facility that is being constructed inside an old water tank/silo structure.

Camp V will use a professional contractor to pump out the blackwater.

Camp V’s property also includes a pond, with water rights secured, where there can be dock access for kayaking and fishing.

A converted bus will furnish quarters for an onsite manager, who during busy months, will stay overnight.

The area is zoned as general agriculture, but the special uses sought do not conflict with the land use under the county’s master plan, a county planning department document recommending approval states.

Camp V’s backers have to obtain an access permit from the Colorado Department of Transportation and adhere to an added condition to address anticipated high water levels, after planning staff raised concerns.

Additional conditions include adding at least one handicapped accessible parking space adjacent to the office/bus and all structures that require a building permit — including the bus — must have smoke detectors, as must the glamping tents.

If and when a proposed “fun island” area is developed on the west side of the river, bathroom facilities must be provided.

As well, Camp V drew the support of the towns of Nucla and Naturita, plus the West End Economic Development Corp., all of which wrote to the planning commission prior to county commissioners giving final approval.

“The synergy of our town is changing from a once bustling uranium mining town, to a boom with the oil and gas industry, to our Tri-State power plant and New Horizon coal mine closing down,” a March letter signed by Naturita Mayor John D. Riley and the town trustees states.

“Tourism will more than likely be our next economic driver. The special use permit application by Camp V is a positive step in the right direction for discovering Naturita.”

The Town of Nucla also weighed in, in a February letter calling Camp V’s plans “in direct alignment with the outdoor recreation and tourism plan developed for the West End of Montrose County.”

Binder said she sees opportunity, first and foremost in job creation and drawing people to the area, but also because there are not restrictive design guidelines, so artists and architects will have a chance to do something “out of the box.”

“We look at this as something of a blank canvas, but something Montrose County can be proud of,” Binder said.

She’s drawing on her experience in the luxury accommodations business and strong outdoors connection. Camp V is a way to introduce people to camping, but in a more interesting way — and it doesn’t hurt that the glamping market is growing, Binder said.

The project is raising capital as initial groundwork takes place. It could get off the ground by fall, or, if not, by next spring.

“We’re looking forward to getting this on the ground and inviting the community to come to a different part of Montrose County and explore part of their backyard.”