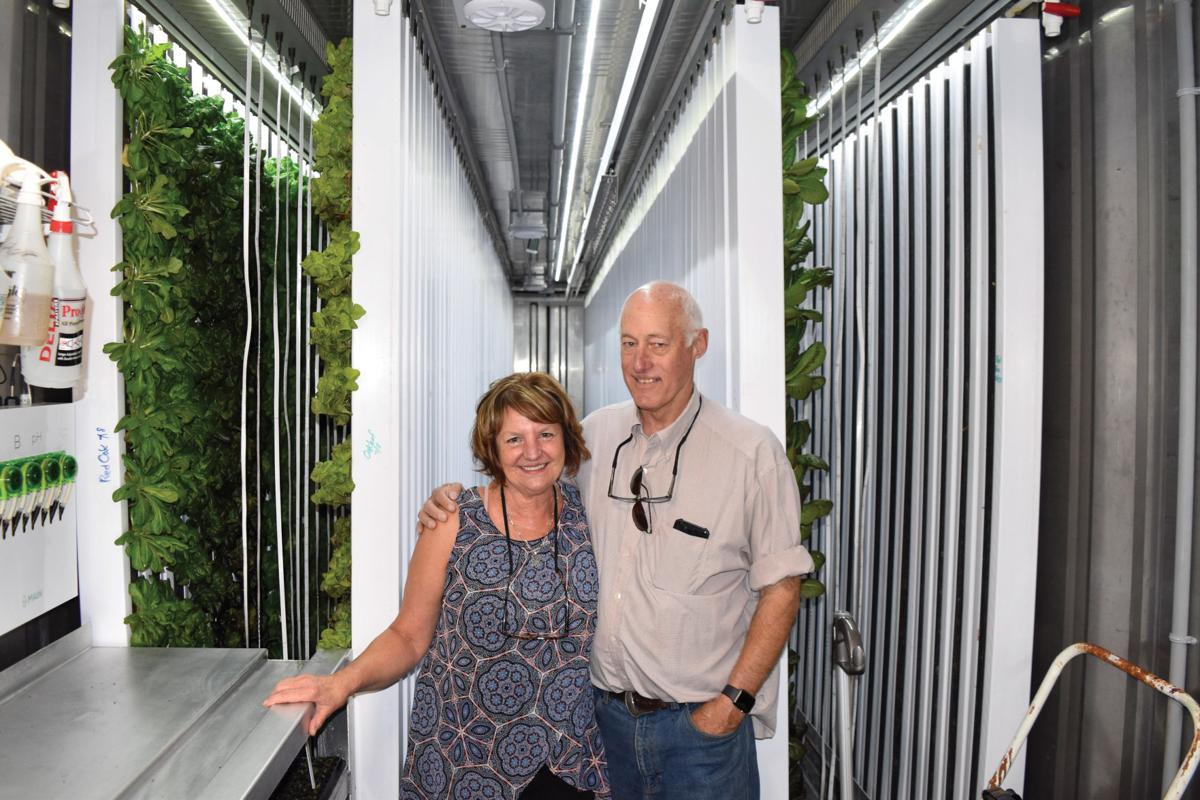 Soozie and Steve Arnold pose with part of their hydroponic Garden at the Eatin’ Greens farm. The system they use is considered precision farming. 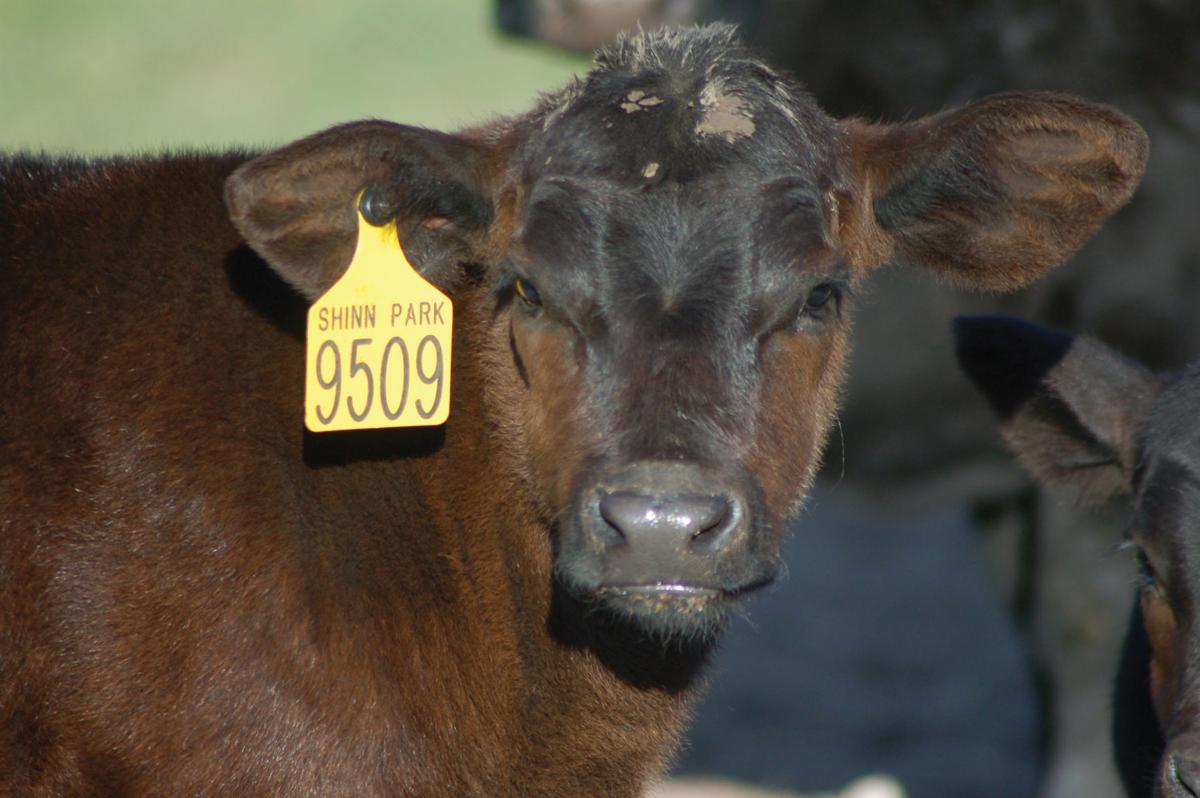 A Shinn Park Ranch Angus calf sports his mandatory ear tag. Ear tags are evolving into a valuable aid to ranching with the advent of Radio Frequency capabilities. 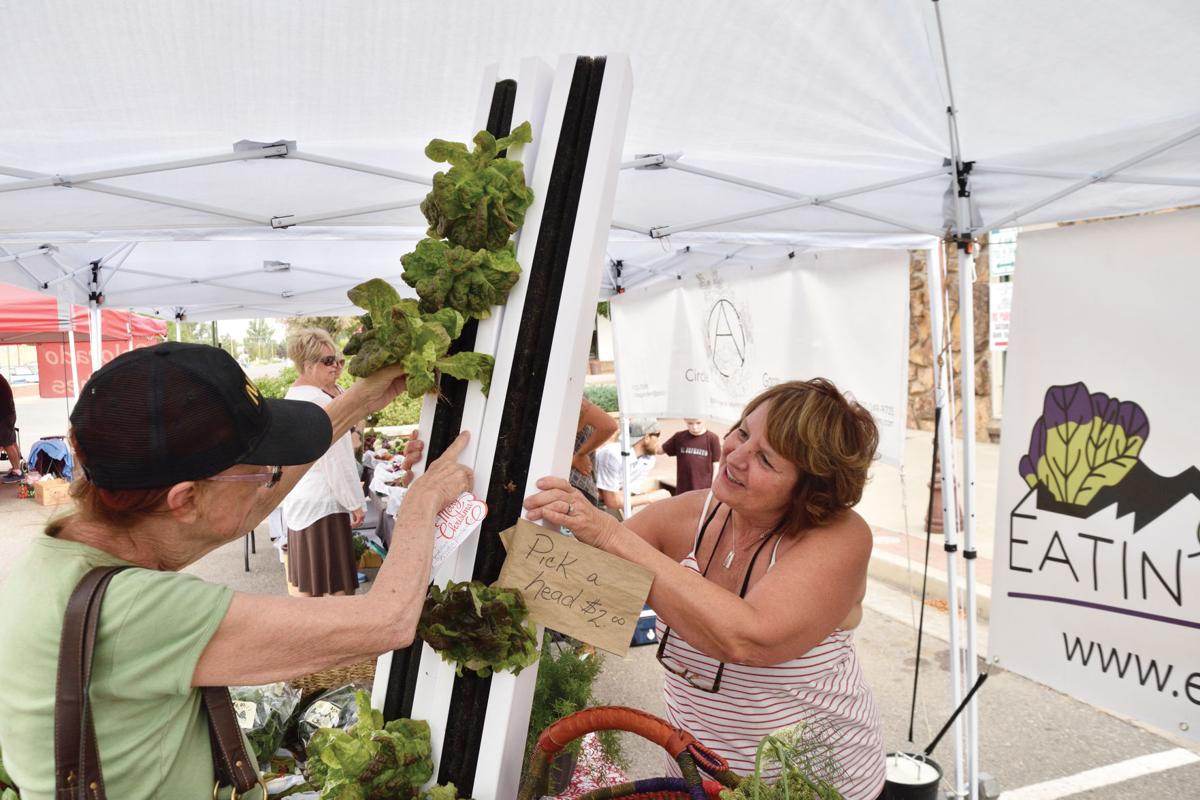 Soozie Arnold helps a Farmers Market customer “pick” her own greens from their hydroponic “farm field.”

Soozie and Steve Arnold pose with part of their hydroponic Garden at the Eatin’ Greens farm. The system they use is considered precision farming.

A Shinn Park Ranch Angus calf sports his mandatory ear tag. Ear tags are evolving into a valuable aid to ranching with the advent of Radio Frequency capabilities.

Soozie Arnold helps a Farmers Market customer “pick” her own greens from their hydroponic “farm field.”

Steve and Soozie Arnold used to run cattle on 30,000 acres in the San Juans. Now, they grow butter lettuce and other delicious greens on three acres just north of Spring Creek Road near Montrose.

They do it hydroponically. Steve can irrigate his crops from his smart phone. Soozie sells greens and things at the farmers' markets, Gold's Gym, several restaurants, and to other customers, taking plastic payment and processing it with The Square on her phone. She counts the beans on QuickBooks. Steve reads the Wall Street Journal online, which is where he found out about the growing system they use.

Without the internet, broadband or otherwise, life would not be the same for small and large ag operations alike. The Arnolds are part of the precision farming movement. It’s farming and ranching with much less guess work and fewer surprises. Growers with a few acres, like the Arnolds, and cattle outfits, like the one Steve used to run, are getting more yield, using less water and taking fewer chances because they have the internet and tools like phoning in your irrigation.

When the refrigerator replaced the root cellar and the icebox back in the 1930s, everything from the way farmers finished crops to the way consumers bought them changed for the better. That came about when the Rural Electrification Act set the stage for energy being delivered to rural farms and ranches.

“A similar shift is upon us with the advent of digital technology and next generation precision agriculture, resulting in increasing productivity with fewer inputs, better market access and healthier rural communities,” said Megan Nelson of the American Farm Bureau Federation.

Nelson is all about pushing the idea of broadband for everybody. But what is broadband?

The dictionary definition is, “A high-capacity transmission technique using a wide range of frequencies, which enables a large number of messages to be communicated simultaneously.” In terms more of us can understand, it's like having a digital party line where everyone can talk at once and still get the message straight. In the unseen operations, the data — words, pictures, numbers, etc. — move at light speed in computer-assigned packets. The problem is the network that does this magic is not in place everywhere.

“Just recently the Federal Communications Commission admitted that the maps they have are wrong,” Nelson said, “We really donít know who has broadband available and who doesn’t.”

The FCC has promised to get the maps up-to-date as quickly as possible. In bureau speak that could be next year or the third June of 2021.

Meanwhile, the discussion is about what broadband or a better Internet connection could do for the ag business. For small farmers like the Arnolds, it is a requirement. It was one in the list of requirements before they purchased their hydroponic package from Freight Farms in Boston, Massachusetts. They needed a water, power, Internet, and the land to put it on.

The Arnolds get their internet service from Spring Creek Cable, a local firm that provides fiber based broadband service to much of Montrose and Ouray Counties, as well as other parts of Colorado. Other broadband providers include DEMA’s Elevate, Spectrum (cable), Century Link, Viasat, and wireless providers like Elite, Mountain Broadband and TDS. With the push by phone networks to cover the country in 5G networks which have excellent data transmission capabilities, virtually everyone in Colorado has access to data, although it is a bit expensive.

On the Western Slope a network connection can mean greater productivity, better marketing and that third hand that holds a flashlight while you fix a truck, having learned how to do it from a YouTube video.

“There is almost nothing that I can’t fix by watching YouTube videos,” said Ryan Murray of Yurtstead Farm. Murray and his partner, Jenn Mueller, farm ten acres in an off grid location near Coal Creek in the west Montrose Valley. The couple make their Internet connection the wireless way. The energy comes from solar panels.

The Internet is a major link to new information that Ryan and Jenn need to stay ahead of the curve in their “beyond organics” farming methods. Their PayPal account is used for payment processing when they market their meat and crops.

Could they get along without the internet connection? “I would rather not,” said Ryan.

“Tracking cows and their condition is a huge step that has positive effects on both the cattle and the range land,” says the Farm Bureau’s Nelson.

Now, the yellow tags came before broadband, but since it is here, broadband in the sparsely populated landscape of Western Colorado means keeping track of livestock just got a whole lot easier.

Ear tag identification is now required for any livestock that is to be sold. There are plain ear tags with a number and, usually, the name of the owner. The tag may or may not contain a scanner-readable chip. They are what is called RFID chips, which contain a radio frequency device. These can send a signal to a central or mobile location, where GPS and other data can be collected.

A GPS signal from an RFID chip, if nothing else, can tell the rancher where the cow is on an outfit that might consist of 50 sections (square miles) of the earth’s surface. Suddenly, the need for cowboys to spend weeks looking for cattle to round up gets cut to days. And, believe it or not, there are still cattle rustlers lurking about, and ear tags or implants that broadcast a signal read by a broadband receiver puts the bad guys on the defensive.

The RFID tags are an expense of operation, but the benefits far outweigh their cost. Most of them are available for about $2 and do not need batteries. They last for the life of the animal. There is an Australian company developing a smart tag, which essentially puts a phone to every cows ear. Delivering vital signs, location, weather conditions, weight and other data the ear tag does for the ranch what a space suit does for NASA.

Connection to broadband for a cattle outfit is also the best single source of information regarding the market, weather, and other data.

According to the USDA’s research the livestock industry is “poised to benefit the most from next generation precision ag.” The USDA report touting broadband for everyone in rural American is full of ìbillionsî in potential benefits. The majority of the benefits for the dairy and livestock husbandry sector should be realized from increased efficiency in animal care, reduced medication requirements, shorter finishing time, and loss of individual animals to theft and death.

The projected benefits to the ag sector of more precision farming and data-based operations look encouraging. According to Nelson, “All potential benefits are estimations based on rigorous research; however, producers must perform their own cost-benefit analysis to see where these emerging technologies fit in their operations,” says Nelson.

A few decades ago a Senator named Everett Dirksen, appearing on the Tonight Show with Johnny Carson, said, “A billion here, a billion there, pretty soon you’re talking about real money.” In reading the AFBF and USDA reports there are projected to about $65 billion in potential benefits to the Ag sector. But, given that there may be some hyperbole involved here, even if they’re only 50 percent correct, maybe a little time spent on learning more about the benefits of precision, data-driven farming might just be worth it.

Michael A. Cox is a Montrose-based content provider. He may be reached at mcox@burrocreekpictures.com