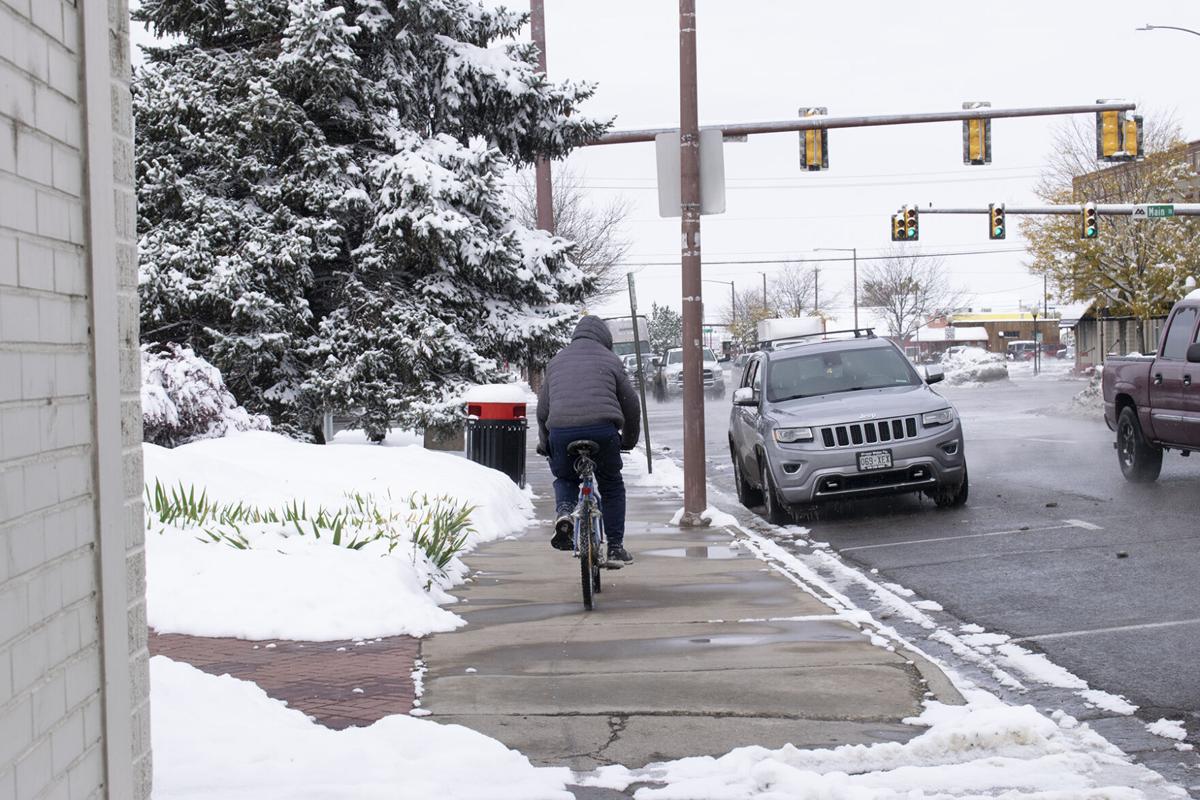 A man on a bicycle makes his way toward the intersection of Main and Townsend Monday after a storm dumped snow on Montrose. 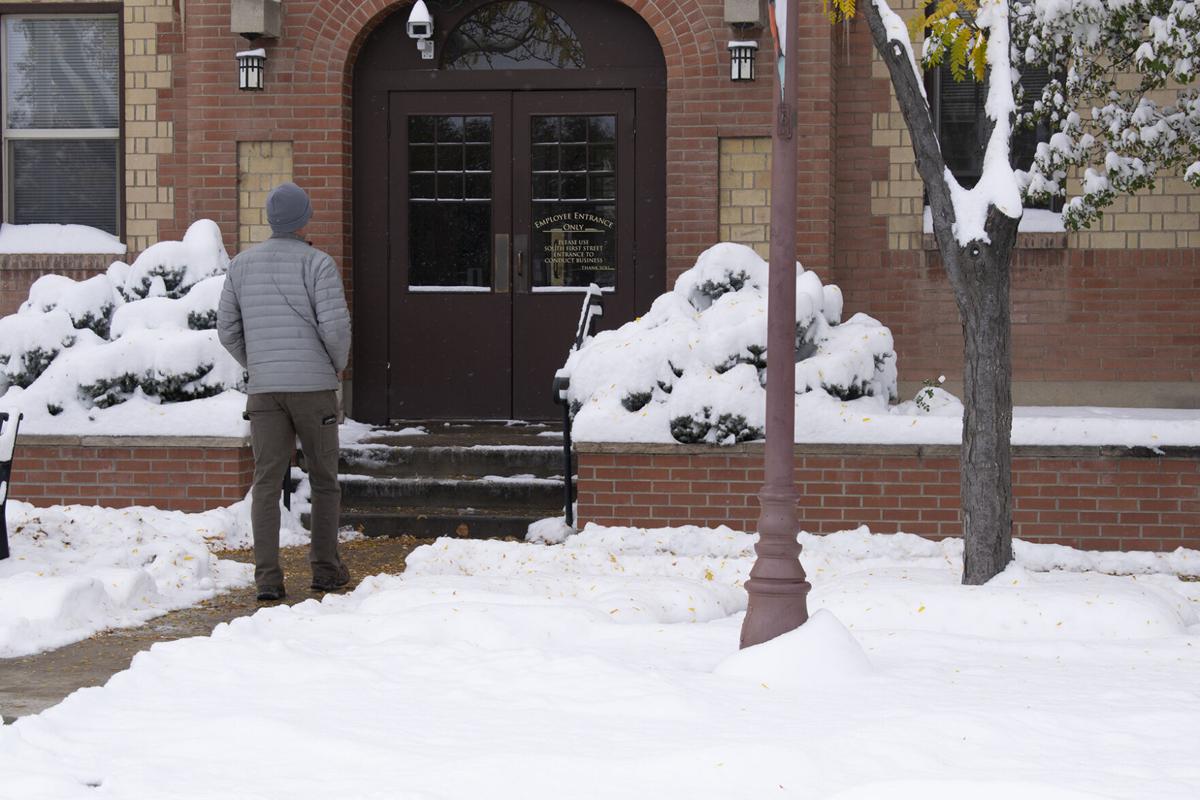 A man walks up to the steps of Montrose City Hall Monday after a snowstorm hit in late October. The city has announced office closures in observance of Veterans Day. 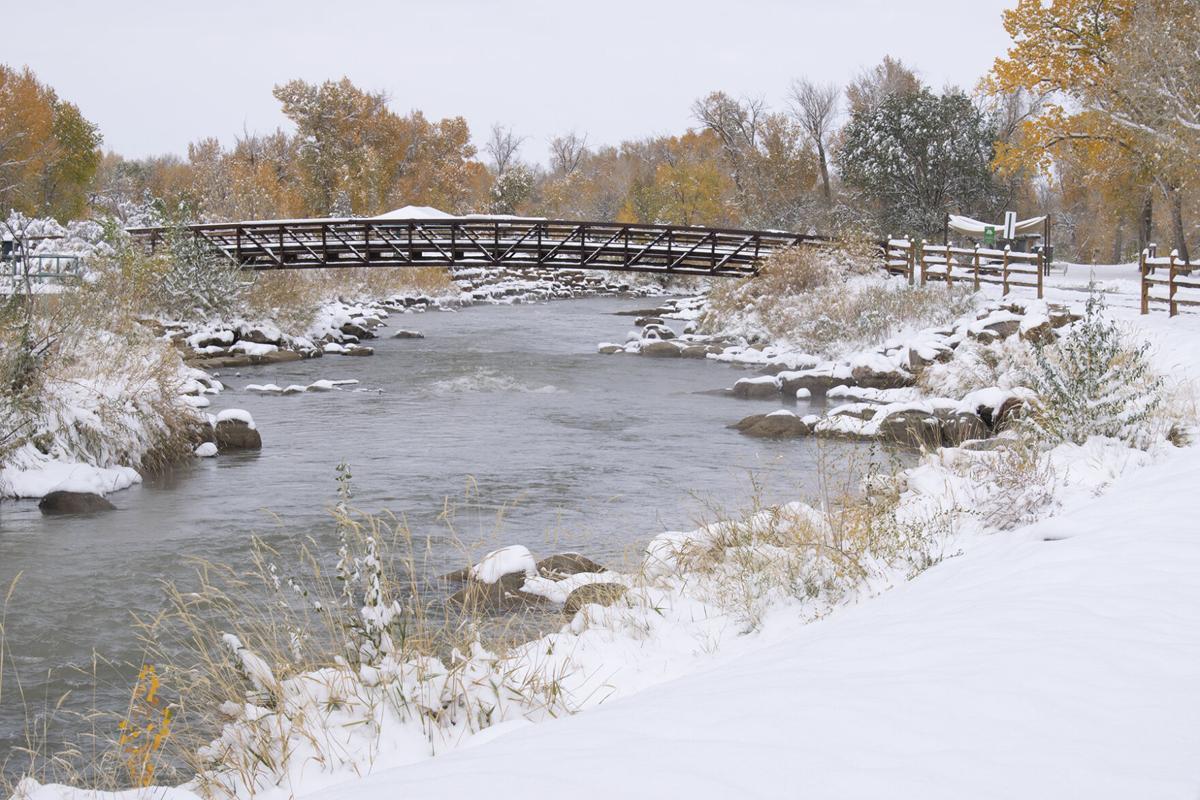 Riverbottom Park is covered with a blanket of snow Monday.

A man on a bicycle makes his way toward the intersection of Main and Townsend Monday after a storm dumped snow on Montrose.

A man walks up to the steps of Montrose City Hall Monday after a snowstorm hit in late October. The city has announced office closures in observance of Veterans Day.

Riverbottom Park is covered with a blanket of snow Monday.

The blast of snow that dumped 10 or more inches in some parts of town between Sunday and Monday, closing roads and schools, won’t lift the state out of drought, but it did make October one for the record books.

Sunday’s storm put the area near normal for precipitation for this time of year, and took it above precip for October of last year.

“But we are still in extreme drought. Any precipitation we get is helpful, but it’s not taking us out of the drought,” Walter said.

Snow totals were still being compiled at last report, but Montrose showed a general range of between 6 to 10 inches, with the higher amounts along the slopes of the Uncompahgre Plateau, although some in-town homes informally reported more than 10 inches.

Sunday, a strong cold front and pressure system swung across the state, dumping badly needed moisture on wildfires and bringing what Walter called a “decent amount” of snow overall.

“The unusual part was how warm it was in front of it and then temperatures dropped, the transition from rain to snow being very sudden in some locations, making for treacherous roads Sunday night,” she said.

U.S. 50 was closed for about four hours Sunday night from G Road to Delta because of poor visibility and conditions.

Multiple vehicles slid off the road and the Colorado State Patrol reported several minor crashes, along with motorist assists. The CSP was on accident alert — prioritizing response to crashes with injuries or road blockage and instructing others to exchange information — until 9 a.m. Monday.

East on U.S. 50, the chain law was in effect for Cerro Summit and Monarch Pass.

“It was quite the storm. It came in fast,” CSP Capt. James Saunders of Troop 5C said. “But they were predicting it for a while, so we had that heads up.”

Saunders put as many troopers on duty as he could to be able to handle all the calls.

The road conditions, along with power outages and drifting snow, led Montrose County School District to call off classes for the day Monday.

Saunders reminded motorists of basic winter driving: slow down during icy or inclement weather; make sure tires are in good shape with ample tread; use windshield wiper fluid that is designed for low temperatures and top off all fluids.

The snow is also blamed for about two dozen power outages throughout the Delta-Montrose Electric Association service territory. These began in the wee hours of Monday morning, ranging from about 30 minutes to a few hours’ duration. The outages affected just over 3,000 DMEA members in Montrose and Delta counties, DMEA spokeswoman Becky Mashburn said.

Although the storm played havoc with roads, power and schools across the state, Saunders said the moisture was needed.

In Montrose, the snow lingered until early afternoon as the skies cleared and the day warmed up.

“The downfall is it means our low temperatures (Tuesday) will be very frigid. In Montrose, we are looking at a low of 6 degrees,” Walter said.

The extended forecast indicates it will be dry until mid-November.

Statewide, the snowstorm help put a chill on wildfires, although it was not enough to extinguish the devastating East Troublesome Fire burning since Oct. 14. Between 6 inches and a foot of snow, with a temperature drop into the single digits stopped fire activity in lighter fuels, although larger fuel sources continue to smolder.

“The snow has slowed fire activity, but is not expected to be enough to put the fire out,” an update on the Inciweb fire information site reads.

The East Troublesome Fire has burned more than 192,000 acres and was 15% contained Monday.

The Cameron Peak Fire, which has burned more than 200,000 acres, was 64% contained, with snow and cold also helping slow the blaze — although, with a drying trend on the way, fire activity may increase again, per Inciweb.

Closer to home, the Ice Fire near Silverton has been 90% contained after burning almost 600 acres.

Locally, the snow allowed the Grand Mesa, Uncompahgre and Gunnison National Forests to transition out of fire restrictions. Despite this, visitors are urged to continue being cautious and practice fire-smart behavior, such as never leaving a campfire unattended, making sure all campfires are fully out and cold to the touch before leaving and using established fire rings.

Developed recreation sites that had been opened because of the previous Stage 1 fire restrictions are now closed because of heavy snowfall on the GMUG. Visit https://tinyurl.com/gmugcamp to be redirected to the GMUG’s campgrounds page.

Fire restrictions may remain in effect on other public lands; visit WestSlopeFireInfo.com.