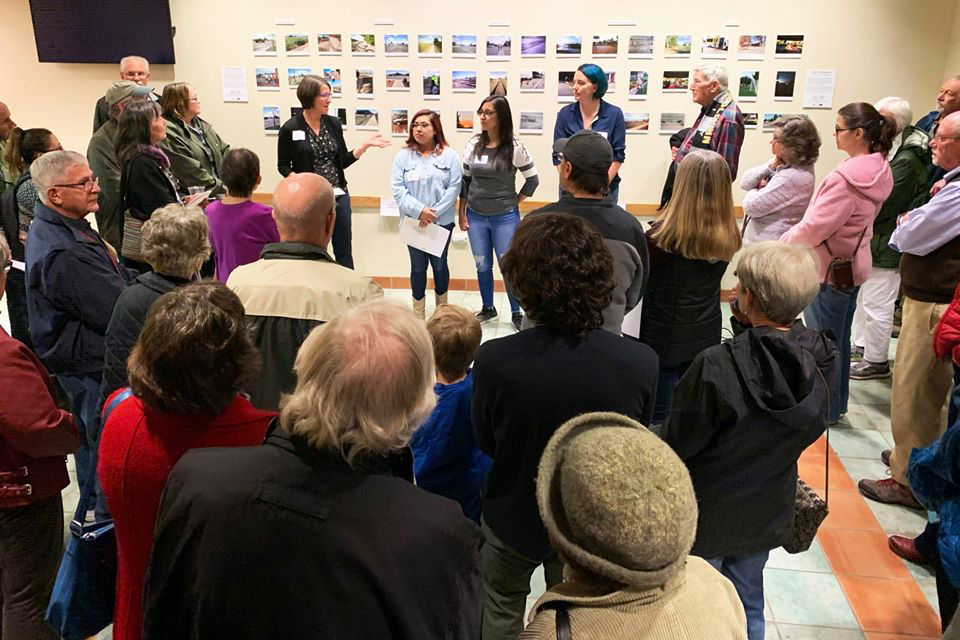 Photovoice photographers and supporters discuss the exhibit during a reception at the library Wednesday. 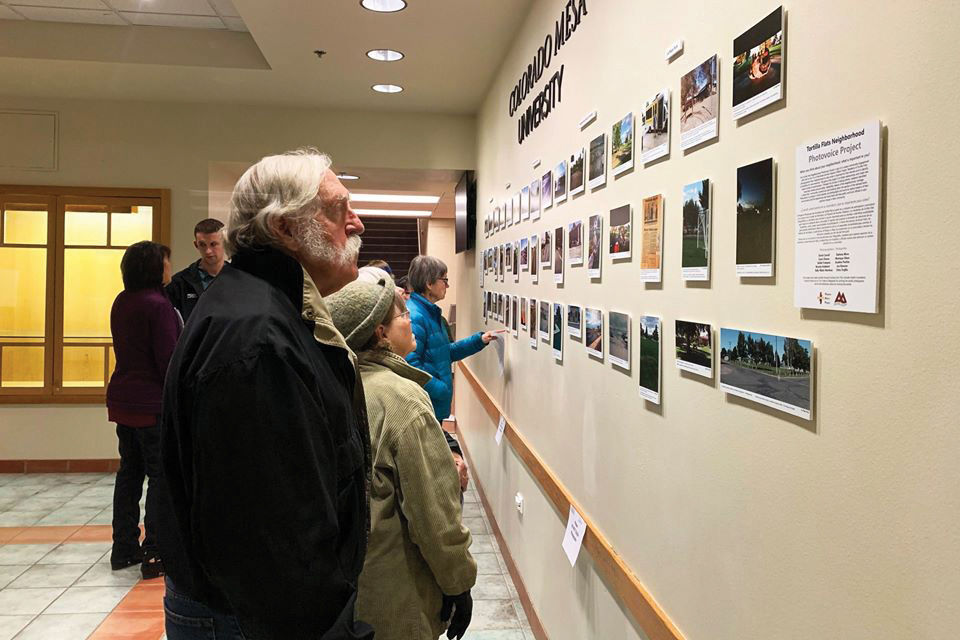 Photovoice photographers and supporters discuss the exhibit during a reception at the library Wednesday.

When Chris Trujillo looks at the northern Montrose neighborhood residents call Tortilla Flats, he sees challenges, but also a wealth of history and community.

Wednesday evening, others were able to catch a glimpse of that community through his eyes, and the eyes of other neighbors who were part of the Tortilla Flats Photovoice Project, which spotlights the realities of the neighborhood.

“I figured there were some problems that needed to be fixed, especially now with Montrose growing,” Trujillo said during a reception at the Montrose Regional Library, where the Photovoice exhibit will hang for the month. “Part of the problems we were coming up with was the lack of mobility from one area to the other.”

Children from the neighborhood attend elementary at Northside — across four lanes of busy traffic on Townsend Avenue where, Photovoice participant Monique Olson said, few people bother to slow down, even when the school zone signal is flashing.

Trujillo said crossing signal lights are not long enough for children to get across the road and that seniors living at the Anciano Tower Apartments for seniors have the same problem.

He and others Wednesday pointed to the railroad tracks running through the neighborhood near North Fourth Street, saying they have fallen into disrepair.

“Who’s tried walking across Townsend lately? That’s one of our main concerns, the safety and walkability for our kids,” Photovoice participant Austine Purdue said.

Participant Sally-Marie Martinez elicited laughs when she asked who has driven over the railroad tracks lately.

“With the tracks being in our neighborhood, we felt it was a barrier, not only for us, but for others maybe thinking ‘That’s the wrong side of the tracks,’ or us feeling that people perceive it that way,” Martinez said.

The photography project grew out of the City of Montrose’s initial discussions with northern Montrose neighborhoods. The Hispanic Affairs Project and other nonprofits working with the city in 2018 on the Connect for Trails Project wanted to engage residents who would be most affected by the new walking trail, particularly those on the north side, in Tortilla Flats.

“What became clear is there are a lot of other issues that they were interested in talking about, not just the project the city was focused on,” Karen Sherman-Perez, civic engagement coordinator for the Hispanic Affairs Project, said.

A broader venue was needed to air those concerns and for the city to hear what residents think is important. The city used grant funding from the Colorado Health Foundation, which in addition to providing $25,000 for the Connect Trail Project, also provided money for engagement efforts, particularly in Tortilla Flats, the city’s grant writer, Kendall Cramer later said.

“The city really has an interest in making sure we serve all of the people in our community and in understanding their needs. … We were able to use the Connect Trail as an impetus or beginning of discussion, because there’s a lot of new development going on near that neighborhood and there’s a lot of concern associated with that,” Cramer said.

“So using the trail as a point of discussion and how that will benefit the neighborhood — and may cause some concerns — we were able to build a bigger discussion around the changes going on.”

This formed the genesis of the Tortilla Flats Neighborhood Photovoice Project, the outcome of which Cramer praised.

“It’s one of the oldest areas of Montrose,” Trujillo said.

“The lack of funding by the city of Montrose during the years and lack of maintenance on things they had there had already gone to pot. We were trying to figure out how to get the city back into that neighborhood.”

The project used photos to address such broad topics as safety, breaking down barriers and community connections.

“The interesting thing about the Photovoice is, a lot of times, we just think, ‘Well, let’s just ask them that question and they can share their answers.’ But, I think, the project is an example that photos are very powerful,” Sherman-Perez said.

“Enter the neighborhood of Tortilla Flats and try to understand their lived experience. That’s really what Photovoice is all about.”

The photography by residents, for residents is also about pride in place, the participants said.

“I feel a lot of us are proud to live in and come from a neighborhood that not only has La Raza Park, but also Anciano Towers, which is a senior living center,” Martinez said.

“MADA is also located there, which stands for the Mexican American Development Association. That, with the park, was something the community came together to build for the community, which is kind of cool also.”

La Raza, now in city hands, was created 46 years ago through the work of the Tortilla Flats community.

Tortilla Flats enjoys a rich history, Trujillo said. The area was once home to a chapel his research indicated was established by Native Americans who had been enslaved in Mexico territory; that the old Spanish Trail ran in the area and it was also home to the oldest irrigation ditch in the Uncompahgre Valley.

“I found out that right at that area is where Dominguez and Escalante crossed the river in 1776,” Trujillo said, referring to the two famed friars Francisco Dominguez and Silvestre Escalante.

Trujillo had suggested the city consider using the history to promote tourism, although it established an urban renewal authority that led to Mayfly Outdoors purchasing a large swath of riverfront property and launching the Colorado Outdoors business park there. The city did install a marker, he said.

Olson looked at the Photovoice project as a way of honoring her late grandmother, Ida Mora.

“My grandma and my entire family pretty much grew up in the neighborhood. I spent my summers there, but I grew up in Denver,” Olson said.

“My grandma just recently passed away. She was a part of the meetings and doing stuff and I wanted to take over for her. I’m really proud of the neighborhood Tortilla Flats. We just want to get out there that there are some concerns we have.”

Olson and her cousin, Darlene Mora, worked together taking photos for the project, including ones showing the area of North Ninth Street where a roundabout now is. Improvements to streets, such as the extension of Grand Avenue, did not always extend into the neighborhood. “They made a sidewalk (for Grand Avenue) and it just ends,” Olson said.

The project is an important means of communication.

“It’s trying to get our neighborhoods noticed. It’s one of the oldest in Montrose and I’m proud of where my family was brought up,” Olson said.

“I am fortunate to see and witness the heritage and pride we all have in Tortilla Flats,” Purdue said. “It’s allowed me to learn more about my neighbors, get closer to them and understand more about the concerns and their pride of neighborhood, and deep roots and ties.”

Photovoice wasn’t only intended to identify means of improving the neighborhood, Sherman-Perez said. It is also about forging relationships.

“We’ve learned a lot about the cultural diversity and the history of the neighborhood. There’s so much there. I hope this is just the beginning of this project,” she said.

“ … There’s no guarantee that anything will change, but we’ve already had, just by the turnout tonight, a lot of interest, a lot of encouragement. We hope more folks will get involved and, together, we will come up with ideas of how we can enhances the neighborhood.”

Tortilla Flats might also ideally serve as a model for other neighborhoods, she said.

“The photos kind of speak for themselves,” said Olson. “I guess everyone kind of has a different point of view when they look at it. It means something different to every person.”