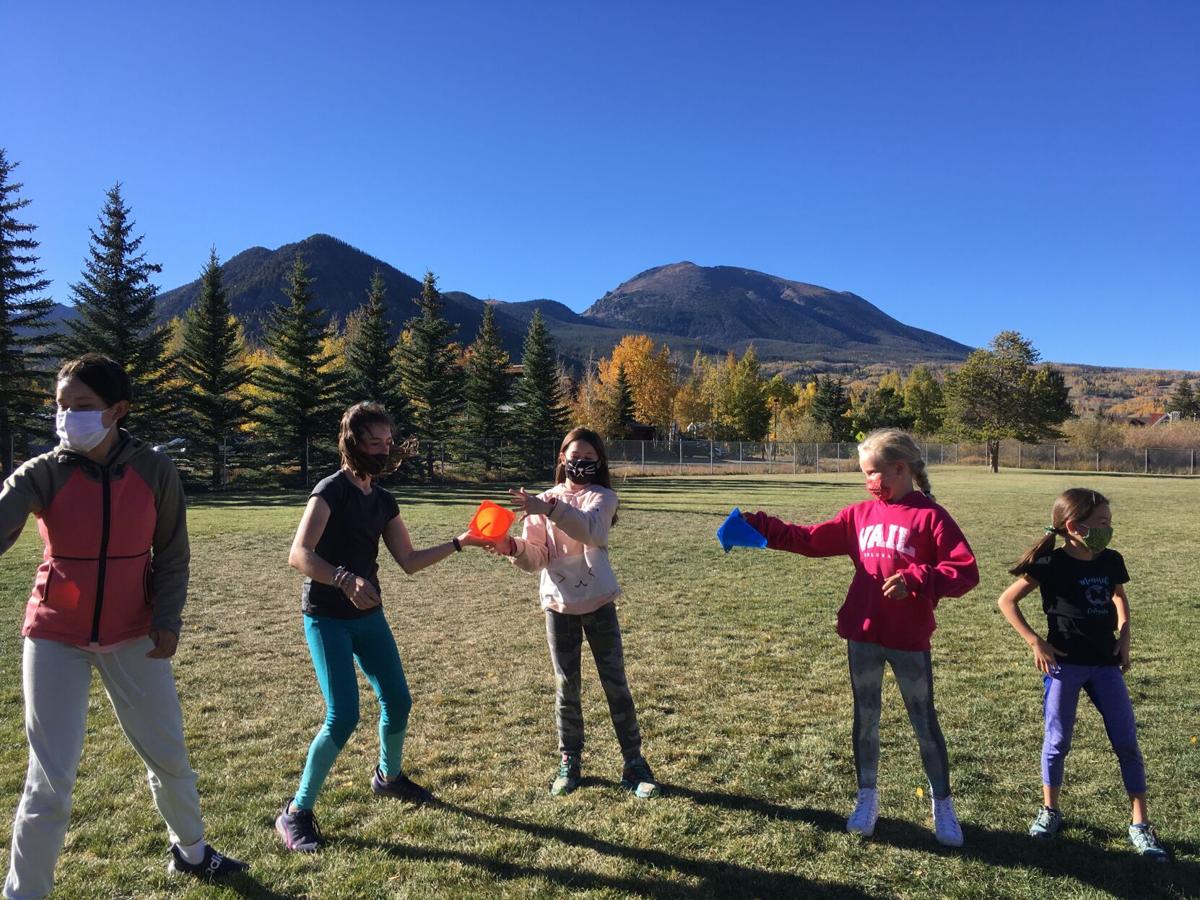 Girls on the Run participants, donning masks, engage in an activity during a recent practice. (Courtesy photo/Emily Moen Eastham) 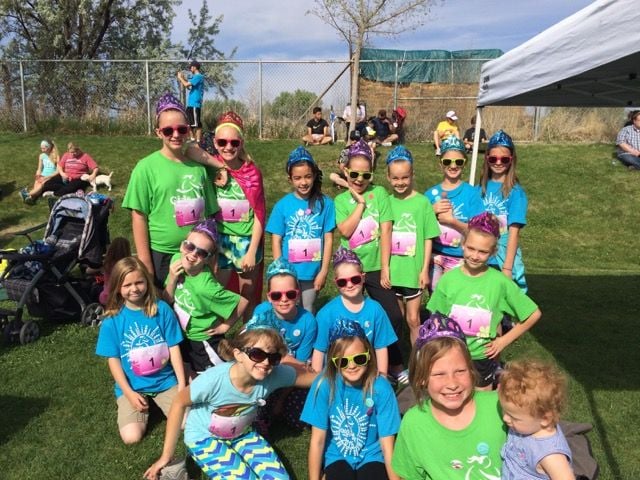 The Pomona Elementary Girls on the Run team poses for a group photo prior to running the seasonal 5K in Grand Junction in 2015.

Girls on the Run participants, donning masks, engage in an activity during a recent practice. (Courtesy photo/Emily Moen Eastham)

The Pomona Elementary Girls on the Run team poses for a group photo prior to running the seasonal 5K in Grand Junction in 2015.

Last week, hundreds of girls on the Western Slope should have gathered for a Girls on the Run 5K event, dressed in their bright pink shirts, featuring the white “Girls on the Run” logo. The girls would lace up their shoes, position themselves near one another at the starting line and bolt as they began the course with friends and family.

It’s a longstanding tradition for the Girls on the Run nonprofit organization, which aims to help girls learn critical life skills, provides physical activity programs and focuses on girl empowerment. The nonprofit serves several west Colorado counties, including Montrose, Delta, Grand Junction, Ouray, San Miguel and others, with the 5K’s acting as a key fundraiser that allows for further improvement of its events and programs.

But that’s not what happened last week. The girls were participating in a 5K — a virtual event — and one that featured fewer participants overall.

The virtual 5K was the nonprofit’s second of the year. Although the two have had some benefits, such as connecting girls from 30 different states, it’s been hard to replace the myriad of benefits the in-person events provide.

“We are currently down significantly in our programming and our in-person community events,” said Girls on the Run Executive Director Emily Moen Eastham, who added fall participation in the event was 20% of what an in-person participation list would bring.

The Girls on the Run 5K is just one of several fundraising events non-profit organizations have had to cancel or shift this year due to the effects of the COVID-19 pandemic. Limitations on social gatherings and the priority to keep people safe has made key in-person events for nonprofits unfeasible, creating an uncertain fall fundraising period.

“We were just talking about dates, and we may have to take a temporary pause for the winter season so we can reserve funds to allow us to open in the spring,” Moen Eastham said. “ ... currently, we’re just doing everything that we can to continue serving the girls.”

Losing the ability to host the event in-person severely slashed funds for Girls on the Run. Moen Eastham said the organization is down about two-thirds for annual funding because of the lack of in-person opportunities.

Though funding is down, the pandemic, in a way, is offering GOTR staff and participants a silver lining in how to handle adversity and life circumstances.

“Although it’s not our ideal situation, it’s a hard spot to be in,” she said. “But I can’t think of anything that would better exemplify what our mission is and how we can persevere through it. Teaching girls about experience, persevering, taking advantage of the opportunities that are given to them.”

Additional annual events were also canceled. The 2020 Wine and Food Festival (with proceeds benefiting the Black Canyon Boys and Girls Club) was canceled. About $100,000 was lost from the cancellation, but state grants helped weather some losses, executive director Bud Taylor said.

The situation was no different for Partners of Delta, Montrose and Ouray, a non-profit youth organization focused on building mentorships between children and caring adults. It had to cancel some fundraisers, including the upcoming chili bowl event. It’s left funds scarce, and directed in other areas.

“We saw a lot of our funds used for program or general operations get turned into COVID relief funding,” Partners Executive Director Curtis Hearst said.

Though the nonprofit is behind budget, the Partners online auction and Partners Golf Classic were a pair of fundraisers that worked out with strong feedback. And the rubber duck program, where people can donate a duck for a dollar, is starting to gain steam.

The Dolphin House Child Advocacy Center in Montrose had to cancel its participation in the Little River Band Concert, and later had to cancel the annual barn dance fundraiser. Proceeds from both events — around $12,000-$15,000 — benefit the nonprofit.

But those funds were wiped this year.

“We are fortunate because the organization has been run in a really fixable, responsible manner,” said Michelle Gottlieb, the center’s executive director. “We had some reserve funds to make up for the shortfall for these events.”

The center pivoted to a virtual 5K fundraiser, which went well, Gottlieb said, and received great feedback — in fact, it’s an event the nonprofit will revisit even without a pandemic limiting in-person showings.

The significant loss of funds has impacted local nonprofits, most noticeably the closure of the Black Canyon Boys and Girls Club operating site in Olathe. The number of individual and business donors is down for Dolphin House, though it was expected, Gottlieb said, as budgets have become tight for businesses and individuals during the pandemic.

But others, including Dolphin House and Girls on the Run, to name a few, have benefited as of late.

“We have had an outpouring of support from the community,” Gottlieb said. “We get calls for donations, blankets, and people reach out to see if we need donations of snacks for families.

Girls on the Run is serving about 9% of girls of which it normally would this fall. But the center has been able to host its after school program, and just finished the running season where girls would practice after school. Teams were smaller and it looked different, but the season was completed with no closures or cancellations.

“In the meantime, we have been relying on community support,” Moen Eastham said. “We’ve had great feedback, particularly from our volunteer network — 800 volunteers that really are the backbone behind our programming. They’ve been the best to get the word out there and garner that support.

“We have felt the community come together. They have stepped up tremendously. … I would say they have been integral in keeping our programming going.”

“Had we used that expense with less money coming in, it would have negatively impacted us,” Gottlieb said. “But because they offered that service, we were spared that, and that’s amazing.”

The number of volunteers are starting to increase for Partners, Hearst said, and its online auction in April had some of the best engagement in years. The rubber duck program, after a sighting at Montrose Memorial Hospital on Tuesday, has led to a pair of interested community members wondering how to get involved. (Call the center at 970-249-1116 to learn more about the program.)

Outlook for the rest of the year and beyond

As of late, the center has seen a 22% increase in the number of victims that come through the Dolphin House, Gottlieb said, and are serving more clients with less resources. Its winter months can be the busiest, but thanks to a dedicated staff, and a steady reserve of funds, services will keep humming along.

“We will continue to be able to meet the demand, even if the demand increases,” Gottlieb said. “I would anticipate to see increases but we will also be able to meet the need. I have a very, very hard working team and they’re hearts are in this. They are dedicated to making sure we provide services for better outcomes for the youth and their families.”

Partners plans to implement a monthly giving campaign where the community can issue a monthly donation since other events won’t be able to move forward due to the pandemic.

The 5K’s provide heavy funding support for the Girl on the Run’s annual operating budget. Since the events have taken a hit, Moen Eastham anticipates the nonprofit will get creative to adjust its programming — community support and program revision will be of focus in 2021. There’s potential to take a brief pause during the winter months to save funds, though discussions are in the early stages.

Despite the challenges, the nonprofit won’t waver from its mission.

“Now more than ever, it’s important to remain dedicated to the cause and keep that mentality within our staff and community and make the best out of the situation at hand,” she said.

“ ... We operate on an every girl policy,” she later added, “every girl no matter what they can pay. We lean on our community and help financially, which allows us to keep that policy in place.”

At least for one parent of a Girls on the Run participant, the results are there, exemplified by a note the parent sent to the GOTR staff.

“I truly wish that this group met all year long as a means of building up the girls’ self-confidence, building camaraderie, helping them navigate their big emotions, and helping them discover a lifelong stress management stool. Thanks again for taking this on for them and for us,” wrote the parent.

“That spoke volumes about the dedication that we’ve all had in making sure this program continued even with everything that’s going on,” Moen Eastham said.