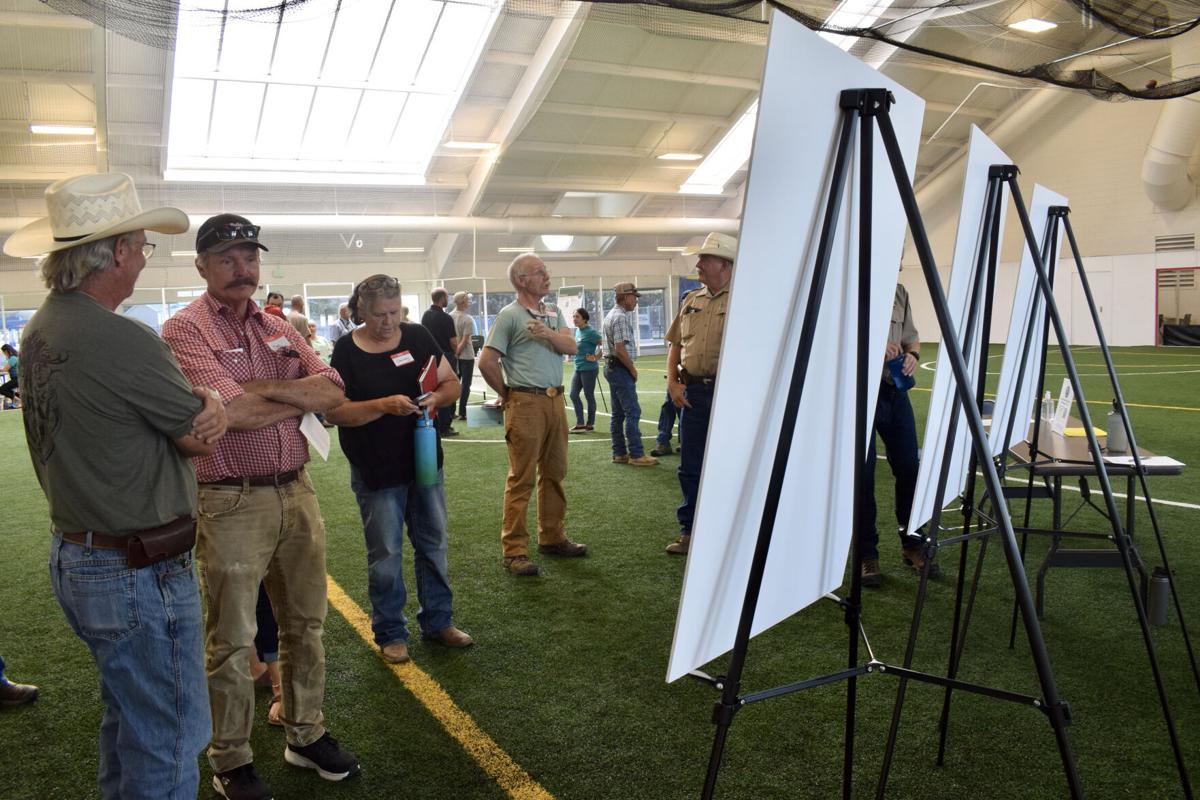 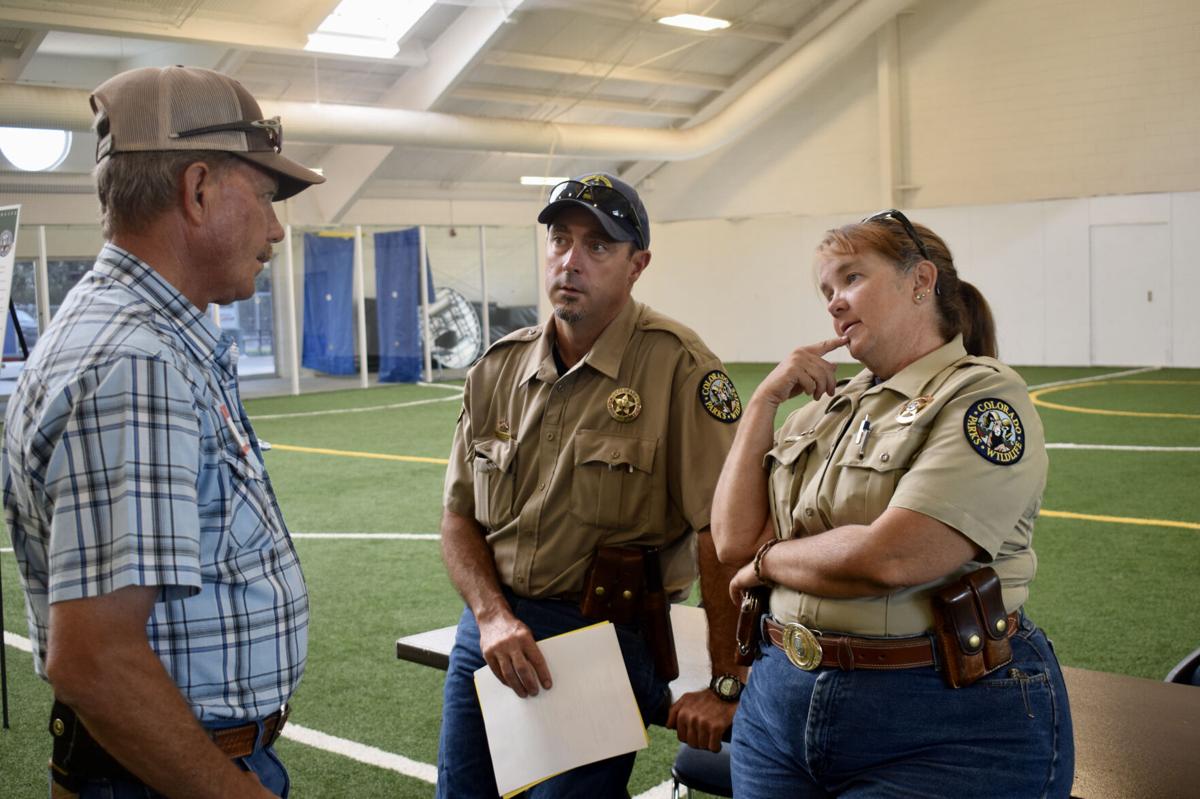 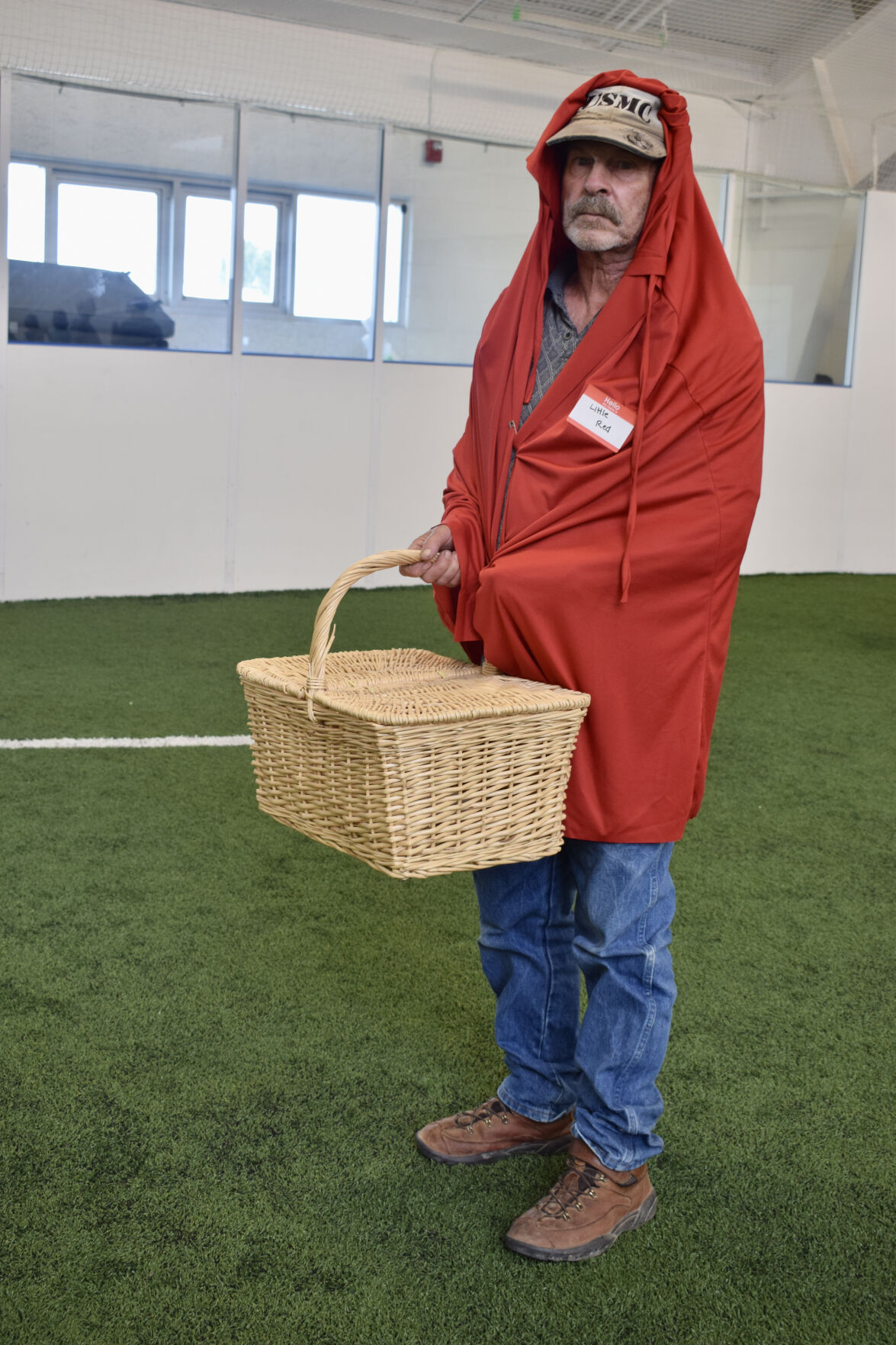 Bill Kaup came dressed as a rendition of Little Red Riding Hood to an open house about the reintroduction of gray wolves at the Montrose Field House on July 21, 2021. (Anna Lynn Winfrey/Montrose Daily Press)

Bill Kaup came dressed as a rendition of Little Red Riding Hood to an open house about the reintroduction of gray wolves at the Montrose Field House on July 21, 2021. (Anna Lynn Winfrey/Montrose Daily Press)

What the gray wolf’s Colorado comeback will look like is yet to be determined, but the state received plenty of input from the Montrose area Wednesday evening.

Many attending the Keystone Policy Center/Colorado Parks and Wildlife open house and input session here said robust compensation is needed for livestock producers who lose herds to predation; for others, worries about hunting and its related economy abounded, and at least one person wanted comparative ecological studies.

One attendee made his point through costume, arriving draped in a crimson cloak and carrying a picnic basket. Bill Kaup let a greeter plaster a stick-on name tag to the cloak — “Little Red,” it said.

“It’s symbolic. It’s a childhood storybook. It’s symbolic of the wolves coming into Colorado,” he said, declining to say what he thought of the species reintroduction — mandated by a controversial law voters passed in 2020 — saying: “I won’t go into the politics of it.”

Proposition 114 requires Colorado Parks and Wildlife Commission to restore and manage gray wolves in the state by the end of 2023. Reintroduction of the species, which was extirpated from Colorado sometime in the 1940s, is to occur on the Western Slope.

Prop 114 also requires hearing on scientific, economic and social considerations; to obtain public input and to use state funds to compensate livestock owners for losses, as well as to help them prevent conflict with the wolf. Colorado Parks and Wildlife teamed up with Keystone Policy Center to hear from residents about how they would like to see the state go about bringing back the wolves.

It was not possible Wednesday for Keystone or CPW to tell anyone precisely where the wolves might end up, or plan specifics — because the plan is being developed and the open houses are part of that process.

“Proposition 114 is law, so what we’re here to do tonight is hear the public’s comments, questions, concerns, to help inform the plan to implement that restoration and management,” said Julie Shapiro of Keystone Policy Center. “There is not a plan right now. What we’re here to do right now as much as anything is to listen to what the public is thinking about. It is a scoping phase that can then help inform development of a draft plan.”

Montrose resident Ralph Files was less reticent than Kaup when it came to talking about the wolf vote, and also said he’s concerned about the economic fallout of introducing another predator onto the landscape.

“I think it’s extremely unfair that we allow people that are not going to be affected by what happens with the wolves to vote,” Files said.

“Montrose County has a $50 million (economic) driver because of hunting and fishing on the Western Slope and that’s in jeopardy. We’re already struggling considerably with deer herds and elk herds. If we add another predator, then that economic (multiplier) is going to be down.”

He also worries that the presence of wolves may discourage visiting hunters from seeking a license here.

CPW agents said that although deer and elk herds aren’t where they were about 15 years ago, they appeared to be OK. The agency is preparing to update the herd management plans for multiple game units, a process that could take a few years and which would involve the public, too.

“The real key is management of predators once they’re introduced to any state,” attendee George Wolff, a volunteer for the Rocky Mountain Elk Foundation, said. Wolff offered his comments in a personal capacity.

“On the West Slope, we see a lot of people who make their living with livestock of various types, so real compensation, not just some preordained number has to take place.”

Wolff said the information being provided for risk reduction “looks like a hell of an investment if you’re a livestock owner.”

Having lived and hunted in Minnesota and Wisconsin, he saw firsthand the drop in deer numbers after wolves were reintroduced, Wolff also said.

Files said he’s not sure exactly how the state would reimburse livestock producers who lose animals to wolf predation. States like Montana and Wyoming are “picky” when it comes to what is sufficient proof of a wolf-kill. “Something has to happen. It (compensation) has to be robust,” Files said, suggesting the compensation process should be generated by farmers, ranchers and their industry associations.

He wants these organizations to meet with the Legislature to establish a reasonable compensation process under the law’s reimbursement provisions for wolf-killed stock. “ … What it really amounts to is you and I get to pay for this … through our taxes,” Files said.

“They’re going to work as hard as they can to keep our deer and elk herds up where they’re supposed to be and still follow the law, whatever it happens to be,” Files said.

Wolves could also migrate to the eastern half of the state, harming agriculture and outdoor industries there, he said. “They have to introduce them on the Western Slope, but so far, there haven’t been any real regulations about them having to stay on the Western Slope,” Files said.

“It’s also going to make a difference in the future, at what level do they maintain the wolf population?”

Not everyone who came Wednesday was opposed to the wolves, which have already been spotted in Moffat County. Just last month, CPW documented the first confirmed litter of wolf cubs in Colorado since the 1940s.

Montrose resident Wayne Quade had hoped to find studies as to the effect of wolf extirpation decades ago, but said such data probably do not exist.

Current and ongoing reintroduction efforts may hold some promise for data of another sort than what is now being put forth, he said: “I would be interested in some of these studies as to how the ecosystems have improved with the reintroduction of wolves.”

Quade believes the reintroduction will occur within the timeframe allotted by the new law. “I think people will find it’s not such a hazard and also that they’ve got a way to control wayward wolves and offer (reimbursement) for the impacts,” he said.

“We’re living in their environment. I don’t think they’re such a hazard to the public.”

“They had a lot of the same questions; the tribal concerns were the same thing too. There’s tribal lands and boundaries and ranches on-reservation and off,” said House, who is criss-crossing the Western Slope for the scoping meetings.

“They’re wondering how everything is going to be drafted, what it’s going to look like and how to be engaged in the process early and make sure that their comments are heard. That’s kind of what we’re hearing across the board.”

Wolves are not aware of political boundaries, House noted.

“The wolf goes throughout the state. It doesn’t know where it’s going, if it’s tribal land, state land, or federal land, the county or private — it’s a good perspective to get all the voices in.”

More information can be found at the wolf restoration and management plan public engagement website, www.wolfengagementco.org.