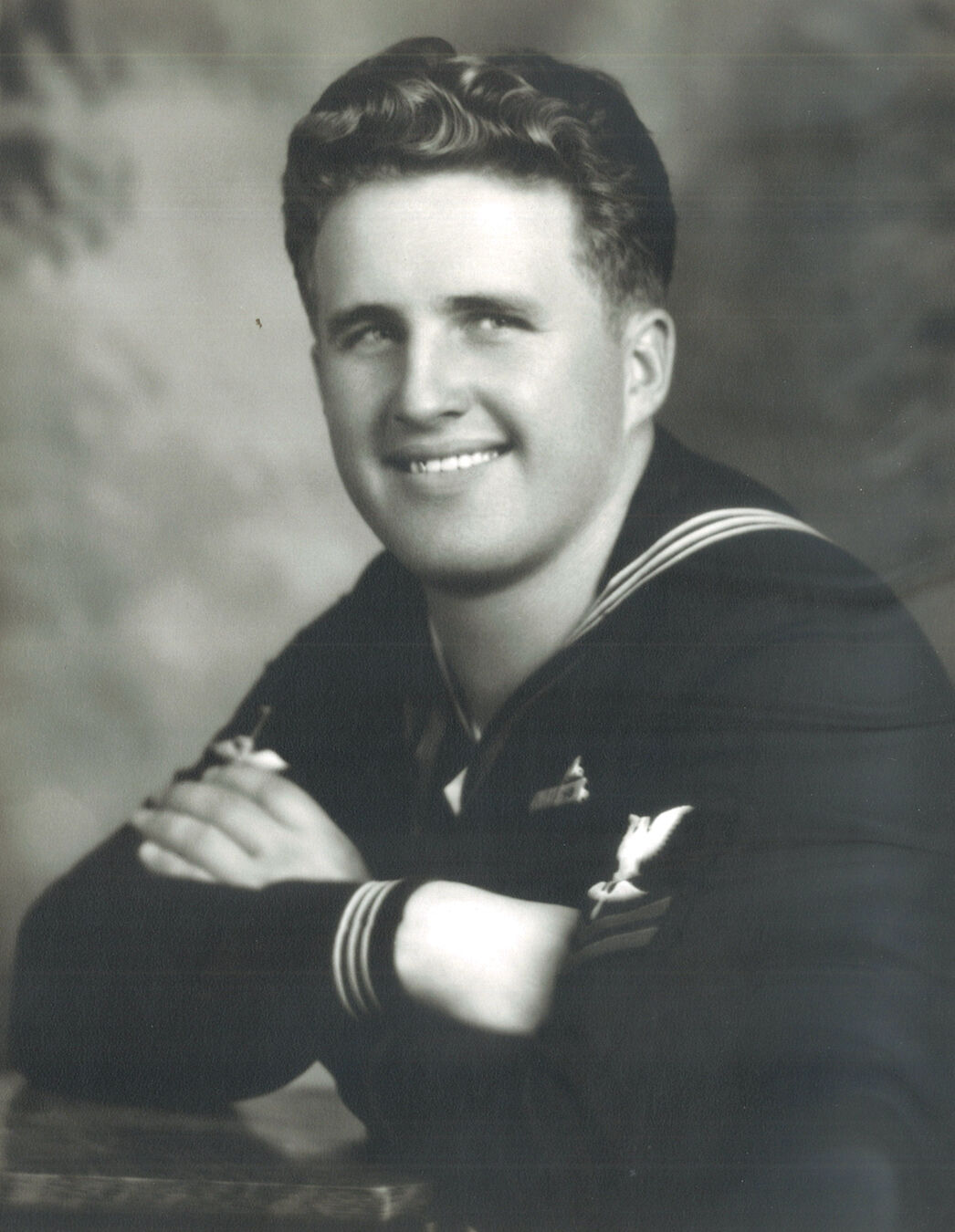 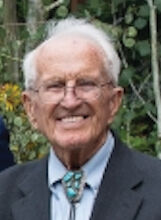 Mack Scarborough passed away peacefully on his 97th birthday, Sunday, Oct. 4, at the home of his son and daughter-in-law, Scott and Marilyn Scarborough in Montrose, Colorado. He felt great pride in living such a long, rich life full of deep love, simple pleasures, family, countless dear friends and honest hard work.

Born to Herbert Earl and Mada (Harris) Scarborough in Sante Fe, New Mexico, his first recollection of life was a cow camp above El Rito in the Canjilon Mountains where the family pastured their cows during the summer. Growing up with a sister and two brothers, one of his main pleasures was picking up pretty rocks and putting them in his overall pockets.

Mack looked to his older brother John for advice, and grew very close to his younger brother Bill, while older sister Kathleen helped to mother them all. He greatly admired his parents and especially his grandfather, T. P. Scarborough. He said his grandfather was a true gentleman, adding, “I always thought, if I could be like him, I would be happy.”

His early memories included life on their homestead at Mesa de Las Viejas. While his dad was gone quite a bit, earning a dollar a day with his team of horses working to build the Chama to Santa Fe Highway, the kids helped their mother to keep their dairy and farm going. At the age of 6, Mack started school in El Rito where most of his classmates were Hispanic, since there were only three Anglo families in town. That gave him an appreciation for the Mexican culture.

Mack remembered the trauma of losing their home to fire and how the young men from the nearby CCC (Civilian Conservation Corps) camp came to their rescue by bringing tents and setting up a temporary home for them.

At an early age, fly fishing was a real joy to Mack. He continued loving it late into life, becoming a real expert at casting a dry fly; a beautiful action to watch. One of his favorite fishing spots was near the big boulders on Vallecito Creek. Many a good fishing story came out of the experiences on this creek! His love for fishing, camping and being in the mountains was a true legacy that he passed down to his next generations.

Mack enjoyed high school where they had a few dances and a movie once in a while, but the best thing about it was meeting Donna Millar who moved to El Rito during their junior year.

“I just liked her from the first day I saw her,” he said.

On Aug. 7, 1942, Mack enlisted in the Navy and was off for boot camp in San Diego to serve in World War II. He underwent training as an aviation machinist mate, then attended Naval Air Gunner’s school in Florida. Stationed at New Caledonia, a French colony by Australia, he served as a gunner and an airplane mechanic.

During Mack’s time in the service, Donna had faithfully written him many letters and he wrote to her as he could. She was able to visit him while he was stationed on Treasure Island near San Francisco after his return to the States. They danced at the famous Trianon Ballroom and took walks down Market Street where he steered her into a jewelry store to buy her an engagement ring. That night they partied at Joe DiMaggio’s popular restaurant on Fisherman’s Wharf.

After serving almost four years, Mack was discharged Jan. 23, 1946, and was able to return home. The following month, on Feb. 14, Mack and Donna were married in the rectory of the Catholic Church in Trinidad, Colorado. After the wedding, they took off in his first car, a 1938 Chevy coupe given to him by his grandfather, and, as Mack put it, embarked on a career that was nothing but joy to him.

They moved to Espanola, New Mexico where Mack worked as a mechanic until securing a job as a pipeline meter inspector with Colorado Interstate Gas. That job took them to Trinidad; Dumas, Texas; Pueblo; then back to Espanola. In each camp they lived, they made wonderful lifetime friends and had great experiences. He loved his job, retiring after 32 years at the age of 57.

Over the years, Mack and Donna built a strong relationship and mutual respect for one another by visiting together. He loved nothing more than going home after work to be with his wife.

He stated, “Communication is what the world needs now among married people … we figured out ways to save; we grew up together and didn’t spend much money … we learned things together … we could talk about things …”

Their son, Scott Kedrick, was born Nov. 28, 1948. He greatly enriched their lives and eventually became the reason they moved to Montrose in 1995 as they wanted to be near Scott, his wife Marilyn and their four daughters.

Mack loved making things out of wood and repurposing old things — taking something that wouldn’t run and making it work again! He and Donna enjoyed gardening together. While in Espanola, they braided together Indian corn ears — also garlic and onions — and sold them. After moving to Montrose, they continued growing green chile, onions, garlic and tomatoes. Their huge array of zinnias in the front yard made their home a show place.

They had so many close friends from all over. Mack considered them all as part of his family. He stated that one of the most important things he learned about life was to listen to people and to be considerate. The highlight of each year for them was their huge anniversary party every February, where all friends were invited to come dance with them to a live band, have refreshments and enjoy!

He was a man who was respected by all who knew him. His wonderful example of a kind and loving husband, father, grandfather and friend meant so much to all his family and friends.

Mack was a member of St. Mary Catholic Church in Montrose where a traditional funeral mass will be held at 10 a.m. on Friday, Oct. 16, 2020. The evening before, Thursday, Oct. 15, a visitation/vigil will take place at Crippin Funeral Home, 802 E Main; visitation beginning at 5; vigil 6 — 7. Immediately following the funeral mass, burial, including full veteran military honors performed by the U.S. Naval Honors Group from Denver, will take place at Grand View Cemetery.

Contributions in Mack’s honor may be made to HopeWest Hospice; 725 S. Fourth St., Montrose, CO 81401. Crippin Funeral Home and Crematory is in charge of arrangements.

To plant a tree in memory of Mack Scarborough as a living tribute, please visit Tribute Store.