Josie Eccher, middle, sits with parents Lori Tucker-Eccher and Doug Eccher as she signs her letter of intent to play college basketball. The senior guard is headed to Rocky Mountain College in Billings, Montana to become a Battlin’ Bear. (Photo provided by Josie Eccher) 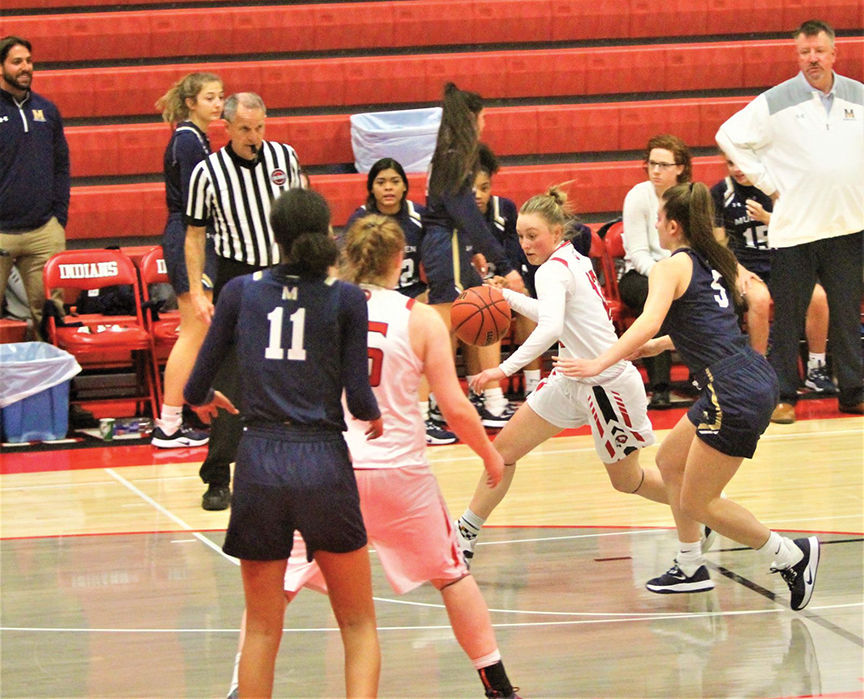 Montrose’s Josie Eccher drives to the basket on March 3 against Mullen at home. Eccher was named to the All-State honorable mention team and is now headed to Rocky Mountain College in Billings, Montana to play college basketball. (Montrose Daily Press file photo)

Josie Eccher, middle, sits with parents Lori Tucker-Eccher and Doug Eccher as she signs her letter of intent to play college basketball. The senior guard is headed to Rocky Mountain College in Billings, Montana to become a Battlin’ Bear. (Photo provided by Josie Eccher)

Montrose’s Josie Eccher drives to the basket on March 3 against Mullen at home. Eccher was named to the All-State honorable mention team and is now headed to Rocky Mountain College in Billings, Montana to play college basketball. (Montrose Daily Press file photo)

Now, the All-State honorable mention is headed back to Montana. This time, she’s joining the college ranks, accepting an offer to play at Rocky Mountain College, part of the National Association of Intercollegiate Athletics (NAIA), in Billings, Montana.

The senior guard chose Rocky over 10 other schools. After receiving the offer in the fall and taking some time to enjoy her senior season, the decision started to become clear. A chance to play in the Frontier conference for a coaching staff that supports player development was the right fit, Eccher said.

“[Rocky] is the best fit for me academically, financially, and athletically,” Eccher said. “The Rocky coaching staff is focused on developing me as a player as well as a person. I can become a much better basketball player and there is still a lot to learn about the game. Rocky is committed to helping me do that.”

A love for the outdoors helped, too.

“I’ve always loved the outdoors,” she said. “I love to fly fish and hike and be in the mountains. The chance to be in Montana doing that sounded like an awesome opportunity to me.”

Eccher just completed her senior season at MHS, and led the Lady Indians in three-pointers made with 39 and was third on the team in scoring (6.8 points per game).

After the season, she earned first-team honors in the Southwestern League, and was named an honorable mention All-State. She led the SWL in three-point shots made over the last two seasons, totaling 89 for her career.

“We’re certainly excited she has the opportunity to play at the next level,” said Steve Skiff, MHS girls head basketball coach. “She really improved her game throughout her high school career. Her game will transition well to the next level.”

Eccher said she’s been playing basketball since she was three years old. She saw her older brother, Franklin Eccher, play and her father, Doug Eccher, coach.

She wanted to be included.

“She was relentless,” said Doug, who coached Josie through the eighth grade. “Practicing, shooting, practicing ball handling, practicing things that we had shown her. You didn’t have to ask her to go practice them. She would be in the garage practicing or out on the basketball court.

“I tried to give her good fundamentals but it was really her development at that point that really took off.”

Eccher’s fundamentals and quick release are a reason her former coaches, and future coach, believe she has the chance to adapt to the college game, which is known to have a faster style of play.

“She can shoot off the dribble, she can catch and shoot, she can create separation,” Doug said. “In the college game, everything speeds up. You can’t waste time. You have to be very efficient.

“I think that’s what the [Rocky coaching staff] liked about her shot fundamentally, the fact that she could get it off quickly.”

“She’s a really great shooter,” Skiff said. “She understands the game of basketball, which is what a lot of college coaches look for.”

"We were impressed with Josie's shooting ability, especially her quick release, when she made her visit to Rocky last fall," said RMC head coach Wes Keller in a press release announcing the signing of Eccher. "She is a good athlete who plays hard on both ends of the court.

“Josie really connected with our current players during her time on campus and there is no doubt she will have an excellent academic and athletic career as a Battlin' Bear."

Eccher mentioned she’s received great support from her parents, Lori Tucker-Eccher and Doug, and thanked the many coaches and teammates who helped her develop as a basketball player and person.

In addition, she’s proud of how the Montrose community supports girls basketball.

“I remember my junior year, it was the Elite Eight game against Mullen High School, and it was packed,” Eccher said. “The community comes out and supports, and that’s really exciting. We did get crushed, but the community was there and supporting. There was a line out the door, and that’s a good illustration of how our community really respects women’s basketball here.”

Eccher said the Rocky coaches have already prescribed offseason workouts. Although the current pandemic limits her ability to train at the gym, Eccher is getting creative to stay in shape, work on her game, and get ready for her freshman year.

Although she understands there may be some challenges in college play, she’s looking forward to the process as she works through her offseason training.

“I think the game will be going a lot faster, so I’m going to have to really adjust and work hard in the offseason to become faster and stronger,” she said. “One thing I've worked really hard for is being a decent shooter. I know I’ve got a lot of work to do, but it does give me some confidence.

“It’s definitely going to be a learning experience. I’ll be out of state away from home so I’m going to grow a lot but I’m also looking forward to the growth and the process that it’s going to take to be successful.”

Eccher finished high school with a 3.9 GPA and plans to pursue a bachelor’s degree in environmental science.