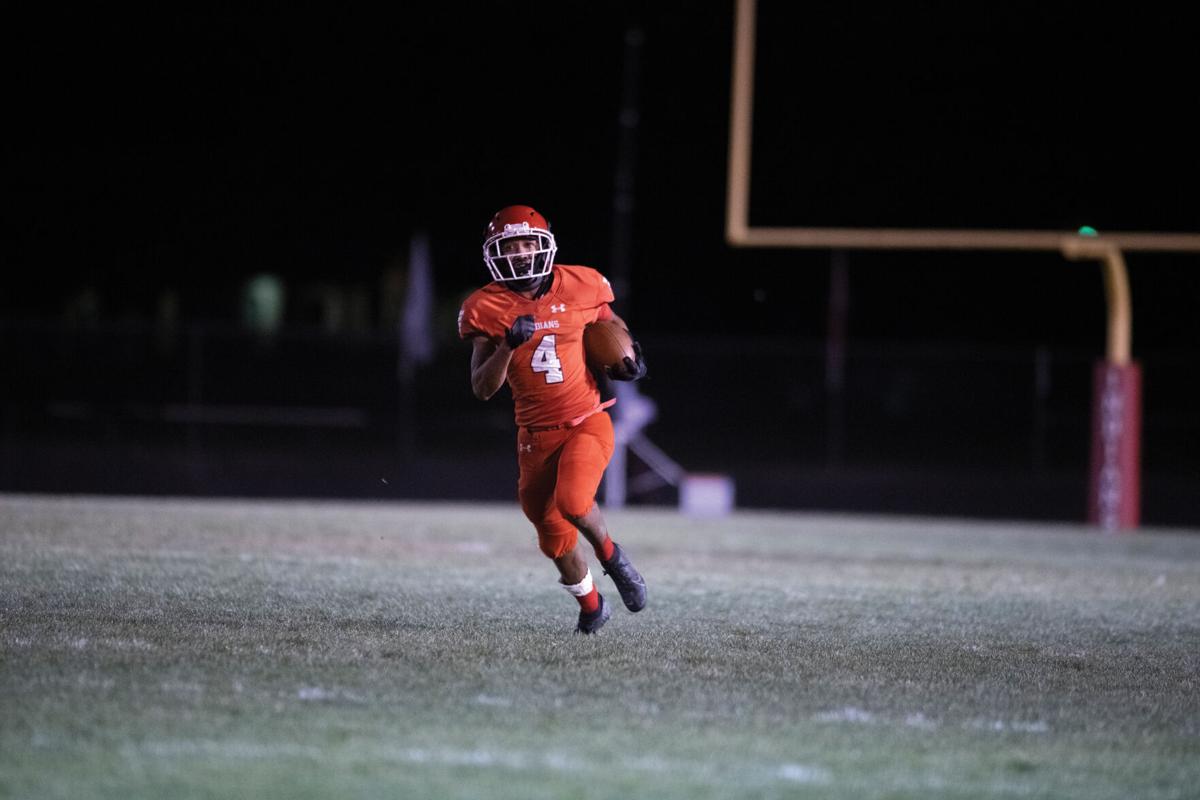 Montrose running back Eli Evans runs down the field late in the third quarter during a game against Chatfield on Friday, Oct. 9, 2020. 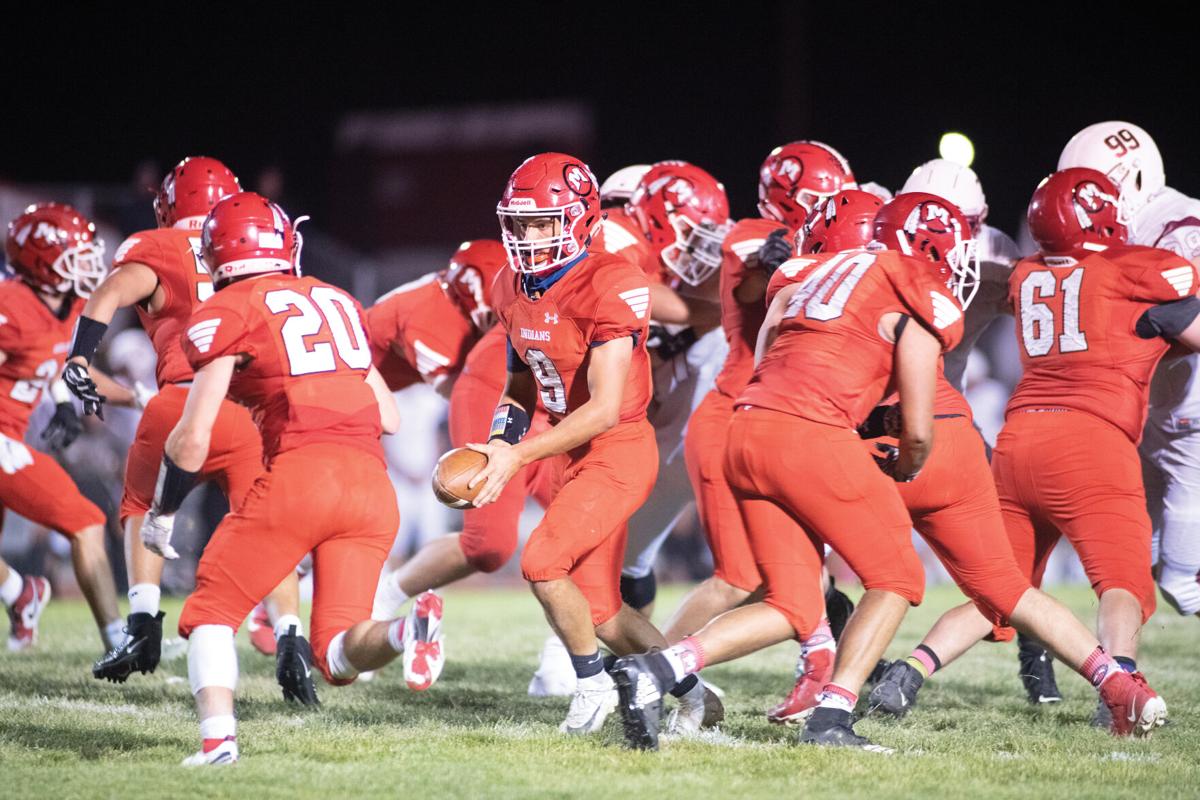 Montrose quarterback Keagan Goodwin hands the football off to running back Trent Blundell during a game against Chatfield on Friday, Oct. 9, 2020. (Josue Perez/Montrose Daily Press) 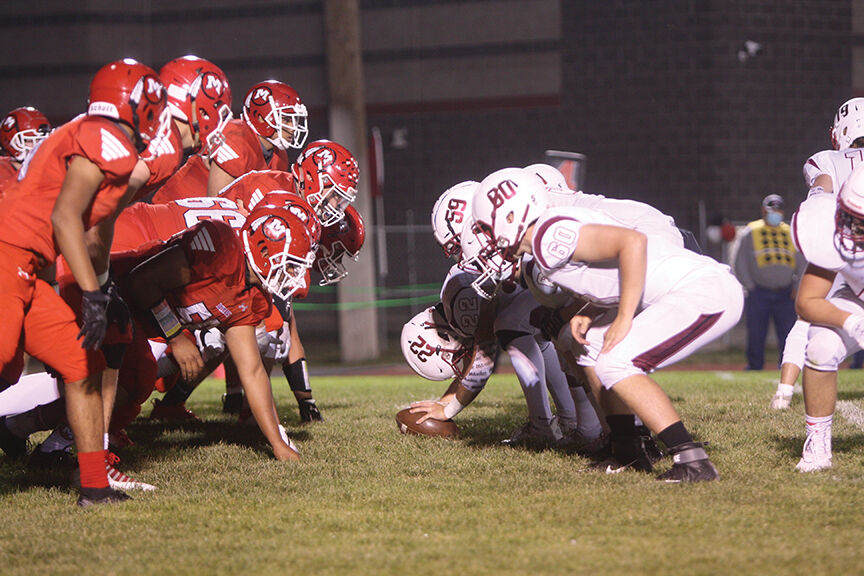 Montrose running back Eli Evans runs down the field late in the third quarter during a game against Chatfield on Friday, Oct. 9, 2020.

Montrose quarterback Keagan Goodwin hands the football off to running back Trent Blundell during a game against Chatfield on Friday, Oct. 9, 2020. (Josue Perez/Montrose Daily Press)

Coming out of the first half, Montrose High School was set on sending a jolt to the Chatfield sideline. The score was 13-6, and the Indians’ running game had yet to find its rhythm.

That narrative changed when junior Tayne Ila ripped a 50-yard gain seconds into the second half to get MHS into Charger territory. A few plays later, Ila took a 28-yard scamper into the end zone.

“We talked about it at halftime — we needed to go score and take control of the game and that’s exactly what we did there that first drive of the third quarter,” MHS coach Brett Mertens said after the game. “We were able to go up by two scores and the [offensive] line really asserted their will late in the game.”

The score was one of six rushing touchdowns Montrose (7) had on the night in the season and home opener, a 43-12 win against the Chatfield Chargers (10). The combination of Trent Blundell, Ila, Ethan Hartman and Eli Evans pummeled the opposition Friday night as the four combined for five scores on the ground.

“We just got a nice little committee,” Mertens said. “We literally have seven backs that we like and we’re just going to keep rotating them and keep them fresh.”

The Montrose runners consistently ripped off chunk gains, including a 47-yard run from Ila late in the third quarter and a 37-yard dash from Evans that set the Indians up for their second score halfway through the second.

“They just grind all day, everyday,” said Blundell of the Montrose offensive line, who gave the running backs consistent gaps throughout. “They’re savages. Those are our dogs. When we need them, they have our back always. I dedicate all my yards and touchdowns to them. They’re the whole reason our offense does what it does.”

Mertens said prior to Friday’s home opener the Indians would utilize a committee approach in the backfield. It’s a game plan that excelled last season, one where the Indians rushed for 4,540 yards and had four backs who exceeded 50 carries.

“That’s what we’re going to do,” Mertens said. “Pound and pound and pound, and it may look like we’re only going to get three or four, but every once in a while there’s a seam and we go and get a big one.”

Facing a 2nd and 20 and near their own end zone, Chatfield quarterback Ethan Delfino ran into trouble late in the third quarter. Indians lineman Raul Rascon pushed the edge and pressured Delfino into a drop back. Rascon jolted Delfino, who coughed up the ball, which trickled into the end zone. Chatfield running back Jake Marschall picked up the ball, but he was tackled by Blundell and brought to the ground to give the Indians a safety and a 22-6 lead.

“I saw the guard drop back into pass so I knew it was a pass. I was just trusting my keys and I saw him roll out to my side and I just got that gut instinct to go after the quarterback,” Blundell said.

Though Montrose dominated after the second half on, scoring 16 unanswered, it was Chatfield who scored first after a 5-yard plunge from Marschall. The Chargers were unable to convert the PAT as Blundell swooped in for the block, his first of two blocked PAT attempts on the night.

Montrose quickly answered on their first drive of the night. After a pair of gains from Blundell to set the Indians up at the Chatfield 43, senior Keagan Goodwin took the option and sped to the right, scampering 43 yards untouched into the end zone to knot the score at 6-6.

The run was the first of many for an Indians team that not only found space through the gaps, but consistent openings on the outside.

“It’s not even just the lineman,” Ila said. “The offensive line is so good, but everyone is just working together. Receivers, quarterbacks, other running backs. Just good fakes and good blocks.”

The running game wasn’t the only component for Montrose that shined. Though Marschall and Chatfield senior Mason Lowe found some running room early, the Indians clamped down and eliminated middle gaps, forcing Marschall to the edge in the latter portion of the contest where no running room was available.

MHS made it tough on Delfino, too, who was pressured by senior Raul Martinez, Blundell, Rascon and middle linebacker Bode Greiner throughout. Following the series where Montrose forced an intentional grounding penalty on Delfino, Goodwin leaked over the middle and intercepted Delfino at the Montrose 30.

The Indians capitalized on the miscue. Later in the series, following an 18-yard run from Hartman, Ila punched it in from two yards out to give Montrose their first lead of the night, 13-6.

Blundell scored his first touchdown of the night late in the third quarter and added a second in the fourth. Evans later scored from 12 yards out to add to the onslaught.

Montrose moves to 1-0 and heads to Stocker Stadium in Grand Junction next Friday to play Fruita, the first game of conference play.

The successful night was one in the making for MHS, a team anxious to return to the field after months of uncertainty.

“We all did it for this,” Ila said. “We’ve been working our butts off and it’s just so nice to come out here and do so good.”

“For us to get out here and do what we love, it’s a blessing. Can’t beat anything like this,” Blundell said.