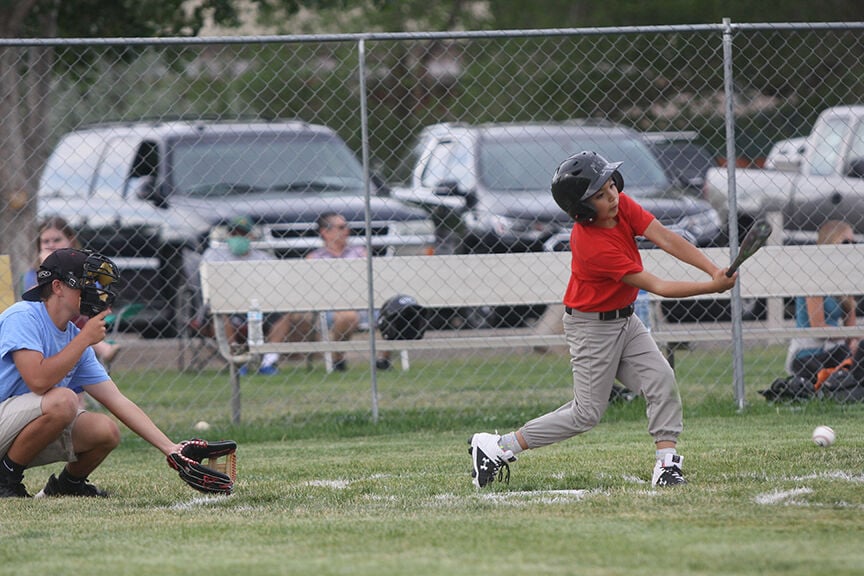 A youth baseball player takes a swing during a game at the McNeil Fields in Montrose on Tuesday, July 21, 2020. 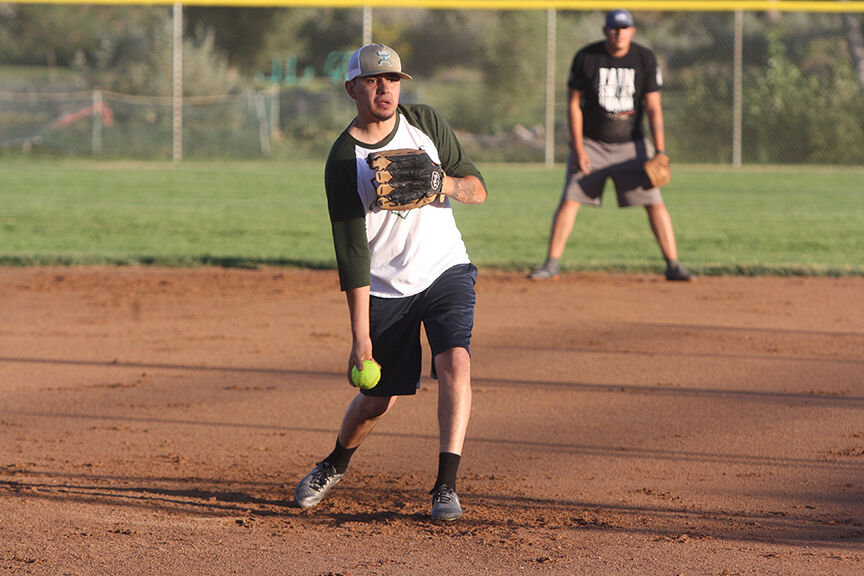 An adult softball player throws a pitch during a game at the Ute Fields in Montrose on Wednesday, July 22, 2020. 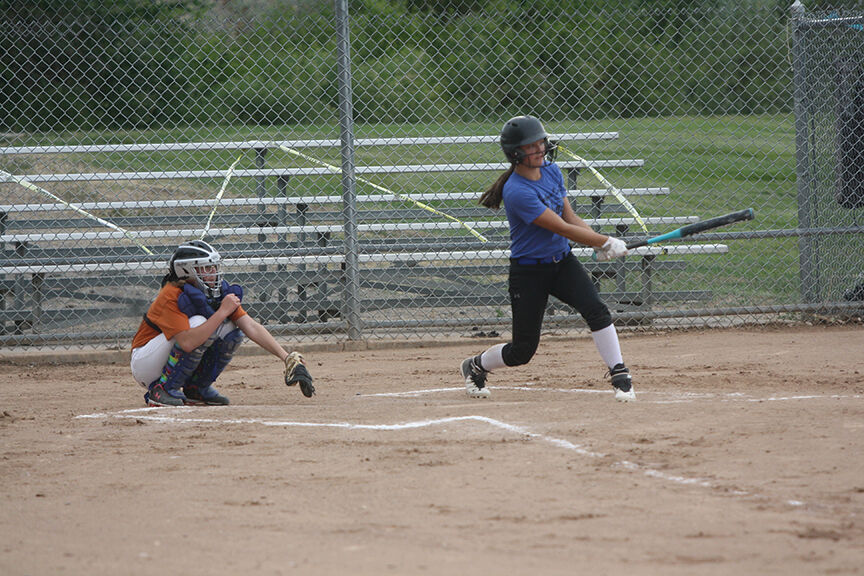 Lily Sinkay, softball player for Surface Creek Chaos, follows through on her swing, moments before her home run. 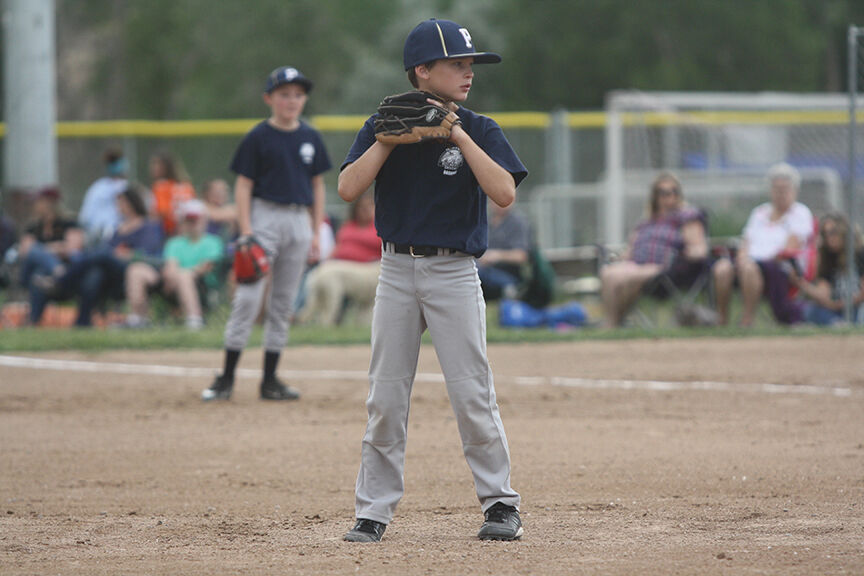 Bryce Good pitching for Olathe during a game against Cooper Soils on Tuesday, July 21, 2020.

A youth baseball player takes a swing during a game at the McNeil Fields in Montrose on Tuesday, July 21, 2020.

An adult softball player throws a pitch during a game at the Ute Fields in Montrose on Wednesday, July 22, 2020.

Lily Sinkay, softball player for Surface Creek Chaos, follows through on her swing, moments before her home run.

Bryce Good pitching for Olathe during a game against Cooper Soils on Tuesday, July 21, 2020.

With COVID-19 looming, wondering if there would be a summer youth sports season was at the forefront of the minds of Montrose Recreation District staff at the beginning of this summer. But after some timely and responsible planning, Western Slope youth were able to return to the diamond.

Youth baseball and softball have been played in Montrose this past month, with teams across the Western Slope squaring off for some friendly competition at McNeil Fields near Riverbottom Park. The timely planning from Montrose Recreation District staff allowed kids at all levels — coach pitch to AA baseball — to take the field and play the two sports after experiencing an unusual spring, and a later start to the summer season.

“People appreciate the sense of normalcy,” said Justin Mashburn, youth recreation coordinator for MRD. “We made some sacrifices for the good of the kids.”

At one point, there wasn’t going to be a season at all, said Matt Imus, recreation/marketing leader for MRD. After further discussion, staff came together and were able to organize the six-week season in 10 days.

“From going to not thinking we could play, to actually playing, we’re happy to do it,” Mashburn said.

An abundance of safety protocols are in place among participants and staff at the fields. Every team has their own set of baseballs, and each player has their own helmet and bat. Equipment is disinfected between games. The additional cleaning and eye for safety has meant more hours for MRD staff, but it’s nothing MRD wasn’t willing to do. “Sacrifices were made for the good of the kids,” Mashburn said.

Coaches have taken on a much larger role, helping space the players out when needed, making sure players refrain from sharing and additional tasks to maintain safety and abide by protocols in place. It’s required some reminding, but nothing extreme.

The return of both sports provided some memorable moments for parents and players, including Lily Sinkay, a softball player for Surface Creek Chaos. Sinkay, during a game last week, stepped up to the plate with runners on base, and unleashed a swift swing, launching a home run over the fence in left field.

Her teammates in the dugout — some wearing masks — roared with cheers and flocked to home plate to congratulate Sinkay, who couldn’t help but smile after finishing her trot around the bases.

“This means a lot to them,” said Surface Creek coach Christine Many. “The sisterhood they have is so needed.

“They really missed it. It’s great to be back together. The girls worked so hard.”

A game against Cooper Soils and Olathe featured similar exciting antics. After an Olathe player batted a ball through the hole, a teammate raced around third and scored in what was a close game between the teams. A smile burst onto his face as he shimmied his way back to the dugout, where he was greeted by his teammates, who celebrated as expected after waiting so long for their season.

Parents cheered on the kids at the games, offered words of encouragement and appreciated being able to see the kids play with safety a priority. One parent spectator said “it was great to be out here and see them have fun after being cooped up for so long.”

“It’s a very fun feel,” Mashburn said. “Parents and coaches are really into it.”

The rec has been able to host teams from Delta and other areas where a summer league wasn’t available. The total — ranging T-ball to adult softball — is 48 teams. Some teenagers, who expected to play at higher levels this summer, are playing down a level, something Mashburn was worried would be difficult for them, but the players are abiding by the rec philosophy, and seem happy “just to be playing,” he added.

Adult softball has been underway, too. For the first few weeks, no spectators were allowed at the fields.

Since then, restrictions have loosened slightly. The rec district has asked players to socially distance while in the dugout, and fans must wear a mask while entering the Ute Fields area. Also, by getting teams in and out, the rec district can host six to eight games a night.

Other than the protocols, everything has largely felt the same, Imus said. Players are smacking home runs, trading jabs, and enjoying a summer of competing after wondering if they’d be able to participate in the popular summer activity.

Although baseball was able to enjoy a short season and will wrap up this week, other sports are to be determined for a return to play, including basketball and soccer. A fall season for rec soccer is up in the air, Mashburn said, since the closer contact works against the overall plan to keep a safe environment.