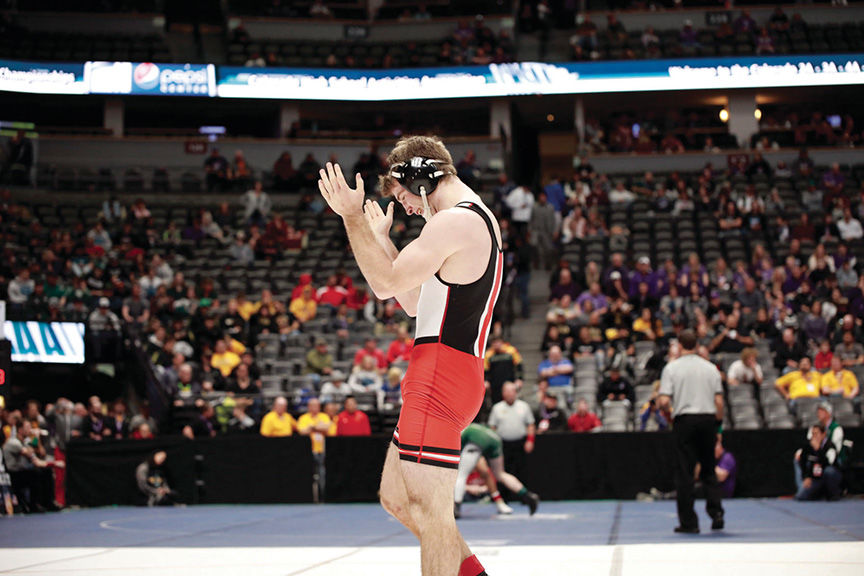 Montrose senior Ben Robuck celebrates his third-place win on Friday, Feb. 21, at the CHSAA state wrestling championships. Robuck was one of four placers for Montrose. The team placed eighth.

Montrose High School senior Ben Robuck stands on the podium at the Pepsi Center in February after the 2020 CHSAA State Wrestling Championships. Robuck placed third in the 170 pound weight division. He accepted a scholarship offer to join the wrestling program at Colorado Mesa University.

Montrose senior Ben Robuck celebrates his third-place win on Friday, Feb. 21, at the CHSAA state wrestling championships. Robuck was one of four placers for Montrose. The team placed eighth.

Montrose High School senior Ben Robuck stands on the podium at the Pepsi Center in February after the 2020 CHSAA State Wrestling Championships. Robuck placed third in the 170 pound weight division. He accepted a scholarship offer to join the wrestling program at Colorado Mesa University.

Montrose High School senior Ben Robuck arrived at the Pepsi Center back in February, determined to win a state championship in the 170-pound weight class in 4A. Armed with a 43-7 record and a first-place finish at regionals, the opportunity was there to capture a coveted title.

After defeating sophomore Carter Bergman in the first round, Robuck’s title pursuit ended in the quarterfinals when he was defeated by senior Emilio Chavez of Mead High School by a 7-1 decision.

The loss cemented a decision Robuck had felt brewing within. Although an All-State player in football, he would wrestle at the collegiate level.

“I just left like, at state this year, it didn’t really go how I wanted it to go,” Robuck said. “So I felt like there was some unfinished business.”

“I think the fact that he didn’t win state ended up giving him more motivation to continue wrestling,” Mike Robuck, Ben’s father, said.

Robuck received an offer from Colorado Mesa University (CMU) in Grand Junction to continue his wrestling career. The opportunity to wrestle collegiately, and study in a strong medical program, was what Robuck was looking for, so he accepted the offer.

“I was real excited when I got the offer,” Robuck said. “After state, I decided that I wanted to continue wrestling and I felt like CMU was the best place when they offered that scholarship. I definitely got real excited.”

“I think it’s a good opportunity for him,” Mike said. “That’s a program that’s really started to do well, especially over the last few years. I believe they’ve had an All-American the last nine seasons. I’m glad he’s continuing his wrestling and I’m grateful we’ll be able to watch him at some point.”

“I’m glad he did. His work ethic and his strive to be better is going to get him a pretty long way in this sport. I’m glad he gets the chance to go up there and give it a go.”

Glimpses of that work ethic could be seen at the state tournament when Ben shook the sudden loss and rattled off four straight victories, with the last match featuring Robuck against Chavez in a rematch. Robuck avenged his earlier defeat to secure a third-place finish.

“I think taking third was what showed what Ben can really do,” Samples said. “He could have just quit at the state tournament after losing that match. Instead, he came back and dominated the rest of the tournament, didn’t even have a close match, wrestled like we all knew he could. It was very impressive.”

Robuck sports a lengthy resume, to say the least. He finished with three varsity letters in football, was named First-Team All-Conference twice and received an All-State selection his senior year.

For wrestling, he sports four varsity letters, was a three-time state qualifier and nabbed two top state finishes. In addition, he was selected as an All-State honorable mention for the 2019-2020 season, and earned All-Conference honors.

“Ben is very knowledgeable with wrestling,” Samples said. “He understands positioning pretty well. Positioning and leverage is a big part of his game.”

“His work ethic and ability to push himself outside of the practice room, he did a lot of extra work that kids don’t do,” Samples added.

Robuck will have to take that mental drive to CMU. Mike has followed the Rocky Mountain Athletic Conference (RMAC) closely, the conference CMU plays in. The college level is always different in every sport, and CMU’s team already boasts some talented wrestlers, Mike said.

So what can Ben expect as he makes the leap to the college ranks?

“It’s almost a different sport altogether,” Mike said. “College wrestling is more deliberate. A lot of times college wrestling comes down to somebody making a mistake, and another guy takes advantage of that mistake.”

“The advice I would give him is to keep his head up,” Samples said. “It’s going to be rough sometimes. It’s a different level of wrestling and you gotta understand it’s a learning curve. Make sure to stay positive.”

Ben, of course, is ready and motivated.

“It’s a lot tougher, and there’s no more scrubs. There’s only state champions, high level athletes and that’ll be a good challenge for me.”

Not every high school student-athlete gets to make the leap to the collegiate level. Robuck recognizes that, and is motivated to start another journey is pursuit of a championship.

“This offer really means a lot to me,” Robuck said. “A lot of athletes stop pursuing their dreams after their high school career is over. I really understand and appreciate how lucky I am that I’m able to continue doing something I love.”