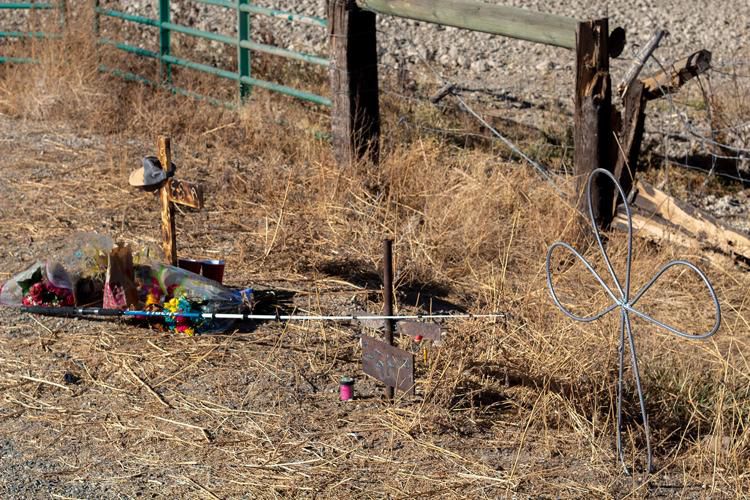 A memorial marks the site of the November 2019 crash that killed Delta High School student Gannon Hines and injured two others.

A memorial marks the site of the November 2019 crash that killed Delta High School student Gannon Hines and injured two others.

Charges of vehicular homicide have been filed in the November crash that killed Delta High School student athlete Gannon Hines, 18, and injured others.

Ledesma, who was allegedly driving when the vehicle bearing him, Hines and others rolled near E Road in Delta County, is charged with reckless vehicular homicide in Hines’ death. He is also charged with two counts of reckless vehicular assault causing serious bodily injury for injuries sustained by Dairo Barrios Oelke and Shad Lewis, according to the complaint, which was filed April 10 and announced Thursday.

Conviction of the vehicular homicide could bring two to six years in prison, or more, if aggravating circumstances are proved. The sentencing range for vehicular assault is one to three years in prison.

The District Attorney’s Office reminds the public that charges are accusations, not proof, and Ledesma is presumed innocent.

Ledesma was issued a summons rather than arrested, in part because of restrictions resulting from the COVID-19 pandemic that are also affecting local courts.

Ledesma is due in Delta Combined Court on June 3.

Ledesma was allegedly behind the wheel of a 2019 Subaru on Nov. 9, one that investigators suspected was traveling at a high rate of speed down E Road, when it went off the road, up an embankment, hit several fence posts, and rolled several times.

“These charges were brought after an extensive investigation by the Colorado State Patrol and Delta County Sheriff’s Office,” the Thursday announcement from the District Attorney’s Office reads.

“The investigation included an analysis of the crime scene, use of electronic and other data from the involved vehicle, and interviews with the victims and witnesses.

“Our condolences go out to the family of Gannon Hines for the loss of a son and family member, and we express our hope for the complete recovery from the serious injuries suffered by Dairo Oelke and Shad Lewis.”